A U.S. Navy hospital ship docked off the coast of Colombia is treating refugees from Venezuela amid a spiraling migrant crisis in the region.

The USNS Comfort has taken hundreds of patients on board during a four-day mission of health care relief, treating Venezuelan refugees and Colombians who have found their country’s medics unable to cope with the pressure.

Some three million Venezuelans have fled their country’s economic and humanitarian crisis since 2015 and the U.S. government has linked the country to the migrant caravans which have been fiercely criticized by President Donald Trump.

Migrants on the hospital ship were yesterday undergoing surgery for everything from tooth extractions to hernias. 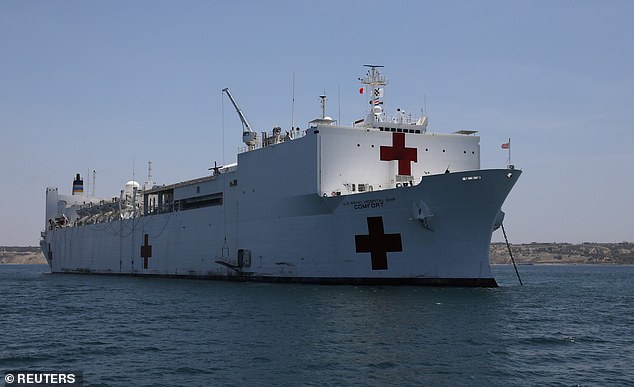 The USNS Comfort, pictured earlier this month, has taken hundreds of patients on board during a four-day mission to treat Venezuelan refugees and Colombians 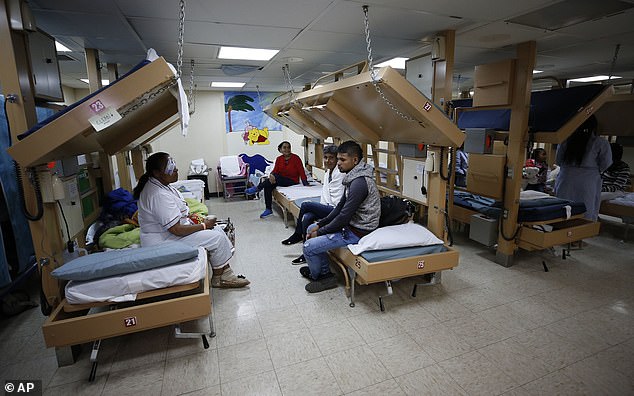 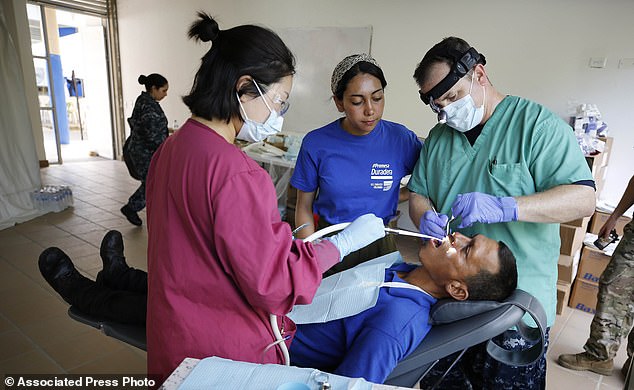 Elvis Trazadania, from Venezuela, receives dental treatment from doctors working out of the USNS Comfort hospital ship in Colombia

The ship’s trip to Riohacha is part of a larger 11-week tour to several Latin American countries heavily impacted by the exodus of Venezuelans.

Many of the migrants are driven to flee by lack of access to medicine and treatment in their home country.

One patient, Niurka Roldan, said she left Venezuela with several decaying teeth and a jaw abnormality that she was not able to treat.

During her two years in Colombia, she said she has struggled to make ends meet, let alone afford dental care.

‘It was very frustrating not to be able to do this in my country, nor in Colombia,’ she said.

In the first day of service on Monday, physicians tended to more than 700 patients and completed 39 surgeries.

Captain Kevin Buckley said dental surgeries and operations to remove cataracts and hernias are among the most common procedures being performed. 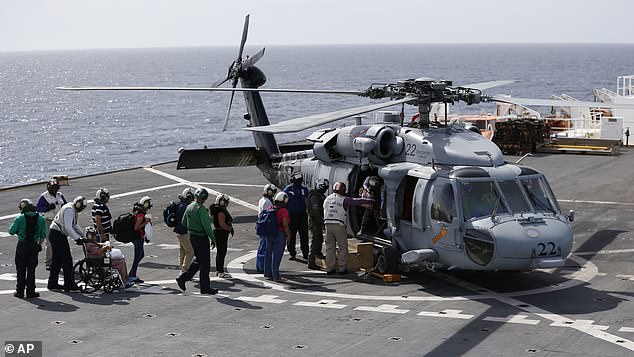 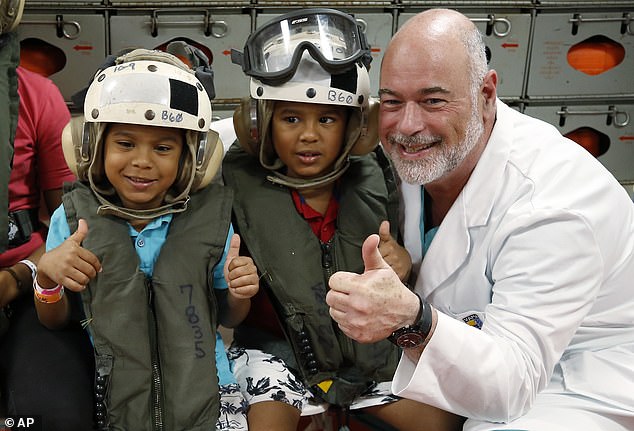 A member of the crew of the hospital ship USNS Comfort poses for a photo with Colombian patients Sebastian Moscote, left, and his brother Said after hernia surger 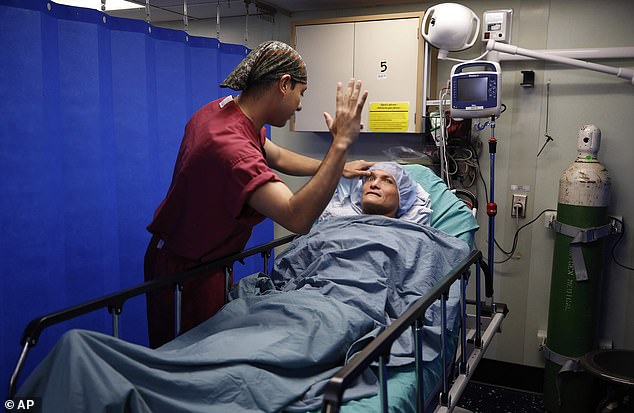 A U.S. doctor from the USNS Comfort hospital ship examines Colombian national Oscar Ovalle before cataract surgery, on board the vessel which has taken hundreds of patients on board

‘I feel like I’m a father watching my kid ride a bike for the first time,’ he said of the joy of watching patients see and live without pain again.

Socialist party leader Diosdado Cabello has likened the U.S. ship to a ‘Trojan horse’ designed to generate fear among the Venezuelan population.

Venezuela’s government allowed a Chinese hospital ship to visit the country in September, but generally denies that a humanitarian crisis is underway.

Vice President Mike Pence said he had been told by Honduras’ president thatthe caravan moving towards the U.S. was being organized by leftists financed by Venezuela.

Between 2017 and 2018, the number of emergency room visits by Venezuelans in Colombia has increased by 202 per cent, according to officials.

The vast majority have no medical insurance and must go through a lengthy process to qualify for treatment of chronic conditions.

According to Colombia’s National Institute of Health, over 2,000 Venezuelans have died thus far in 2018 from illnesses including malnutrition, malaria and transmittable diseases, among others – up from 863 such deaths in all of the previous year.

Facebook issues an apology for removing nude Cosmo photos of Burt Reynolds from tribute posts
Cher, Britney Spears and Kourtney Kardashian among the luckiest stars in LA
Merkel vows Germany will keep pushing for 'global solutions'
The world's happiest countries REVEALED: Finland comes top while South Sudan is the bleakest
Jussie Smollett is not in the clear just yet and he could still face federal charges
Two gunmen 'opened fire', killing one person and injuring 11 at a Playa del Carmen restaurant
Supreme Court: Wilbur Ross LIED about why 2020 Census should ask if people are citizens
Jeffrey Epstein drugged and raped a 13-year-old girl, new lawsuit claims