A huge mass beaching of up to 145 whales has been discovered on a remote island beach after two entire pods strand themselves – and no one knows why they did it.

The pilot whales were found by a hiker at Mason Bay on Stewart Island, off the southern tip of ‘s South Island on Saturday.

The hiker notified the Department of Conservation at 10.30pm and told them there were two pods of whales stranded at the southern end of Mason’s Bay, approximately 2km apart. 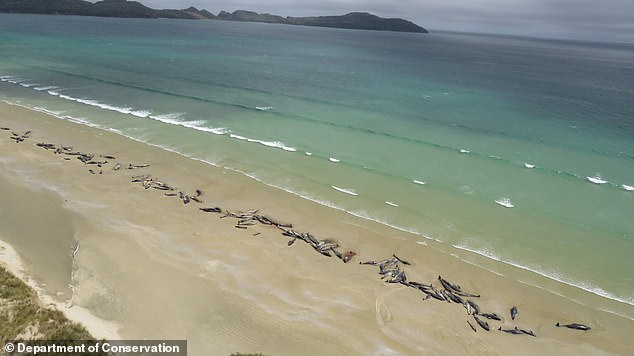 Department of Conservation Rakiura operations manager Ren Leppens said that half of the whales had already died by the time they were found and the decision was made to euthanise the remainder due to the remote location.

‘The likelihood of being able to successfully re-float the remaining whales was extremely low. The remote location, lack of nearby personnel and the whales’ deteriorating condition meant the most humane thing to do was to euthanise,’ he said.

‘However, it’s always a heart-breaking decision to make.’

WHY DO WHALES BEACH THEMSELVES?

In short noone knows but theories include:

Toxic algae blooms:  Along with viruses can cause mass sickness in pods and the animals may be too sick to swim.

Shipping and military sonar interference: This can scare the animals and cause distress and even decompression sickness as they swim to the surface.

Mass suicides: There is little evidence to support this theory.

The Department of Conservation responds to about 85 whale strandings every year, mostly of single animals, this incident of such a large number of whales is rare.

Although there are many theories as to why whale beachings occur, no one has been able to find a definitive answer.

‘There are many reasons and little clarity as to the major culprit, but there are some patterns,’ Australian Geographic wrote in 2016.

Some of the theories include navigational errors, toxic algae blooms, shipping and military sonar interference, and even mass suicides.

It is the third case of whale strandings in New Zealand in the last week with 10 pygmy killer whales stranded at Ninety Mile Beach and a 15m sperm whale at Tokeroa Beach.

Mac Miller dead at 26: Rapper said overdosing was 'just not cool'
Michael Palin granted unique access to North Korea for latest show
Woman charged after knife rampage at illegal Chinese maternity center where she worked
Incredible moment a woman swims with a baby humpback as its mother lurks beneath the surface
Left-wing activist arrested for throwing choc milk on Republican volunteers and calling them Nazis
Oscar nominations 2019: Roma and The Favourite lead pack with 10 nods
Police banned from displaying thin blue line' flag because it's 'dismissive' of Black Lives Matter
Duck Dynasty star Willie Robertson's home is sprayed with bullets in a drive-by shooting in daylight