Obama was speaking on Saturday before thousands of people at TD Garden in Boston, where she was promoting her just-released memoir, Becoming.

The former First Lady was asked by the host, Michele Norris, about the transition from the Obamas, who were on their way out of the White House, to the incoming Trump administration, according to .

Specifically, she recalled Trump’s inauguration in January of last year, noticing that there were a few things that were different from her husband’s inaugurations in 2009 and 2013. 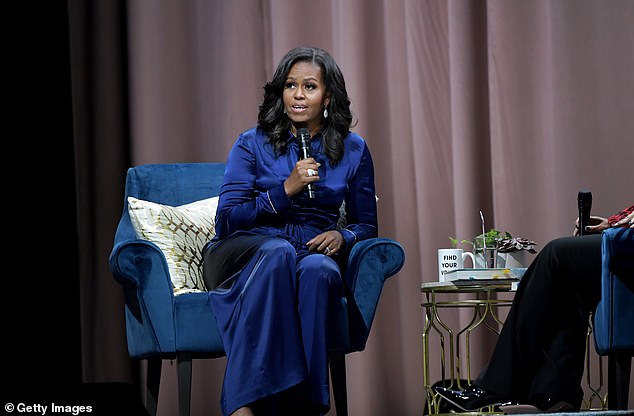 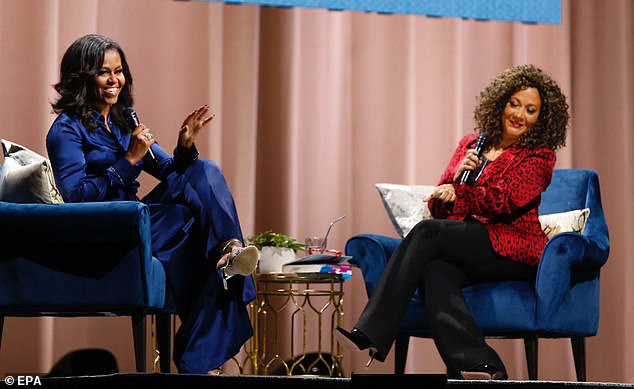 ‘There were people of all ages and all backgrounds, and, you know, the crowd…’

Obama did not complete the thought and went silent for a few seconds as the crowd in the arena understood where she was going with this.

The audience then began to laugh and applaud.

Crown Publishing told The Associated Press on Wednesday that the former First Lady’s memoir has sold more than 1.4 million copies in print and digital formats in the U.S. and Canada in the seven days since it was released November 13.

Michelle and former President Barack Obama each have been working on memoirs this year, for which they negotiated a $65million dollar deal with Crown Publishing Group/Penguin Random House. His book is expected in 2019.

When Trump took office in January of last year, much was made of the smaller crowd size at his inauguration compared to that of his predecessor.

But Trump made the situation worse by forcing his then-Press Secretary, Sean Spicer, to insist that the crowd size at his inauguration was larger – even though all of the visual evidence indicated that this was not true. 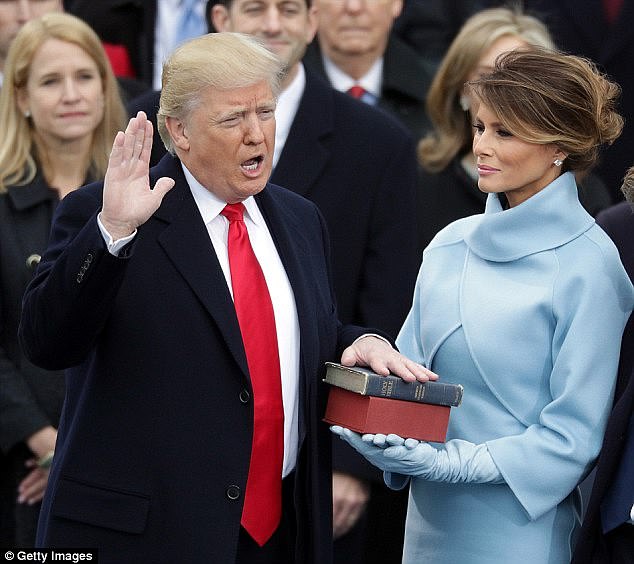 Trump took the oath of office as his wife, Melania, held the Bible at the U.S. Capitol in Washington, D.C. on January 20, 2017 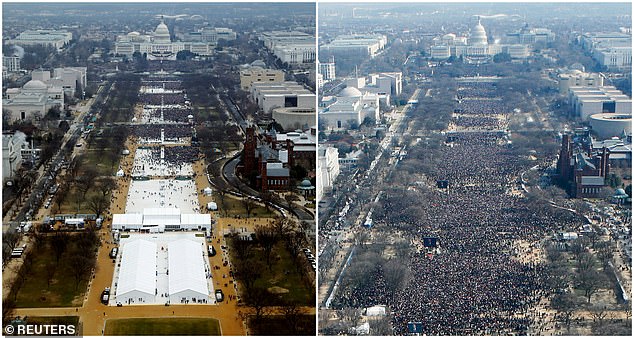 When Trump took office in January of last year, much was made of the smaller crowd size at his inauguration (left) compared to that of his predecessor’s in 2009 (right). Then-Press Secretary Sean Spicer insisted that the Trump crowd was larger – even though this was not true

In fact, it was later learned that Trump requested that his inauguration photos be edited to make the crowd appear larger after he came across the viral side-by-side image of his sparse audience in comparison to his predecessor.

, under the admission of the Freedom of Information Act, obtained documents that confirm Trump and Spicer made phone calls in which they requested a government photographer make the crowd appear more outstanding in his favor.

On January 21, 2017, the day after he was sworn into presidency, Trump spoke with the director of the National Park Service, Michael Reynolds, about the matter.

The Guardian said Spicer also spoke to an unnamed NPS official, who was informed the president ‘wanted to see pictures that appeared to depict more spectators in the crowd’ and argued that the raw images showed off ‘a lot of empty areas.’

Another park official, who spoke with Spicer, said he asked that the photographer edit the photos, but to ‘accurately represent the inauguration crowd size.’

The government photographer who reportedly edited the photos said he ‘assumed’ their requests were to have the photos cropped in, although that is not what he said was formally asked of him.

Later in the day, the photographer said he was asked again to ‘edit a few more’ of the images – despite altering as many as 25 already.

The special request by the president came shortly after he saw the viral side-by-side image of his sparse audience in comparison to Obama’s back in January 2009.

It has not been confirmed whether the edited photos were actually released to the public.

Hailey Baldwin flashes her diamond with Justin Bieber on London Eye
United Airlines plane slides off icy taxiway and into the grass at Denver Airport
Michael Douglas says he's 'extremely disappointed' at the sexual harassment accusations against him
Manhunt is on for 'bank robber who shot at police officer and then ran off'
Thrifty mother created beautiful DIY Snow Man for only £11.75 using balloons and strings
Republicans vent fury at UK's Boris Johnson for letting Huawei be part of its 5G network
Man's colon cancer spreads to his TESTICLES after he was kicked by a mule 20 years ago
Cate Blanchett suffers a head injury in a 'chainsaw accident'