Kate Silverton has little truck for the Curse of Strictly.

She prefers to think of her nine weeks on the show as weaving ‘marriage magic’.

The other day her husband, former Royal Marine Mike Heron, grabbed her by the waist and said: ‘Babe, you look incredible.’

And then? ‘I’m loath to talk about that,’ the sylph-like newsreader says with a grin.

Today the 48-year-old’s silk blouse is unbuttoned to the cleavage, while the skinny leg corduroy trousers that she hasn’t been able to get past her thighs for the best part of six years now sit loosely on her hips. 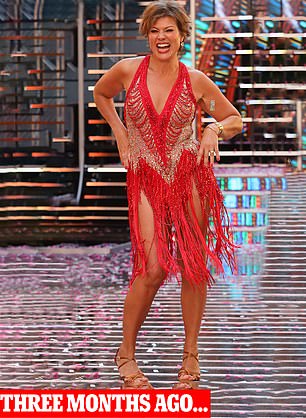 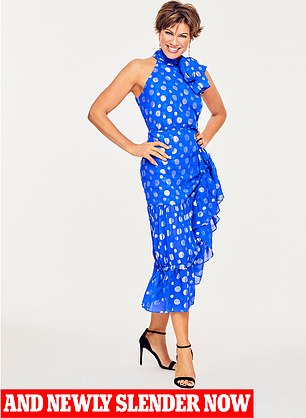 Kate Silverton has dropped two dress sizes since appearing on Strictly three months ago (left). She says the show’s strict routines have fast-tracked her to a slender physique (right)

When we met little more than two months ago she was … well, let’s just say a good sight heftier.

When she shook her stuff in her sensible pleated skirt to show to me her pre-Strictly dance moves you couldn’t help but think she’d be lucky to make it through her first cha-cha-cha let alone to the iconic Blackpool Tower Ballroom.

Last Saturday Kate did just that with her dance partner Aljaz Skorjanec, inspiring many who have watched her transform over the weeks.

‘I have gone down two dress sizes,’ she said. ‘It has been so rewarding – I feel fitter and healthier. I can fit into my wedding dress, which is just heaven.

‘About two weeks ago I took it out of the attic thinking, ‘I just wonder…’ That was probably when I felt at my best. I shouted, ‘Come on everyone, look at Mummy!’ The kids [Clemency, seven, and four-year-old Wilbur] were, ‘What are you doing?’ Mike was like, ‘Wow’. 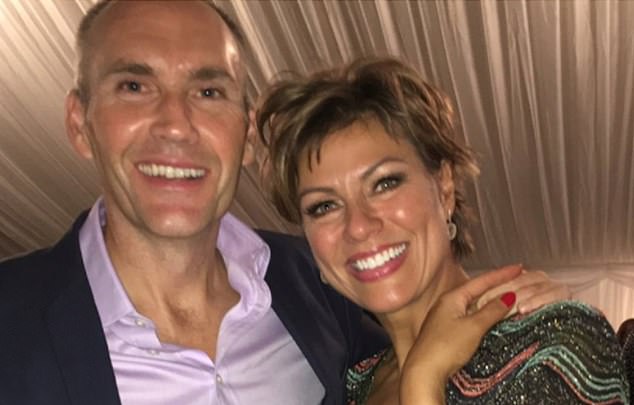 The other day Kate’s husband, former Royal Marine Mike Heron, above, grabbed her by the waist and said: ‘Babe, you look incredible.’ And then? ‘I’m loath to talk about that,’ the sylph-like newsreader says with a grin

Always an athletic woman, she swam regularly until children, a career and running a home left her little time.

‘Any mum will relate to that,’ she said. ‘You think, ‘I just won’t get into a bikini again and I won’t get to a place where I can walk around in front of my husband’.’ Does she now? Again, she grins.

‘It’s nice to have this week when the children are at school and Mike’s not travelling so we can go out on a lunch date,’ said Kate, who lost in last week’s dance-off to cricketer Graeme Swann. ‘There is an element of getting ourselves back as a couple and we’re celebrating that.’

During her time on Strictly she missed her children desperately. ‘Although I tried to do the school run, I was away all Friday and Saturday,’ she said. ‘I knew they were old enough to cope with the separation but even so… My time as a mum is so much more precious to me than anything else.’

She added: ‘Strictly was lovely … I had a really good stint. I thought we were going to go [last week]. The judges had put us in the bottom two each week so I felt we’d been dodging the bullet.

‘My mantra has always been to leave the party when you’re having fun so I felt it was a good time to go. My only sadness is my Argentine tango.’ 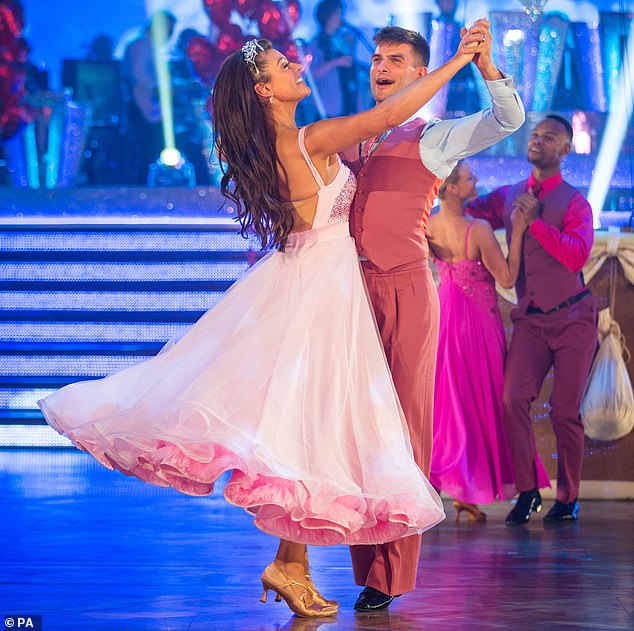 Three weeks ago, the day before the live show, a muscle in her rib cage ‘popped’ during rehearsals. She needed gas and air to ease the pain.

She soldiered on but the marking for her tango was low. Now, she says philosophically: ‘It’s a television programme. I’ve lived enough of a life to face lots of challenges, as many people have.’

Kate had five years of failed IVF attempts after meeting Mike 12 years ago, and had all but resigned herself to never having children when Clemency was conceived naturally two years after they married.

She lost her father Terry to cancer ‘a few years back’ and her best friend Jamie to pancreatic cancer when she was 26.

‘It was Jamie who made me go into journalism. I was working in corporate finance but was rubbish at figures. I remember him lying there, hooked up to his medication saying, ‘I don’t have long – you need to live your life loving every minute of it’.’

The day after he died she picked up the phone to the BBC.

Now, she said: ‘I don’t make decisions any more based on fear. When I accepted Strictly I did it for joy. 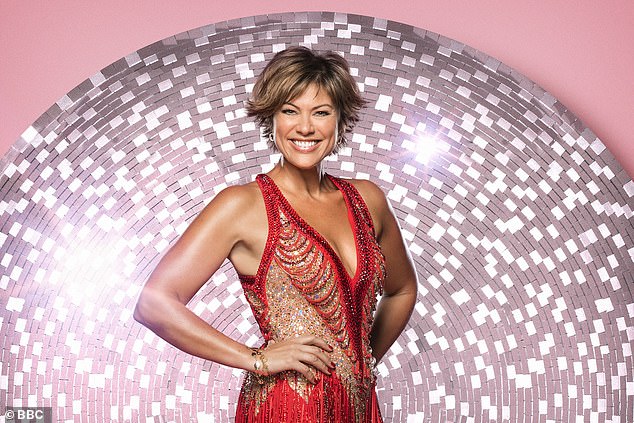 She prefers to think of her nine weeks on the BBC show as weaving ‘marriage magic’. During her time on Strictly she said she missed her children desperately

‘On the first show in that red dress, which was like a hankie, I thought, ‘This is how I look. I am a woman of 48 who has had children late in life’. It wasn’t in a self-pitying way but in a ‘Thank God for my body’ way. I’m really proud of what my body’s been able to do.’

The psychology graduate is now researching a series on children’s mental health and is to train with a charity as a children’s counsellor in the new year.

‘My work in childhood trauma next year is my ultimate focus,’ she said.

‘The person people saw on Strictly wearing a pink dress and being giddy was not there because she hasn’t had it tough. I just want to demonstrate that whatever people face, we can heal and then we can help others to do the same.’