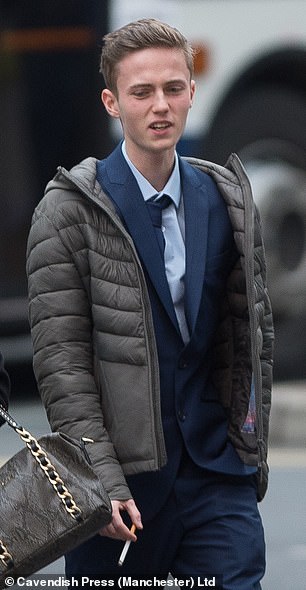 A teenager has been ordered to sign the Sex Offender Register after he was caught canoodling with a 14-year old schoolgirl as they watched a movie together at the cinema.

Callum Chant, then 19, and the youngster were sat together side-by-side in one of the rows and during the film were seen to close in on each other as if they were about to kiss.

Chant, of Bury, Greater Manchester, also touched the girl’s leg and bottom over her clothing before he was spotted by her stepfather and the girl’s mother who turned up unexpectedly to check on them.

The mother later obtained CCTV from the cinema in Bury, which showed Chant and her daughter ‘sat next to each other and their heads moving close to each other’ a court heard.

Chant later claimed he and the girl had agreed to go with friends to watch the film but it is thought the group separated leaving them alone together.

He was arrested and issued with a Child Abduction Warning notice urging him to stay away from younger girls.

But he was detained again just three months later after another girl aged 15 was found at his flat.

At Minshull Street Crown Court, Manchester Chant, who was 18 at the time of the offences admitted sexual activity with a girl aged under 15 and child abduction and was ordered to sign the Sex Offender Register for five years.

He was also made subject a two year community order and abide by a fourth month curfew from 7pm-7am. Both girls refused to make a statement to police.

The cinema trip occurred on February 24 this year after Chant asked the girl to go on a date with him. 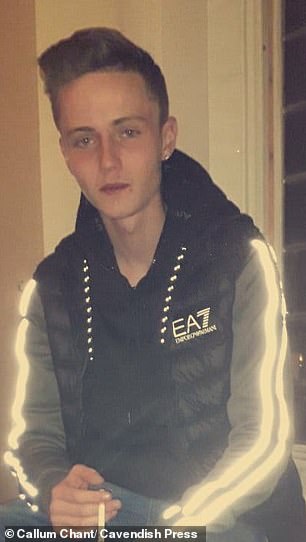 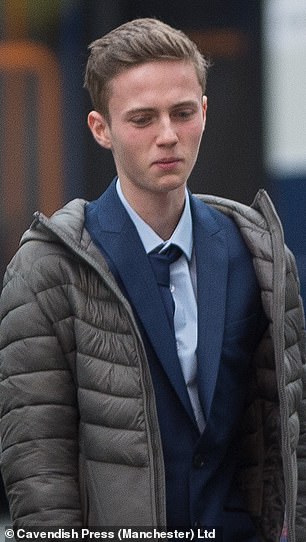 Chant (pictured) and the girl were sat together side-by-side in one of the rows and during the film were seen to close in on each other as if they were about to kiss, the court heard

Prosecutor Katherine Johnson said: ‘That day the 14 year old’s mother received a telephone call saying she was going to the cinema with the defendant. Her mother didn’t know him but was told he was 18.

She was shocked to see him, and the partner asked Chant if he knew she was 14.

‘The defendant replied saying ‘yes’ and that they were just friends. The two said they had been with other friends who left the cinema earlier. The partner then told the girl to leave with him which she did.’

Ms Johnson said her mother than made enquiries with the cinema to see CCTV of the pair.

She added: ‘They denied that they kissed at all, but there was some touching of her bottom shown on CCTV over clothes and on her leg.

‘He was placed under a child abduction warning notice on 13th March but he said they were friends and wanted to meet up. He did accept he had touched her bottom on the day he was interviewed.

‘On May 9 the other girl had been staying with her grandma but she didn’t return home and her grandma learned she had gone to the defendant’s flat. The girl refused to let her grandma in when she turned up, and did this for an hour.

‘She managed to get in and the girl was in the flat with Chant and another male. Her grandma got in and the young persons tried to prevent her to get in the living room.

‘On 13th May the girl had not returned home again and was in fact reported missing at 10pm. Her grandma sent a taxi to her and asked her to come back home with the defendant and said she wished to meet him, to trick her to come home.

‘They turned up and her grandma spoke to him and he denied being in a relationship with her, but the police attended and he was arrested in the early hours of 14th.

‘He was interviewed in relation to both offences he was in the company of the girl. On 9th he had gone to the flat so his friend could charge his phone. On 13th he met up with her and they went for a Chinese with their friend.

‘He believed the warning notice had been lifted. Being out on that time put him in breach of bail as it was past his curfew time anyway. He was not supposed to have any unsupervised contact with anyone under 16. Both girls refused to make a statement.’

Defending lawyer Daniel Colder said his client ‘recognises these are serious offences’ but said he had been rejected by friends his own age because of his physical appearance.

Sentencing Judge Mark Savill told Chant: ‘There is nothing technical about these offences. She was a child and it was sexual activity and you have to understand the seriousness of it.

‘It has been evaluated that you do not pose as high risk of immediate harm, you are genuinely remorseful and are not someone with an interest in underage girls.

But if you are foolish enough to breach this court order you will be back before me. You should consider yourself extremely lucky.’