A small group of 150 migrants are now settled 500ft from the US border in after trekking for more than a month through Central America.

The smaller group broke off from the larger, 6,000-strong caravan of migrants who are sleeping in the Unidad Deportiva Benito Juárez sports field in Tijuana on Thursday.

They hoped that since it was Thanksgiving, border officials would soften their resolve and let them pass over into America.

They carried white flags which said ‘Peace and God are with us’ in Spanish as they approached the San Ysidro crossing which is the busiest along the border.

They were met by Mexican riot police who told them calmly to apply for Mexican workers visas. The group then retreated and settled in a plaza for the night. 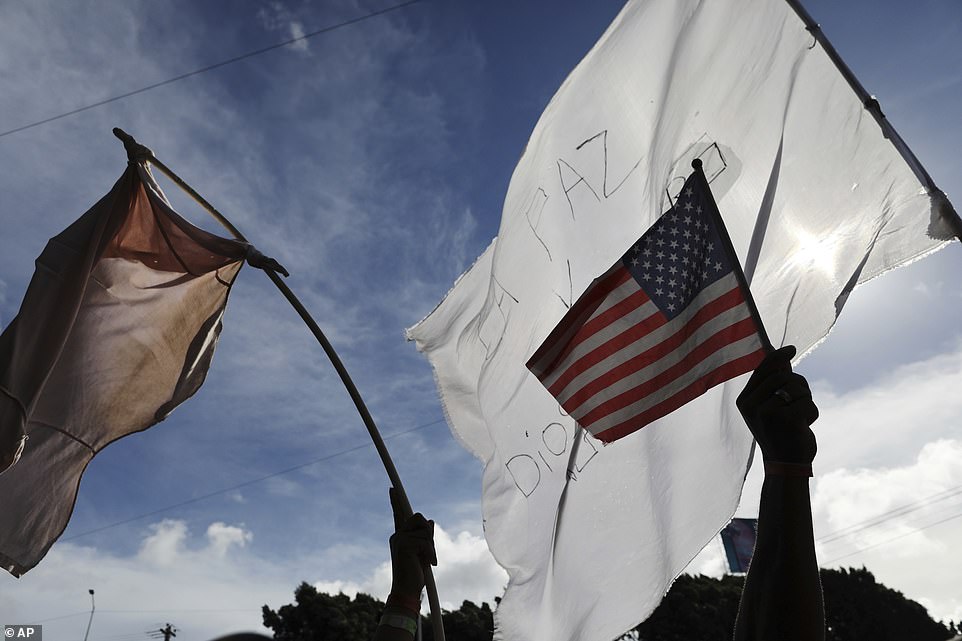 The group of 150 migrants broke off from the larger, 6,000-strong group in Tijuana and marched towards the border carrying flags which read ‘La Paz y Dios’ in an effort to cross over into the US on Thanksgiving 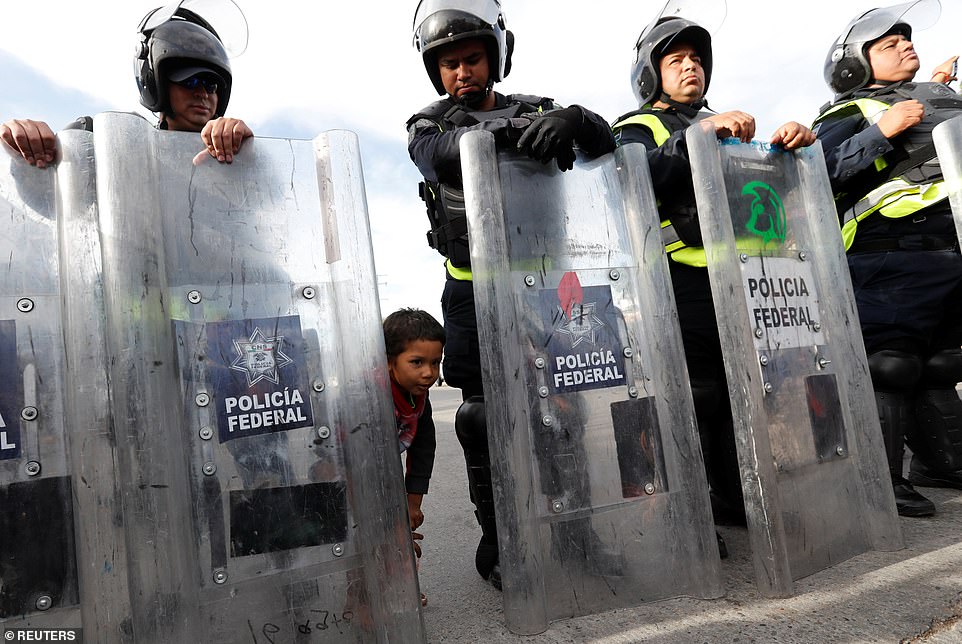 The group was met by Mexican police who were calm and told them to organize themselves and apply for worker’s visas in Mexico instead of trying to enter the US. The border police allowed children who were part of the caravan to play at their feet and stand with them on the other side of their barricade 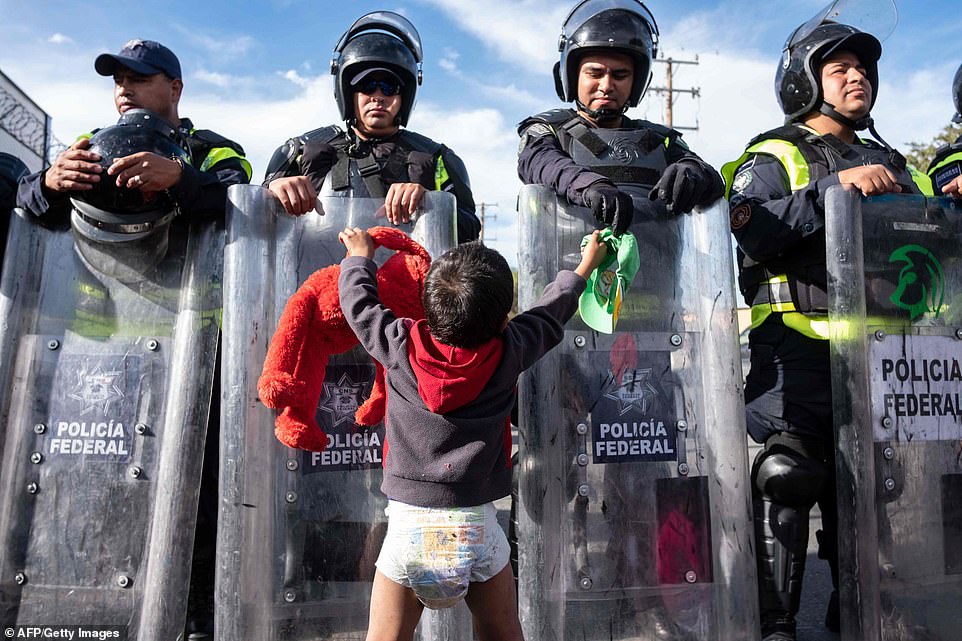 The Mexican police were amused by the Honduran children playing at their feet. They were relaxed as they refused the group entry 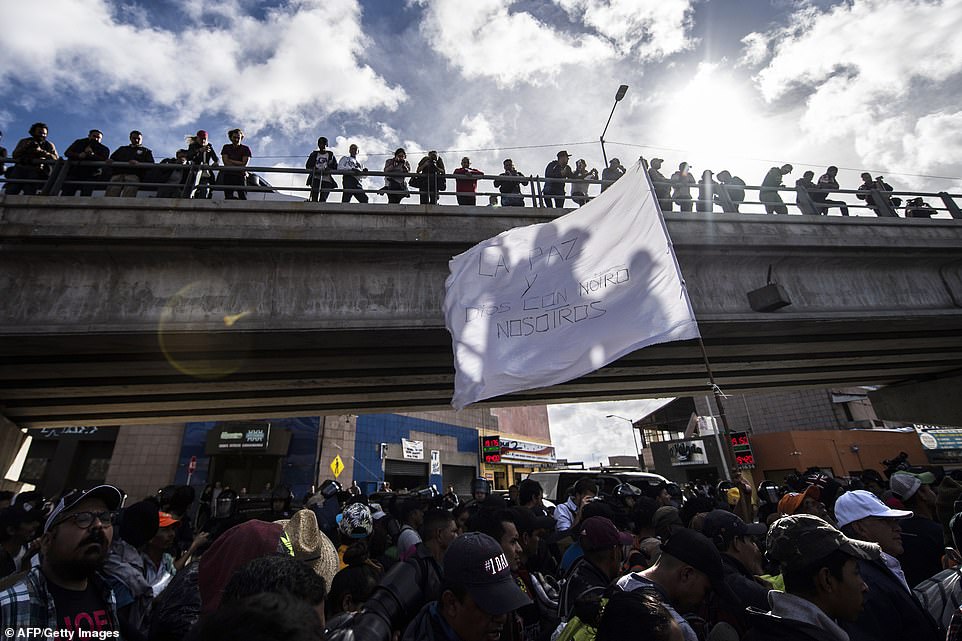 The group walked from Tijuana’s center over a bridge which leads to a US border crossing. They hoped that because it was Thanksgiving, they might be allowed to pass into America 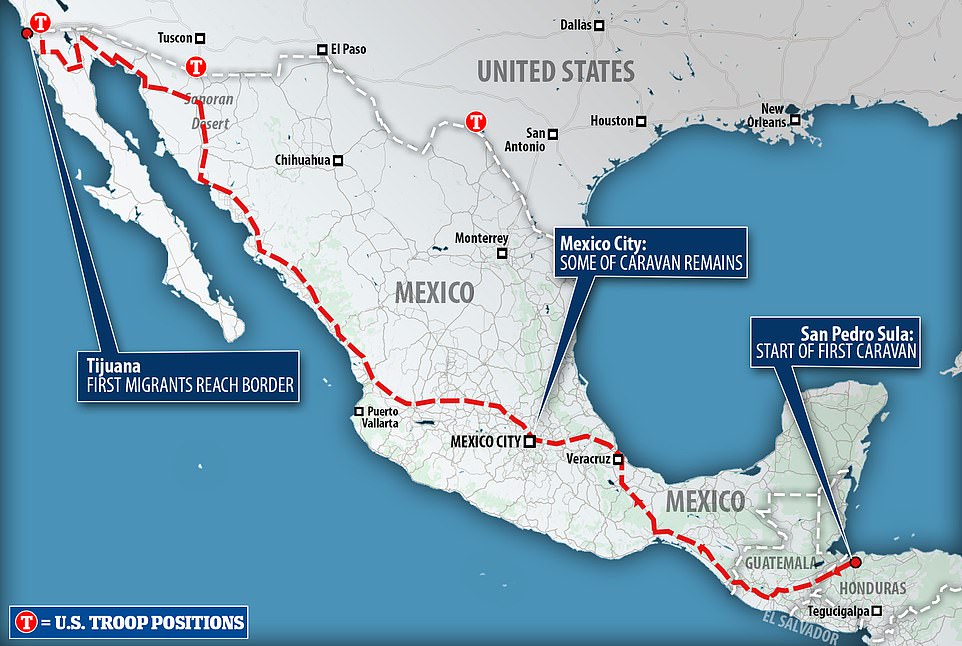 It is unclear if they will attempt to storm the crossing or not.

The Mexican police told them to organize themselves on Thursday after they made their first attempt.

It was a calm encounter and some of the migrant children got over the border line and played at the feet of the Mexican officials.

In addition to the 6,000 in Tijuana, there are an additional 2,000 migrants who are snaking through Mexico, following the first group’s path.

‘I’ve been walking for a month and a week, I want to see the United States,’ Carols Lopez, one of the 150 people who approached the border, said after making it to the plaza on Thursday.

Oscar Rodriguez, 22, of Colon, Honduras, said he was still set on convincing ‘the United States to open its doors to us.’ 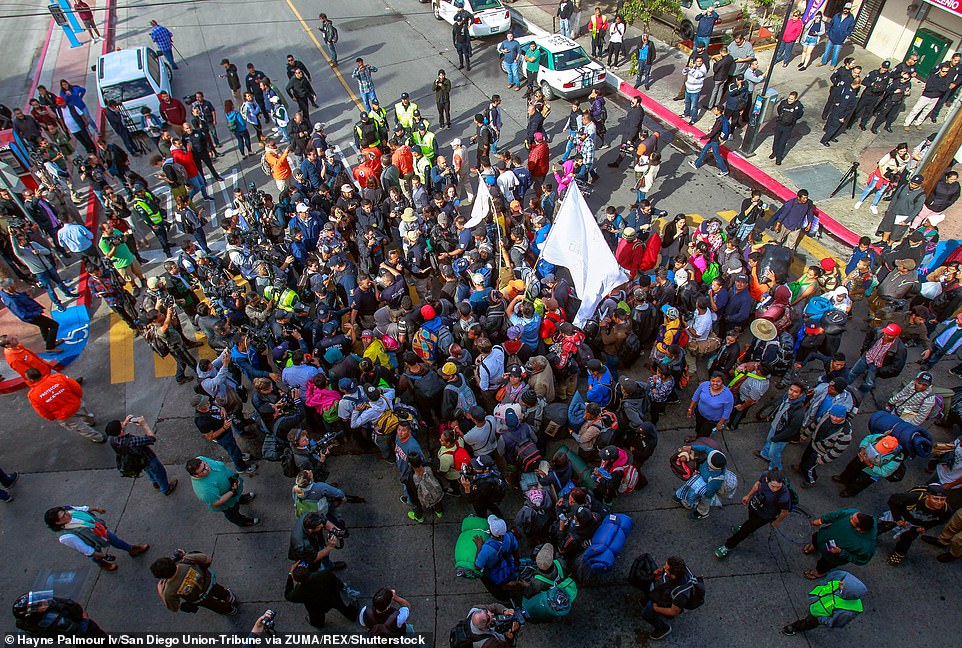 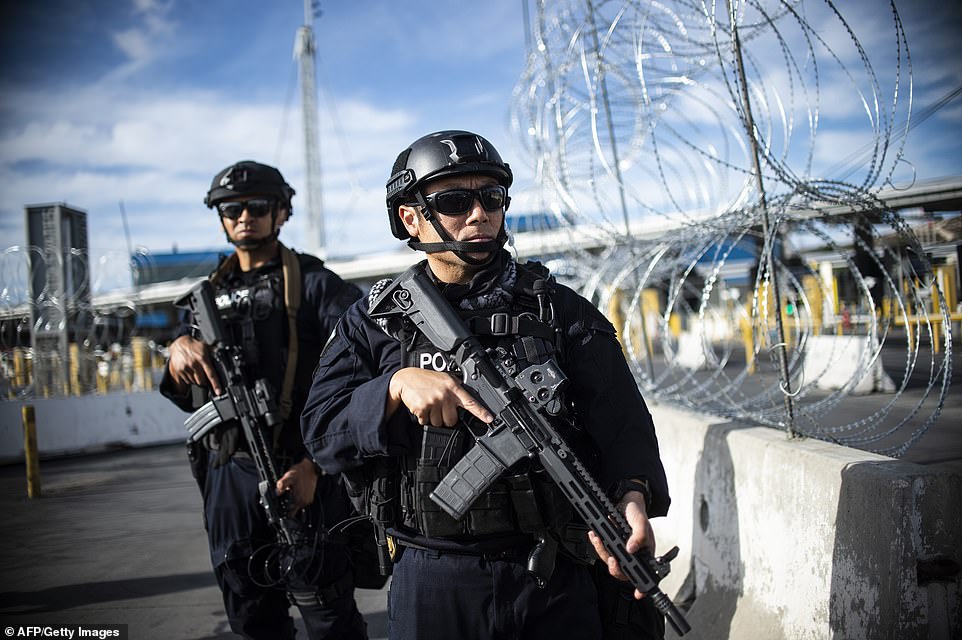 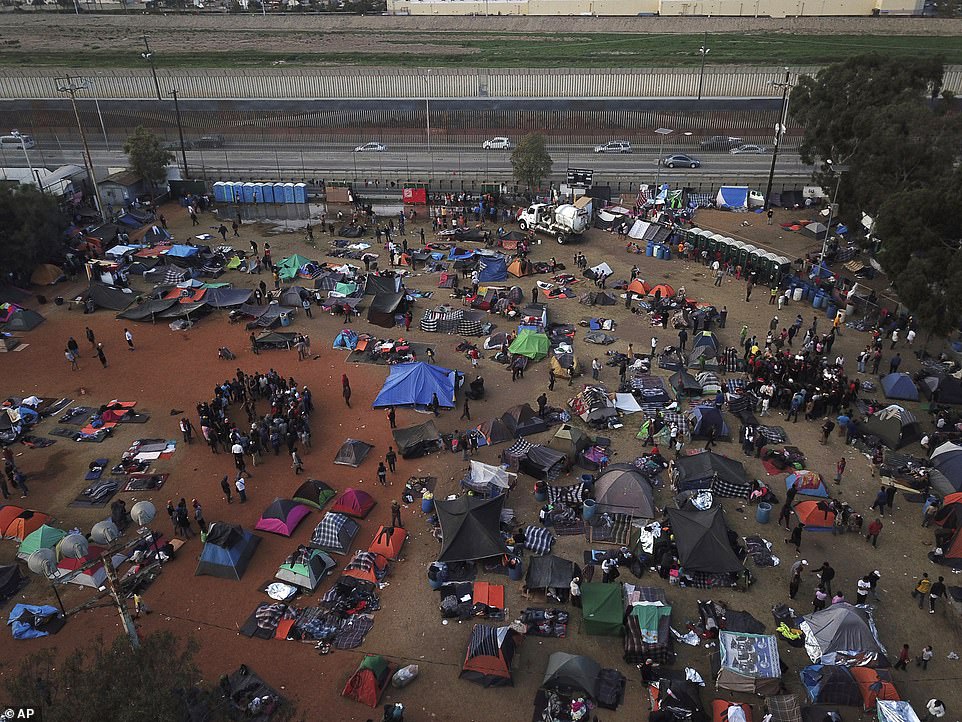 Thousands of migrants are sleeping in Tijuana in a disused sports field. They have been there for several days. They want to apply for asylum in the US and have marched for more than a month through Central America to get there 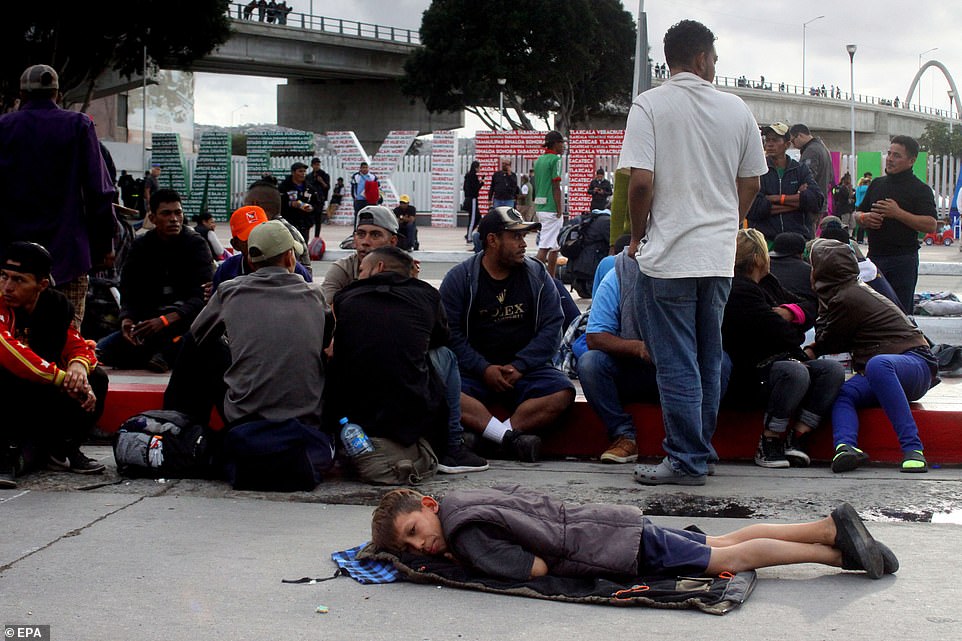 Rodriguez said U.S. meddling in Honduran politics had created conditions that made it impossible to him to live there.

‘Thousands more people are going to continue coming because the United States is a government that sticks its hands into Central American governments,’ Rodriguez said.

He said Honduran President Juan Orlando Hernandez, who was re-elected in a disputed result last year, is the United States-chosen president.

President Trump has threatened to close the border to stop the group and has given soldiers the go ahead to use lethal force ‘if they have to’.

Homeland Security has claimed that there are 500 criminals in the caravan and most were men.

They would not reveal how they identified them among the thousands of people who are making their way there.