His history of feuding with former colleagues suggests Noel Edmonds could start a row in an empty room. Then there are his wacky beliefs. So how will the TV host fare as he is set to be unveiled as the latest star in the I’m A Celebrity jungle? ALISON BOSHOFF looks at the life of a showbusiness veteran who has promised to leave TV for good if he’s voted King of the Jungle – which should guarantee he wins!

In 2015 Noel claimed ‘electrosmog’ – clouds of electromagnetic fields caused by wifi, phone signals and electricity – was destroying our ‘own electromagnetic fields’, making us ‘electrosensitive’. He said: ‘All you are is energy, remember that… ‘There isn’t such a thing as death, it’s just departure. You cannot die. It’s been known for a very, very long time.’

Noel is such a believer in using a £2,300 electro-magnetic pad to stimulate ‘cellular resonance’ in his body that he, wife Liz and their pet dog and cat each spend eight minutes a day sitting on it.

In 2013, he was diagnosed with prostate cancer – caused, he says, by stress – and opted for sound therapy, which he says has worked for him.

He also undertook a visualisation exercise, putting an image of cancer on his phone as a screensaver and saying ‘Bye bye’ to it every time the phone rang.

Liz will not listen to the news on the radio – as hearing it might make her ill. She said: ‘Your cells react when you see or hear about violence. The brain starts to pick up the vibration which causes your DNA to basically go tight. It should be more relaxed.’

Noel’s fitness regime means he drinks water ‘restructured back to its natural source state’ and health shakes, meditates and avoids red meat. He also exercises ‘very slowly’ for an hour a week in the dark while listening to electronic pulses. 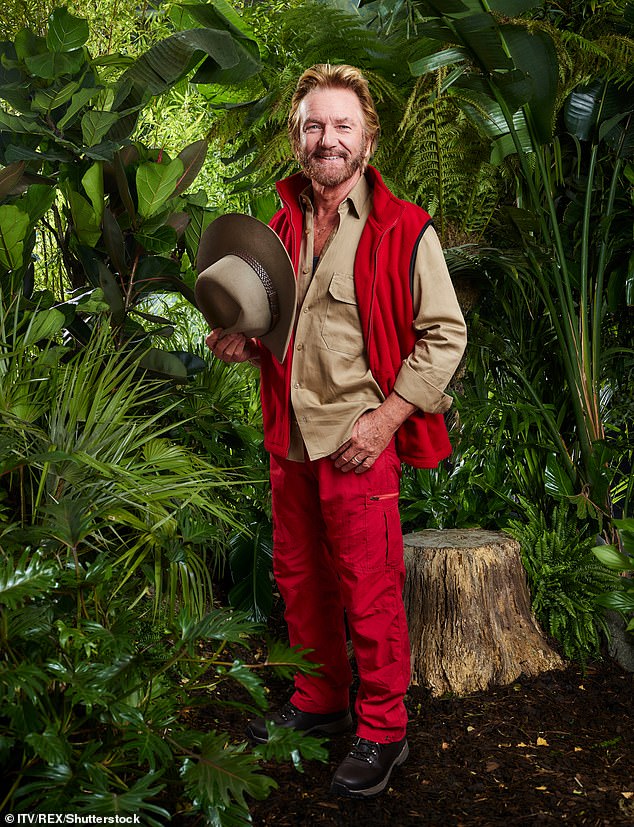 How will the TV host fare as he is set to be unveiled as the latest star in the I’m A Celebrity jungle?

Noel says he is visited by two orbs, which he believes are his late parents. He said: ‘They’re both the size of a melon and one sits on my arm and the other is over my shoulder. I like to think they’re my parents. Conventional photography can’t pick them up but digital cameras can. My belief is that these are something to do with some form of spiritual energy. And possibly because I miss my parents like mad, I like to think they are them.’ Liz says that she sees auras around people and things.

The Twitter era – with its instant outrages –was probably made for Noel Edmonds. In 2016 he tweeted to ask a cancer sufferer if his ‘negative attitude’ was responsible for him developing the disease – causing an immediate storm of condemnation.

‘Diseases are caused by negative energy,’ he asserted. ‘Is it possible that your ill-health is caused by a negative attitude?’

Noel then went on This Morning, where an unusually stern Phillip Schofield took him to task. Directly afterwards Noel wrote: ‘Phil if you are unlucky enough to be seriously ill I, promise I won’t be so callous and will show you respect, sympathy and compassion.’

Have you ever bemoaned the decline in TV standards? Well, Noel kindly shouldered the blame for the ruination of television in a 2003 interview. He said that when his Saturday night show Noel’s House Party – which featured the infamous Mr Blobby and was set in the fictional village of Crinkley Bottom – went into a downward spiral before being axed in 1999 amid falling ratings, it dragged the rest of TV down with it. ‘I’ll admit I am a contributor to the decline in TV standards,’ he said. ‘I don’t say that with pride.’

HIS OTHER PLASTIC FRIEND

After Mr Blobby, from around 2011 Noel started to take a fully clothed shop dummy with him, sitting her in the passenger seat of the taxi he drove so that people didn’t try to hail him. ‘Candice’ even ‘performed’ on a dance track which in 2013 got to No 3 in the dance charts. She’s not believed to be coming to the jungle with him – though she might be more entertaining than some of the inmates. 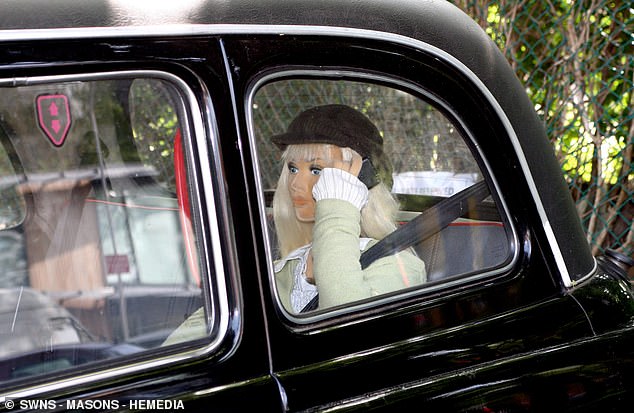 From around 2011 Noel started to take a fully clothed shop dummy with him, sitting her in the passenger seat of the taxi he drove so that people didn’t try to hail him

DJ Mike Read – a Celebrity jungle veteran – was, like Edmonds, once a presenter of the Radio 1 breakfast show. But that doesn’t make them friends. In a 2006 interview, Noel called Read ‘a w***er’, and added: ‘If it was an Olympic sport, he would have won more medals than Steve Redgrave.’

Read responded: ‘I always thought that Noel and I got on well together and honestly could not be more delighted that his (Deal Or No Deal) comeback has been so successful.’

In the same interview, Noel said of former Radio 1 colleague Tony Blackburn: ‘Poor old Tony’s got a big memory problem. I always wondered whether he realised that Capital Gold is an Oldies station.’ The two are now friends, with Edmonds saying that on the old Radio 1 there was always fierce rivalry between DJs.

Of another colleague and breakfast show host, Dave Lee Travis, he said: ‘Dear Dave. If it wasn’t for pirate radio he’d have ended up digging roads in Manchester. He was never the brightest spark.’

As for DJ Sara Cox, new host of Radio 2’s drivetime show, he’s called her ‘very yesterday’ as a talent. ‘She’s coarse and unpleasant,’ he said. 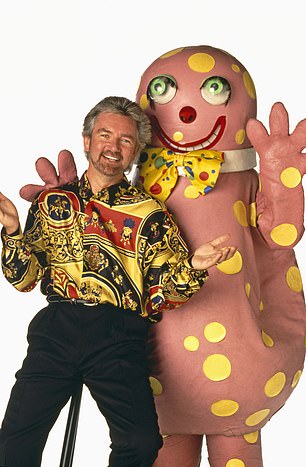 ‘I’ll admit I am a contributor to the decline in TV standards,’ he said. ‘I don’t say that with pride’

For years, Noel lived on the huge Broomford estate in Devon with his then wife Helen, their three daughters and a plethora of pets and livestock.

‘We live knee-deep in animals of every kind,’ he said. He claimed to be a dab hand at delivering first aid to newborn creatures. ‘I’ve given a foal mouth-to-mouth. It’s hard, you can only do one nostril at once. It lived,’ he said.

‘I’ve also saved lambs by swinging them around my head and then putting them in the oven.’

Noel became a believer in cosmic ordering after being given a book about it by his reflexologist. He said that four of six wishes he wrote down and offered to the cosmos then came true, including his wish to front another hit show – which was Deal Or No Deal.

‘You’ll think I’ve gone away with the fairies, but its fantastic!’ he said. He wrote a book, Positively Happy: Cosmic Ways To Change Your Life, in 2006. He explained: ‘To me cosmic order is all about being a positive person who takes charge of your own life.

‘You have to make conscious decisions to go out and make things happen for you.

‘It’s not hocus-pocus New Age stuff. You don’t have to wear beads and smoke exotic substances to be able to get into it.’

There was a purple patch in 2006, after his marriage to Helen broke up, when Noel was hailed as the most unlikely mid-life lothario in showbusiness. Over the space of a few months he squired an ex-Miss England, a French estate agent and Deal Or No Deal contestant Kelly Napper, 27.

All of that came to an end when he met makeup artist Liz Davies. Recently separated from her cameraman husband, she moved in with him at his £3million mansion in the south of France and they later married.

The house is in the hills behind Nice, dates from the 16th century, and has spectacular gardens, olive groves, and a swimming pool. In the UK he has a home in Devon with a lake.

Former girlfriend Marjan Simmons says Noel used to take 45 minutes to blow-dry his hair and style his beard – while she would be ready to go out in ten.

‘I found it a little odd, but that’s his character,’ she said. ‘The bed had to be made a certain way.

‘He’d spend half an hour making it some days, and even then it wasn’t always to his liking. He was always so specific about how he wanted things.’

She says he has a phobia of water. ‘We once went snorkelling in the Maldives on a romantic break. We’d been in the water five minutes and he started to freak and want to get out.’

Deal Or No Deal was a huge success. It started in 2005 and commanded audiences of up to three million, but was axed in 2016 after ratings had fallen to around 300,000 – by which time Noel had handed out £40million in prize money. ‘I’ve had a sensational ten years,’ he said.

He says he has not chased subsequent jobs on TV, although there have been some other pilots for Channel 4. 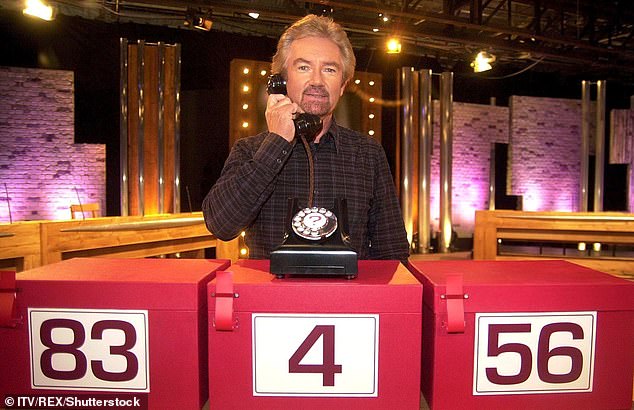 Deal Or No Deal was a huge success. It started in 2005 and commanded audiences of up to three million, but was axed in 2016

Last year Noel spoke about how, in January 2005, he tried to kill himself by taking handfuls of prescription pills washed down by a bottle of vodka.

He was discovered in woodland on his estate in Devon, and his life was saved.

He said he blames the bank HBOS for the woes which led him to this low, including the end of his 19-year marriage to second wife Helen, which he called ‘a tragedy that is impossible to exaggerate’.

He said: ‘HBOS had robbed me of my marriage, my family, my businesses, my long-standing friend and business partner, my income, my investments, my self-respect, my reputation, my privacy, my physical and mental health. It cost me my security, my image rights, my collection of classic cars – and very nearly my life.’

As you might expect, it’s a complex story but Noel believes that his business empire the Unique group, which had been nurtured by him for 30 years, was driven into the ground by ever-increasing fees and charges demanded by the bank.

He sold part of his image rights, his classic cars and his TV memorabilia before having to put Broomford up for sale, too, in late 2004. He has now taken legal action against the bank – and is still said to be worth around £3 million.

Finally, it may be no bad thing that Noel has lost his classic cars. In an interview with Loaded magazine in 2008, Edmonds said that he drove 186mph in his Ford GT40 sports car at 4.30am – while naked.

He said: ‘I thought I’d take it out for a breather, the poor thing was stuck in its stable and needed exercise. I remember arriving at a roundabout horrendously fast, I almost didn’t stop.

His PR explained: ‘He woke up one morning stark naked and wanted to drive.’ Edmonds is a trained racing driver – but police and road safety groups were not impressed.