City mayor Virginia Raggi, who watched the operation carried out against the Casamonica mobsters, said the properties would be demolished before the New Year.

The gang are known for their gaudy extravagance, decorating their houses in gold and marble, and wearing Rolex watches as their trademark.

‘Today is an historic day for the city of Rome and for Romans,’ said Raggi, a member of the anti-establishment 5-Star Movement who has been criticised for not doing more to clean up the Italian capital. 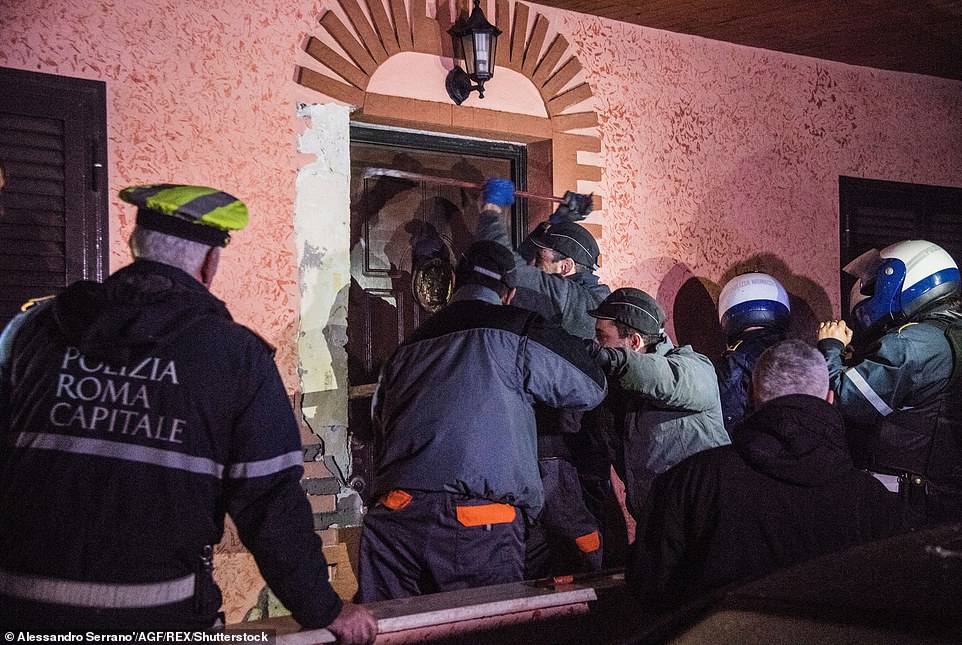 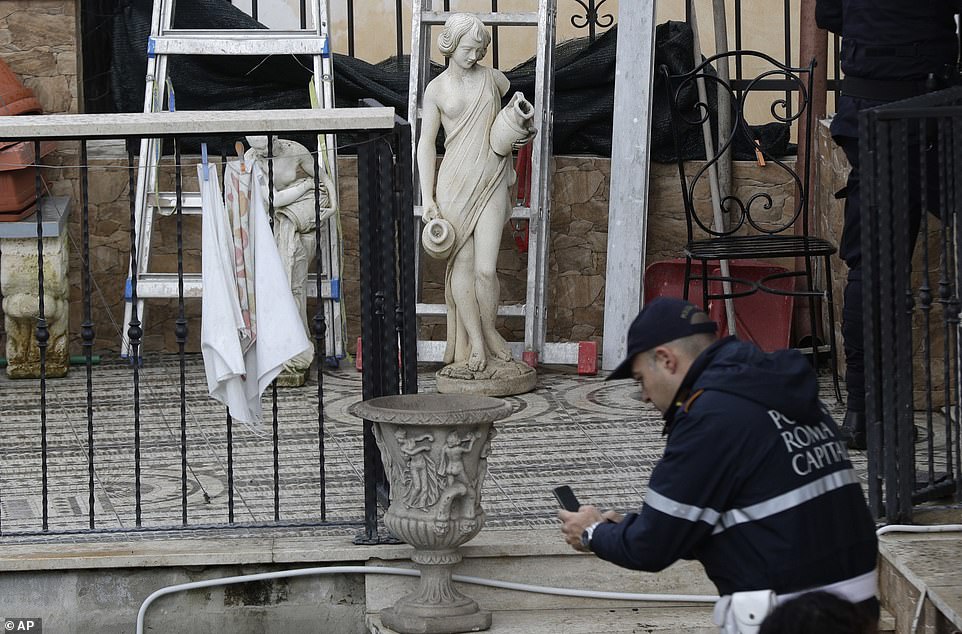 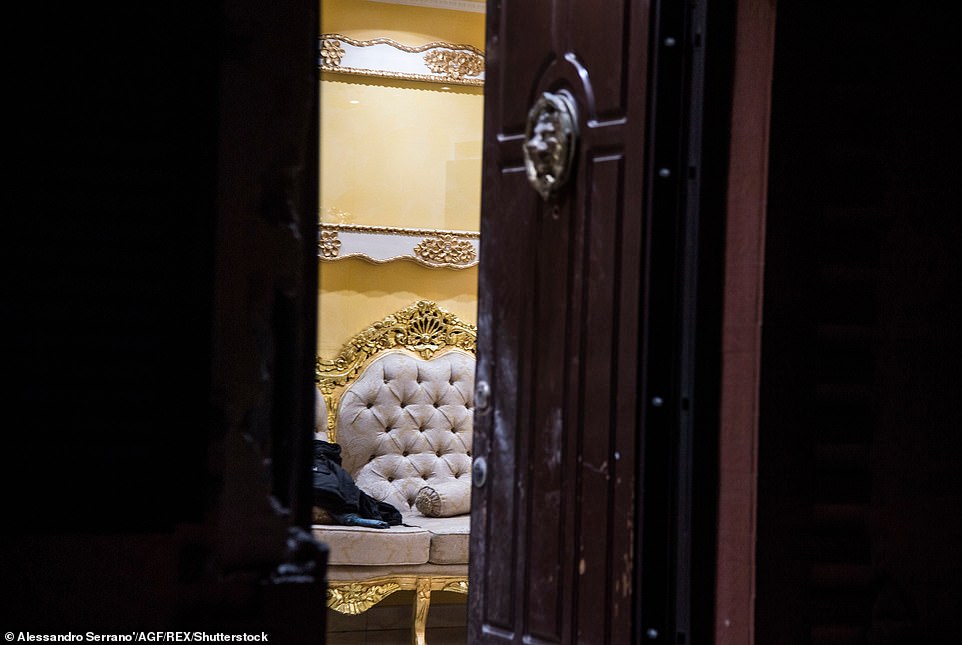 Gilded decorations can be seen on the wall, as well as on a plush soda within the large wooden doors with a brass lion head knocker 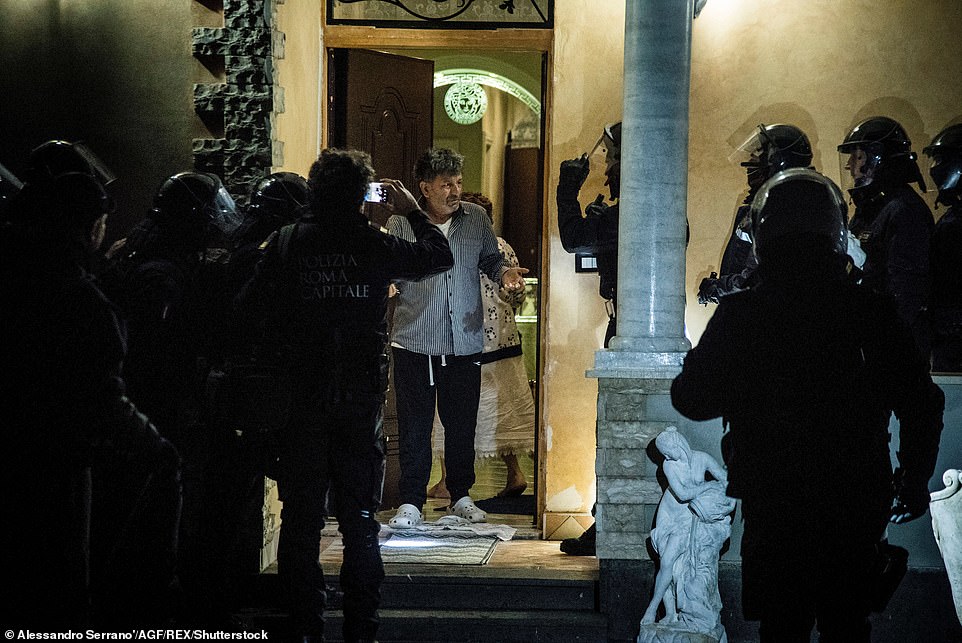 A bedraggled resident opens the front door to crowd of cameras and cops, as he gets a rude awakening at the crack of dawn 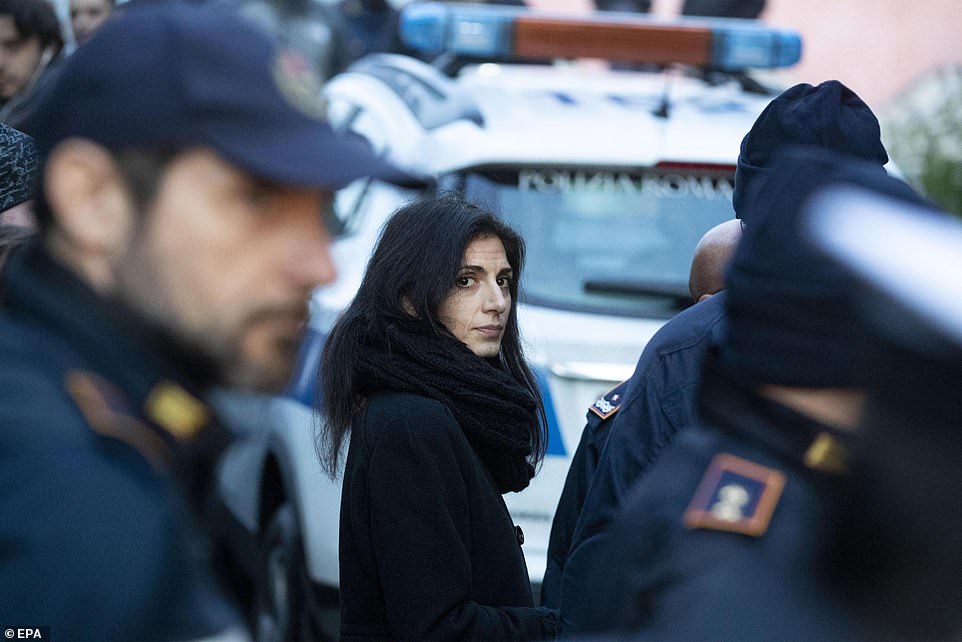 Mayor of Rome, Virginia Raggi, joined the police and said: ‘Today is an historic day for the city of Rome and for Romans’

‘We are putting an end to years of illegality and are sending a strong statement to the Casamonica clan,’ he said.

After years of operating in the shadows, the family came to public attention with a lavish funeral for one of its don’s, which included an orchestra playing The Godfather theme music in 2015.

A helicopter dropped rose petals on mourners while posters were strung on the railings of a city basilica which read: ‘You have conquered Rome, now conquer paradise.’

The Casamonica family has been associated with crime in the south-eastern quarters of Rome for several decades, but the high profile funeral sparked a fierce backlash with politicians demanding a comprehensive legal assault on the clan. 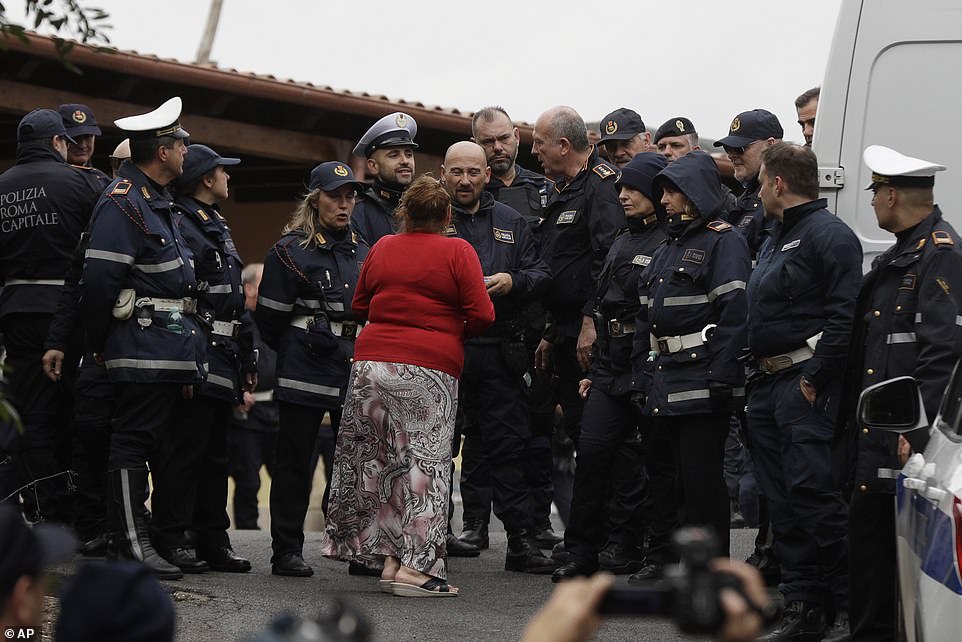 A resident is surrounded by police officers outside one of the Casamonica villas this morning, where men, women and children were turfed out 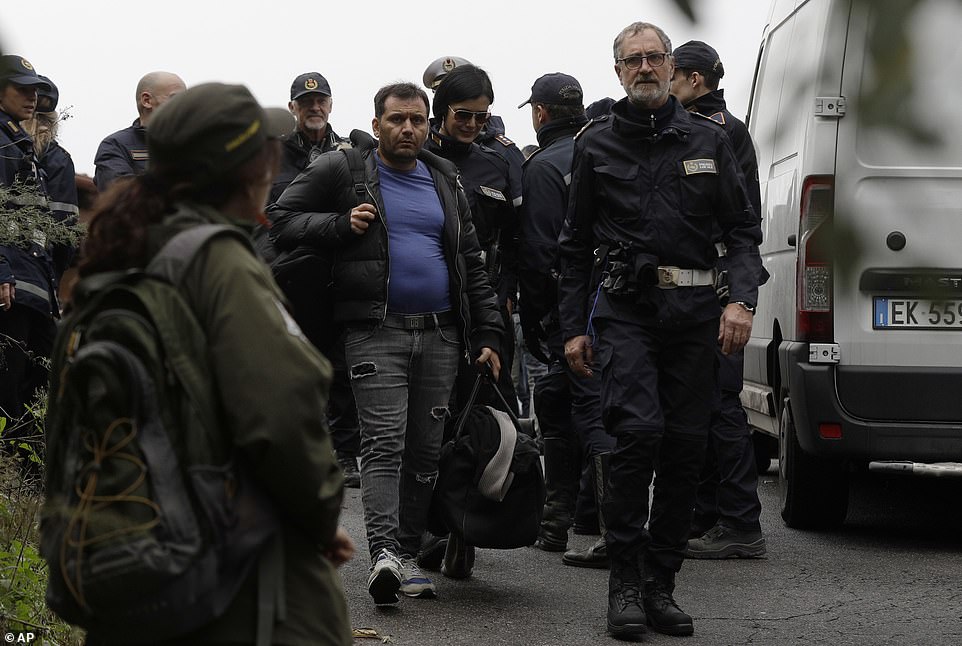 A resident is taken away from one of the colossal villas, as he carries a bag full of his belongings, surrounded by officers 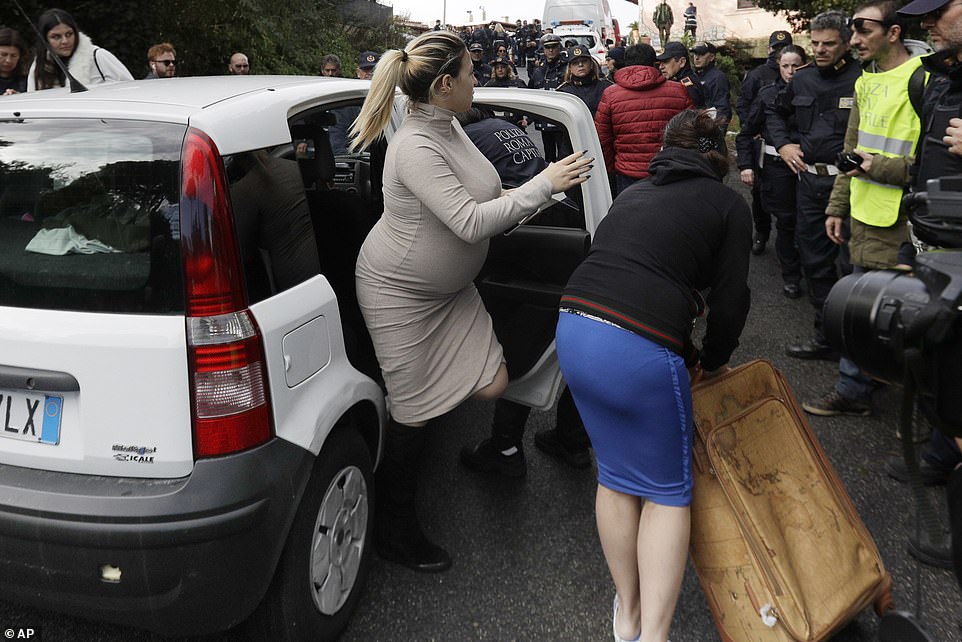 In July, 33 members of the group were arrested in raids on extravagant homes filled with gilded mirrors, marbled sculptures of animals and extravagant, regal furniture.

A total of 11 women and 22 men were arrested including an alleged chief of the outfit.

Their lavish homes were filled with expensive goods – including a life-size marble leopard – in gaudy properties with gilded and marble furniture.

Instagram pictures emerged of one of those arrested in July, Ottavio Spada, who posed with bottles of Champagne and diamond encrusted jewellery.

Debora Cerreoni, the wife of one of the alleged senior mobsters, Massimiliano Casamonica, turned supergrass to give vital information to police.

She told them that the Rolex is the gang’s favourite type of watch, their symbol. 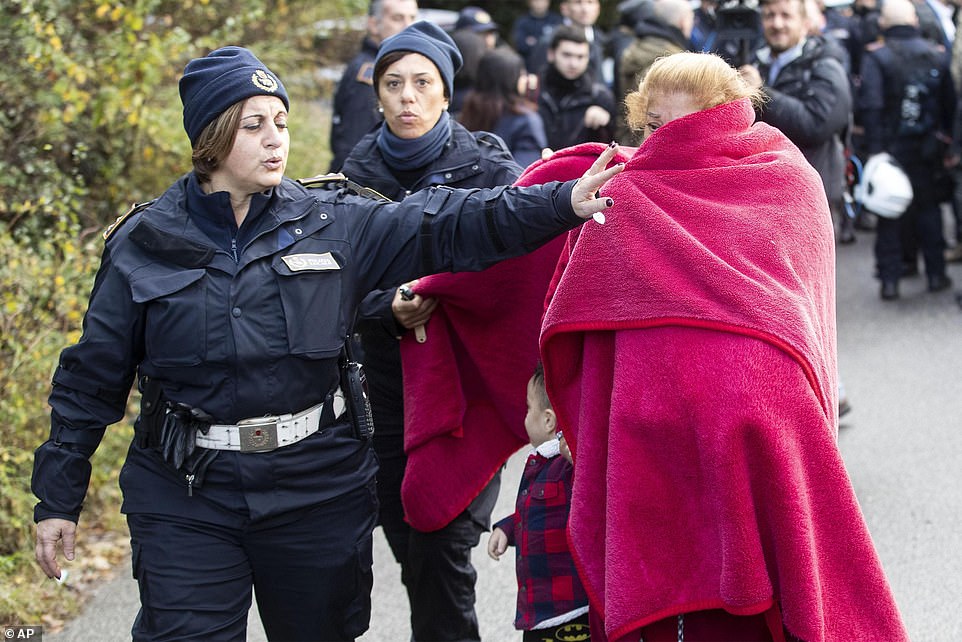 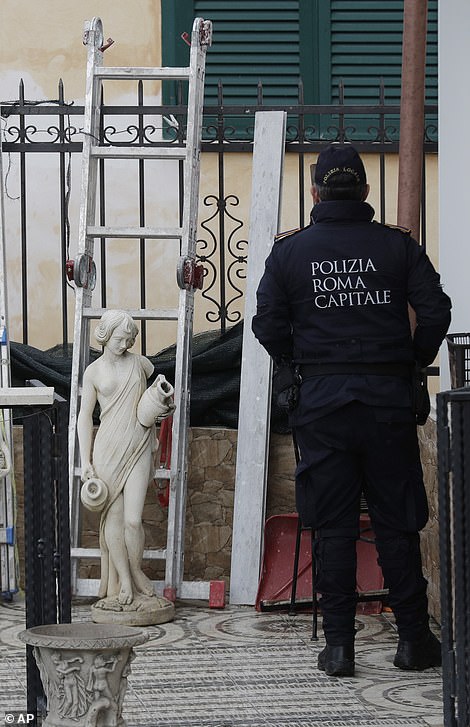 A police officer surveys the typical aesthetic of the Casamonica crime family, which incorporates neo-classical elements and incorporates Hollywood portrayals of the Sicilian Mafia

The gang are infamous for terrifying anyone they encounter to ensure nobody testifies against them.

‘They are animals who chop people up,’ one police witness said.

An Italian comedian became one of their victims, after he allegedly handed over 600,000 euros to repay a 10,000 euro loan.

The summer raids turned up 50,000 euros in cash, current accounts, cars and dozens of luxury watches.

Anti-mafia prosecutor Michele Prestipino said: ‘They didn’t need to use violence, the Casamonica name was enough.’

Further intelligence led police to storm these eight homes in the early hours of Tuesday morning.

Raggi said some of the villas confiscated on Tuesday had been built in areas of archaeological interest. ‘Some houses had even incorporated whole features of the historic Felice Aqueduct,’ she said, referring to a 16th century city waterway.

Deputy Prime Minister Matteo Salvini, who heads the far-right League party, has promised to join in when the bulldozers set to work on the villas. ‘The party is over,’ he said on Monday as he visited the police operations room.

In previous raids, cops arrested 39 Casamonica members in 2012 that failed to make an impact due to the widespread structure of their powerful network.

As part of another raid in 2010, they seized 10 million euros-worth in assets from luxury cars, properties, land and bank accounts.

Who are the Casamonica mafia?

The Casamonica mob rose to notoriety in the 1980s and 90s – just as Italian cops were looking to crack down on the activities of other organised crime units.

The clan is thought to rake in millions from illegal money lending, drugs and prostitution as part of a complex network in Rome.

They work with other gangs – including Nigerian gangsters – who have ties to the feared Ndrangheta and Camorra groups in the south and east of The Eternal City.

They became known for charging huge interest on loans, such as demanding an Italian comedian pay 600,000 euros back on a 10,000 euro loan, .

Victims refuse to come forward to testify for fear of violent repercussions, a testament to Casamonica’s menacing influence felt in parts of the country where they operate. 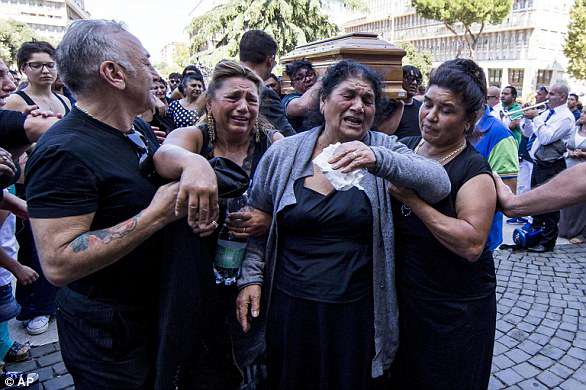 A 2015 counted more than 1,000 members across 43 families while the crime empire they’ve built is reportedly worth 90 million euros.

That same year they made headlines for holding an extravagant funeral for founder Vittorio Casamonica.

His coffin was pulled by six black stallions on a carriage as a helicopter flew overhead dropping red rose petals on streets lined with mourners.

An orchestra played the theme music of Francis Ford Coppola’s The Godfather as he was carried at the ceremony.

There was further outrage when Italian state broadcasters hosted the deceased’s daughter and grandson on a current affairs show. 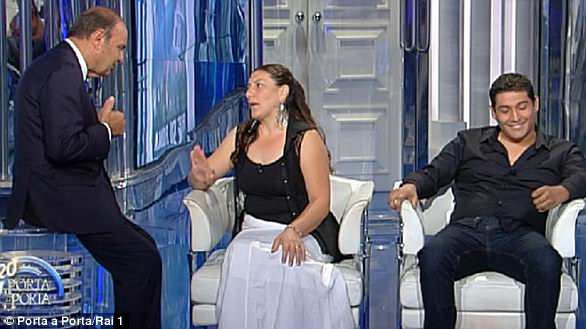 Ex-medical student sentenced in diplomat's shooting in...
Chris Brown to sue French model for defamation over rape claims
Geopolitical analyst Phil Diacon details why the Strait of Hormuz is so chaotic and volatile
Michelle Mone's daughter trades exotic holidays for deprived Glasgow East End where mum grew up
Schoolgirl, 15, reveals how she got her father jailed by filming him attacking her mother
Irish deputy PM Simon Coveney hits out at UK Brexit plan
Homicide detectives investigate as couple are found dead with serious injuries in Birmingham
UK plan to exempt France from travel quarantine must apply to all of EU, European Commission warns