The Eurosceptic conceded that too many MPs believed there should only be a Tory no-confidence ballot if the PM loses a Commons vote on the package thrashed out with the EU.

But he insisted the ‘strength of feeling’ was much stronger than the number of letters calling for challenge would suggest.

At a press conference this morning Mr Rees-Mogg insisted ‘patience is a virtue’ and warned Mrs May her Brexit deal would not pass Parliament after she ‘alienated’ the DUP.

His comments came number of confirmed Tory no-confidence letters stalled at 26 – well short of the 48 needed to trigger a full vote.

The failure to reach the key threshold, days after Mr Rees-Mogg declared an all-out attack on Mrs May’s deal, sparked bitter recriminations. One senior MP who has submitted a letter jibed: ‘Where are these great titans of Brexit? The answer is, they’ve bottled it.’

Brexiteers including Mr Rees-Mogg and David Davis are trying to get on the front foot again today by holding a press conference pushing for a looser -style relationship with the EU. 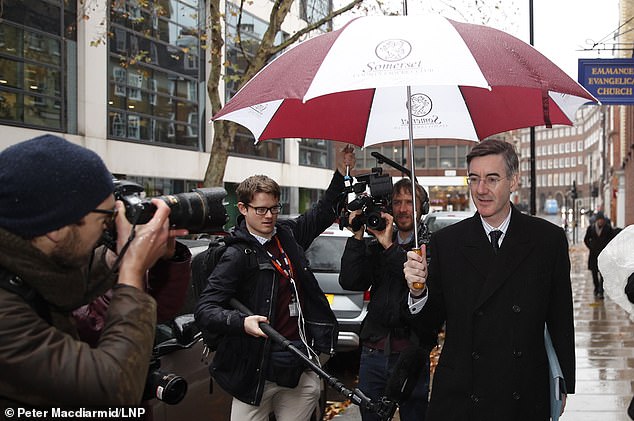 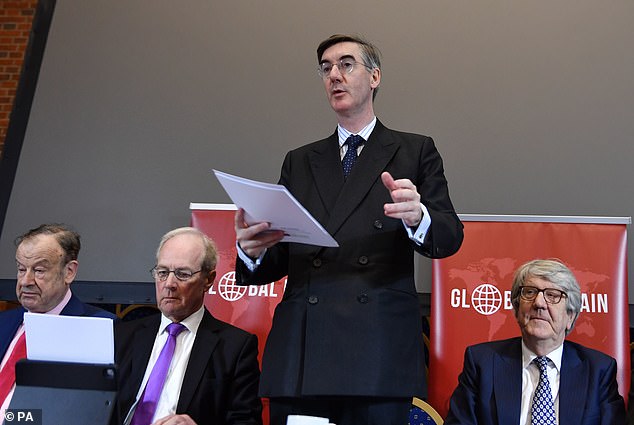 But the pressure on them intensified today as former foreign secretary Lord Hague warned they risked neutering Brexit and turning the UK into the ‘laughing stock of the world’.

The plotters were also facing a growing backlash from Tory moderates who fear bringing down Mrs May could wreck Brexit or usher in a Corbyn government.

Foreign Secretary Jeremy Hunt said those seeking to remove Mrs May risked ‘the most appalling chaos that could be immensely damaging to our national reputation, but also destabilising and potentially stop us getting through to the other side of Brexit’.

He said Mrs May was ‘by far the best-placed person’ to ensure the UK left Europe on friendly terms, adding: ‘Backing her is the right thing to do.’

And in a comment apparently aimed at plot leader Mr Rees-Mogg and fellow Old Etonian Boris Johnson, the former minister Nick Boles said: ‘Do my colleagues not understand how normal people react when they see a group of middle-aged men, led by two plummy-toned Old Etonians, trying to bully a conscientious and determined woman out of her job?’

In his column in the Telegraph today, Lord Hague urged MPs to hold back from writting no-confidence letters.

‘Credible, alternative plans to the Brexit deal put forward by the Prime Minister are in short supply,’ he wrote.

‘There are plenty of other wishes, hopes, beliefs and passionate speeches, but they are not a plan.

‘By “plan”, I mean something you can actually do, not just want.’

Lord Hague said forcing Mrs May out would mean a Tory leadership contest that would take six to seven weeks.

‘With Brexit meant to be only weeks away, and the crucial deadline of January 21 – after which Parliament debates other options – perhaps only days away, he or she would need to ask for more time and a deferral of the exit day, currently set for March 29,’ he added.

He said the EU would probably refuse unless the UK was ready to abandon Brexit ‘altogether’.

That would leave the new PM with ‘three terrible options’.

They could either pursue a ‘weaker’ Brexit, resign, or try to force through no-deal Brexit.

He warned that the first would lead to Britain being the ‘laughing stock of the world’, while the other choices would mean a general election as Tory Remainers would side with the Opposition to bring down the government in order to avert no deal Brexit.

‘In such an election, Jeremy Corbyn would find he could only keep his own party together, and seal victory, by promising a second referendum. The nation would then have to endure all the bitterness and trauma of that, but with Marxists in power at the same time,’ Lord Hague wrote.

Failure to hit the 48 target led to tensions within the European Research Group (ERG) behind the plot.

There was anger that a number of senior Brexiteers – including Iain Duncan Smith, Owen Paterson, Priti Patel and Sir Bernard Jenkin – have not publicly backed the plot despite denouncing Mrs May’s deal.

Senior MPs hit back at the plotters, singling out former Brexit minister Steve Baker, who said last week the 48 names were in the bag.

A source said: ‘Even as a Tory Brexiteer who would like May gone, I take delight in seeing Steve Baker publicly humiliated like this.

‘Since his resignation, he has pranced about pretending to be a statesman.

‘He is a self-aggrandising joke and his colleagues view him as a laughing stock.’

One of the problems facing the group is the lack of an obvious successor to Mrs May outside the Cabinet.

Mr Johnson has made little secret of his ambitions – but Mr Davis, Dominic Raab are unlikely to clear the way for him.

Plans for five Eurosceptic Cabinet ministers to issue an ultimatum to Mrs May over her Brexit deal this week also fizzled out, amid divisions over tactics.

Trade Secretary Liam Fox penned an article in support of the PM, while Michael Gove also said he backed her, and Chris Grayling is thought to be on board. 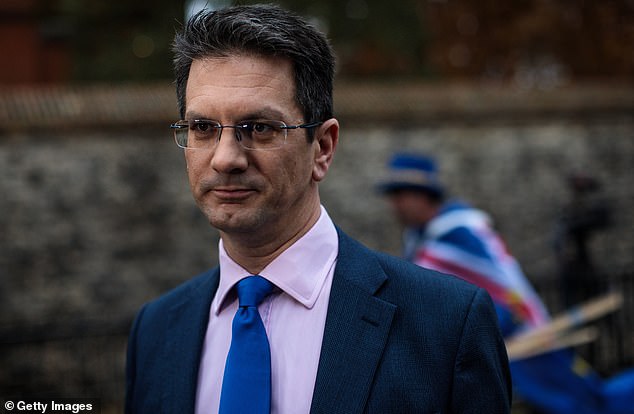 Senior MPs hit back at the plotters, singling out former Brexit minister Steve Baker (pictured), who said last week the 48 names were in the bag

Commons Leader Andrea Leadsom and Aid Secretary Penny Mordaunt are still thought to be mulling their positions – but the threat seems to have receded.

The PM appeared to buy off some senior Brexiteers, including Mr Duncan Smith and Mr Paterson, last night by offering to look at their proposals on the Northern Ireland border.

Mr Rees-Mogg, the ERG’s chairman, and Mr Baker, the former chairman, published their letters of no confidence on Thursday and urged others to follow suit.

Mr Baker told ERG members on Friday the target had been hit, with another 12 letters in reserve. But he was later forced to backtrack.

Yesterday morning Simon Clarke, another prominent ERG member, declared the target was about to be reached.

He said: ‘I think the moment of truth is upon us.’

Former minister David Jones and backbencher Marcus Fysh were both said to have written letters.

However, they are refusing to confirm them publicly.

Other ERG members such as Sir Edward Leigh, Sir Desmond Swayne, Michael Fabricant and Jack Loprest say it is the wrong time to submit a letter.