Five of the Queen’s protection soldiers have been arrested after a late-night brawl in a kebab shop near Windsor Castle, it has been claimed.

The scrap involving drunken Coldstream Guards is said to have taken place at Ramsey’s Grill last Friday while the Queen was at her nearby residence.

The soldiers were allegedly caught up in a fight involving at least eight people before several men were reportedly seen hurrying back to Victoria Barracks where the soldiers are based,  reported. 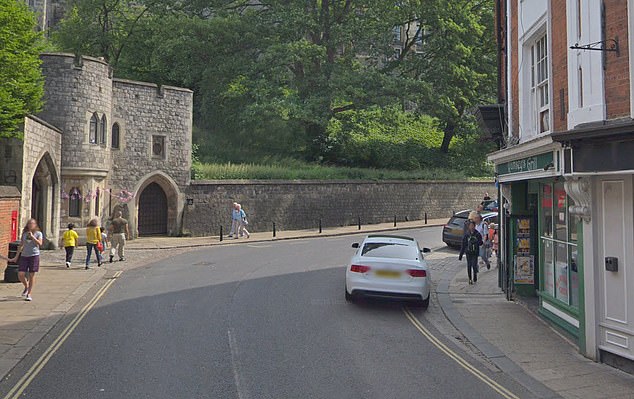 The scrap involving drunken Coldstream Guards is said to have taken place at Ramsey’s Grill, pictured on the right of the street, last Friday while the Queen was at her nearby residence

A source told the newspaper that no-one knew what the fracas was about, saying: ‘The five lads were on the smash.

‘They left a pub and on the way home went to a kebab house where there was an altercation with these blokes.

‘Three got nicked there and then, and two more later on in the barracks. It just kicked off.’

The kebab shop’s owner said the fighting had ‘quickly escalated’ and spilled out on to the street.

Police said five men aged 21, 22, 23, 26 and 27 were arrested and then released as the investigation continued.

The Army reportedly confirmed that five of the soldiers had been arrested after an ‘incident’ near Windsor Castle. 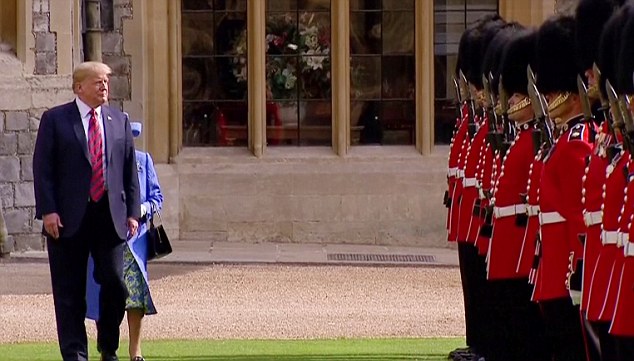 The 1st Battalion Coldstream Guards, in their red tunics and bearskins, greeted U.S. President Donald Trump when he visited Windsor Castle to meet the Queen in July (pictured)

Earlier this year it was reported that a Coldstream Guardsman who was the first to wear a turban during Trooping the Colour was under investigation for alleged drugs misuse.

Charanpreet Singh Lall, 22, was allegedly one of three soldiers who allegedly failed a random drugs test at Windsor’s Victoria Barracks.

The 1st Battalion Coldstream Guards, in their red tunics and bearskins, greeted U.S. President Donald Trump when he visited Windsor Castle to meet the Queen in July.

The Band of the Coldstream Guards and the Band of the Grenadier Guards played the U.S. national anthem when Mr Trump and his wife arrived.

Coldstream Guards, nicknamed ‘Lilywhites,’ were formed in the English Civil War when Oliver Cromwell gave Colonel George Monck permission to have his own regiment.

After Cromwell’s death, Monck supported the monarchy and on January 1, 1660, crossed the River Tweed into England at the village of Coldstream and began a five-week march to London.