This is the dramatic moment a Spitfire came within 40ft of smashing into a giant Chinook helicopter.

According to a report into the near miss, the helicopter’s co-pilot shouted ‘Vacate immediately’ when he spotted the Second World War fighter plane heading towards them.

The Chinook pilot, who was hovering at 25ft following a practice flight for an air show at RAF Cosford in Shropshire, instinctively hurled his helicopter out of danger as the Spitfire roared past. 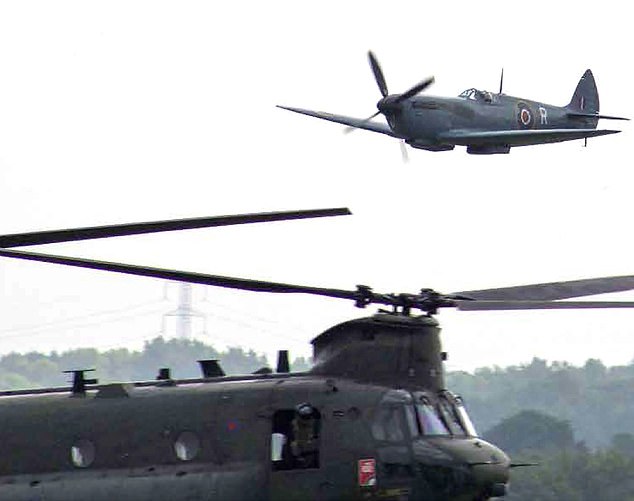 Joint Helicopter Command chiefs later praised the Chinook’s crew for their ‘swift and calm reaction’ which ‘certainly prevented a potentially disastrous’ collision on June 9, the day before an air show attended by 60,000 people.

The report, by the UK Airprox Board, which investigates aviation near misses, claims the experienced Spitfire pilot had made ‘dangerous assumptions’ and had ‘reduced situational awareness’.

Radio transcripts show that an air traffic controller gave permission for the Spitfire to land, but warned about the helicopter above the runway.

The Spitfire pilot claimed he only saw the helicopter as he approached. 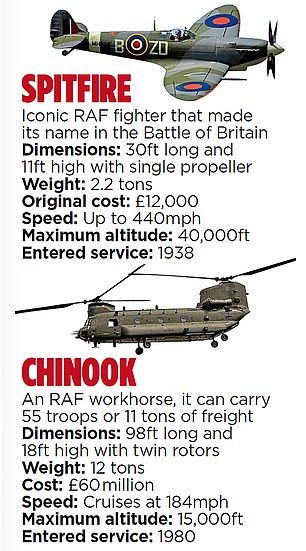 The controller also said he had expected the Spitfire to approach at a minimum height of 500ft – the lowest level for approaches under military regulations – but investigators found that air-show organisers had not given documents to pilots to make that rule clear.

The Spitfire pilot said he had flown at the air show for 14 years at the same low level without ever being ‘questioned or criticised’.

The near miss was rated as a Category B incident where ‘safety had been much reduced below the norm’.

The Spitfire was a PR MK XI model owned by pilot Peter Teichman.

Built in 1944, it features in his Hangar 11 collection of vintage warplanes kept at North Weald in Essex.

It is not known if Mr Teichman was flying the Spitfire on June 9 and he did not respond to requests to comment.

The plane – one of about 20,300 Spitfires made in different models – was used during the Second World War for reconnaissance, assessing the damage inflicted by Allied bombing.