Comedian Sir Billy Connolly has been pictured for the first time since Sir Michael Parkinson claimed he could no longer recognise his friends.

The Scottish comedian, rebutted his longtime friends’s comments about the effect of his Parkinson’s disease on his memory, as he met up with a young girl who’s been raising money for Parkinson’s UK.

The seven-year-old has been rewarded for her charity fundraising efforts with a visit from her hero, Connolly, after she was inspired to raise money for charity following a class project about the comedian. 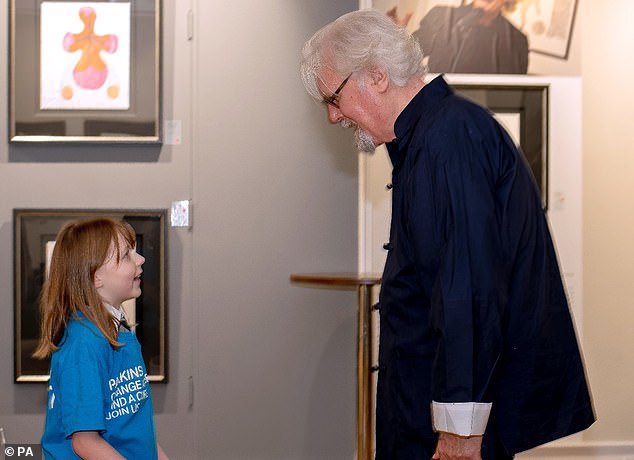 Abby McConnell, left, got to meet comedy legend Billy Connolly after the seven-year-old raised more than £1,200 for Parkinson’s UK. The Big Yin, right, suffers from the disease 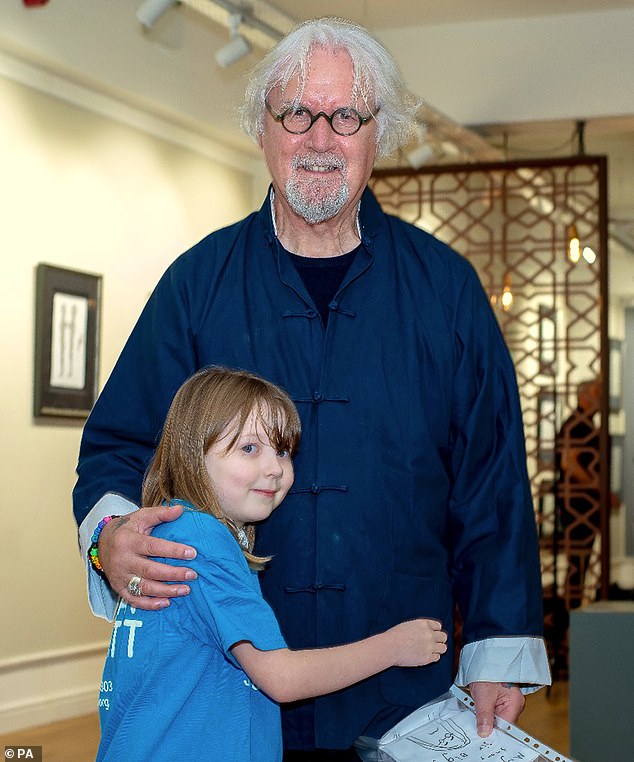 Sir Billy was diagnosed with Parkinson’s disease several years ago. He said ‘art is his life now’

Sir Billy, who was diagnosed with the condition several years ago, said it was a ‘privilege’ to meet the Mount Florida Primary pupil who so far has collected £1,200.

Abby said: ‘I can’t believe I got to meet my hero. Sir Billy was so nice and he even gave me a kiss.’

Her mother Karen added: ‘There isn’t a day where Abby doesn’t talk about Sir Billy.

‘Meeting him was wonderful, he spent ages chatting with Abby and she’ll remember this day forever.’

Sir Billy, in Glasgow to launch his new art exhibition Born On A Rainy Day, said: ‘For Abby to show caring for Parkinson’s disease at her tender age shows kindness beyond belief. Meeting her was a privilege.’

Meanwhile the funnyman said his ‘art is his life now’ as he unveiled a new exhibition of his work in Glasgow.

Born On A Rainy Day is the latest installment in his collection and includes 25 new sketches.

In 2013, the comedian revealed he had been diagnosed with Parkinson’s and prostate cancer on the same day but has since been given the all clear for cancer.

He told BBC Scotland: ‘I get up in the morning and feed the fish. I catch them in the afternoon, and then I draw and I have this idyllic life.

His first exhibition was unveiled in 2012, with his art being described as similar to surrealist automatism as well as cave paintings from the Aurignacian period.

Sir Billy, a folk musician before he pursued comedy, has previously spoken of having to give up his beloved banjo because of Parkinson’s.

On the subject of his health, he told the broadcaster: ‘I’m okay, I’m having a kind of shoogly day today, the nerves and stuff, I’m kind of shaking a bit.

‘It varies from day to day, today is slightly shoogly, but otherwise I’m perfectly okay.’

Wayne Rooney scores 2 objectives, DC United beats Timbers 4-1
Neighbour claims she 'heard domestic abuse between Alesha MacPhail's father and his girlfriend'
A hero SBS officer among The Brexit Party's new candidates
Baby born without any skin on its body defies doctors' grim prognosis
Rail firm fined £1million after passenger killed leaning out of window on Gatwick Express
Three US Stealth Bombers - costing $2.1bn EACH - take off from RAF air base for training in Europe
America shuts down as Congress is warned 150MILLION will be infected with coronavirus
EasyJet joins Ryanair to ground majority of its fleet from next Tuesday amid coronavirus travel ban