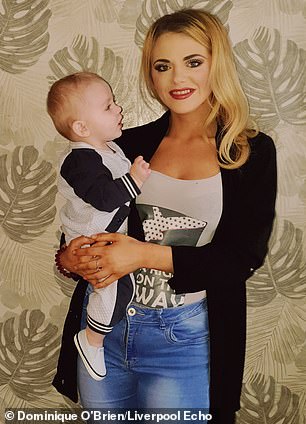 Dominique O’Brien (right), 25, said that her ‘whole world fell apart’ when nurses gave her the news that her son Elliott (left) had no fingers on one hand

A mother-of-two has slammed medics who failed to spot that her baby was missing some of his fingers during a scan just four days before her C-section.

Dominique O’Brien, 25, said that her ‘whole world fell apart’ when nurses gave her the news that her son Elliott had no fingers on one hand after his birth in February.

She is now considering sterilisation after losing faith in the medical community which failed to spot her baby’s condition.

Dominique, from Netherton in Liverpool, decided to have growth scans throughout her second pregnancy after her first born Ethan was born extremely small.

However her child’s condition – Symbrachydactyly, which affects 1 in 32,000 children – remained undetected in every scan she had done.

During one of the scans, the mother claims a nurse even said to her ‘look at your baby waving at you’.

She has since launched a petition, after discovering that it’s not routine to check for fingers and toes in scans and there’s no legal obligation to. 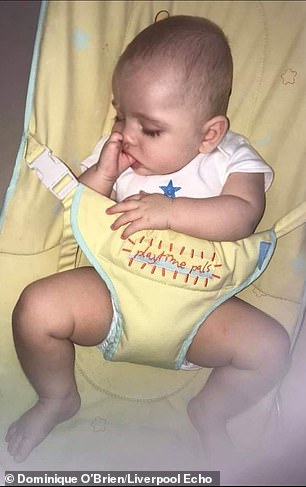 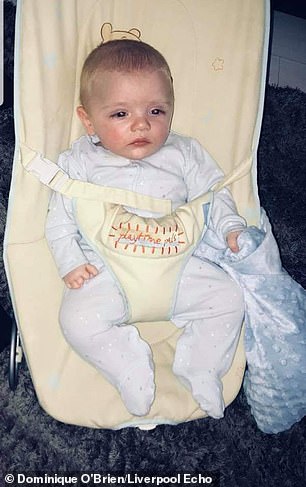 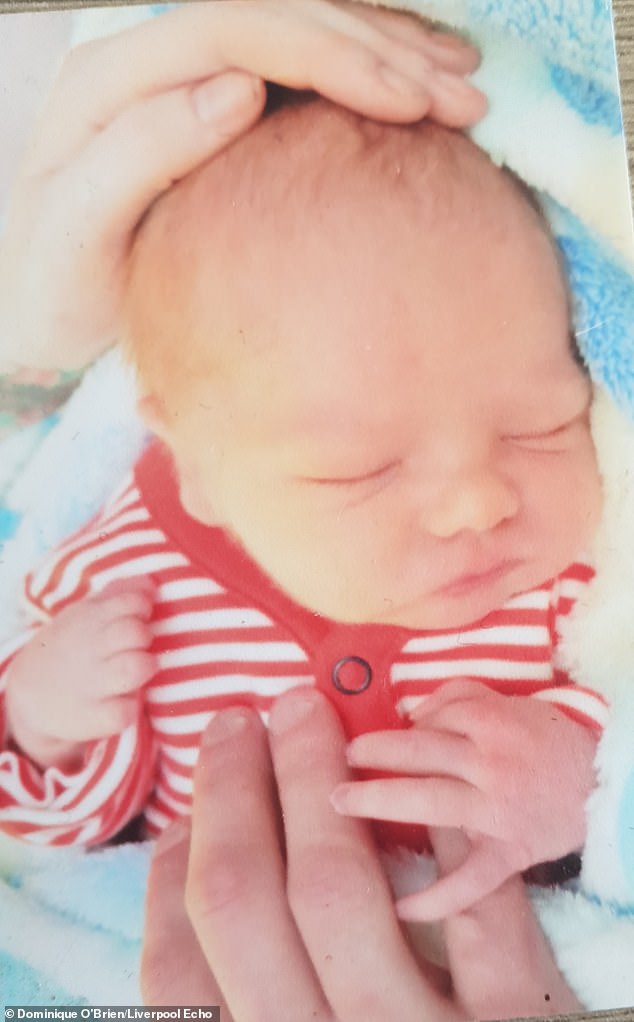 Elliott has a hand, but very short digits, with his pinky finger almost non-existent

Dominique, who gave birth at Liverpool Women’s Hospital, said: ‘I remember going for my 32 week scan with Elliott and the lady doing the scan saying ‘look at your baby waving at you’.

‘I had a scan four days before my c-section and nothing was picked up on that. As I went in to give birth the nurse asked me if I wanted her to take pictures of the baby coming out on my phone and I said ‘yes’.

Babies who have symbrachydactyly are born with short, webbed or missing fingers.

This typically only happens on one hand with the other hand having fully formed fingers.

These finger bones may be smaller or stiffer than is typical.

In rarer cases, the fingers are missing bones which results in little stumps of skin and soft tissue in place of the finger.

Usually babies with the condition have a complete thumb, but sometimes it can be short or missing.

The long bones that connect the fingers to the wrist may be short, too.

Some babies have a short forearm as well. The muscles, tendons and ligaments in the hand are also affected.

‘I gave birth and the nurse was reluctant to hand my phone back. That’s when I knew something was wrong.’

Nurses told Dominique her baby had two health issues – the first was that he had a tongue tie and the second part of his hand and fingers were missing.

Dominique said: ‘My world fell apart. If I’d of known about the condition from the start I would have been able to come to terms with it.

‘But I spent months feeling guilty, just thinking I’d done something wrong. I couldn’t enjoy my baby. I just spent all my time worrying about how he would get through life and how he’d be bullied.

‘If I’d have known about his condition – called symbrachydactyly – it wouldn’t have changed anything. I just needed time to prepare.’

Elliott has a hand, but very short digits, with his pinky finger almost non-existent.

Dominique said: ‘The whole experience has made me look into getting sterilised. I’ve lost all my trust and I won’t have any more children now.

‘It’s been really hard and I felt so much guilty. That’s why I launched my petition to get the procedure changed and make it compulsory to check for it in scans, to stop other families going through what I have.’

Barclays online banking and app goes down for the second time in a week
Super mare Winx wins her 28th consecutive race in the Turnbull Stakes at Flemington
Chilling pictures from camera reveal doomed seaplane's final moments before it crashed
Fire in old part of Bangladesh's capital kills at least 45
Gucci are mocked for copying infamous criminal who went viral with his DEVAST8 face tattoo
Could your 'coronavirus' symptoms be a bad case of HAY FEVER?
Joe Biden was among top officials who were sent Mike Flynn's name after it was 'unmasked'
Coronavirus UK: Death toll hits 37,837 with 377 new fatalities