Lions are famously known as the king of the animal kingdom.

However one small pooch attempted to overthrow their rule as he confronted a pair of big cats while strolling through a Tanzanian tundra in East Africa.

The clip shows one fearless dog run up to them with confidence as he barked and wagged his tail at the lion and lioness, who were believed to be mating before he interrupted. 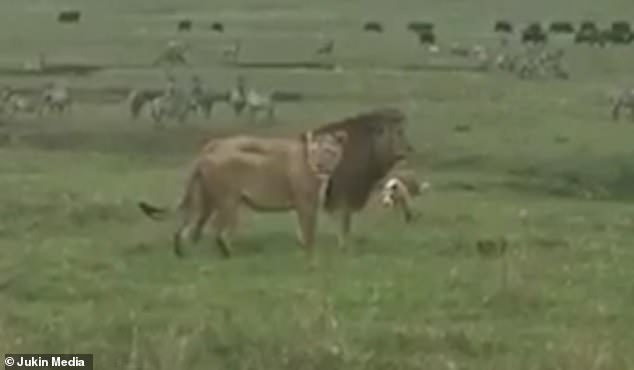 At first the duo seem uninterested in the dog’s attempt to greet them, however moments later it leaps towards the bewildered lion.

Clearly shocked by the canine’s boldness, the lion stumbles back as the dog continues to jump at him.

The dog then appears to decide that he may have bitten off more than he can chew, slowly backing away from the lion.

He can be seen trotting off into the distance as the bemused lions stare after him as he makes his getaway. 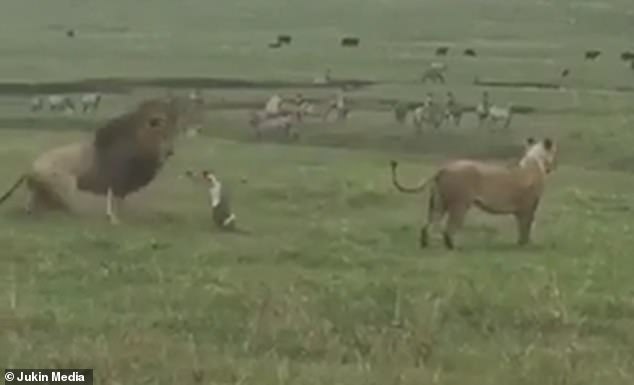 At first the duo seem uninterested in the dog’s attempt to greet them, however moments later it leaps towards the bewildered lion

Political pundit reported 'MAGAbomber' on Twitter for making death threats after she appeared on Fox
Army veteran tells court he was hired to kill a Virginia woman and her son in custody battle
Teens who posed in high school prom photo throwing up the Nazi salute REFUSE to apologize
Woman is jailed for 15 years for viciously beating a 91-year-old grandfather with a BRICK
Dateless 16-year-old takes HIMSELF to prom wearing half-suit, half-dress
Inside the fabulous 'camp' themed Met Gala decorated with flamingos
Equinox and SoulCycle members launch BOYCOTT over owner Stephen Ross Trump fundraising
Trump lambasts John Bolton for not coming forward with his Ukraine 'nonsense' early on