is braced for more resignations today after Dominic Raab sensationally walked out as Secretary but delayed his departure for 24 hours in a last-ditch effort to help her.

Mr Raab quit in dismay at ‘fatal flaws’ in the draft withdrawal deal, despite spending months in negotiations after he replaced David Davis in July.

His departure, which has fuelled accusations he is manoeuvring for a leadership bid, sparked a series of resignations which may continue today.

Michael Gove’s future is unclear after he reportedly turned down the chance to replace Mr Raab, as the PM refused to let him renegotiate the deal with Brussels himself.

International Development Secretary Penny Mordaunt and Transport Secretary Chris Grayling are also rumoured to be on the verge of quitting the Government. 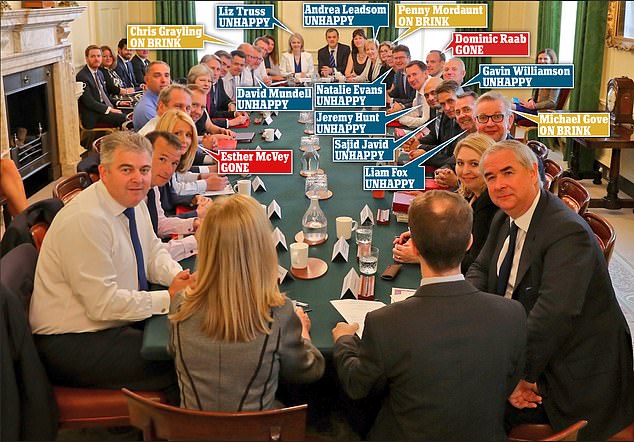 Ms Mordaunt used meetings with Mrs May and Cabinet Secretary Mark Sedwill to argue that there should be a free vote in the Commons on the Brexit deal.

That would liberate her from collective responsibility, allowing her to remain in Cabinet while voting against the plan, but government sources indicated that ‘not a lot’ changed as a result of the meetings.

Meanwhile Commons Leader and pro-Brexit MP Andrea Leadsom insists she has no plans to quit the Cabinet.

Mr Gove considered the job offer a ‘poisoned chalice’ which would force him to deliver a Brexit deal he did not believe in, the Times reported.

The Environment Secretary had delivered his ultimatum to Theresa May 15 minutes before she was due to face the cameras.

Mrs May dodged questions about Mr Gove and whether she was struggling to fill her empty Cabinet posts when she appeared at a press conference in London.

Mr Raab – who was last night the bookmakers’ favourite to succeed Mrs May – is said to believe he was blindsided by the final Brexit deal, and that it had been changed when it was shown to the Cabinet on Wednesday.

Sources said he was thrown by a new commitment that said the backstop arrangement – a hybrid of the customs union and single market – would be the starting point for negotiations on the future EU-UK trade relationship. 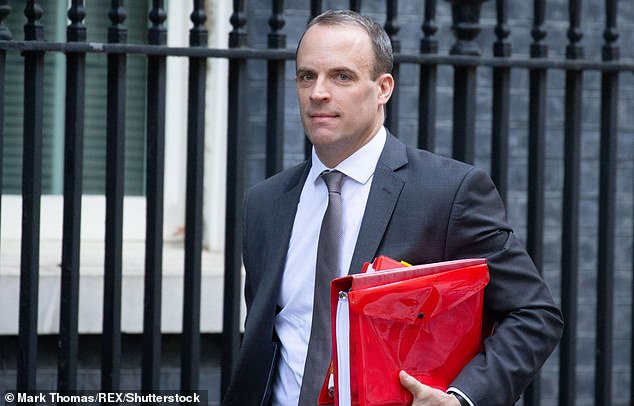 Dominic Raab (pictured) is said to believe he was blindsided by the final Brexit deal, and that it had been changed when it was shown to the Cabinet on Wednesday 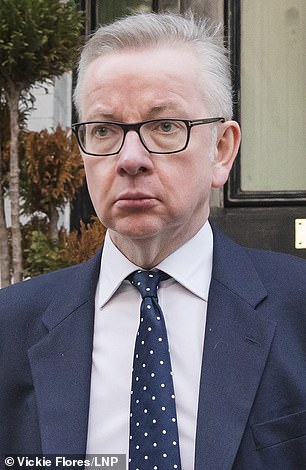 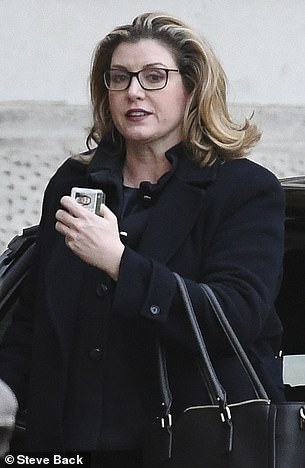 Mr Raab reportedly knew he would quit when he sat in the five-hour Cabinet meeting on Wednesday, feeling ‘mugged off’ by the proposals.

He had been due to fly to Brussels for a joint celebratory announcement with EU negotiator Michel Barnier but had already made his mind up to resign.

But he agreed to postpone his resignation as a favour to the PM, giving her time to make her statement outside Downing Street, reported.

The Leave campaigner yesterday urged the Prime Minister to go back to Brussels with a ‘best, final offer’.

His decision, announced just before 9am, piled pressure on Mrs May. He was blasted by a Cabinet colleague who branded him a ‘carpet-bagger’ – a derogatory term for someone who takes advantage of a situation.

He was also criticised by Remain-supporting Tory MP Anna Soubry, who said on Twitter that his treatment of the Prime Minister had been ‘shameful’. She said: ‘Raab signed up to her Withdrawal Agreement allowing her to make her statement after Cabinet knowing he’d resign in time for the 9am News bulletins the next morning.’

In his letter to Mrs May, Mr Raab said the proposals on Northern Ireland threatened the integrity of the UK and Britain would be locked indefinitely into a customs union ‘backstop’ with no say on the rules and no exit mechanism.

He wrote: ‘No democratic nation has ever signed up to be bound by such an extensive regime, imposed externally without any democratic control over the laws to be applied, nor the ability to decide to exit the arrangement.’ He added: ‘I cannot in good conscience support the terms proposed for our deal with the EU.’

He claimed the deal would damage both the economy and public trust. Sources said he was thrown by a new commitment that said the backstop arrangement could work as a model for the future trade deal. ‘Everyone was shocked,’ said the source. ‘He asked ‘Who mandated this?’ but there wasn’t an answer.’

Following the five-hour Cabinet meeting on Wednesday, Mr Raab took Chief Whip Julian Smith in a side-room and said that he could not sign up to the ‘indefensible’ deal and would have to resign. 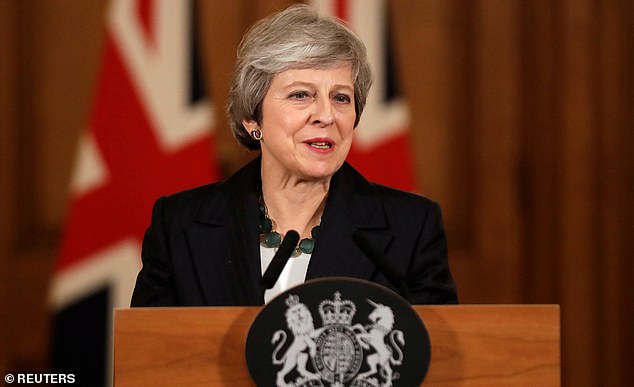 Mr Raab told the BBC yesterday: ‘I’ve been fighting for a good Brexit deal but the terms proposed had two major and fatal flaws. The first is that the terms threaten the integrity of the United Kingdom and the second is they would lead to an indefinite if not permanent situation where we’re locked into a regime with no say over the rules, with no exit mechanism.’

In a later interview, Mr Raab said Mrs May had to ‘change course’ to get the deal past Parliament. He added: ‘We need to go back to Brussels and make a best, final offer. I think we can do a deal with our EU partners but at the same time we must be willing to show some resolve to walk away. That would cause short-term disruption but we can manage it.’

Mr Raab became the second Brexit Secretary to quit in four months. He had been promoted to the Cabinet to replace David Davis, who stepped down in protest at Mrs May’s Chequers plan.

Pensions Secretary Esther McVey also quit, saying the deal ‘does not honour the result of the referendum’.

Shailesh Vara quit as Northern Ireland minister, Suella Braverman resigned as a Brexit minister, and Anne-Marie Trevelyan stood down as a parliamentary private secretary in the Department for Education.

They were joined by Ranil Jayawardena, a parliamentary private secretary in the Ministry of Justice, and Rehman Chishti, the Conservative vice-chairman and prime ministerial trade envoy to Pakistan.

Within the Tory ranks some 17 MPs have publicly stated that they have submitted letters of no confidence to Sir Graham Brady, chairman of the backbench 1922 Committee responsible for Tory leadership elections.