The war has split married Tory MPs Jack Lopresti and Andrea Jenkyns down the middle – as he has backed but she is urging the PM to quit.

The MPs – who are both ardent Eurosceptics – got married just before last year and have an 18-month-old son who they nicknamed Brexit Clifford.

But today it emerged they are on opposite sides of the bitter Tory war to oust Mrs May as PM and tear up her Brexit plan.

Ms Jenkyns, MP for Morley and Outwood, is one of Mrs May’s fiercest backbench critics and sent in her letter of no confidence in the PM many weeks ago.

The furious MP said she is ‘dismayed’ and ‘disgusted’ at the PM’s Brexit plan and has  urged her fellow Conservatives to send their letters of no confidence in.

In a tweet she said: ‘Dismayed, disgusted. MPs get your letters in. The only way to save Brexit is a new leader. The fight continues.’ 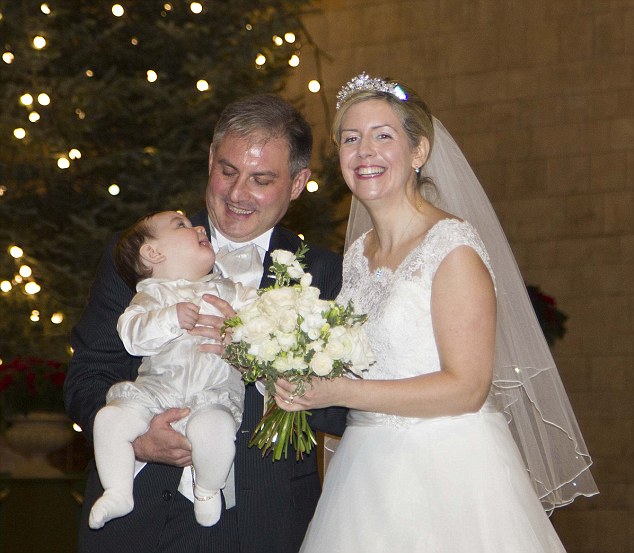 Andrea Jenkyns, MP for Morley and Outwood, is one of Theresa May’s fiercest backbench critics and sent in her letter of no confidence in the PM many weeks ago 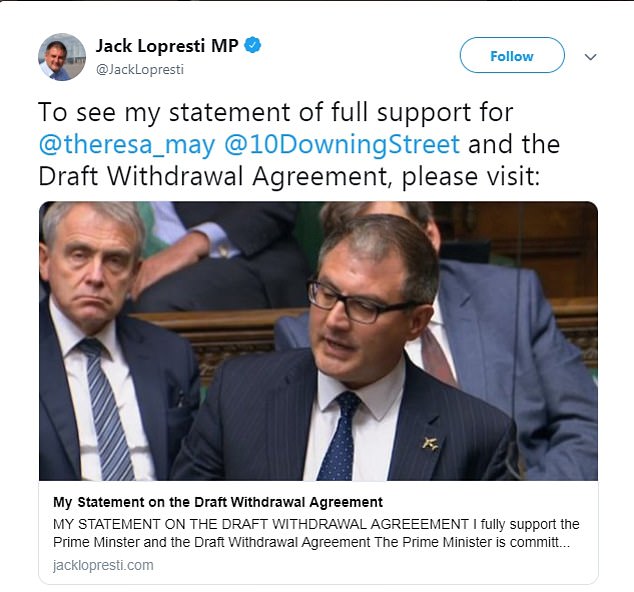 Jack Lopresti said he is staying loyal, saying that he has ‘every confidence’ in the PM and ‘fully supports’ her deal

But her husband Mr Lopresti is staying loyal, saying that he has ‘every confidence’ in the PM and ‘fully supports’ her deal.

In a statement on his website, he said: ‘I fully support the Prime Minster and the Draft Withdrawal Agreement

‘The Prime Minister is committed to delivering Brexit, and I hugely admire her sense of duty and determination to achieve a deal that is in our country’s best interests.

‘I have every confidence in Mrs May, and believe we must continue to support the Prime Minister and put any divisions behind us to secure this deal in the interests of the United Kingdom.

‘We need to be sensible and pragmatic. There was always going to be a need to compromise on both sides.

‘A deal must deliver on the referendum result, which was the democratically expressed wish of the British people.

‘This agreement will see us take back control of our money, laws and borders. It will end freedom of movement, while protecting jobs, security and the union.’

Mrs May is in a desperate battle to save her political career and Brexit plan as she faces a barrage of attacks from all sides.

Some 22 Tory MPs have defied the leadership and announced they are sending letters of no confidence as they join the coup to oust her.

If it reaches 48 then a leadership vote will be triggered – potentially paving the way for her to be toppled from No10 and launching a bitter competition for the leadership.

Furious Brexiteers today doubled down on their attacks on Mrs May today as a former defence minister blasted ‘she just doesn’t listen’.

Mark Francois, the deputy chairman of the Brexit backing European Research Group, blasted the deal saying: ‘Now the details of the deal are available we can see how truly awful it is.’

But Steve Baker – shop steward for the Tory Brexiteers who is coordinating the coup – today admitted he does not know how many no confidence letters have been sent in.

He told BBC2’s Politics Live: ‘My number will be inaccurate because people will withdraw letters, they will tell me they have put letters in when they haven’t, they will take them out and not tell you they have taken them out.’

But he denied that the Brexiteers were ‘all sizzle and no steak’ and that the attempted coup against Mrs May is falling flat.

He said: ‘People have been ringing me and they are telling me that they are putting letters in.

‘I have spoken to colleagues as well and I think we are probably not far off. I think it is probably imminent.’ 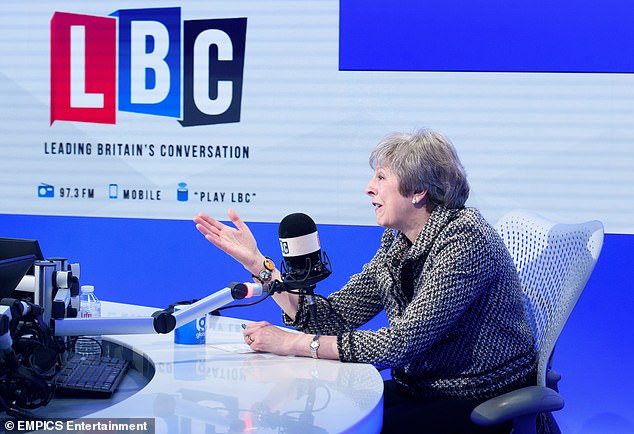 In a phone in on LBC Radio, Theresa May admitted she had ‘concerns’ about the Irish border ‘backstop’ – but insisted the overall package was the best thing for the UK

Cara Delevingne is supported by rumoured girlfriend Ashley Benson at Balmain show
Justin Bieber and Hailey Baldwin bow their heads during an intimate moment in the pop star's car
US STOCKS-Weak results keep S&P, Nasdaq lower ahead of...
Meghan Markle to lose SECOND close aide after private secretary announces she will leave
Could you be in line for a payback from Mastercard? Court revives £14bn damages claim
Eilish McColgan medals stolen after her home was 'ransacked' by burglars
Married mother-of-three, 38, is arrested for 'stabbing to death neighbour's boyfriend'
Coronavirus UK: Testing chaos as NHS swabbing centre EMPTY