ATLANTA (AP) – As Democrats ratcheted up their attacks on Georgia Republican Brian Kemp, he claimed Wednesday that results certified by county election officials confirm he has an “insurmountable lead” in the governor’s race.

At a news conference, Georgia Democrats cast doubt on the legitimacy of any election count that ends with the former secretary of state being certified as the winner of a fiercely fought election against Stacey Abrams, who’s seeking to become the first black woman elected governor in the U.S.

“We believe that Brian Kemp mismanaged this election to sway it in his favor,” said Abrams’ campaign manager Lauren Groh-Wargo, surrounded by Democratic lawmakers at the Georgia Capitol.

Democrats beyond Georgia have started to echo the notion that a Kemp victory would be illegitimate. Ohio Sen. Sherrod Brown said Wednesday that if Abrams loses it’s because Republicans stole the election.

“If Stacey Abrams doesn’t win in Georgia, they stole it. I say that publicly, it’s clear,” Brown, speaking at a briefing for the National Action Network.

Kemp’s campaign, which has repeatedly called on Abrams to concede, repeated that call Wednesday, saying Abrams and her supporters have used “fake vote totals,” ”desperate press conferences” and “dangerous lawsuits” to try to steal the election. 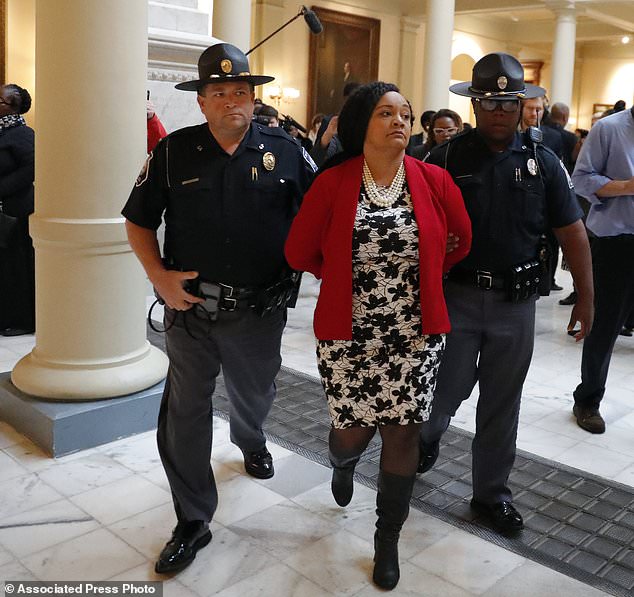 Sen. Nikema Williams (D-Atlanta) is arrested by capitol police during a protest over election ballot counts in the rotunda of the state capitol building Tuesday, Nov. 13, 2018, in Atlanta. (AP Photo/John Bazemore)

“After all of the theatrics, the math remains the same,” Kemp campaign spokesman Cody Hall said in an email. “Abrams lost and Brian Kemp won. This election is over.”

Since he declared himself governor last week and resigned as secretary of state, Kemp’s lead has narrowed as counties have tabulated more ballots. And the numbers could change again as federal courts issue new guidance on counting certain provisional and absentee ballots.

Groh-Wargo said Tuesday that the Abrams campaign believes she needs a net gain of 17,759 votes to pull Kemp below a majority threshold and force a Dec. 4 runoff. Kemp’s campaign said even if every vote that Abrams campaign is arguing for is granted by the courts and counted for her, she cannot overcome his lead or force a runoff.

The Associated Press has not called the race.

Meanwhile, U.S. District Judge Steve Jones on Wednesday ruled that the secretary of state must not certify the state election results without confirming that each county’s vote tally includes absentee ballots on which the voter’s date of birth is missing or incorrect.

The order stems from a request in a lawsuit filed Sunday by the Abrams campaign. But Jones also rejected the campaign’s other requests.

The lawsuit was one of several election-related complaints filed before multiple federal judges.

U.S. District Judge Leigh May ordered Gwinnett County election officials Tuesday not to reject absentee ballots just because the voter’s birth year is missing or wrong. She also ordered the county to delay certification of its election results until those ballots have been counted.

Jones’ ruling effectively extended May’s order to the other 158 counties in Georgia.

State law sets a Nov. 20 deadline, but secretary of state’s office elections director Chris Harvey testified last week that the state had planned to certify the election results Wednesday, a day after the deadline for counties to certify their results. He said that would allow preparations to begin for any runoff contests, including those already projected in the races for secretary of state and a Public Service Commission seat.

Totenberg’s order left untouched the county certification deadline. Candice Broce, a spokeswoman for secretary of state’s office, said Wednesday that all counties but Gwinnett have certified their totals.

With state lawmakers gathered at the Georgia Capitol Tuesday for the start of a special legislative session, dozens of protesters gathered in statehouse rotunda, loudly chanting “Count every vote!” and waving signs with the same slogan. Police arrested 15 people, including state Sen. Nikema Williams, an Atlanta Democrat.

Police zip-tied Williams’ hands behind her back and led her to one of two vans holding other arrested protesters.

She gave a tearful speech on the Senate floor Wednesday, saying she was booked and strip-searched at the Fulton County jail and held for five hours. She said her 3-year-old son heard news of her arrest on the radio and told a baby sitter: “That’s mommy.”

“I didn’t do anything to obstruct anyone from doing their job or their business on the floor,” Williams said. “What I did was I stood with my constituents as they wanted their voices to be heard.”

The Georgia Constitution says legislators “shall be free from arrest during sessions of the General Assembly … except for treason, felony, or breach of the peace.”

GOP Lt. Gov. Casey Cagle asked the Republican chairman of the Senate Public Safety Committee to meet with authorities “to look at the facts surrounding this issue and see if we can bring some kind of resolve to the matter at hand.”

Associated Press writer Russ Bynum in Atlanta and Juana Summers in Washington contributed to this report.

This story has been corrected to say protesters shouted “Count every vote,” not “Count the votes.” 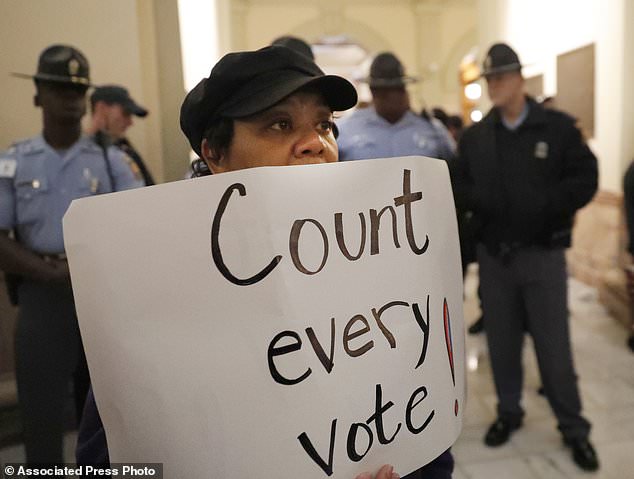 A woman holds a sign as state troopers look on during a protest in the rotunda of the state capitol building Tuesday, Nov. 13, 2018, in Atlanta. Several protesters, including a state senator, have been arrested during a demonstration at the Georgia state Capitol calling for tallying of uncounted ballots from last week’s election. (AP Photo/John Amis) 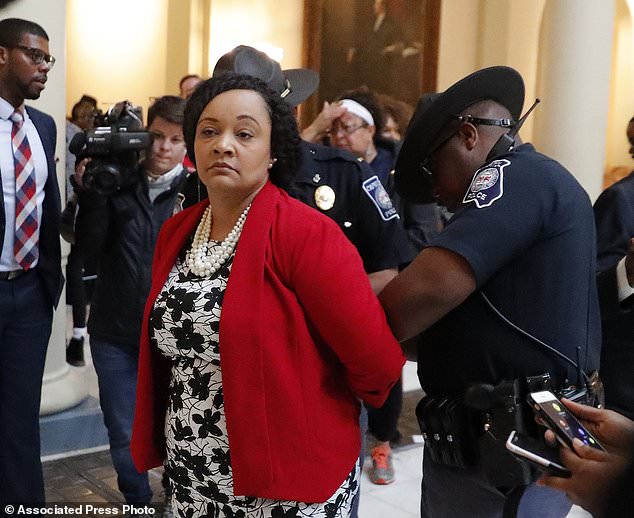 Sen. Nikema Williams (D-Atlanta) is arrested by capitol police during a protest over election ballot counts in the rotunda of the state capitol building Tuesday, Nov. 13, 2018, in Atlanta. Dozens filled the rotunda in the center of the Capitol’s second floor Tuesday just as the House was scheduled to convene for a special session. (AP Photo/John Bazemore) 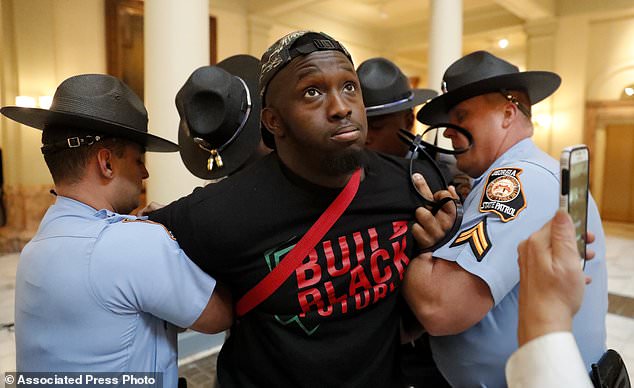 A man is arrested by Georgia state troopers during a protest over election ballot counts in the rotunda of the state Capitol building Tuesday, Nov. 13, 2018, in Atlanta. Several protesters, including a state senator, have been arrested during a demonstration at the Georgia state Capitol calling for tallying of uncounted ballots from last week’s election. (AP Photo/John Bazemore) 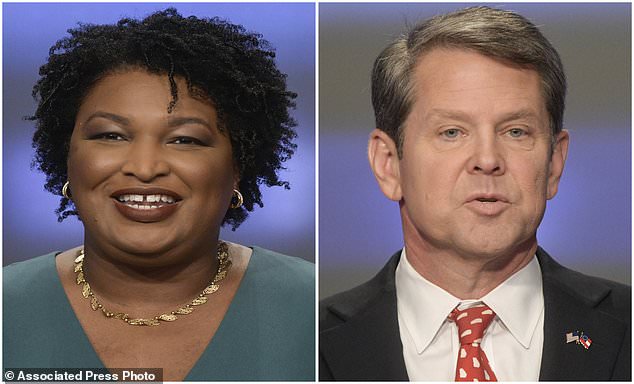 This combination of May 20, 2018, photos shows Georgia gubernatorial candidates Stacey Abrams, left, and Brian Kemp in Atlanta. Georgia’s still undecided race for governor will remain in legal limbo for several more days after a federal court put the brakes on final certification of the vote totals in one of the nation’s hottest midterm matchups. (AP Photos/John Amis, File) 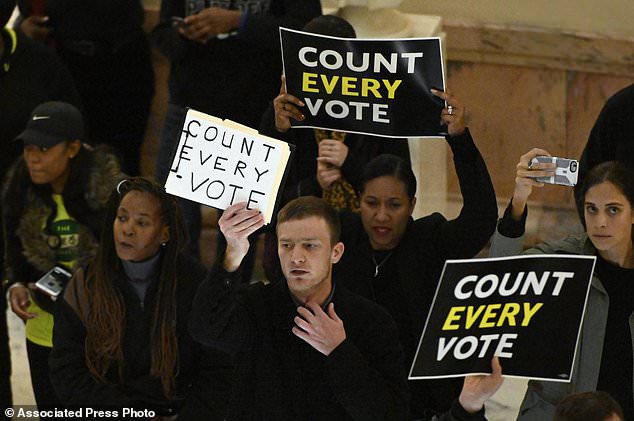 People hold signs as they protest the election in the rotunda of the state capitol building Tuesday, Nov. 13, 2018, in Atlanta. (AP Photo/John Bazemore) 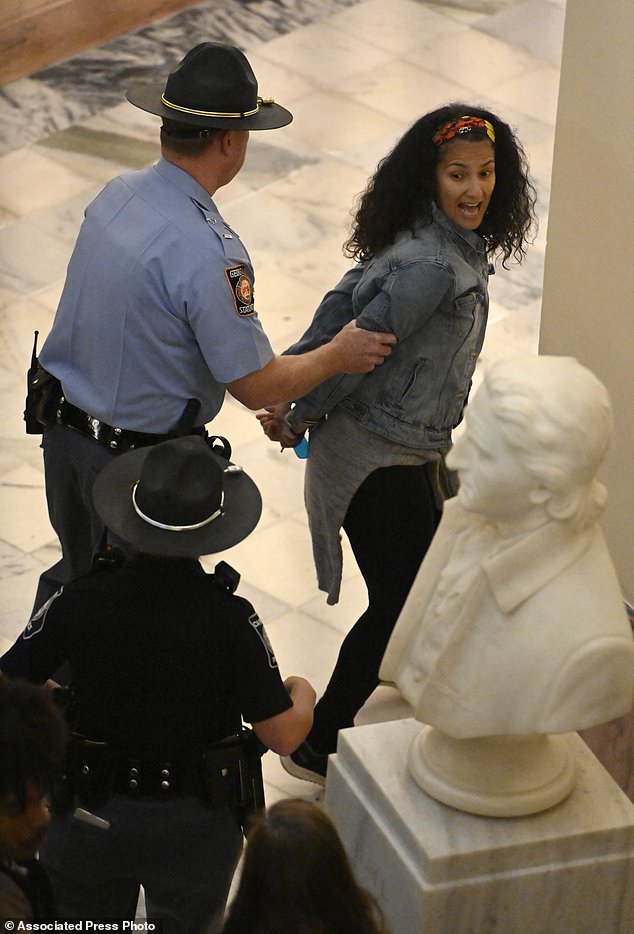 A woman is arrested by Georgia state troopers during a protest over election ballot counts in the rotunda of the state capitol building Tuesday, Nov. 13, 2018, in Atlanta. (AP Photo/John Bazemore) 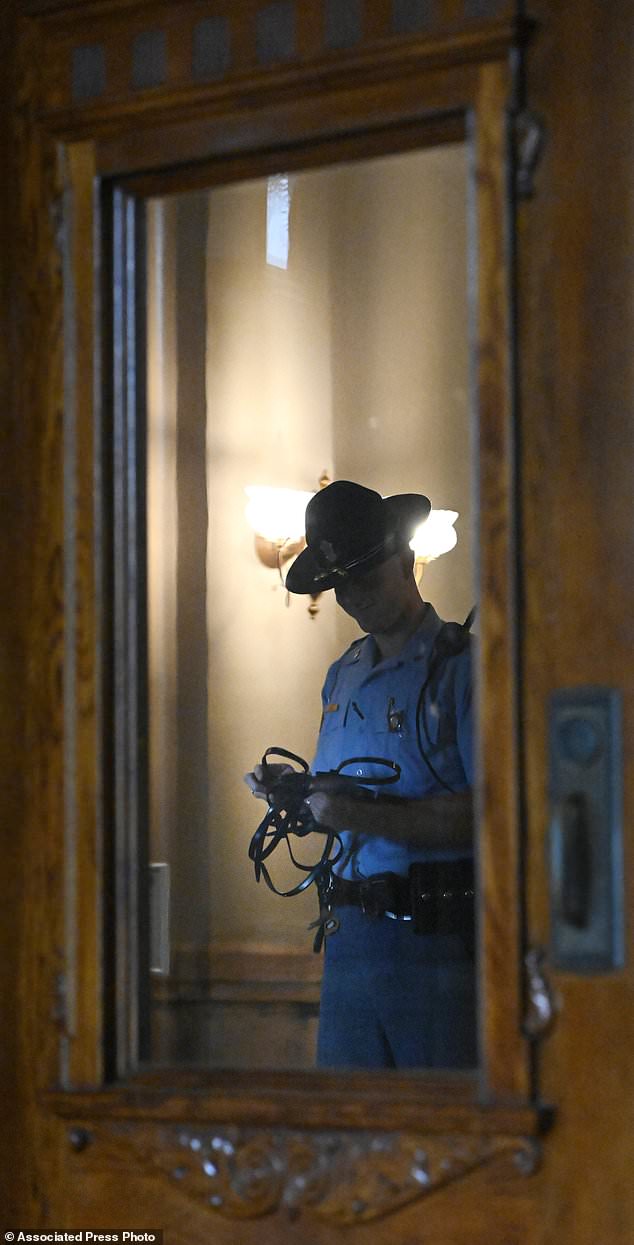 A Georgia state trooper is seen organizing his handcuffs after several people were arrested during a protest in the rotunda of the state capitol building Tuesday, Nov. 13, 2018, in Atlanta. (AP Photo/John Amis) 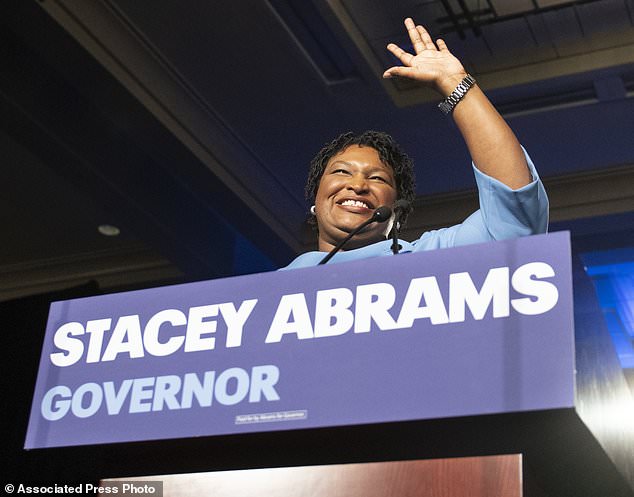 FILE – In this Tuesday, Nov. 6, 2018 file photo, Georgia Democratic gubernatorial candidate Stacey Abrams speaks to supporters during an election night watch party in Atlanta. On Tuesday, Nov. 13, 2018, The Associated Press has found that stories circulating on the internet that U.S. District Judge Leslie Abrams, sister of the gubernatorial hopeful, presided over a complaint related to the too-close-to-call governor’s race, are untrue. (AP Photo/John Amis)