A flight attendant is suing American Airlines after one of her colleagues allegedly attacked her during a flight and dragged her down the aisle by her scarf.

In the lawsuit obtained by the , Kathy Ida Wolfe, 69, claims that Laura Powers ‘maliciously dug her fingernails into my arm and slammed the door of a beverage cart on my arm’ on a flight in June 2016.

She alleges that Powers, 56, then ‘grabbed my scarf, choking me, and dragged me in the aisle and in front of the passengers’. 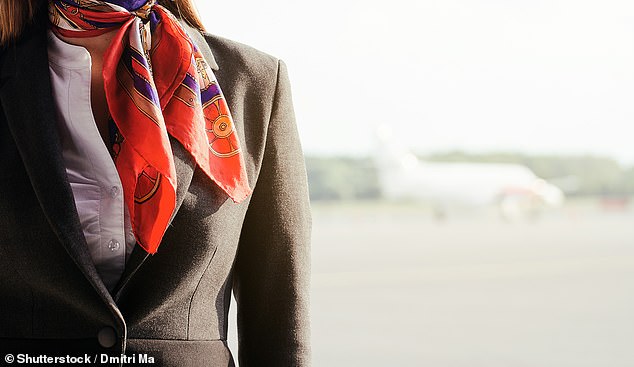 Texas flight attendant Kathy Ida Wolfe has filed a lawsuit claiming that a fellow stewardess, Laura Powers, attacked her in front of passengers during a June 2016 American Airlines flight and dragged her down the aisle by her scarf (file photo)

Wolfe’s lawsuit against American and Powers is seeking damages of up to $1million for negligence, dangerous work environment, breach of contract, and assault and battery.

Wolfe, of Irving, said she immediately reported the attack to the captain, other flight attendants and the flight service manager, following company procedure to the letter.

When the airline ‘failed to investigate and/or take action to ensure [Wolfe’s] safety’, she reported the assault and battery to law enforcement, the suit says.

It does not appear that any criminal charges were filed against Powers, who is from Flower Mound.

The suit was originally filed in Tarrant County in June before being refiled in federal court on Friday.

American and Powers each countersuits claiming that they are ‘not liable because Plaintiff caused or contributed to’ the incident that Wolfe is suing over, according to court records.

American spokesman Matt Miller told the Dallas Morning News that he couldn’t comment on the specifics of the lawsuit but said: ‘American strives to create a work environment in which all team members feel safe and respected.’