This is the shocking moment a mother pushing her young son in a buggy punches an Aldi security guard and spits in his face after staff tried to stop her leaving the store.

Jaw-dropping footage captured by an onlooker showed the small child screaming in terror as his mother verbally abused and assaulted employees for nearly three minutes in front of horrified shoppers at the checkout.

She even used the buggy to ram staff as they barricaded the exit and fumed ‘I will f*** you up’ when one employee tried to move her child away from danger. 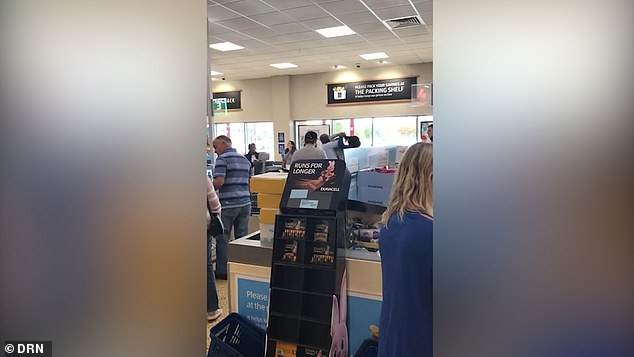 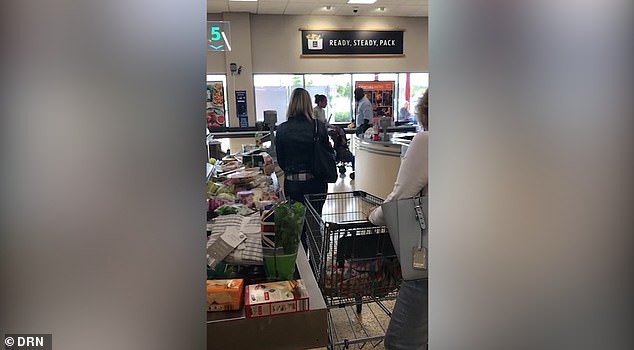 After repeatedly punching, kicking and launching missiles at the security guard he allowed her to leave for the child’s sake – only to be spat at on the way out.

Footage of the supermarket meltdown emerged on social media today, Wednesday 14. An Aldi spokesman said the incident happened at its Westcroft District Centre outlet in Milton Keynes but declined to comment on the footage.

It shows the security guard and a female member of staff attempting to restrain the woman as she tries to force her way out of the store, shouting: ‘Don’t f****** touch me.’

The boy in the buggy screams as his mother grapples with staff, who push her away from the exit.

Shoppers look on nervously as the woman struggles and blasts: ‘Get the f*** off me, my son’s in there.’

She manages to break free and tries to leave but the guard blocks her path and says: ‘You ain’t going nowhere.’ 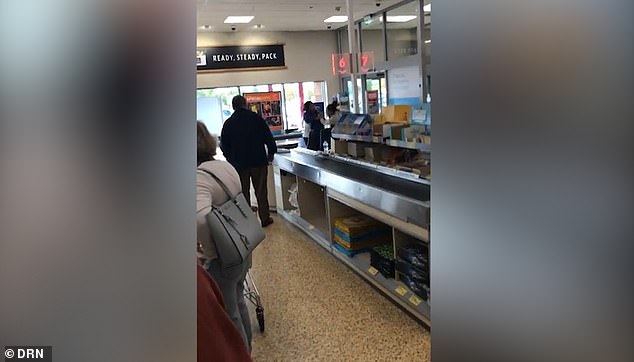 The furious shopper then appears to pick up an object from a nearby shelf and marches towards the guard, yelling: ‘Don’t f*** with me in front of my kid.’

She barges into him with the buggy and warns: ‘Move, I’ll hit you with it.’

He grabs the recently-acquired object from her hand and tries to restrain her again but she resists forcefully, kicking out at him.

As they struggle the female employee pushes the child away to a safe distance but the mother runs after her and says: ‘If you touch him again, I’ll f*** you up.’ 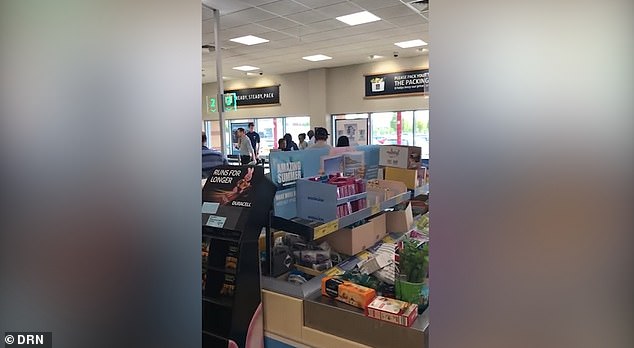 Taking the buggy back, she heads towards the exit as a shopper tells her: ‘You’re gonna get done for assault anyway.’ To which she replies: ‘I don’t give a f***.’

Bystanders gasp as she then grabs a bottle from a nearby table and launches it at the man’s chest.

As the child becomes more hysterical, the guard eventually backs down and allows her to leave.

But she attacks him again on the way out and the guard appears to catch her in the face as he tries to defend himself.

She then spits in his face and continues to hurl missiles at him from outside.

Social media users were disgusted by the woman’s behaviour. One wrote: ‘Oh my God, poor child.’

White Home lawyer 'cooperating with Robert Mueller's obstruction of justice investigation of Trump'
Controlling bully', 39, who murdered his wife 'like a lion kills its prey'
The Obamas DON'T have a 10-foot wall as Trump claims in pitch for Mexico border barrier
Hero daughter saves her mother's life after attack by knife-wielding ex-partner
Fury as six disabled passengers are left stranded on a Jet2 plane for almost TWO HOURS
Women to be offered 'sober chaperones' at Christmas party after sexual harassment scandals
Donald Trump kicks off NATO meetings in London by unloading on Emanuel Macron
Black man arraigned for stabbing five people at Hanukkah party with machete