Callum Wilson is determined to make his mark for England after fighting back from two serious knee injuries to become one of the country’s hottest attacking talents.

The 26-year-old is the latest player to be rewarded by for impressing on the path less travelled, having spent time on loan at non-league Kettering and Tamworth before making his mark at hometown club Coventry.

Wilson moved onto Bournemouth in 2014 and helped fire them from the into the , where Eddie Howe’s men currently find themselves riding high in sixth. 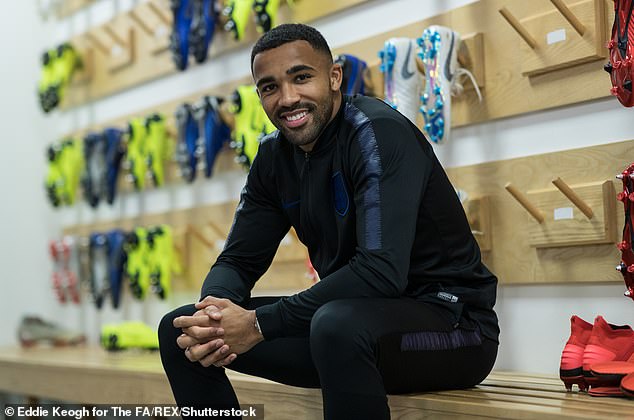 No English player has bettered the striker’s league tally of six goals and last week he became the newest addition to the Three Lions set-up – a move largely overshadowed by the one-off comeback of all-time top scorer Wayne Rooney.

‘It’s nice, it’s an honour, sharing a dressing room with people like Wayne Rooney and Harry Kane,’ Wilson said of his esteemed company.

‘It’s nice and obviously it is something that from when you are younger you always want to do. To finally get here is a great achievement.

‘When I walked in, I felt like I should be here.

‘I felt like my performances this season have justified my selection at the moment.

‘I play against them week in, week out, different players in the squad, so you get to see them in various opposition teams, but you’ve still got that mutual respect there.

Wilson is ready to take his club form onto the international level and continue his remarkable comeback story.

Not only did he rupture the anterior cruciate ligament in his right knee in September 2015, but 16 months later he suffered a rupture in his left.

‘It is like anything in life – if it is worth fighting for, you are going to have to go through some tough times to get there,’ Wilson said, stoically. ‘It’s the same for me, really.

‘Yeah, I’ve had a few setbacks, but it just makes you stronger and makes you appreciate things more.

‘When you get here now, you appreciate it a lot because of what you’ve done in the past.’

Wilson spoke in great detail about the rehabilitation process, along with the lessons learned from rushing back from the first ACL injury.

The Bournemouth striker also shed light on the commitment it took to get to the brink of representing his country.

‘I actually missed the birth of my second child being out (of the country) doing rehab, so that’s the sort of sacrifices I made to get to this point,’ Wilson said.

The striker expressed immense gratitude to those that aided his recovery through his time out, while his spells in non-league undoubtedly fuelled this rise.

‘First and foremost, you turn up to a team like that, you turn up for training and you’ve got people coming in their work overalls, in their work vans just coming off a painting job that they’ve just finished and things like that, so it’s a bit surreal,’ Wilson said, having been at Tamworth as recently as 2012.

‘It put football, for me, into perspective and showed that I didn’t really want to be at that level throughout my career. I wanted to make something more for myself.

‘That’s no disrespect to players that are in that league, but I wanted more, and it just gave me the hunger and desire to do what I needed to do at that time, on loan, impress my club manager and then eventually go back to my home club and play.’

Nowadays Wilson is a bona fide Premier League performer that Southgate will give the opportunity to act as long-term competition for captain Kane.

‘(Southgate) just said ‘be relaxed, be yourself – don’t try and be anything different’,’ he said.

‘What I’ve done up to this point has got me here so ‘just be Callum Wilson’.’

And such is the new boy’s self-belief that he is ready to wait for his international bow to allow Rooney to get his deserved send-off.

‘It will be his last call-up, it is my first time in the squad, so hopefully I am not just here for the one time,’ reported Chelsea target Wilson said.

‘I am looking to be here for many years so this opportunity for him is more important.’