Authorities have reported six additional deaths in a Northern , raising the death toll to 29 and making it the deadliest wildfire on record in California history.

Butte County Sheriff Cory Honea said the human remains recovered on Sunday included five bodies found at homes and one in a vehicle in Paradise.

He also announced that 228 people remain unaccounted for since the fire began Thursday and incinerated the foothill town.

The statewide total of deaths from wildfires reached 31.

Strong Santa Ana winds returned to Southern California on Sunday, causing flare-ups of a huge wildfire that has scorched a string of communities west of Los Angeles, but no additional structures were believed to have been lost, authorities said. 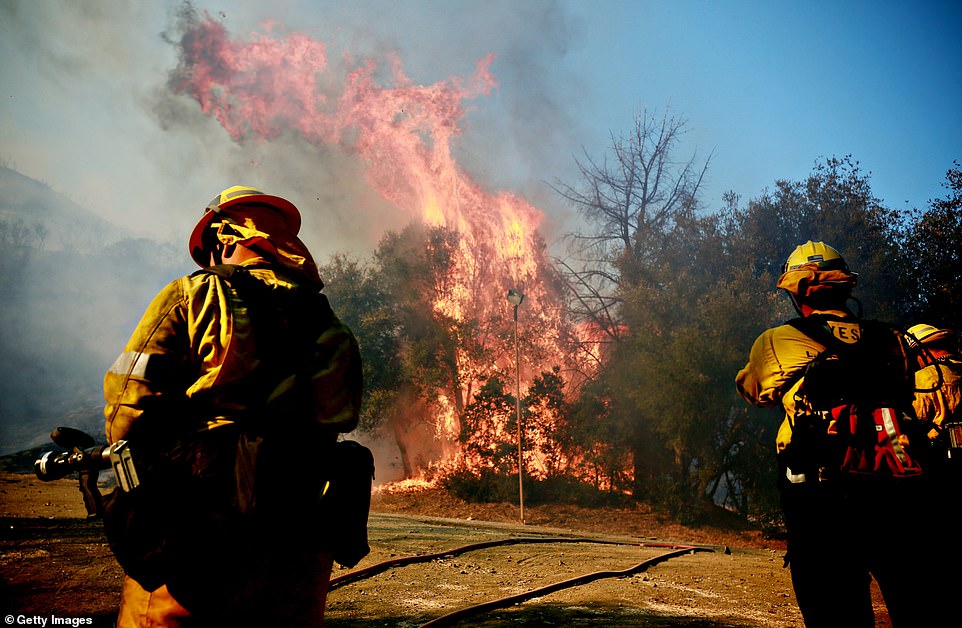 Authorities have reported six additional deaths in a Northern California , raising the death toll to 29 and making it the deadliest wildfire on record in California history 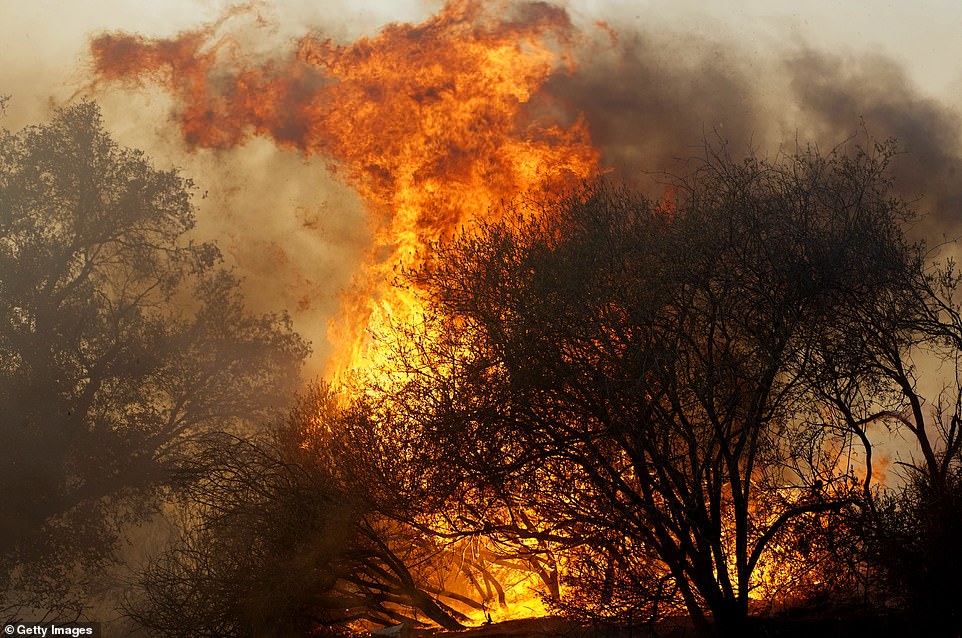 Butte County Sheriff Cory Honea said the human remains recovered on Sunday included five bodies found at homes and one in a vehicle in Paradise. He also announced that 228 people remain unaccounted for since the fire began Thursday and incinerated the foothill town

Officials said the wildfires may intensify due to the strong winds as more than 8,000 firefighters continue to battle the deadly infernos.

Those conditions are similar to when the fire started Thursday and quickly destroyed the town of Paradise.

Huge plumes of smoke rose in the fire area, which stretches miles from the northwest corner of Los Angeles’ San Fernando Valley to the Malibu coast.

Airplanes and helicopters swooped low over hills and canyons to drop loads of fire retardant and water.

A one-day lull in the dry, northeasterly winds ended at midmorning and authorities warned that the gusts would continue through Tuesday.

The lull allowed firefighters to gain 10 per cent control of the so-called Woolsey fire, which has burned more than 130 square miles in western Los Angeles County and southeastern Ventura County since Thursday.

Osby stressed there were numerous hotspots and plenty of fuel that had not yet burned, but at sunset he said there had been huge successes despite ‘a very challenging day’.

The count of destroyed homes remained at 177 but it was expected to increase when an update is reported Monday.

Osby noted that a November 1993 wildfire in Malibu destroyed more than 270 homes and said he would not be surprised if the total from the current fire would be higher.

The fire’s cause remains under investigation but Southern California Edison reported to the California Public Utilities Commission that there was an outage on an electrical circuit near where it started as Santa Ana winds blew through the region.

SoCal Edison said the report was submitted out of an abundance of caution although there was no indication from fire officials that its equipment may have been involved.

The report said the fire was reported around 2.24pm on Thursday, two minutes after the outage.

Venture County Fire Chief Mark Lorenzen hadn’t heard about the Edison report. ‘It wouldn’t surprise me’ if it turns out that winds caused equipment failure that sparked a fire, he said.

Mandatory evacuation orders remain in effect in the areas of the fire in Los Angeles County while neighboring Ventura County expects to lift some evacuations Sunday night.

The Santa Ana winds fueled the fires and pushed them toward Malibu, right in the paths of dozens of stars’ mansions.

April Love Geary, Robin Thicke’s girlfriend, revealed on Sunday that their $2.4million mansion had burned to the ground.

The 41-year-old singer said on Instagram that he, his girlfriend and his two kids are safe.

Most of the bodies have been discovered in the town of Paradise, making Camp Fire the third deadliest fire in California history as well as the most destructive fire the state has ever seen.

The Camp Fire has already burned through 109,000 acres and destroyed 6,713 buildings – most of them homes. As of Sunday morning, it was 25 per cent contained.

Authorities have four coroner search and recovery teams combing through the remains of Paradise, which was almost completely destroyed when a fire raged through the town on Thursday and Friday.

The Department of Justice mobile DNA lab has been dispatched to the area to help identify remains by comparing them to genetic samples from family members. The California State Chico anthropology team has also been called in to assist.

‘In some cases, the only remains we are able to recover are bones or bone fragments,’ said Butte County Sheriff Kory L Honea.

‘This weighs heavy on all of us,’ Honea said. ‘Myself and especially those staff members who are out there doing what is important work but certainly difficult work.’

Police said two bodies were found ‘severely burned inside of a stopped vehicle’ on a long driveway in a sparsely populated stretch of Mulholland Highway in Malibu on Saturday, after the Woolsey Fire tore through the area.

The Santa Ana winds that have been fueling this week’s blaze calmed on Saturday, allowing 200,000 people to return to their Los Angeles homes.

But Ventura County Fire Chief Mark Lorenzen said the lull was only temporary and told firefighters and residents to ‘stay vigilant’.

Gusts on Sunday could reach as high as 30 to 50 mph and are expected to linger through Monday morning, according to CNN.

Why Twitter users are feeling nostalgic for TV commercial breaks
Julian Assange's lawyer says Ecuador lied about the Wikileaks founder
PET scan could identify people with PTSD who are at risk of suicide
Driver suffers shattered shinbone after tornado throws him 'like a rag doll' during Kansas storm
Florida police arrest thief who broke into a Wendy's and grilled himself a burger
'More fake news bulls**t!' Furious denials erupt following report Don Jr. and Jared are feuding
Fears for food supply chain as Tyson meat packing plant in Iowa is closed due to coronavirus cluster
NYC could stay partially closed until August, phased reopening could take up to 2 months