and wife Melania arrived home from their Paris trip tonight after he
was heavily criticized for missing a Marine Corp commemoration due to rain.

However the President did brave Parisian showers earlier today to attend another solemn ceremony honoring veterans of what was called the Great War.

His visit to the Suresnes American Cemetery and Memorial in suburban Paris ended a diplomatically difficult visit to , during which Trump endured barbed criticism from French President and other world leaders. 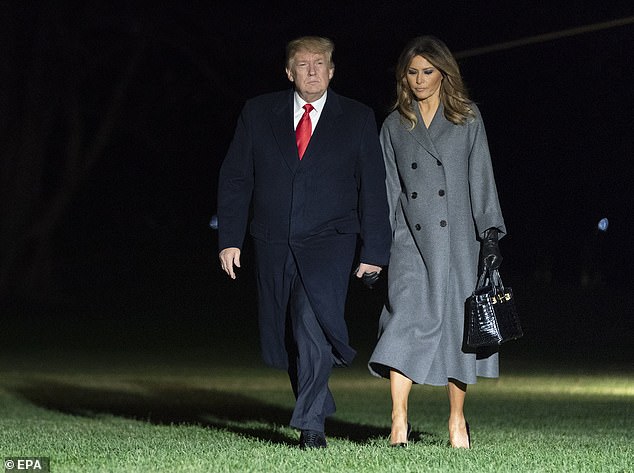 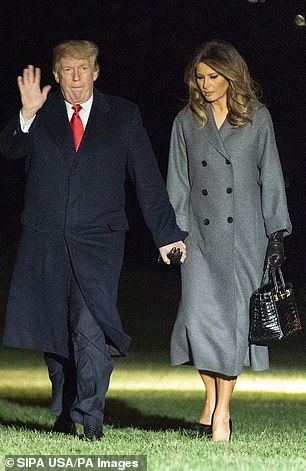 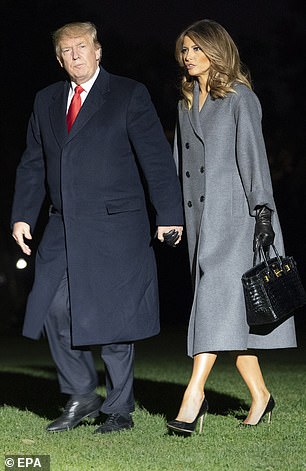 The couple appeared in good spirits as they arrived back at the White House, with Melania sporting the same stylish grey cashmere coat she had worn earlier when meeting the wives and partners of other political leaders.

‘We are gathered together at this hallowed resting place to pay tribute to the brave Americans who gave their last breath in that mighty struggle,’ Trump said at the US cemetery.

More than 1,500 Americans who died in what Trump called a ‘horrible, horrible’ war are buried there.

Before he spoke, the President stood alone amid the cemetery’s white crosses, protecting himself against the drizzle with a black umbrella.

‘It is our duty to preserve the civilization they defended and to protect the peace they so nobly gave their lives to secure one century ago,’ he said.

The veterans had been offered limited space underneath the monument, out of the rain, to watch the speech from.

‘You look so comfortable up there, under shelter, as we’re getting drenched. You’re very smart people,’ he said to laughter. ‘America is forever in debt, and we are forever in your debt. And we really appreciate you being here.’

Attendees of the president’s speech, including members of Congress in Paris for the event, huddled together under umbrellas and ponchos. 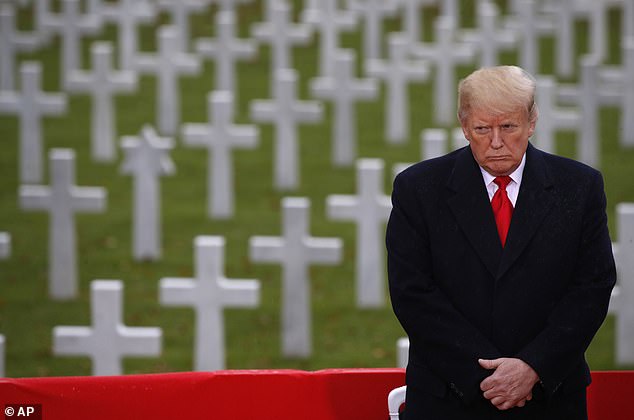 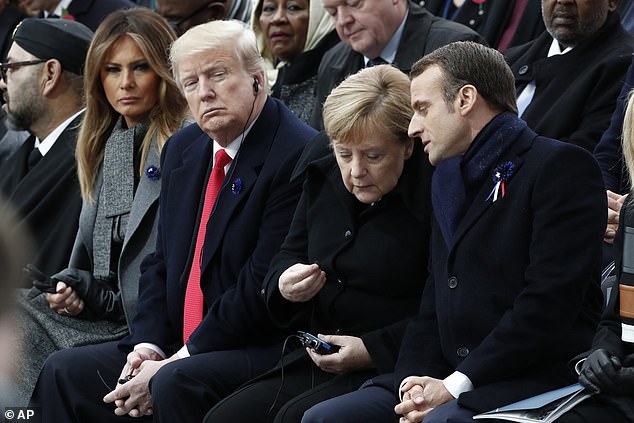 Lightening the mood, he told six veterans he said were in attendance: ‘You look like you’re in really good shape, all of you. I hope I look like that someday. You look great.’

He attended an internationally broadcast gathering for world leaders at the Arc de Triomphe and lunched with his counterparts earlier on Sunday before driving a half-hour outside of the city to Suresnes for the invite-only ceremony commemorating the end of WWI.

The speech ended an awkward chapter in his relationship with the host nation’s president that began when Trump blasted him on Twitter as he arrived at Orly airport late on Friday. 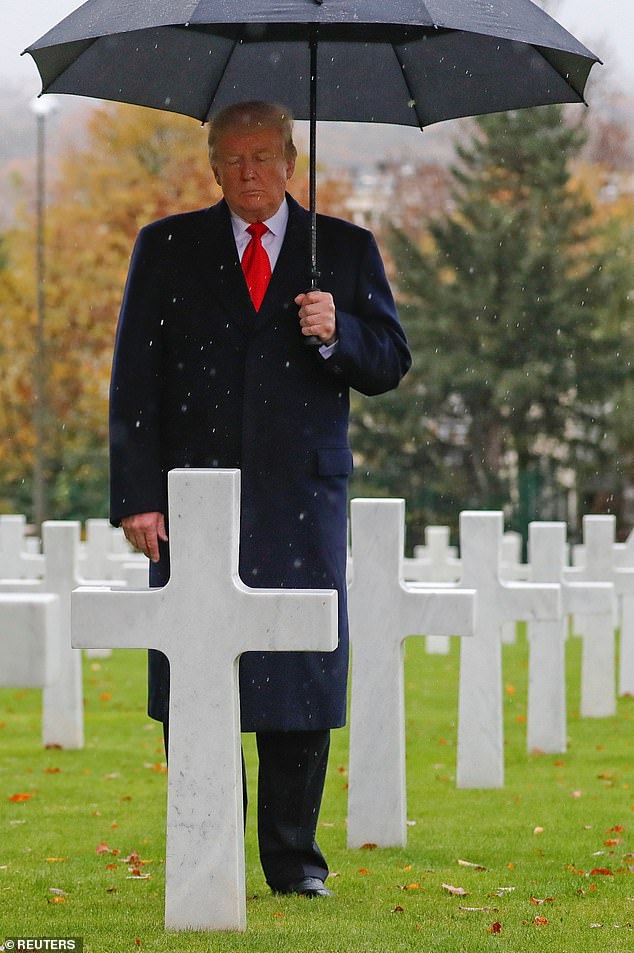 Trump’s feud with Emmanuel Macron boiled on Sunday as the French leader forcefully denounced nations ‘looking after their own interests’ and decried nationalist policies like the ones Donald Trump has embraced.

Macron specifically referred to the ‘selfishness of nations only looking after their own interests’ in remarks at an Armistice Day event in Paris that Trump and other world leaders attended.

‘Patriotism is the exact opposite of nationalism. Nationalism is a betrayal of patriotism by saying our interests first, who cares about the others, we erase what a nation holds dearest, what gives it life, what gives it grace. 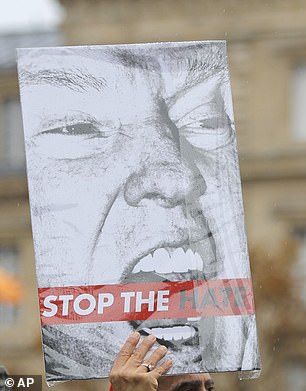 ‘And what is essential— its moral values,’ he said in an English-language translation of the speech he delivered with Trump and Russian President Vladimir Putin sitting in the front row.

For reasons apparently related to the weather Trump on Saturday canceled a visit to the Aisne-Marne American Cemetery in Belleau, about 55 miles east of Paris.

Trump drew wide criticism for skipping the ceremony at the site of one of the greatest battles ever fought by Marines.

White House officials said the weather was too poor for Trump to travel to the cemetery by helicopter.

In response to critics who said Trump could have made the trip by car, the White House issued a statement Sunday night saying Trump did not want to disrupt traffic around Paris. 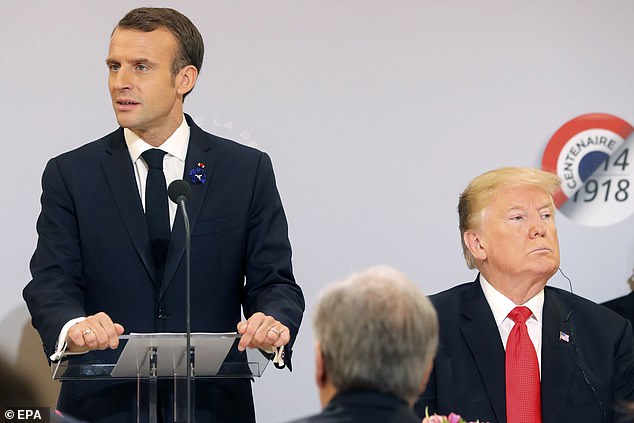 On Sunday morning a topless feminist activist from the group Femen made it close to Trump’s motorcade on the Champs-Élysées. The protester sported the words ‘fake peacemaker’ across her torso.

She was one of many protesters who criticized Trump’s attendance of an event about peace.

Despite the rain, roughly 1,500 people attended a rally against Trump at a Paris plaza several miles away, according to police. They rallied under a banner that said ‘Trump War’  and slammed policies such as US help for the Saudi-led war in Yemen.