The National Hurricane Center has noted that a new storm brewing in the Atlantic has at least a 50 percent chance of developing into a cyclone by the middle of next week.

Though late-season hurricanes are less common, they do happen, and at 1am Eastern on Sunday the forecasted a 50 percent likelihood that the weather system develops into one over the next five days.

The weather center estimated conditions would be more favorable for  the formation of a tropical or subtropical cyclone by Tuesday, when as the system moves north of Puerto Rico, Hispaniola and the southeastern Bahamas.

If the conditions do produce a hurricane, it will be named ‘Patty.’

Hurricane season in the Atlantic runs from June 1 through November 30. 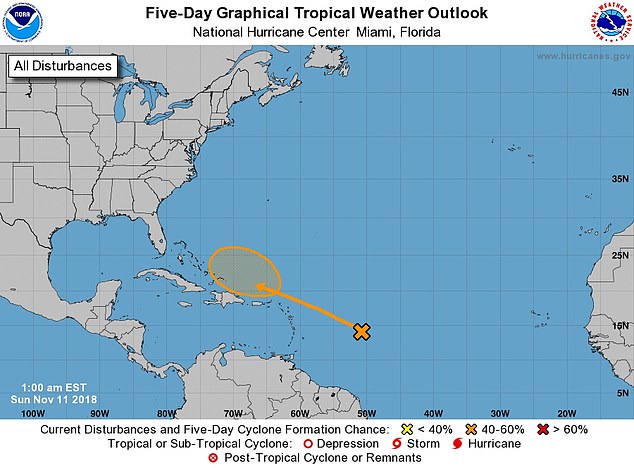 The NHC noted early on Sunday that the chance of the system becoming a cyclone within the next 48 hours was ‘near 0 percent.’

The update accompanied a map of the Atlantic Ocean featuring an orange X, noting the potentially troublesome weather systems current location, along with it’s projected path over the next five days.

The forecast for the North Atlantic, Caribbean Sea and the Gulf of Mexico read:

‘Shower activity associated with a tropical wave located several hundred miles east of the Lesser has increased in organization during the past several hours and satellite data indicate that the wave is producing strong gusty winds.

‘No significant development of this system is anticipated during the next couple of days, but conditions are forecast to become a little more conducive by Tuesday, and a tropical or subtropical cyclone could form during the middle of next week while the system moves near or north of Puerto Rico, Hispaniola and the southeastern Bahamas.’

Recent devastating hurricanes that have hit the US include Hurricane Michael, which made landfall in October in Florida, killing 18 people total Eight died in Florida, as well as six in Virginia, one in Georgia and three in North Carolina.

Hurricane Florence, which struck the US in North Carolina in September, resulted in over 50 deaths over a two-week time period, with conflicting reports putting the exact number as potentially as high as 53. 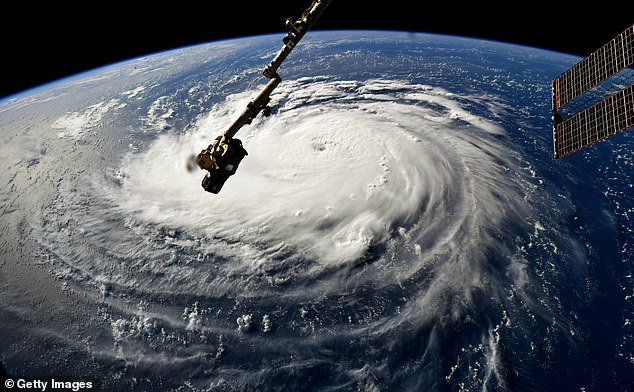 Hurricane Florence is shown gaining strength in the Atlantic Ocean as it moves west, seen from the International Space Station on September 10, in an image captured by Astronaut Ricky Arnold; Hurricane Florence, which struck the US in North Carolina in September, resulted in 53 deaths over a two-week time period. 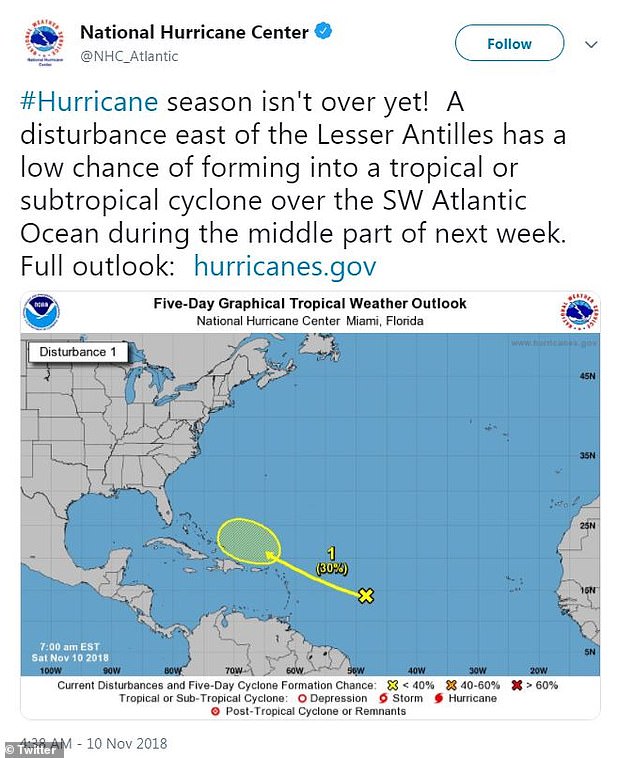 ”#Hurricane season isn’t over yet!’ The likelihood that a storm system in the Atlantic will turn into a cyclone within the next five days has risen from a ‘low’ probability of 30 percent to a ‘medium’ probability of 50 percent, within the past 18 hours

During mid-morning on Saturday, Eastern time, the Atlantic arm of the NHC tweeted:

‘#Hurricane season isn’t over yet! A disturbance east of the Lesser Antilles has a low chance of forming into a tropical or subtropical cyclone over the SW Atlantic Ocean during the middle part of next week.’

The earlier tweet showed a map with a yellow X, denoting that the probability of formation has not yet risen to 40 percent or above.

With the update early on Sunday, that probability rose to a ‘medium’ chance.

The Tropical Weather Outlook advisory was published by the NWS National Hurricane Center located in Miami, Florida, by Forecaster Avila. 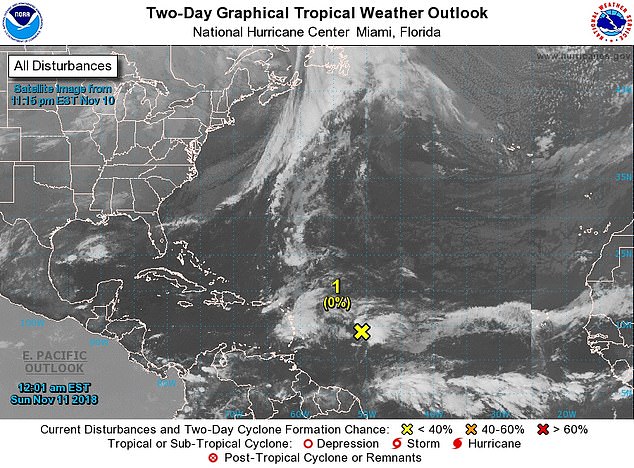 Sisters found dead on banks of the Hudson River were Saudi nationals
American lawyer who admitted drunkenly attacking flight attendant is warned she faces jail
Border Patrol catch 325 migrants who sneaked in via unsecured Mexico barrier, after group lit fire
Bill Cosby is ruthlessly mocked for wife Camille's 75th birthday post he made from behind bars
Gloria Vanderbilt's will leaves almost everything to her son Anderson Cooper
How Navy Lt. Jonny Kim, 35, went from being a Navy SEAL, to Harvard doctor to NASA astronaut
Ronan Farrow tried to stop a New York magazine profile on Soon-Yi Previn, reporter says
Colin Kaepernick calls Independence Day a 'celebration of white supremacy' and REJECTS it