Hours after  used to criticize , the French president hit back, saying he prefers not to conduct his ‘diplomacy through tweets’.

‘I always prefer having direct discussion or answering questions (than) making my diplomacy through tweets,’ Macron said in an interview with ‘s Fareed Zakaria.

Trump had used his preferred social media outlet to tweet Friday night: ‘President Macron of France has just suggested that Europe build its own military in order to protect itself from the US, China and Russia. Very insulting, but perhaps Europe should first pay its fair share of Nato, which the US subsidizes greatly!’

The French president’s comments came as Trump touched down in Paris Saturday for an event commemorating the 100th anniversary of the end of World War I. 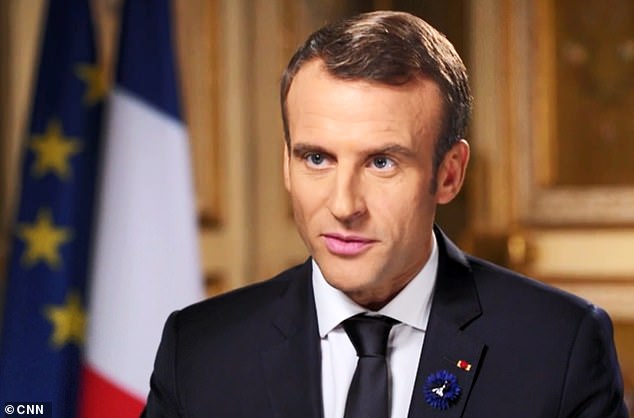 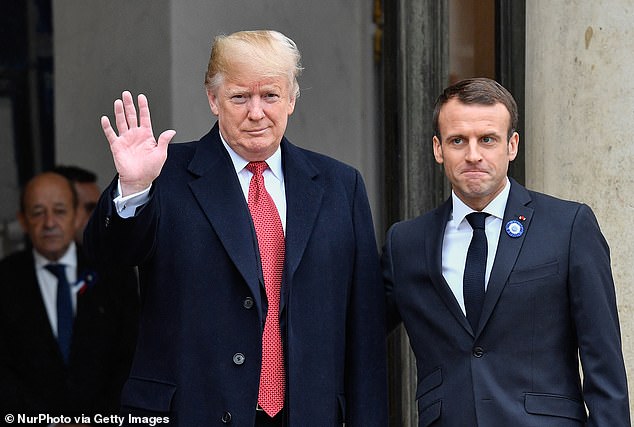 When asked by Zakaria if Trump’s tweet was a mistake, Macron said: ‘I don’t know, I’m not the one to command his tweets.’

Trump had begun the short trip to Paris by laying into Macron for his European army proposal but had calmed down by the time the two leaders met Saturday for extended talks.

The U.S. president told Macron as they began a series of meetings that he appreciates France’s willingness to pay more for its defense.

‘We have much in common in many ways — perhaps more ways than people would understand,’ he assessed. ‘We’re very much similar in our views. And I appreciate what you’re saying about burden sharing.’

Macron began the session telling Trump in French that he was ‘very delighted’ to have him in Paris again and they would be discussing the ‘strategic capability of Europe’ and its desire to take on a larger role in NATO.

‘I do share President Trump’s views that we need a much better burden sharing within NATO, and that’s why I do believe that my proposals for European defense are totally consistent with that, because it means more Europe within NATO, more capacity, in order to take our part of the burden. And I think it’s very fair and it’s very important,’ he said. 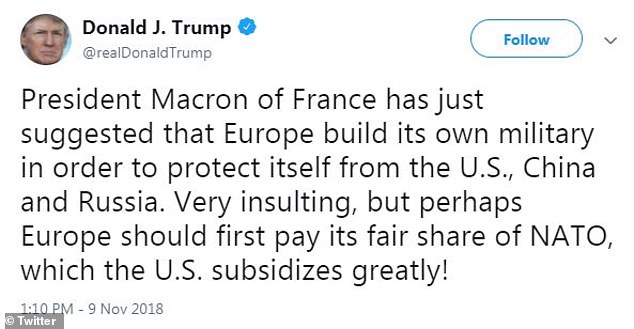 Trump tweeted ahead of his two-day visit to Paris, insulting Macron for suggesting Europe have its own army

Trump said at the meeting, ‘We want to absolutely be there. We want to help. We want to be a part of it. But different countries have to also help. That’s only fair. And I think the president — we’ve already discussed this — and the president and I very much agree on that.’

Trump and First Lady Melania were no-shows on Saturday afternoon following the row with Macron over France’s contribution to Nato.

Sunday, Macron rebuked nationalism in perhaps another dig at Trump who has been vocal about his ‘America First’ agenda.

In his speech Sunday at the Arc de Trimophe, Macron said: ‘Patriotism is the exact opposite of nationalism. Nationalism is a betrayal of patriotism. By saying our interests first, who cares about the others, we erase what a nation holds dearest, what gives it life, what makes it great and what is essential: its moral values.’

Trump watched on as the French president added: ‘I know there are old demons which are coming back to the surface. They are ready to wreak chaos and death,’ he said. ‘History sometimes threatens to take its sinister course once again.’ 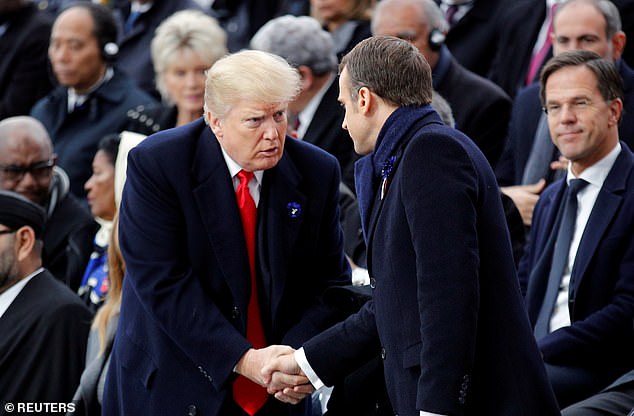