Marine animals are one of the few remaining mysteries in the natural world and stunning images have revealed the eerie mystery of some of these creatures.

Juvenile sea monsters were photographed in the dead of night off the coast of the Philippines in the Pacific Ocean.

Still in the early stages of development the larvae have yet to develop the full colouration of an adult and their first specks of colour contrast strikingly against the translucent glow emanating from the rest of animal. 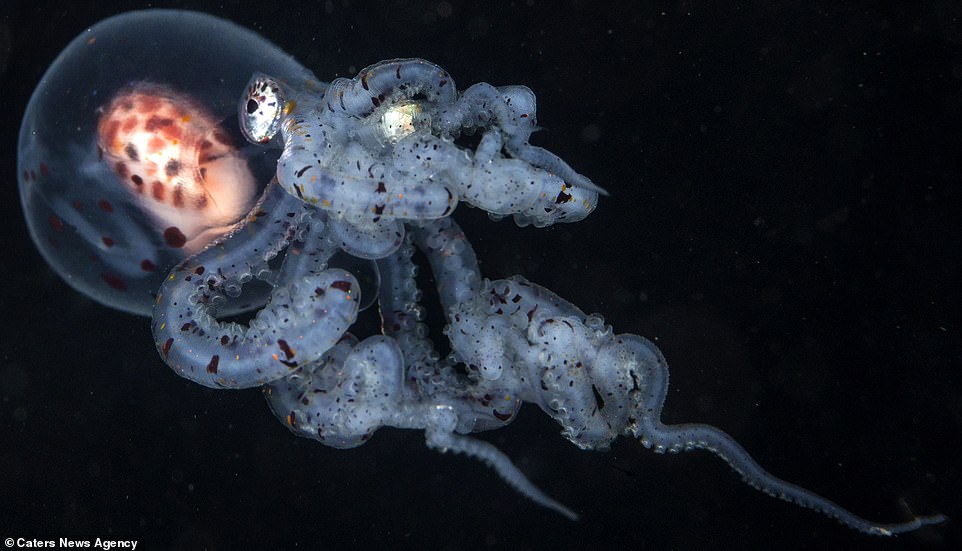 This wunderpus octopus is in its larval stage and measures only one inch (2.5 cm) in length. Octopuses are one of the most intelligent invertebrates and this animal was captured on camera at 15 feet (five metres) underwater at around 2am local time 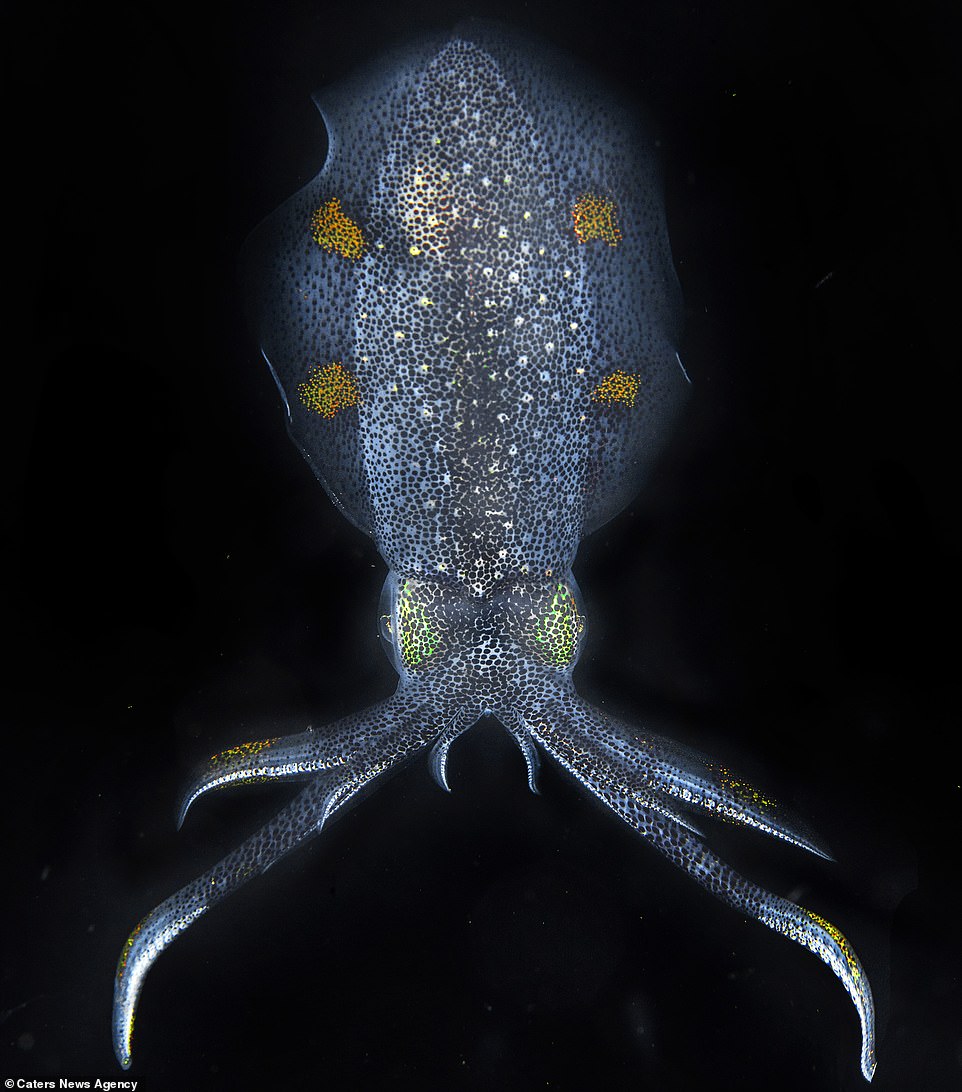 This five inch long reef fin squid looks lie it may belong in a sci-fi film but was found off the coast of Janao Bay Inn, Philippines. The images were taken using a method dubbed ‘bonfire diving’ and involves planting a torch roughly 15 feet (5 metres) away from the water’s edge on the sandy reef

Jun V Lao, an amateur photographer from Pasig in Indonesia, captured the photos with an underwater camera at night while visiting Janao Bay Inn, Philippines.

Mr Lao believes the haunting appearance of the animals makes these fish the closest thing to aliens on earth.

Mr Lao said: ‘It’s not everyday you see alien like creatures living right here beneath our oceans for real.

‘The images shared are larval stages of various fish species, roughly from 1mm in size to an inch which you can only capture during diving at the wee hours of the night 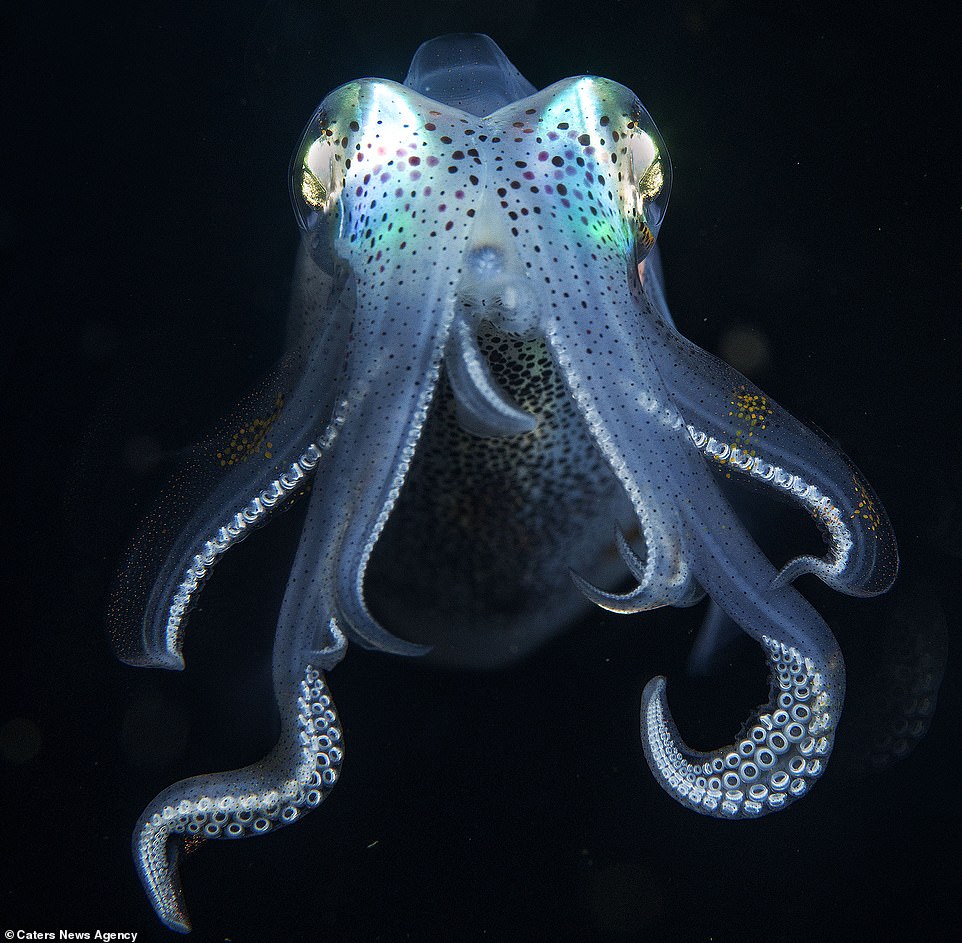 Another reef fin squid, this critter measuring only three inches long, displays the suckers on the many tentacles in a vibrant white and contrasts brilliantly with the blue hue emanating from the head of the beast 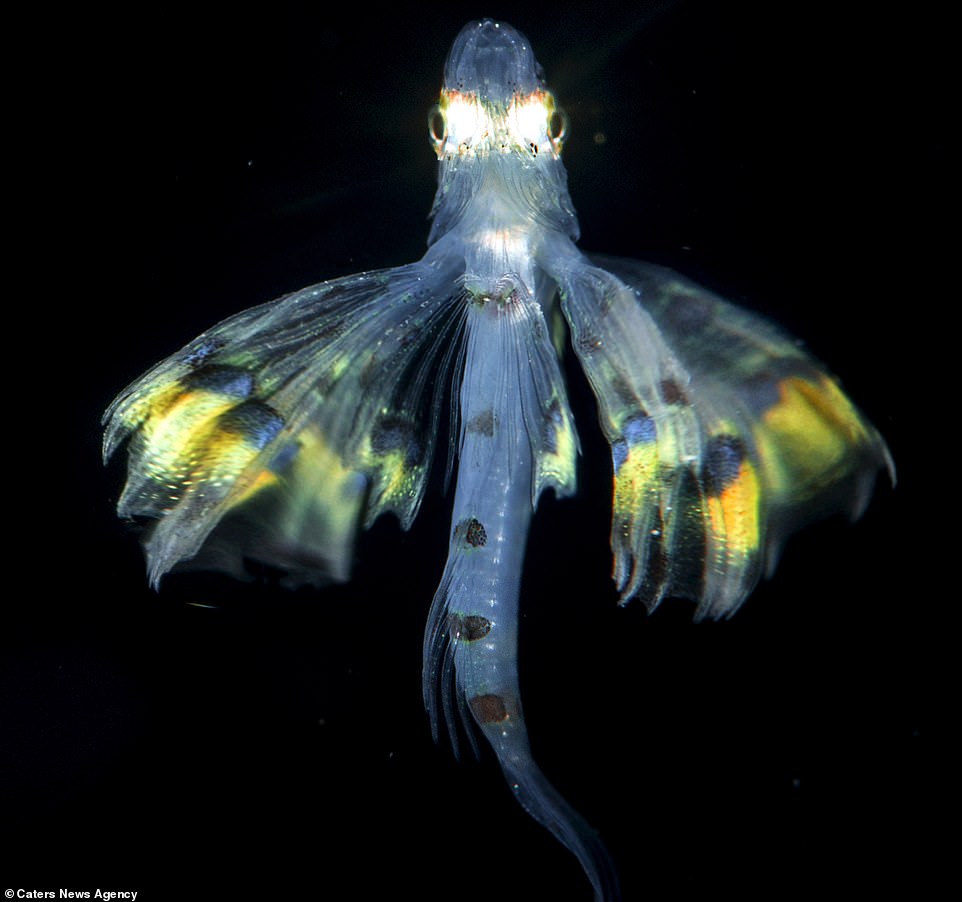 A tiny lionfish at its larval stage is snapped from above as it floats in the midnight waters of the Pacific Ocean. Adults are known for their striking colouration and long spikes that make it one of the most easily distinguishable fish in the world but this six millimetre long juvenile has yet to develop much in the way of colour 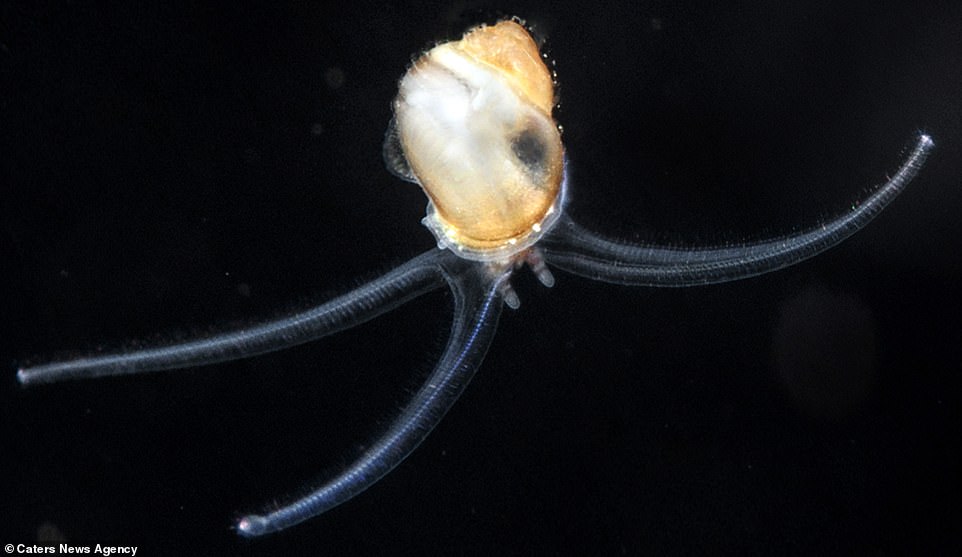 Sea Snails can reach huge sizes but this baby is a mere five millimetres long. Its developing shell can be seen glowing with a warm amber hue but the rest of its body remains largely undeveloped 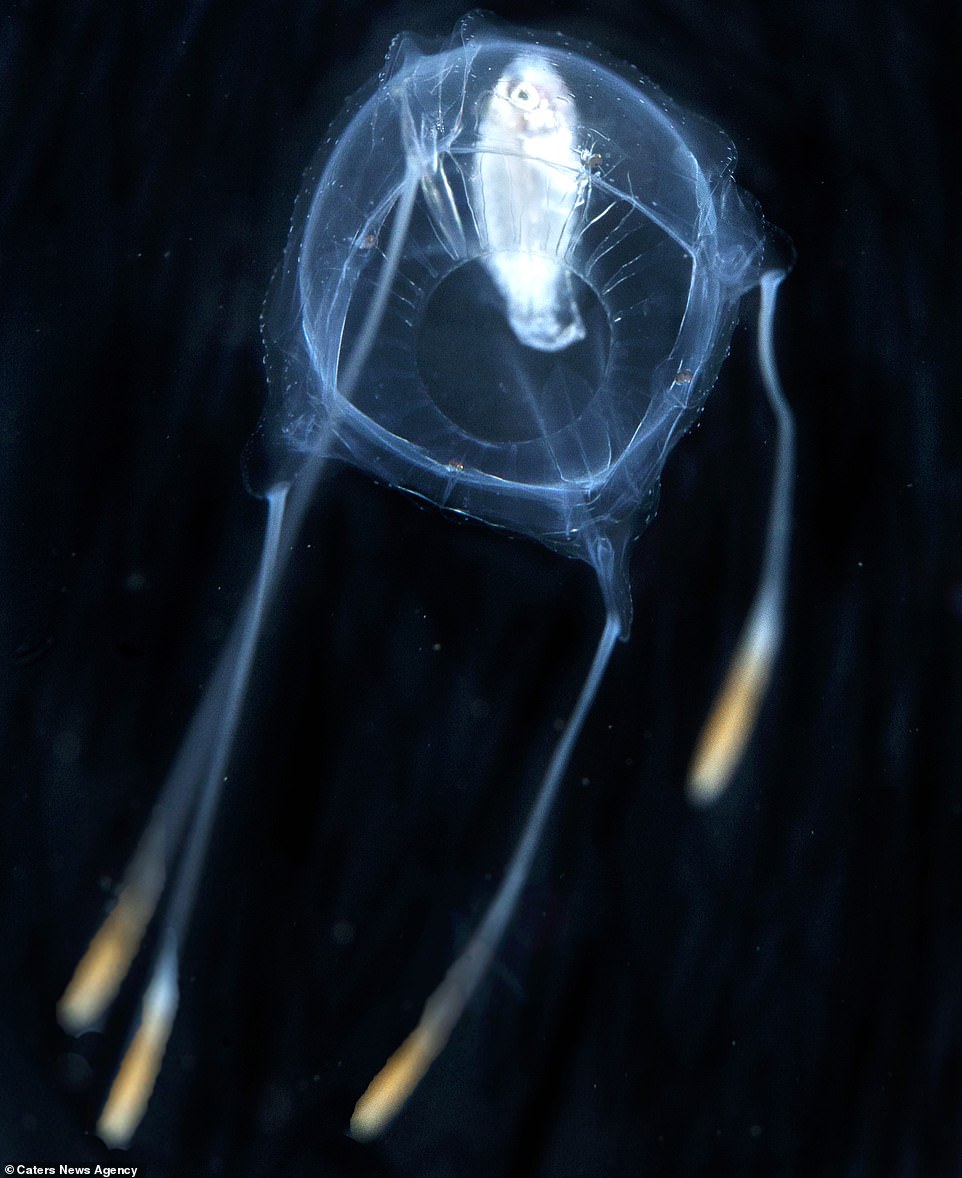 A jellyfish devouring a larval fish is captured on camera. These alien-like fish have got up closer and personal with scuba diver Jun V Lao who caught the photos on his underwater camera at night The scuba diver claims is images showcase never before seen larval marine wildlife

‘It’s the closest thing to being in outer space, with a bonus of being surrounded by real life like aliens.’

The images were taken using a method dubbed ‘bonfire diving’ and involves planting a torch roughly 15 feet (5 metres) away from the water’s edge on the sandy reef.

Animals flood to the artificial light and Mr Lao snapped the images of the fish that were drawn to the torch’s glow.

Ideally, the light should be placed at a location where the water has a weak current. 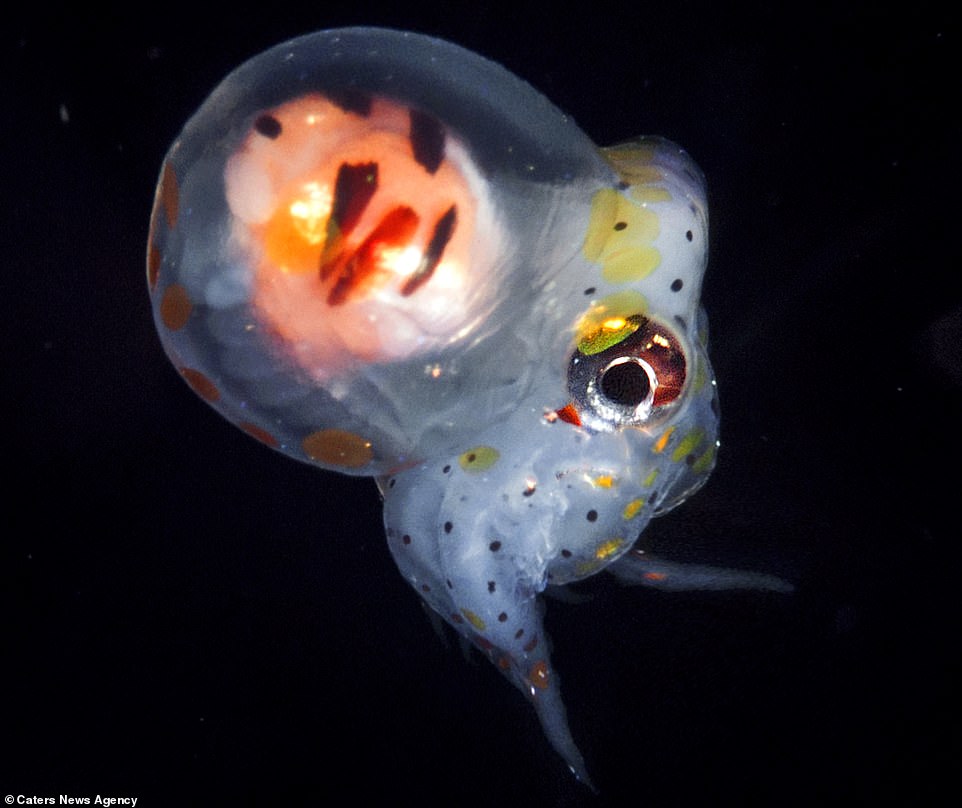 This tiny, nondescript mass is an octopus vulgaris in its larval stage and only six millimetres in size. The tentacles can barely be determined from one another and the large eye and brain are the only easily identifiable features of the fragile animal 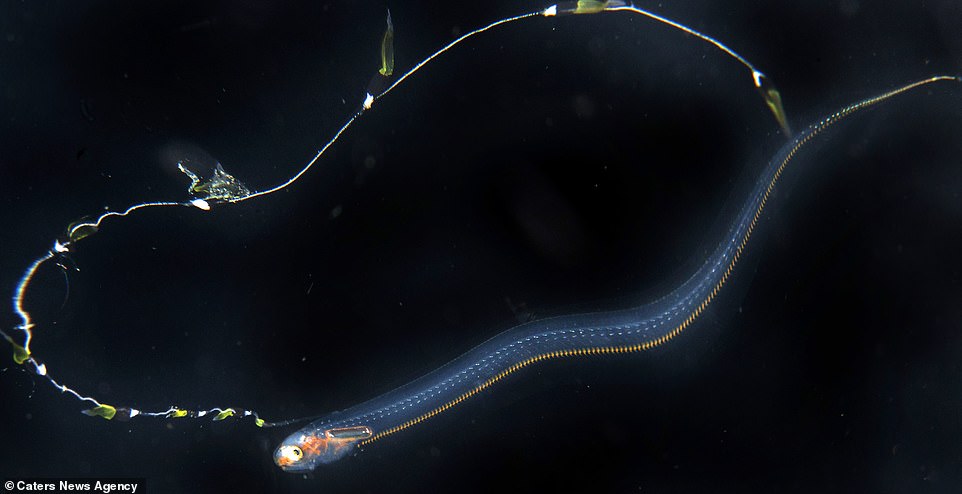 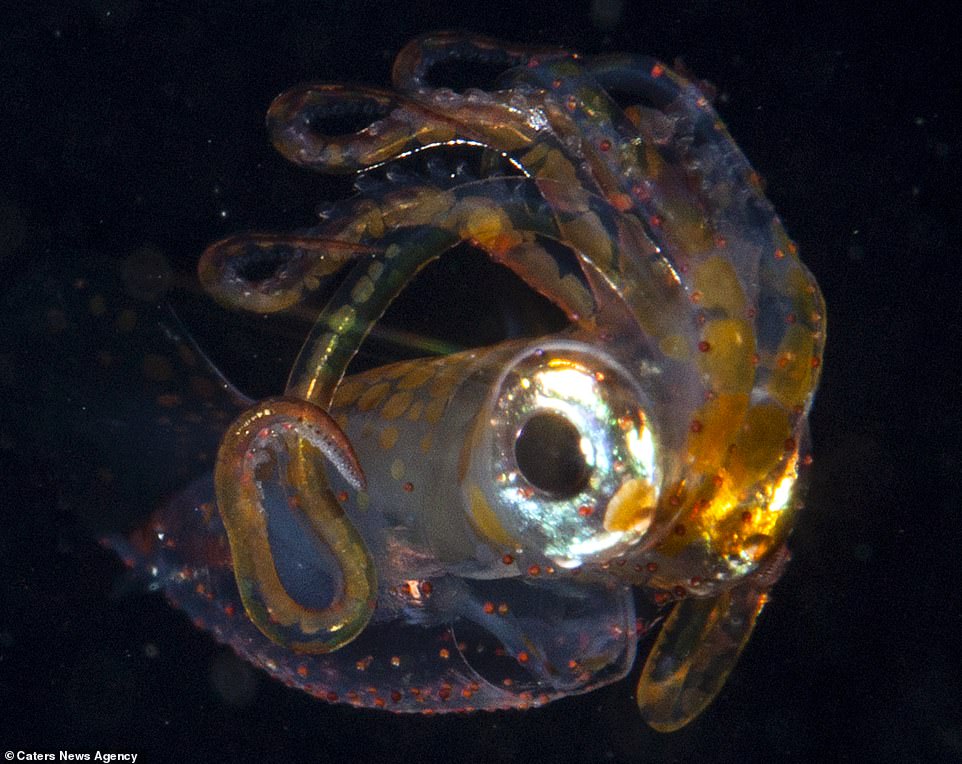 A tiny larval stage squid looks on as Mr Lao captures the image of the three millimetre long fish. The gentle oranges and red specks will form the basis for its colouration as it develops and reaches adulthood

West Ham 0-0 Chelsea: SIX THINGS YOU MISSED
Grace Millane murder probe: Detectives search for shovel
Festival-goer dies in hospital after 'wooden Obby Oss horse smacks her in face' at May Day parade
Suranne Jones' portrayal of the 'first modern lesbian' drives viewers WILD.
Thousands transform London into a rainbow of colour for city's largest ever Pride parade
Dracula's Claes Bang is firmly on the ascent
Expert shares the biggest issues parents are coming to him with during the coronavirus pandemic
The Queen's £400 million fortune: Book claims Her Majesty's personal wealth is £50 million higher