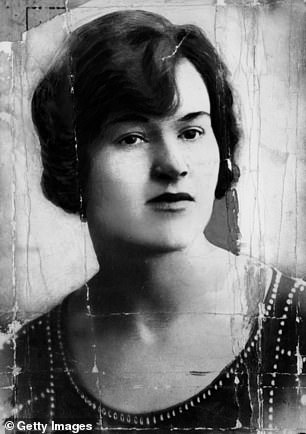 A young woman at the centre of a tragic love triangle who had the nation gripped when she was sentenced to the death penalty nearly 100 years ago is finally set to be reburied in her family plot.

The trial of Edith Thompson in 1922 garnered national attention, with hundreds of people gathering outside the Old Bailey in each day as they awaited news of her fate with baited breath.

Her young lover Freddy Bywaters had pleaded guilty to stabbing Edith’s husband Percy, 32, to death as he walked home from the theatre with his wife on October 3, 1922.

Despite Edith, 28, and her family protesting her innocence, and Freddy telling the judge he had acted alone and of his own accord, the lovers were sent to the gallows.

Almost one million people signed a petition against the death sentences, and Mrs Thompson’s mother wrote directly to the king, pleading with him to stop her daughter’s execution.

But it was to little avail and on January 9, 1923, some r three months after the murder took place, Edith and Bywaters were hanged simultaneously, at Holloway Prison and Pentonville Prison respectively.

Now, after decades of petitioning, Edith’s body is to be exhumed and buried in her family plot beside her mother. 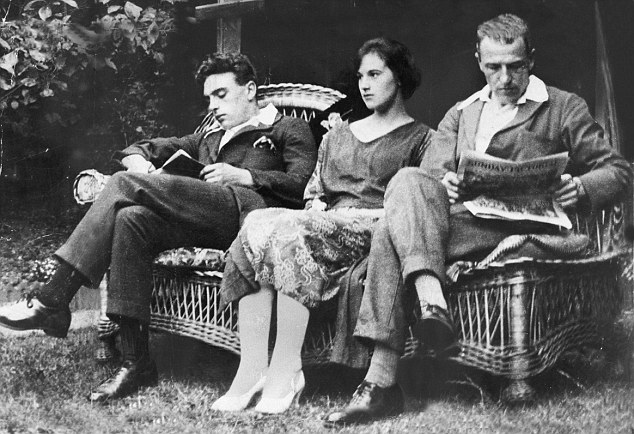 Edith Thompson with her husband Percy, right and her lover Frederick Bywaters, left 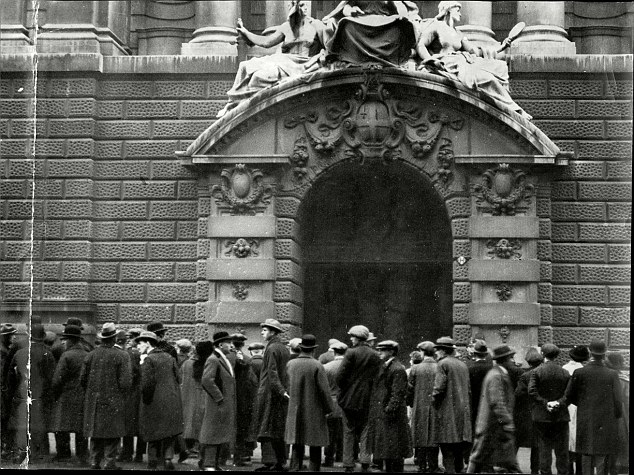 The trial of Edith Thompson in 1922 garnered national attention, with hundreds of people gathering outside the Old Bailey in London each day as they awaited news of her fate 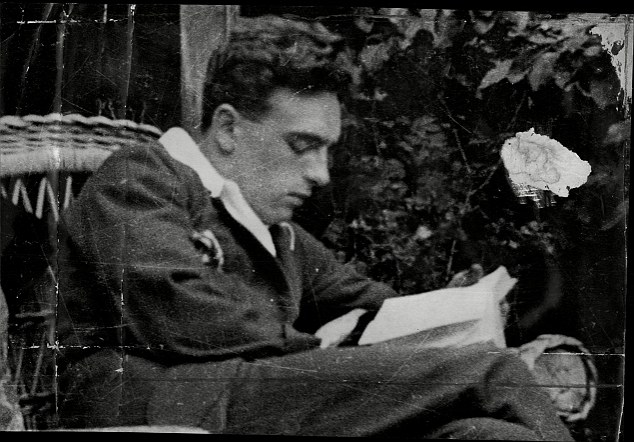 Freddy Bywaters, was a former friend and lodger of Mr Thompson – and the younger lover of his wife, Edith. He was charged with murder and subsequently sentenced to death after admitting killing Mr Thompson

On the night of October 3, 1922, shipping clerk Percy Thompson was walking home from the theatre with his wife when he was fatally stabbed by a man who had been lying in wait in the shadows of the dimly lit street.

The attacker, 20-year-old P&O steward Freddy Bywaters, was a former friend and lodger of Mr Thompson – and the younger lover of his wife, Edith.

Bywaters was arrested shortly after the attack in the  suburb of Ilford, charged with murder and subsequently sentenced to death after admitting his crime.

Edith was also arrested soon afterwards and charged with murder or alternatively with being an accessory to murder.

The 28-year-olf, who had a successful career as the manageress of a milliners in London, was named as a suspect by investigators who uncovered evidence to suggest she had encouraged Bywaters to commit the murder.

Edith’s mother’s dying wish was that her daughter be buried in the family plot in the City of London Cemetery.

Professor Rene Weis, author of Criminal Justice: The True Story of Edith Thompson (1988) is among the historians who have maintained the young woman’s innocence.

Prof Weis believes Edith’s execution was illegal, as she may have been pregnant at the time of her death – no ‘internal examination’ was marked on her autopsy, and she had suffered heavy vaginal bleeding as she died.

The academic has lobbied for the Home Office to move her body moved from Brookwood Cemetery, in Surrey where Edith’s remains were moved when Holloway Prison was rebuilt in 1971. 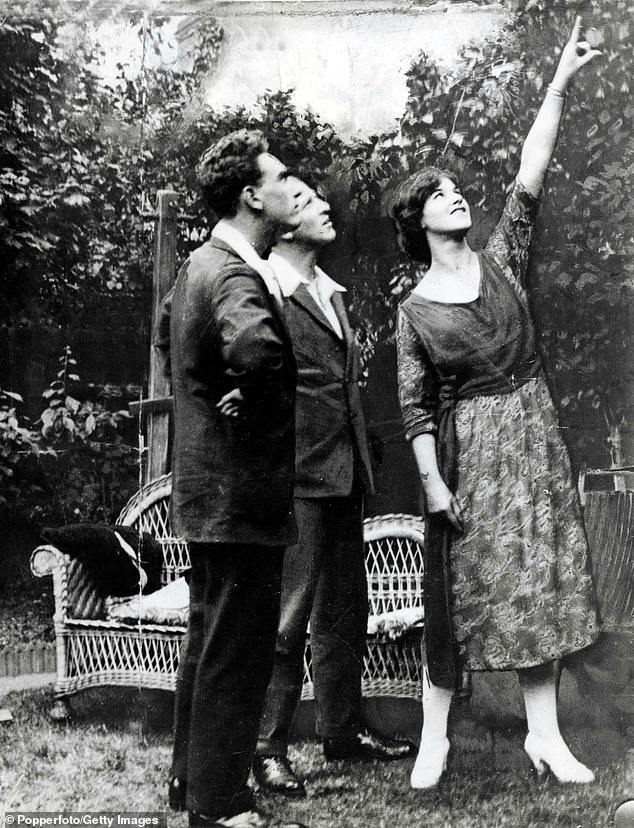 The three figures in the tragic love triangle are pictured here in the Thompson’s garden in Ilford, London in December, 1922: Frederick Bailey (left) Edith Thompson (right) and Percy Thompson (centre) 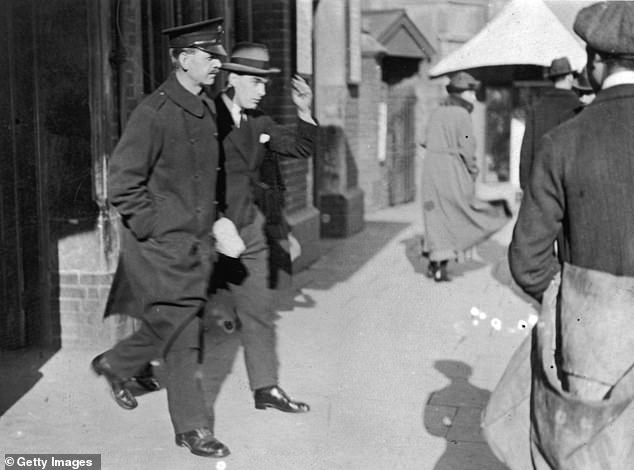 October 1922: Frederick Bywaters at Ilford police station in Essex after his arrest for the murder of Percy Thompson 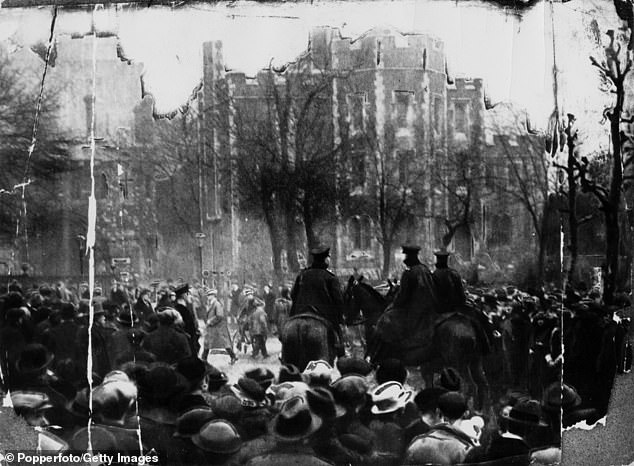 Crowds outside Holloway Prison, where Edith Thompson (1893 – 1923) was hanged

On 22 November, Edith will be reburied alongside with her mother and father at City of London Cemetery.

Prof Weis told MailOnline: ‘All her life Edith’s mother longed to have Edith’s body returned to her. She was rebuffed time and again.’

In the order of service, Prof Weis adds: ‘There have been grave doubts about Edith’s guilt ever since the trial in December 1922 and her death at Holloway on 9 January 1923.

‘If she was indeed pregnant – the Home Secretary of the time wondered about this in a letter to his mother (it came to light not that long ago) and this was in any case rumoured more broadly in December 1922– her execution would have been illegal.

‘She had had sex with her lover in Wanstead Park, Ilford, the morning of Saturday 30 September 1922 (the murder and the arrest that followed were 3-4 October).’ 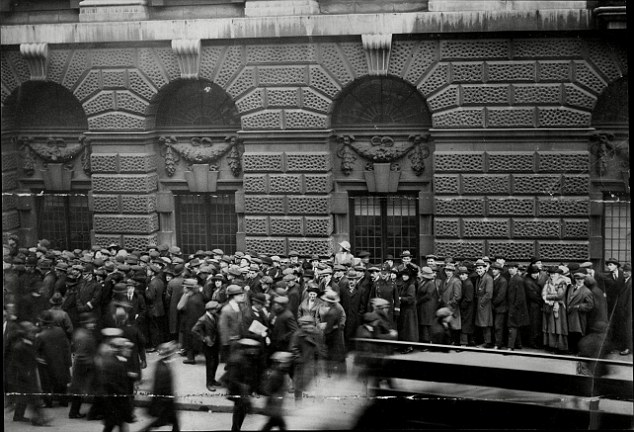 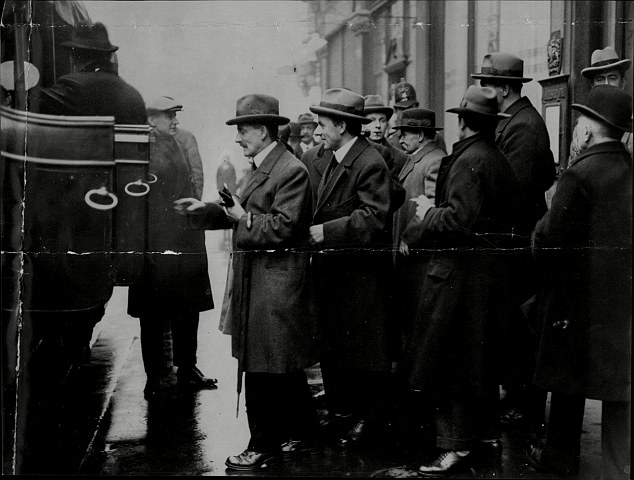 Prof Weis says Edith’s case was ‘weak from the start’ thus the Crown sought (and succeeded) to try her and Bywaters together: he for murder, she for principal in the second degree.

The main and only real body of evidence against her was a series of letters she had written to Bywaters talking of ‘poisoning’ her husband and leaving glass in his food. 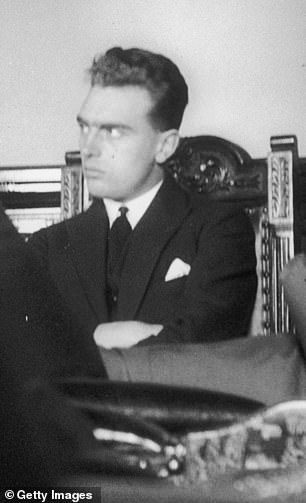 October 1922: Frederick Bywaters at the inquest on Percy Thompson

‘When her husband’s body was exhumed, two independent Home Office pathologists (one of whom was Sir Bernard Spilsbury), retained by the Crown, concluded categorically that there was no trace of poison or ground glass in Percy Thompson’s body. It was all fantasy.

‘Edith Thompson was Flaubert’s Emma Bovary by another name: hopelessly romantic, lost in books, and not always realising that life and literature / reading are two very different things.’

Prof Weis says the the trial judge was ‘deeply hostile’ to Edith.

‘One just didn’t do that kind of thing, and certainly not when coming from a lower middle class backgrounds from East Ham!

‘The more so when at the time, in 1922, there was considerable antagonism to the ‘surplus woman’, the million women gender imbalance in the wake of the carnage of the Western Front.

‘And here now was a brilliant young business woman whose husband was murdered by her lover, who was therefore also, inevitably, lost: so two men were dead: she had to pay for that. Not the whole story, of course not, but a considerable tranche of it. Edith T became the first woman to be hanged in Britain in 16 years.

‘Her letters to Bywaters brought her to her death: they run to 90,000 words and afford a brilliant insight into her literacy and the culture of the early 1920s. No one has ever written letters quite so intense.

‘Only a tiny part of her correspondence is about her estrangement from her husband, her refusing him in bed, her desire to be free.’ 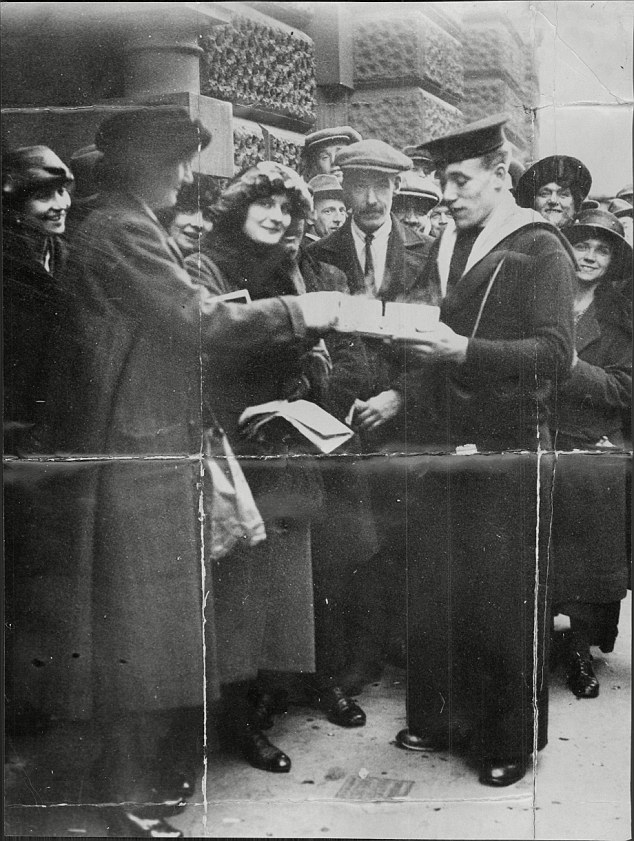 Crowds queue for the trial which garnered national attention 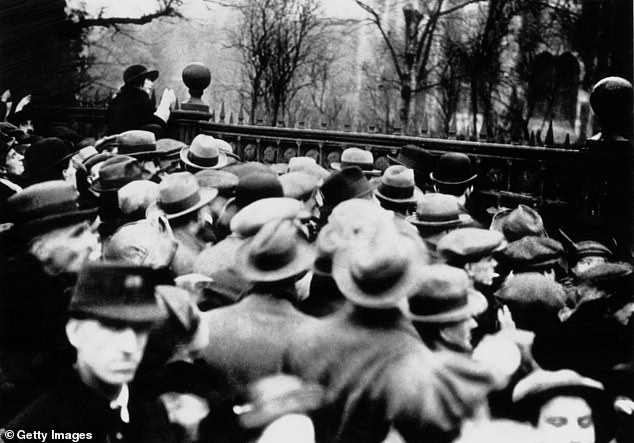 In a fascinating twist to the tragic narrative, Edith, her father (a clerk and freelance dance instructor), and her sister all taught Alfred Hitchcock to dance in 1919.

In a letter to his biographer, Hitchcock recalls how every time he and Avis Graydon met he knew that she was wondering whether he knew about her sister. They both knew but never trespassed on the past.

In 1983 Prof Weis was allowed to buy Edith’s grave, to look after it and now, after years of campaigning, her body will be laid to rest alongside her family.

Who was Edith Thompson and why was she hanged?

On the night of October 3, 1922 shipping clerk Percy Thompson was making his way back home in Ilford, Essex, after a night at the theatre with his wife in London’s West End when he was attacked by Freddy Bywaters.

Bywaters, 20, was a former lodger and the lover of his wife, 28-year-old Edith Thompson.

Bywaters, a steward on a P&O liner, was arrested shortly after the attack in Ilford, charged with murder and subsequently sentenced to death. 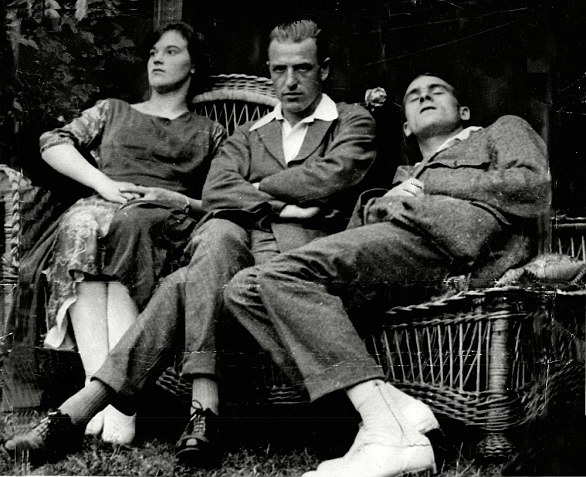 In the letters, Edith passionately declared her love for Bywaters, and her desire to be free of Percy.

She described how she had ground a glass light bulb to shards into her husband’s food. On another occasion she claimed to have fed him poison.

In one letter Edith implored Freddy to ‘do something desperate’.

Her defence counsel argued that these murderous suggestions were simply the fantasies of an over-imaginative woman.

On the stand Bywaters insisted Edith had not ordered the murders and could not have known it was going to take place because it had never been his intention to kill Mr Thompson that night.

The trial, which drew widespread media attention, ended when the jury returned guilty verdicts and both Thompson and Bywaters were sentenced to death by hanging.

Almost one million people signed a petition against the imposed death sentences. Mrs Thompson’s mother wrote directly to the king, pleading with him to stop her daughter’s execution.

On January 9, 1923, a little over three months after the murder took place, Thompson, 29, and Bywaters, 20, were hanged simultaneously, at Holloway Prison and Pentonville Prison respectively.

The last woman executed in Britain was Ruth Ellis, who was hanged at Holloway Prison on 13 July 1955.

Men charged after Qld bar fight turns ugly
DUP throws May's bid to unblock Brexit negotiations into turmoil
'Bully, 16, who attacked Syrian refugee' has fled the country with his mother
What a howler! Wolf rescued from freezing river after it was mistaken for a dog
Man who tried to prosecute Boris Johnson admits he is 'totally f***ed' if his appeal fails
Drag queens descend on London for Europe's biggest convention with stars from RuPaul's Drag Race
Fresh blow for Philip Green as his Topshop brands lose £505million after sales plunge
Seven types of sugar daddy relationships and they're not all about money