New Jersey Devils forward Brian Boyle waited over 12 seasons before netting his first hat trick, but on ‘Hockey Fights Cancer’ night in Pittsburgh on Monday – two weeks after learning he was in remission from chronic myeloid leukemia – the 33-year old finally scored three times in a single game.

The cancer survivor’s natural hat trick helped to secure a 5-1 win over the Penguins, 14 months after Boyle was diagnosed with the form of bone marrow cancer during the team’s 2017 training camp.

‘I love these nights, I really do,’ Boyle said. ‘Just the initiative and seeing the survivors on the ice and being recognized. Sometimes you feel kind of alone. It can be a dark place at times during a cancer fight. But to be seen, the support everybody shows and the money raised, it’s just a phenomenal thing.’

After being diagnosed in 2017, Boyle underwent treatment, returned to the lineup last November and won the NHL’s Masterton Trophy for best exemplifying qualities of perseverance, sportsmanship and dedication to hockey.

Originally Boyle was told by doctors that it could take up to 18 months before he would go into full remission, but it took only 13 months instead.

‘That guy, what he’s been through, it’s going to carry with him throughout his career and his life,’ said Devils defenseman Will Butcher. ‘But for a guy like me, a younger guy being a part of it, I’m going to remember it too.’ 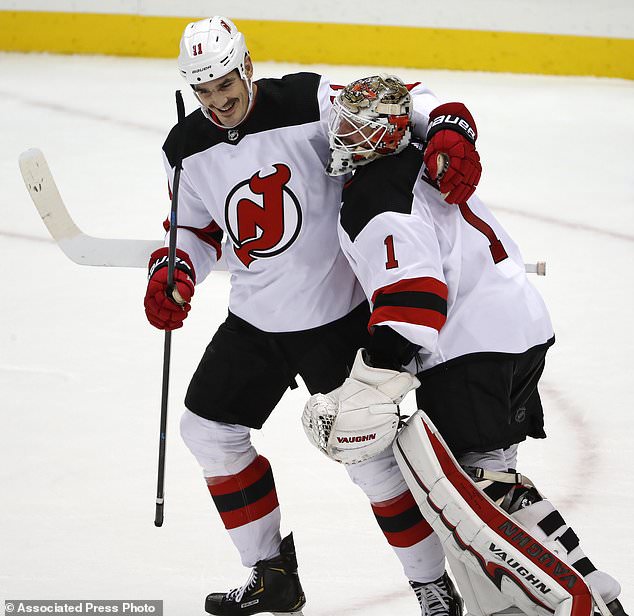 ‘There’s ups and downs, just like life,’ Boyle said. ‘The worst kind of part of it was when people felt sorry for you. They don’t know what to say, and you want them to feel comfortable around you. I think it’s important to reach out and ask questions if you need help.’

Boyle gave the Devils a 2-1 lead in the first period when he tipped a Ben Lovejoy shot behind Murray from the top of the crease.

He extended the lead with a power-play goal in the second period. His between-the-legs redirection from the top of the crease made it a 3-1 game.

Boyle scored his second power-play goal off a one-timer from Taylor Hall with 19.7 seconds to play in the second period.

‘Scoring goals is the most fun thing in hockey, as an individual player,’ Boyle said. ‘And then you can help a team win a game, especially the way we’ve been going lately, it’s a big one for us.’

Boyle’s disease was discovered last year during a routine evaluation of his blood work.

Former NHL forward Jason Blake played with the same form of leukemia during the 2007 season.

‘I feel very fortunate, very blessed,’ Boyle said in 2017. ‘We’ve had a tremendous outpouring of prayers, and if there’s anything I can ask is that that continues, because that’s something I’ve seen firsthand heal cancers and heal situations that were said to be untreatable.’

Obama endorses dozens of Democrats and can hit the highway in midterms
Student, 19, overbalances and falls to her death taking a selfie on tenth floor balcony
Chicago hospital at center of womb raiding plot is under investigation
Melania Trump arrives at the White House wearing a navy dress and flashy heels after leaving Ireland
Democrats survive fried food and politics at Iowa State Fair
54-year-old Janet Jackson superfan is surprised by the singer
Jury recommends death penalty for 'The Boy Next Door Killer' accused of murdering two women
Gene variant DOUBLES hear failure risks for black and Latinx Americans