A man and a child have died, and nine others were injured, after a horror crash involving a car and a minibus in Cheshire.

Emergency services were called to the A34 Melrose Way in Alderley Edge shortly after midnight on Sunday.

North West Ambulance Service confirmed that a man and a child died at the scene.

Another adult was taken to Manchester Royal Infirmary and a child was transported to the Royal Manchester Children’s Hospital. 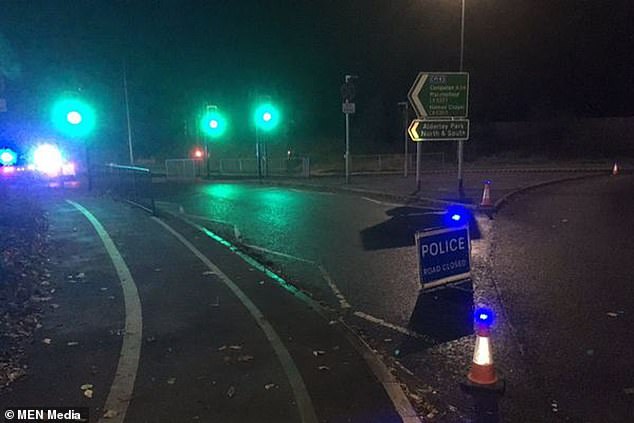 A man and a child have died, and nine others were injured, after a horror crash involving a car and a minibus in Alderley Edge, Cheshire. Pictured, the scene after the collision

Both their conditions are not known.

Cheshire Police have only confirmed that ‘a number of people’ were taken to hospital after what they described as a ‘serious’ collision.

In a statement, a police spokesman said investigating officers are appealing for witnesses to the collision.

‘At 12.04am November 4, emergency services were called to a serious collision on the A34 Melrose Way in Alderley Edge,’ the spokesman added.

‘The collision involved a car and a minibus. A number of casualties were treated at the scene and taken to hospital.

‘The road was shut between Alderley Park roundabout and the Alderley Edge roundabout while emergency services worked at the scene.’

Cheshire firefighters and paramedics also responded to the collision.

A fire and rescue service spokesman said: ‘Firefighters were called to a serious collision on Melrose Way, the A34, Alderley Edge.

‘The collision involved a minibus and a car. Crews assisted emergency services at the scene and extricated casualties.’

'Why aren't you laughing?': Studio 10 former executive producer reveals MORE of the worst guests
'Let's Go!' How General Eisenhower set in motion the greatest military attack in history
Wake up in the bed of your dreams like tennis star Johanna Konta
Thousands of teachers takes to the streets in Hong Kong as the city prepares for a weekend of chaos
British couple 'are stuck in the US' after their child was born three months early while on holiday
'If I have a choice, I would quit' says Hong Kong's leader as she apologises for unleashing 'havoc'
Navy, Army probes find no racism intent in hand gestures
Trump's coronavirus EU travel ban will hit embattled airlines 'extremely hard'