This is the shocking moment a mother appears to feed some wine to her toddler, straight from the bottle and without concern.

The shocking footage has now been viewed by more than 700,000 people online and has sparked considerable outrage.

It shows a woman in a pink dress sitting on a chair and offering a young girl a bottle of what appears to be wine. 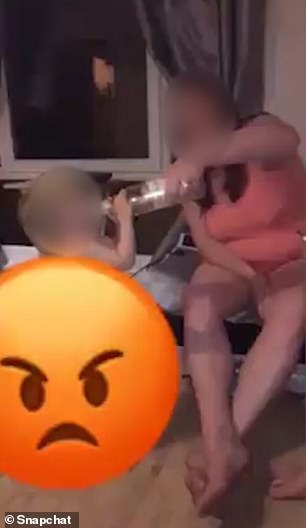 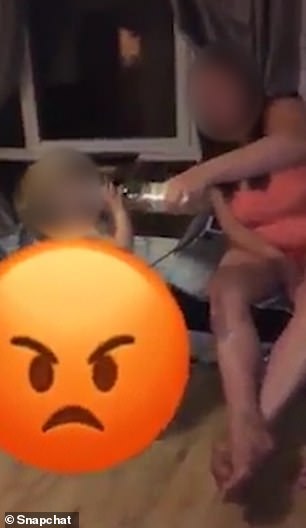 The footage, which is believed to have been taken in July, shows a woman in a pink dress appearing to feed a toddler wine from a bottle. Dozens have criticised the woman featured in the footage, which has been viewed thousands of times

The infant eagerly grabs the drink and slurps a few mouthfuls down before the smiling adult retrieves the bottle.

Horror footage showing the incident was first shared on Snapchat, but was subsequently put on Facebook and viewed thousands of times.

Dozens have commented online, sharing their views of the footage.

One said: ‘Definitely wouldn’t even give it to my 15-year-old. There’s a reason why it’s only for adults and some of them can’t handle it.’

While another said: ‘My son is two and NEVER would I give him alcohol until he’s old enough. Seems there’s a lot of disgusting parents around.’

Some even called for the police to get involved, saying: ‘Child abuse no other word for it. I hope they find her and put the kids somewhere safe, away from that vile vile woman.’ 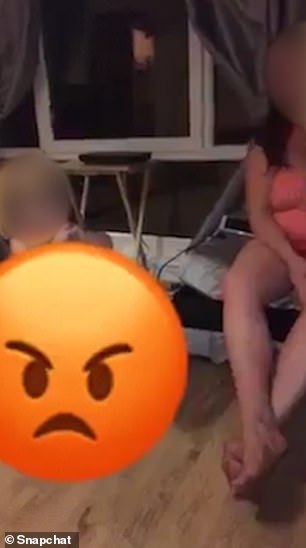 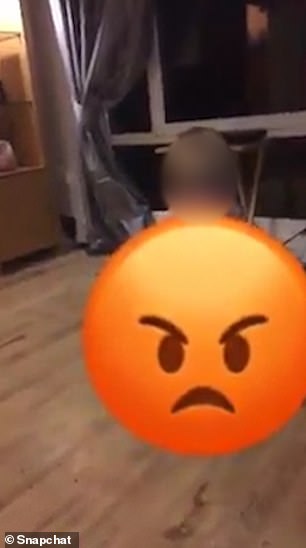 An angry face emoji was placed on top of the toddler featured in the video. Uploading the footage to Facebook, someone said: ‘I stand my ground. I’m done with the system and this planet’

The footage is believed to have been taken in July of this year at a home in Lanarkshire, Scotland.

Some were more sympathetic to the video, suggesting there might not even be any wine in the bottle at all.

One said: ‘Not that I’m saying this is acceptable but there is no evidence of that being alcohol in that bottle.

‘But even so what adult does this sort of thing for fun to a small child. A bit irresponsible really.’

While another said suggested there could be ‘just juice’ in the bottle.

The person who posted the footage, also uploaded some fairly scathing remarks.

They said: ‘I stand my ground. I’m done with the system and this planet. If you think I’m the one in the wrong you are the f****** problem!’

‘One in three TripAdvisor reviews is fake’, claims Fakespot website
Judge strikes down Kentucky law made by Republican Governor that tried to close last abortion clinic
Four dead and 43 injured in high-speed train crash in Turkish capital Ankara
Purple Heart triple-amputee vet Brian Kolfage undergoes 'invasive TSA pat down' at Tucson Airport
Trump blasts Michael Cohen hearing for intruding on Vietnam summit
R. Kelly is seen on his cell phone outside his Trump Tower digs as he faces a possible jail time
Simone Biles posts about 'happy thoughts' days after brother was charged over a triple-homicide
9 people are killed in a plane crash in South Dakota, including two children