Ireland’s new drink-driving laws will ruin social lives in rural parts of the country, according to a Sinn Fein councillor.

The legislation was brought into effect last week and automatically disqualify any motorist who is found to have consumed .

Drink-drivers will now be disqualified from driving for three months, and replaces previous legislation which provided for penalty points for some drivers instead of a disqualification.

But the new legislation has been attacked by Cllr Seadhna Logan, who told the Leitrim Observer: ‘This October Bank holiday weekend locally has highlighted the anti-rural, anti-business consequences of a zero-tolerance approach to alcohol.’ 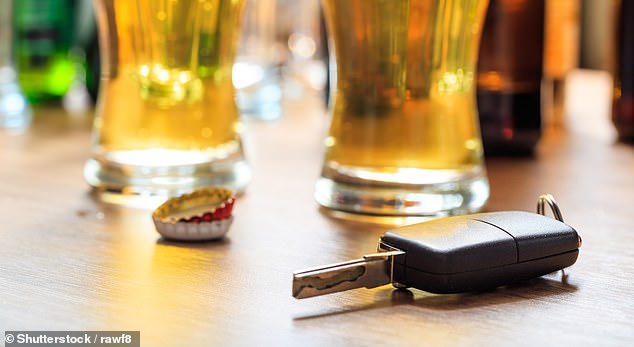 Shane Ross, the minister for transport, tourism and sport, said the measures were a ‘significant step in clamping down on the scourge of drink driving’ (stock image)

Cllr Logan added: ‘While I do not condone driving with a blood alcohol level above that which is legally permitted, I feel the enforcement of zero-tolerance will instill an unnecessary fear in already marginalised rural dwellers who are dependent on driving for independent living.’

Prior to the Road Traffic (Amendment) Act 2018 coming into force on October 25, a driver detected with a blood alcohol concentration of between 50 and 80 milligrams was punished with a €200 fine and three penalty points.

Leitrim Garda superintendent Kevin English said he welcomed the change, adding that ‘if the law saves one life it is worth it’.

Shane Ross, the minister for transport, tourism and sport, said the measures were a ‘significant step in clamping down on the scourge of drink driving’.

He added: ‘There are few more irresponsible and dangerous things people can do in everyday life than drink and drive.

‘It was always wrong to give people the mild slap on the wrist of three penalty points for such potentially lethal behaviour, and it is a great satisfaction to know that in future people who behave this way will face a disqualification from driving for three months.’