Apple shares plummeted as much as 7 percent today after Apple announced it will stop breaking out exactly how many iPhones it sells in its financial results.

The ‘jaw dropping’ decision caused frustration and fear among investors, with one analyst seeing the move as evidence that the tech giant has ‘something to hide.’

The stock’s plunge caused Apple to briefly dip below its $1 trillion valuation – a historic milestone it reached in August.

A slew of Wall Street analysts lowered their price targets for Apple’s stock on Friday morning, with Bank of America downgrading the shares because it expects ‘increased risk’ from weak iPhone sales in the coming months, among other factors.

Apple shares also dragged down the tech-heavy Nasdaq Composite, which fell more than 1.3 percent in late morning trading, bringing shares of Facebook, Amazon and Google lower with it. 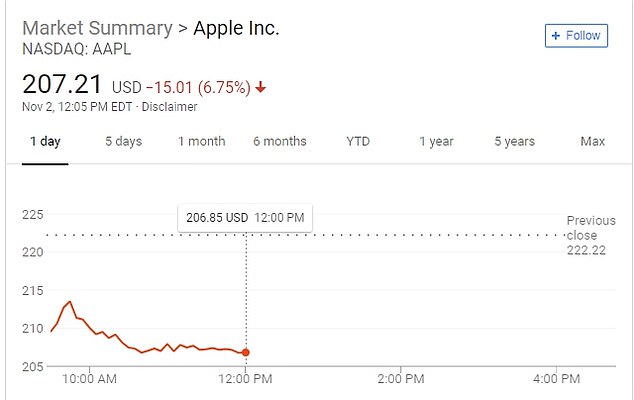 The California-based technology giant makes most of its money from iPhones and sales numbers have been seen as a bellwether of the company’s fortunes.

Analysts look to the iPhone, iPad and Mac sales figures reported each quarter as a gauge for consumer demand of those products and many view the decision to stop reporting those figures as a red flag.

‘Apple will stop disclosing unit sales figures next quarter, fueling fears the company has something to hide,’ Jefferies analyst Timothy O’Shea wrote in a report to investors.

Apple shares dropped 6.5 per cent to $207.78 (£159.91) in after-market trading on Thursday following the release of earnings figures for a record-setting September quarter.

Shares fell as much as 7 percent mid-morning on Friday, causing Apple to briefly lose its $1 trillion market cap – a valuation it achieved in August, earning it the title of ‘world’s most valuable company.’

Apple’s market capitalization represents the total number of all its shares, multiplied by its current stock price.

The higher Apple’s stock rises, the greater its valuation becomes and vice versa. 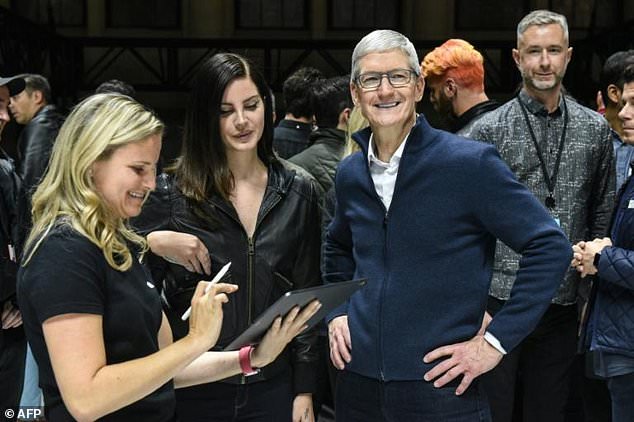 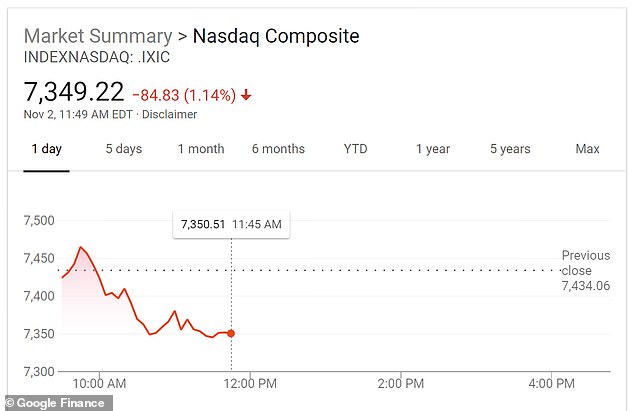 Apple shares dragged down the tech-heavy Nasdaq Composite, which fell more than 1.3 percent in afternoon trading, bringing shares of Facebook, Amazon and Google lower with it

Apple executives confirmed that from now on its earnings reports would no longer specify numbers of iPhones or other products sold.

Instead it would focus on revenue, margins and cost of sales.

‘This is a little bit like if you go to the market and you push your cart up to the cashier and [they say] ‘How many units you have in there?” Cook said.

‘It doesn’t matter a lot how many units are in there in terms of the overall value of what’s in the cart.’

The shakeup was immediately criticized by many on Wall Street.

Wedbush analyst Daniel Ives called the move a ‘jaw dropper’ that will likely end up frustrating investors who look to unit sales for greater clarity on Apple’s overall business.

‘The Street will find this a tough pill to swallow this morning as the transparency of the Cupertino story takes a major dent given that tracking iPhone units has become habitual to any investor that has closely followed the Apple story for the last decade+ and is critical to the thesis,’ Ives explained.

‘…The skeptics will point to Apple doing this right at the critical juncture where higher ASPs are making up for slower unit sales which remains the worry and the stock will get hit accordingly this morning.

Revenue in the fiscal fourth quarter climbed nearly 20 percent to $62.9 billion from the same period a year earlier, while profit soared 32 percent to $14.13 billion, helped by its growing Services business, which includes the iCloud, App Store and Apple Music, as well as other Apple gadgets like iPads and Macs.

‘We’re thrilled to report another record-breaking quarter that caps a tremendous fiscal 2018, the year in which we shipped our two billionth iOS device, celebrated the 10th anniversary of the App Store and achieved the strongest revenue and earnings in Apple’s history,’ CEO Tim Cook said. 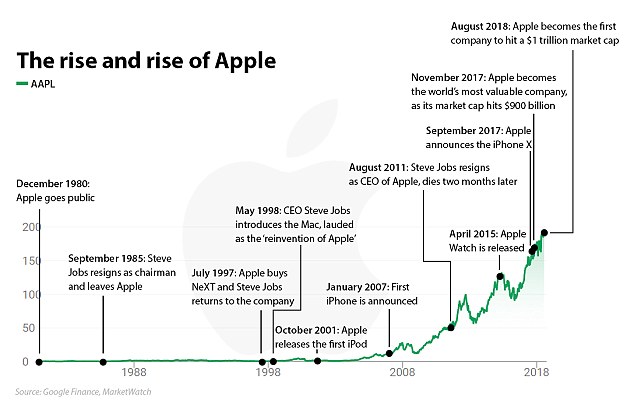 The stock’s plunge caused Apple to briefly dip below its $1 trillion valuation – a historic milestone it reached in August. Tech giants had been in a race to achieve the lofty market cap

However, the market was disappointed that Apple fell short of expectations with sales of 46.9 million iPhones and a forecast for the key holiday season that was not as robust as anticipated.

The average sale price for the latest iPhones was $793 (£793), indicating that Apple was able to deliver more of its priciest handsets, despite their rising price tag.

Apple offered no detailed breakdown of iPhone sales, but Cook said ‘the response has been powerful’ to the new 10S models that sell for $1,000 (£1,000) and up.

Revenue in the quarter ended September 29 grew double digits everywhere Apple does business around the world.

‘We set September quarter revenue records for iPhone and wearables and all-time quarterly records for Services and Mac,’ Maestri said.

Some analysts thought the estimate may have been conservative, with Apple being cautious about expectations as it works to balance supply and demand for a slew of freshly introduced products.

The latest report offers some positive news for Apple in growing its services such as streaming music and Apple Pay, allowing the company to diversify its revenue stream in a saturated smartphone market.

However, the iPhone has been the key driver of revenue and profit for Apple, and also helps bring more consumers into the company’s ecosystem for apps and services.

Apple holds around 12 percent of the global smartphone market, with most of the rest sold by makers of Android-powered handsets.

Analyst Ben Bajarin of Creative Strategies said it is possible Apple failed to anticipate consumer demand and did not have the right mix of devices in the past quarter. 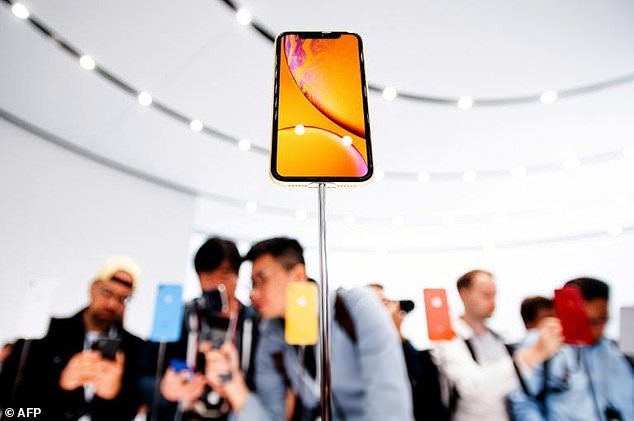 Another possibility, Bajarin said on Twitter, is that ‘Apple may be intentionally setting lower expectations for holiday.’

The strong US dollar was a ‘headwind’ to sales, particularly in markets such as Turkey, India, Brazil and Russia, according to Cook.

‘In some cases that resulted in us raising prices, and those markets are not growing the way we would like,’ Cook said.

He maintained that Apple has been talking with Indian officials about opening stores in that country and about duties on the company’s products.

‘I am a big believer in India,’ Cook said. ‘I am very bullish on the country and the people and our ability to do well there.’

Apple’s business in China was strong despite a near moratorium by officials there on approving new games for the local App Store, according to Cook.

THE TRILLION DOLLAR RISE OF APPLE

The company’s journey to the summit of the technology industry has been a rocky one, having seen Jobs (pictured right in 1976) leave the firm in the mid-1980s after his pet project, the first Macintosh computer, struggled and he attempted to oust then chief executive John Sculley. Wozniak is pictured left

1976: Founders Steve Jobs, Steve Wozniak and Ronald Wayne created the company on April 1 1976 as they set about selling computer kits to hobbyists, each of which was built by Wozniak.

The first product was the Apple I.

1977: Apple released the Apple II in June, which was the first PC made for the mass market.

1984: The Macintosh was introduced during an ad break for the Super Bowl and later officially unveiled during a launch event. It was discontinued a year later and Jobs left the firm.

1997: Apple announces it will acquire NeXT software in a $400 million deal that involves Jobs returning to Apple as interim CEO. He officially took the role in 2000.

The then Chief Executive Officer of Apple, Steve Jobs, with the iPhone

2011: Jobs resigned in 2011 due to illness, handing the CEO title to Tim Cook. Job died in October from pancreatic cancer.

2014: Apple unveiled the Apple Watch. It also unveiled its first larger iPhones – the 6 and 6 Plus.

2015: After purchasing Beats from Dr Dre, Apple launched Apple Music to compete with Spotify and other music streaming services.

2016: Apple returned to its roots and announced the 4-inch iPhone SE. Meanwhile, the firm is embroiled in a legal battle with the FBI, involving the agency demanding access to the locked phone used by Syed Farook, who died in a shootout after carrying out a deadly December attack in San Bernardino, California with his wife. The court order was dropped on March 28 after the FBI said a third party was able to unlock the device.

2017: Apple introduces the iPhone X, which removes the home button to make way for a futuristic edge-to-edge screen design and a new FaceID system that uses advanced sensors and lasers to unlock phones with just the owner’s face.

2018: In a first for the company, Apple introduces new features in its latest operating system, iOS 12, that encourage users to manage and spend less time on their devices. The move was spawned by a strongly worded letter from shareholders that urged the firm to address the growing problem of smartphone addiction among kids and teenagers.