The stars were out in force on Tuesday night to attend the Harper’s Bazaar Women of the Year Awards.

And was leading the way as she put on a dazzling display at the glamorous event held at The Ballroom of Claridges during which she was joined by stunning stars including Lily James,  and Jenna Coleman, who all opted for a series of contrasting yet equally chic looks.

It was a night of glamour and inspiration as some of the creme da la creme of the industry turned out in force to celebrate women, with the foursome leading the stunning stars at the bash.

Kylie, who recently gushed how her latest ‘lovely’ toyboy boyfriend Paul Solomons, 43, ‘doesn’t compare’ to her other romances, hit the bash with the dashing hunk.

The Australian pop songstress looked half her age in a glittering silver gown with a tulle hem that was adorned with a delicate star pattern. Oozing glamour in her plunging ensemble, Kylie teamed the outfit with a pair of gorgeous silver drop earrings.

Adding an extra dose of decadence to the look, the bombshell added height with silver heels. She styled her glossy tresses in a sleek middle-parting and showed off her beauty with smokey eyeshadow and a muted lip.

Earlier this summer the songstress declared she was so happy to have the GQ magazine boss in her life in the heartfelt interview given to The Sun. The singer told the publication: ‘It doesn’t compare. It’s lovely. He’s not on the road with me because he’s got a job and commitments, as much as I’d love him to be. 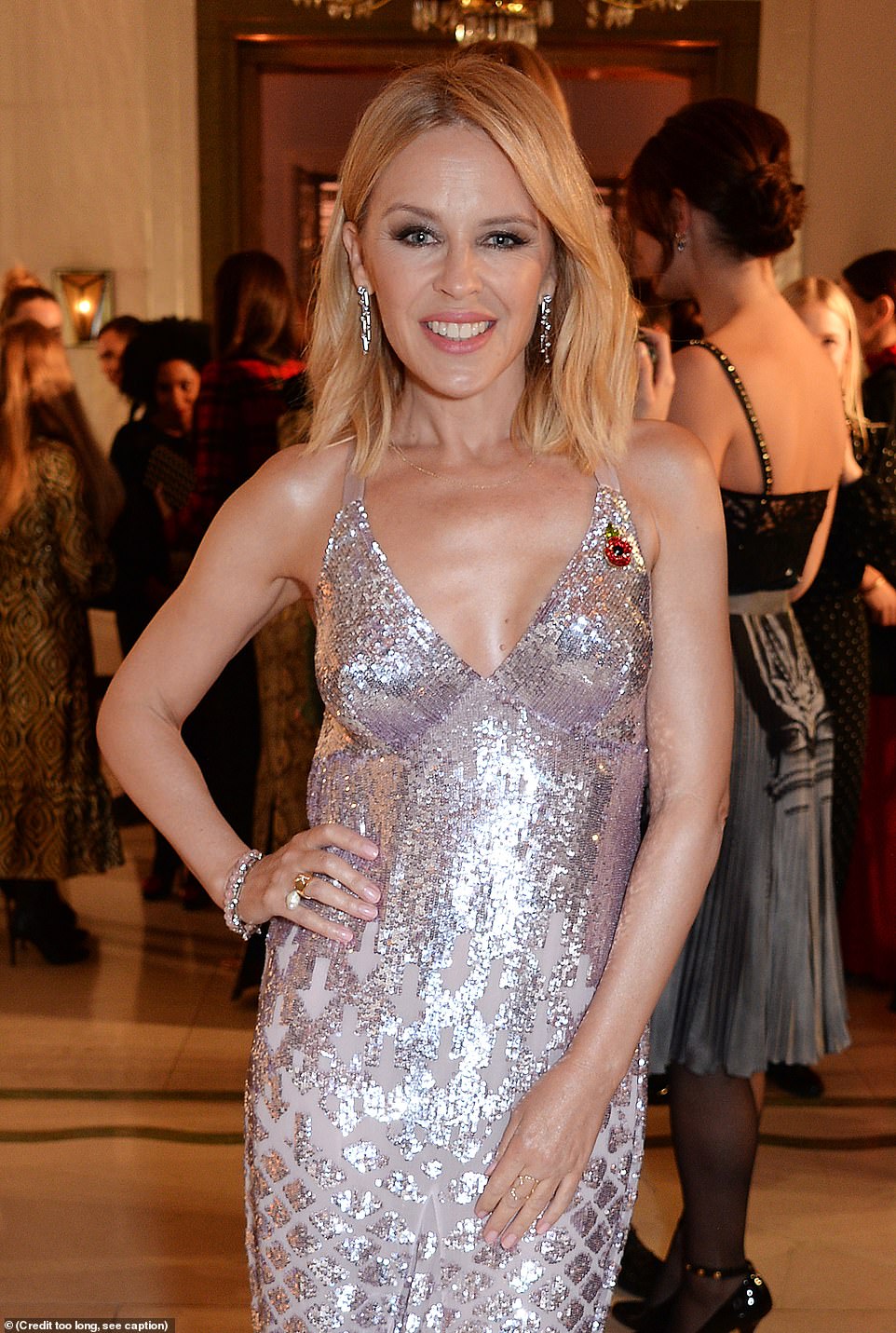 ‘I am so appreciative he is in my life right now.’ The couple are thought to have been quietly dating since May, a year after she split from fiance Joshua Sasse.

Lily, 29, commanded attention as she slipped into a trendy lace cami, embellished with white polka dots patterns throughout. Injecting more printing to her ensemble, the screen star wore a grey pleated skirt which featured an old Victorian-style portrait for an edgy touch to her appearance.

The Baby Driver actress maintained her demure look as she accessorised with sheer tights and wore patent heels on her feet. The War & Peace actress swept her tresses into a chic updo with twin bangs to reveal her stunning visage, accentuated with lashings of mascara and glossy red lipstick.

Stunner: Jenna Coleman, 32, accentuated her slender physique as she donned a eye-catching maxi dress, which featured blue lace embroidery with bedded details throughout 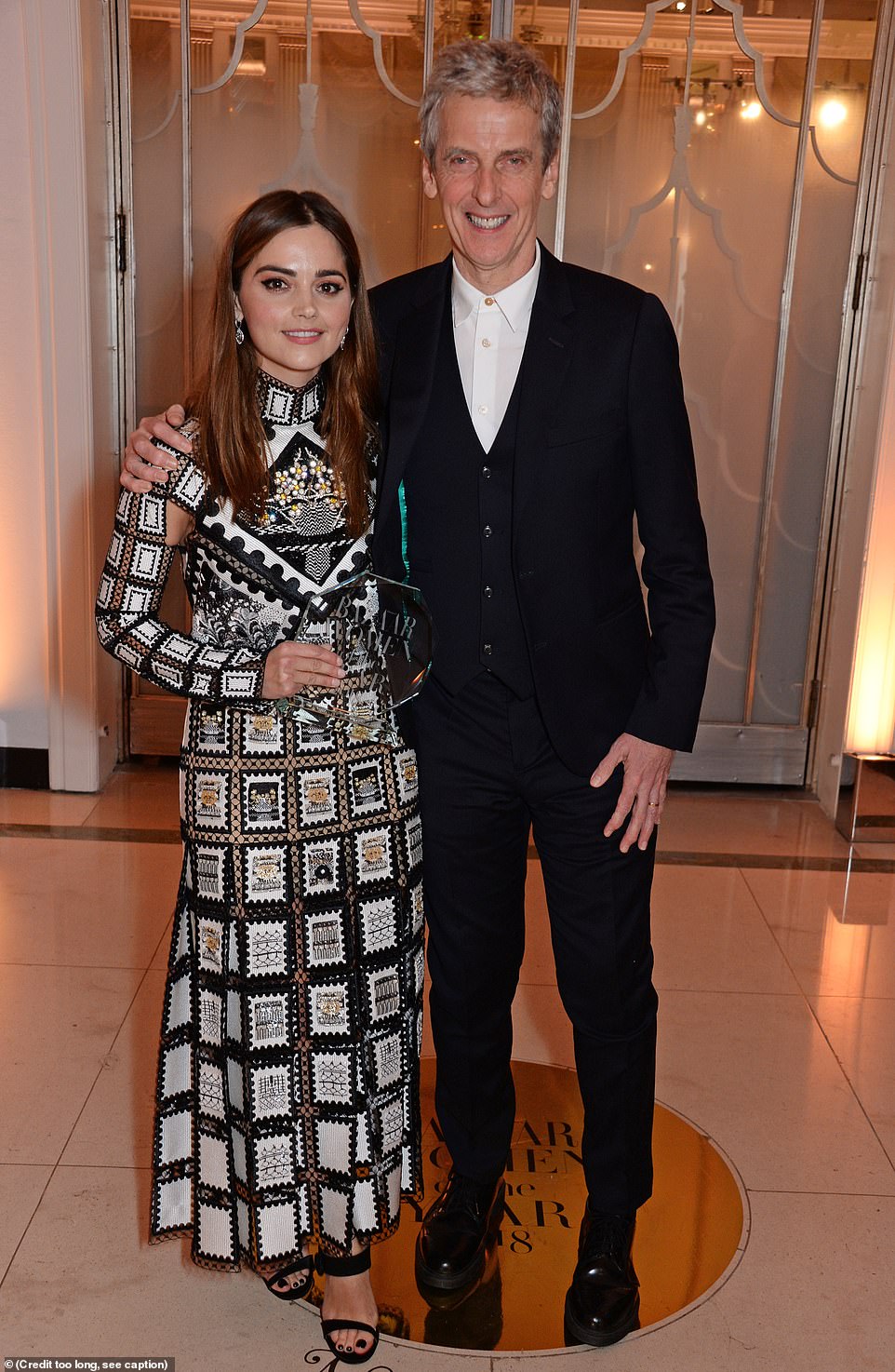 Stunner: Jenna was joined by her Doctor Who co-star Peter Capaldi as she showed off her gong from the evening

Jenna Coleman, 32, accentuated her slender physique as she donned a eye-catching maxi dress, which featured blue lace embroidery with bedded details throughout. Toning down her attention-grabbing look, the screen star added to her height in a pair of strappy heels, which showed off her black pedicure.

Former Emmerdale star Jenna ensured all eyes were on her as she accessorised with a pair of silver diamond-shaped dangle earrings. With her tresses in an effortlessly straight locks, the brunette wowed with her dark winged eyeliner look, complemented with light pink eyeshadow and nude lipstick.

Keira Knightley was turning heads in her own right as she oozed glamour in a baby blue gown, the 33-year-old actress was a vision of beauty on the evening. Featuring a high neckline and frilled detailing across the bodice, Keira proved that you don’t need to flash the flesh to get attention.

Stunning: Keira Knightley was turning heads in her own right as she oozed glamour in a baby blue gown, the 33-year-old actress was a vision of beauty on the evening 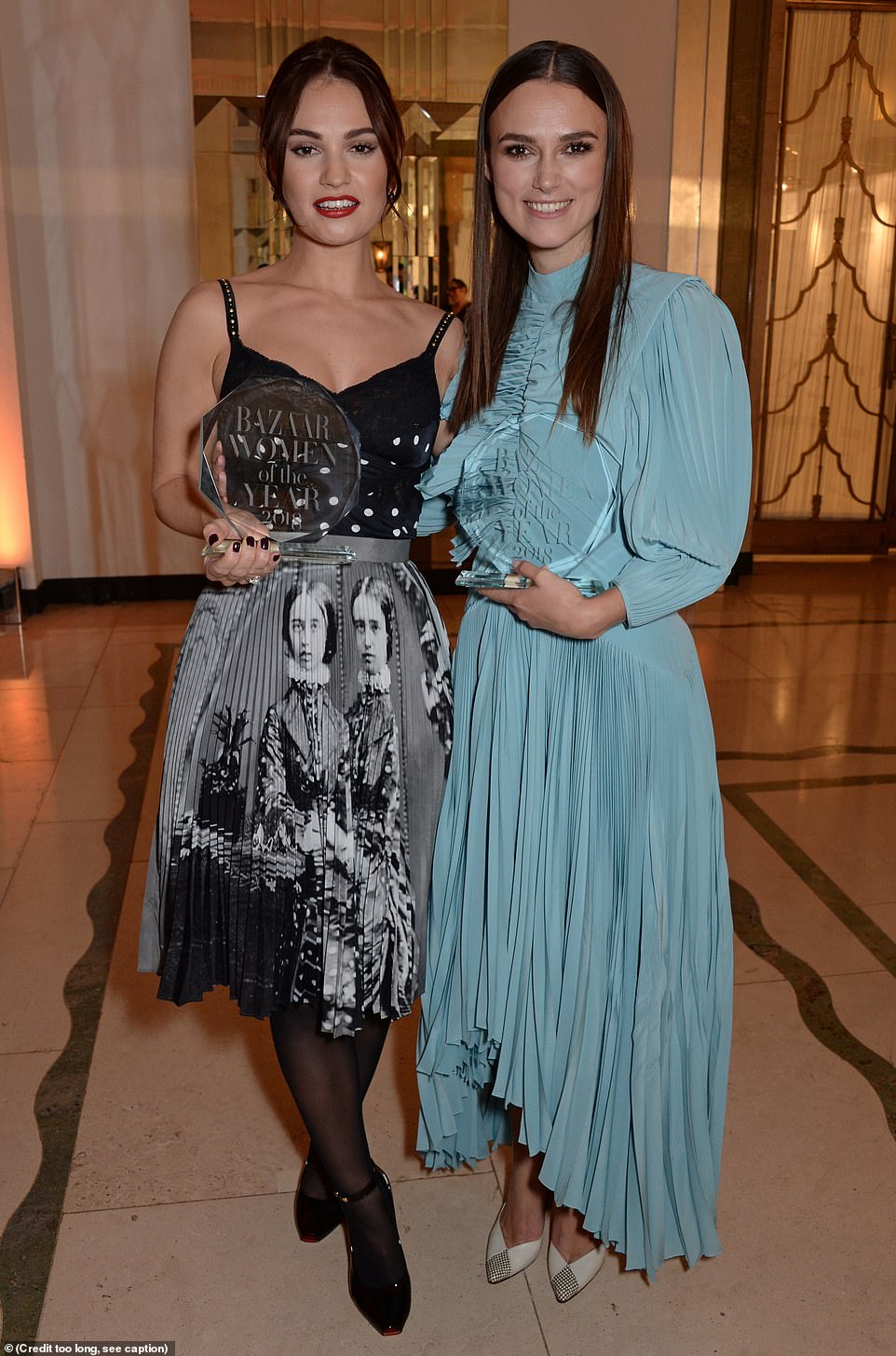 Feeling blue: Featuring a high neckline and frilled detailing across the bodice, Keira proved that you don’t need to flash the flesh to get attention (pictured with Lily James)

The stunning gown cinched in at her slender waist before flaring out into a hanky hemline that grazed her enviably lean legs. The mother-of-one finished off the look by toting a baby blue satin clutch bag, whilst a pair of cream and silver heels boosted her modelesque frame.

Keira became a mother for the first time when she welcomed daughter Edie into the world three years ago. She married her husband, former Klaxons keyboardist James Righton, 35, four years ago. And she addressed family, feminism and the Hollywood gender pay gap in a new interview with Harper’s Bazaar magazine.

Supermodel Arizona Muse, who announced she was expecting her second child in July, her first with her husband Boniface Verney-Carron, looked sensational in a black and white gown paired with a crimson coat.

Transgender girl who come out at nine says no one can stop transgender children transitioning
Corbyn praises Britain's Good Samaritans in his Christmas message
Britain is ‘completely and institutionally ageist’ says major care provider
Golden Globes: Christian Bale's 'fake' British accent mocked by fans
Is this the death of Venice? Colossal cruise ships towering over St Mark's Square
Boxing Day revellers ignore the chill and hit the streets
Britons facing heavy downpours with up to four inches of rain and 50mph winds set to batter the UK
Owners of a manor reputedly home to Cromwell's remains are accused of 'sacrificing' nearby village