Two former college football players falsely accused of rape by a fellow student are now suing her and the university which suspended them.

The lawsuit’s allegations against Yovino, 20, include slander and infliction of emotional distress. They also accused the school of wrongly suspending them. 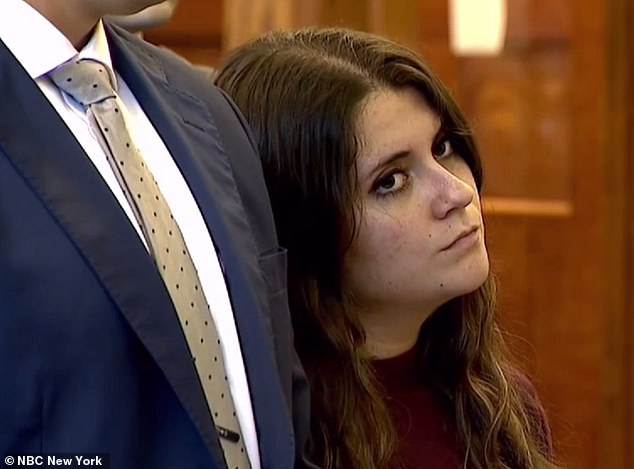 Nikki Yovino, 20, falsely accused schoolmates Malik St. Hilarie and Dhameer Bradley of rape at a party in October 2016. At her sentencing hearing in August, she appeared to roll her eyes 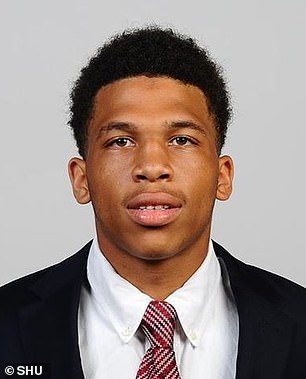 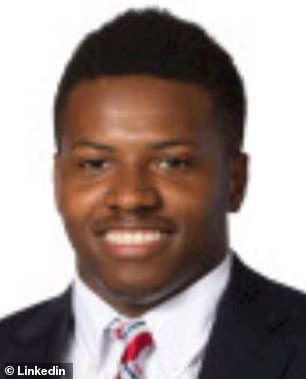 Malik St. Hilarie (left) and Dhameer Bradley filed suit against Yovino for slander and infliction of emotional distress on October 10. They also named Sacred Heart University in the lawsuit

Yovino was attending Sacred Heart University in Fairfield, Connecticut, when she reported being raped by two school football players — later identified as Dhameer Bradley and Malik St. Hilaire — at an off-campus party in Bridgeport, Connecticut, in October 2016.

Bradley and St. Hilaire said they and Yovino had consensual sex at an off-campus party.

But, police said she later admitted making up the allegations so she wouldn’t ruin a relationship with a potential boyfriend.

Yovino, 20, was sentenced in August to a year in prison after pleading guilty to falsely reporting an incident and interfering with police.

The football players were never arrested, but both withdrew from the school while facing possible discipline. 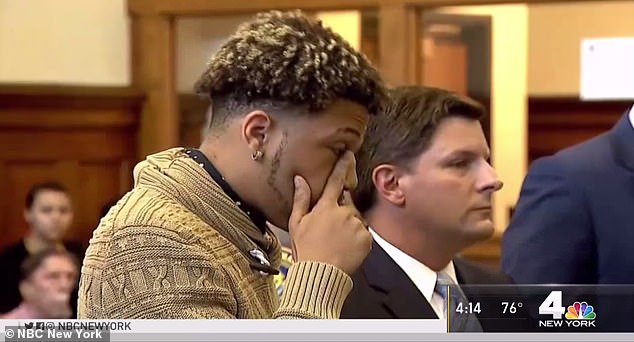 St. Hilarie was in court in August reading his victim impact statement when Yovino was said to have rolled her eyes and smirked, claims which her lawyer disputed 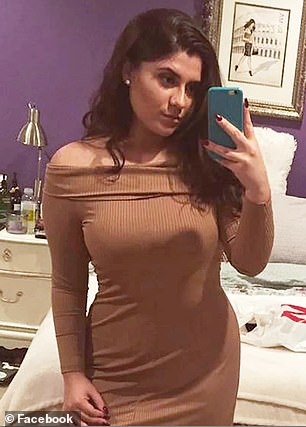 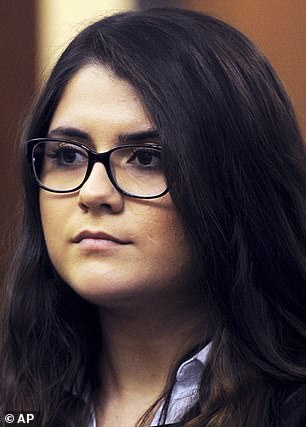 Yovino accused Bradley and St. Hilaire of raping her at the off-campus party, but the men said the sex was consensual. She was sentenced to a year in prison after pleading guilty to falsely reporting an incident and interfering with police

At her sentencing hearing, Yovino made headlines after it appeared that she had rolled her eyes and smirked while St. Hilaire read his victim impact statement in the courtroom, according to .

‘I went from being a college student to sitting at home being expelled with no way to clear my name,’ St. Hilaire said.

‘I just hope she knows what she has done to me, my life will never be the same. I did nothing wrong, but everything has been altered because of this.’

Frank Riccio III, who represented the football players, read a statement from a second man, who did not want to be identified at the time but is presumably Bradley.

In the statement, the former football player said that he lost his football scholarship because of Yovino’s allegations and suffers from depression and anxiety.

‘She accused me of what I believe to be a horrendous, horrific crime out of her own selfish concerns,’ the unidentified student’s statement read, according to .

‘I lost my scholarship, my dream of continuing to play football and now I am in debt $30,000 and I’m simply trying to get ahead as best as I can.’

According to Law & Crime, someone standing close to Yovino during the hearing said she also groaned as St. Hilaire spoke and she showed ‘no remorse’.

After the sentencing, Yovino’s attorney, Ryan O’Neill, said that there was no truth to the suggestion that she rolled her eyes during the hearing.

‘The claims that Nikki “rolled her eyes” in some sort of defiance of the process is false,’ O’Neill told , adding that proof was in the fact that the judge never reprimanded her or ‘commented on her demeanor, despite sitting directly in front of her.’

He said that she was merely looking around during the hearing and attempting to move her long hair out of her face without the benefit of her hands, which were handcuffed behind her back.

A lawyer for the university declined to comment about the lawsuit Monday. Yovino’s lawyer didn’t immediately return a message.

Caravan migrants arrive in Mexico City, bed down
Intern, 22, is mauled to death by a lion which escaped a locked enclosure at a North Carolina zoo
Piers Morgan apologises for not dying in hospital snap
Video shows beagles being force-fed fungicides at Michigan laboratory
Helen É Makeup Kit for just £20 for every reader!
Mom left shocked after kid's t-shirt arrives in the mail with 'F**k The Police' printed on it
Family Feud contestant to get $10,000 of fried chicken from Popeyes after an on-air gaffe
LA's first black DA slams BLM for targeting her home after her husband pulled a gun on protesters