She dropped a hint about wanting a Tiffany & Co engagement ring before fiance Nick Jonas proposed to her in July.

And Priyanka Chopra is clearly a huge fan of the historic jeweler maker – the bride-to-be held her bridal shower at the Blue Box Cafe inside the famed brand’s flagship store in Midtown Manhattan on Sunday.

The Indian-born actress put on a show-stopping preview to her pending nuptials as she strutted with elegance in a feathered bridal-like white dress. 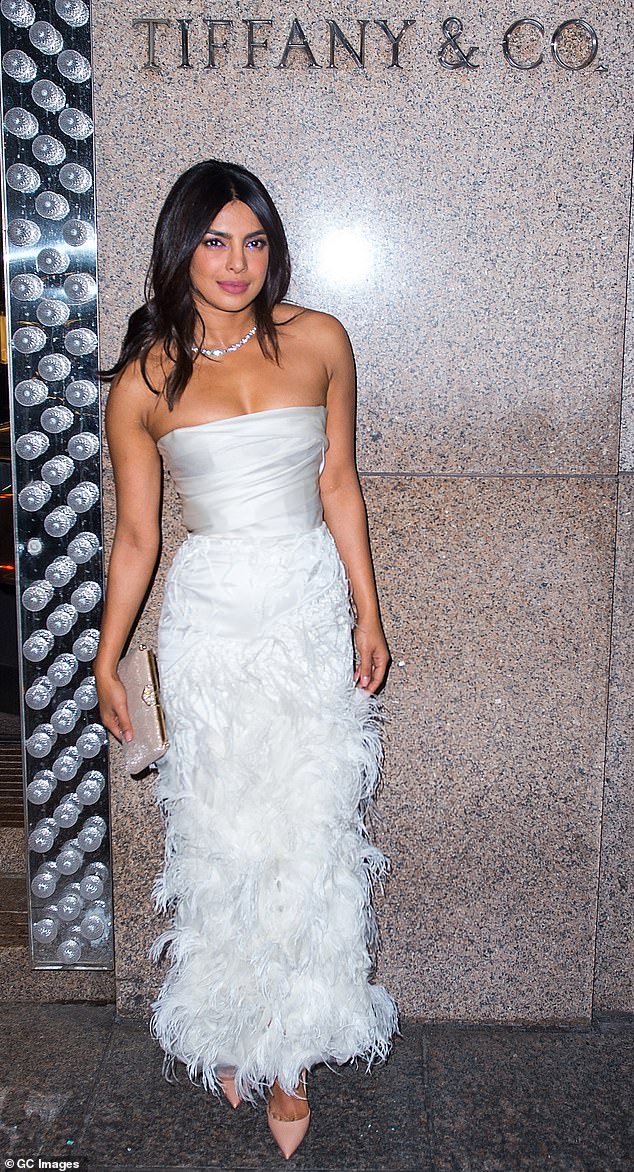 Making a statement: Priyanka Chopra look every bit the pending bride for her bridal shower at Tiffany & Co in New York City on Sunday 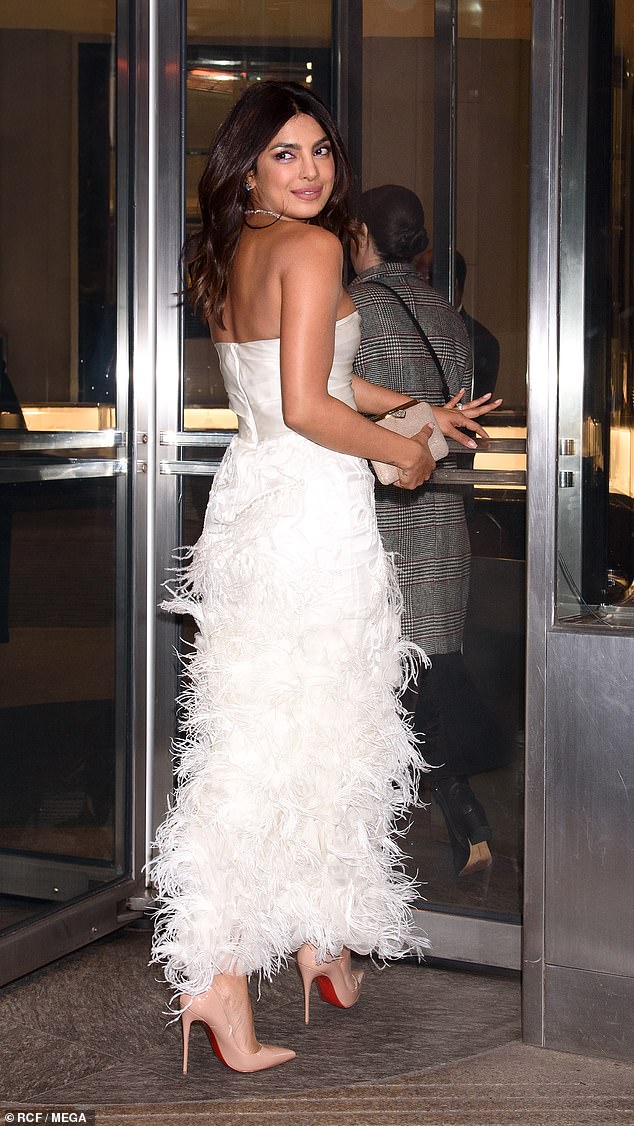 The former Miss World stunned when she made her entrance in the gorgeous strapless number that was equal parts elegant and sophisticated.

The upper portion glistened under the bright lights of photographers as it showed off her ample assets.

It feathered towards the bottom portion while hugging her lean but curvy figure.

And on this night to remember, the Bollywood star accessorized with a diamond necklace and earrings and wore her raven tresses long with added body and a part in the middle. 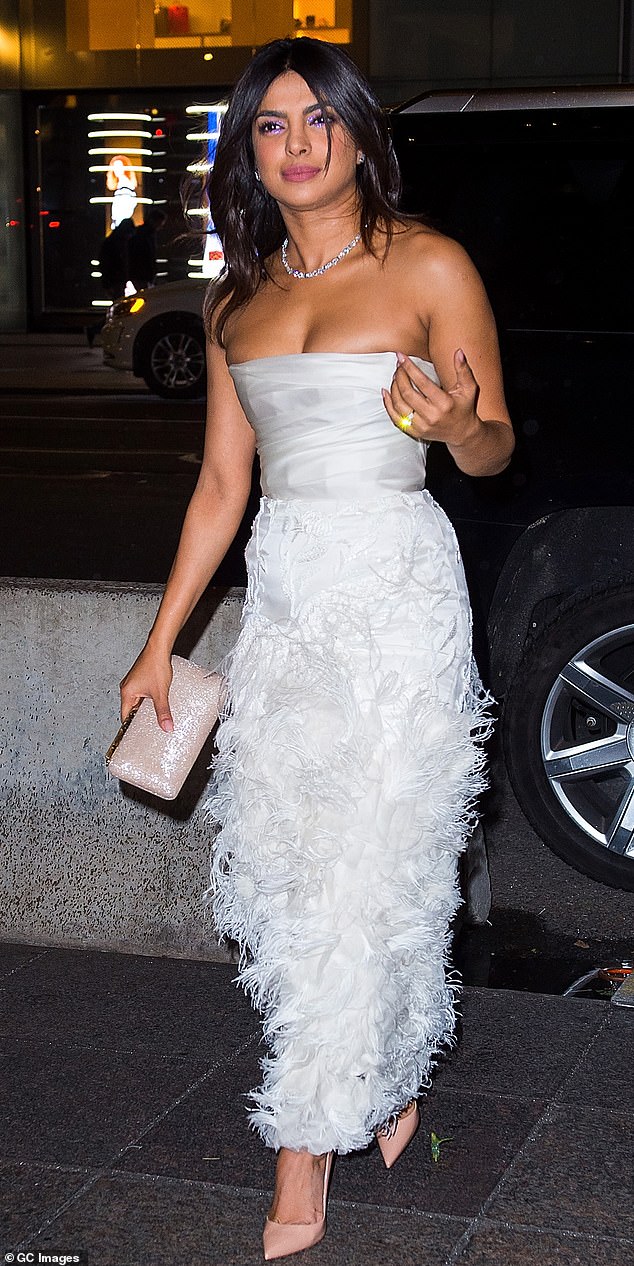 Elegant: The Indian actress put on a show-stopping preview to her pending nuptials with fiance Nick Jonas in a frilly bridal white dress 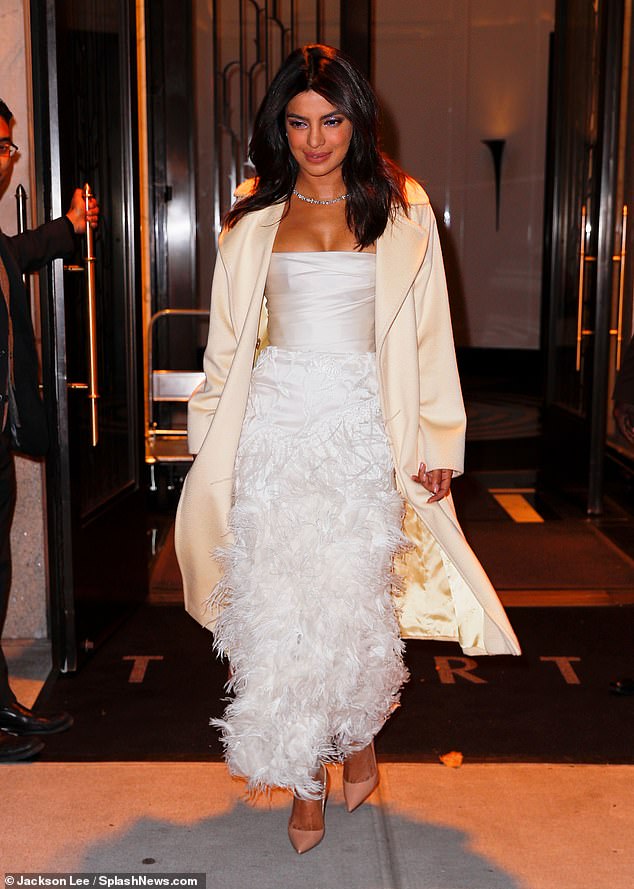 Sophisticated: The Indian actress flashed a confident smile as she left the building in NYC

Earlier in the day, Priyanka shared a photo on her Instagram Story of her getting her hair and makeup done for the shower as her friends stood beside her.

‘My girls r in town!’ she wrote in the caption, with the hashtags #anyreasontoparty and #preweddingcelebrations.’

Earlier in the day, Nick was spotted leaving Priyanka’s apartment at the Four Seasons in a matching charcoal ensemble as he flashed a relaxed grin at photographers. 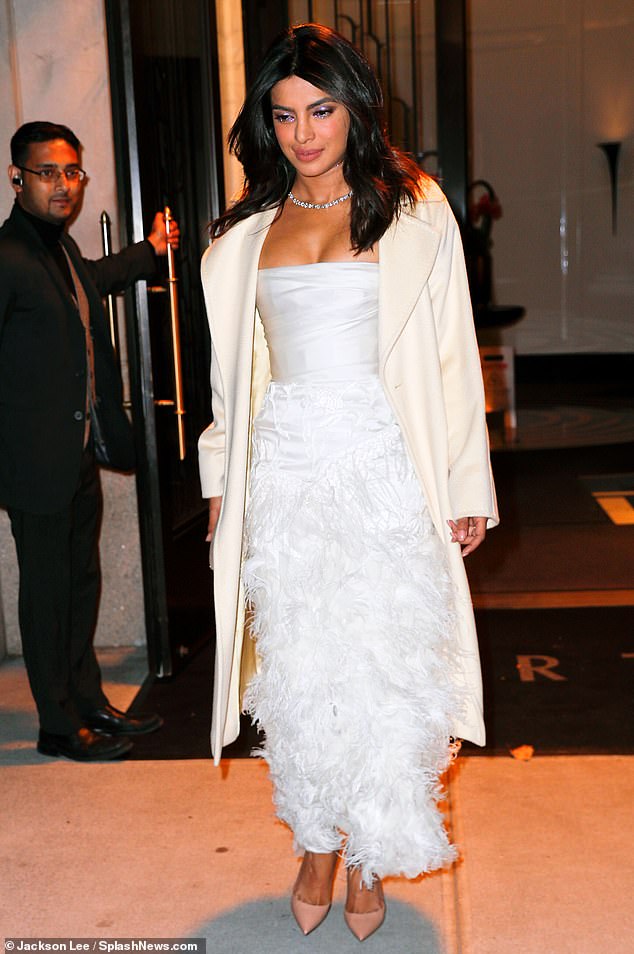 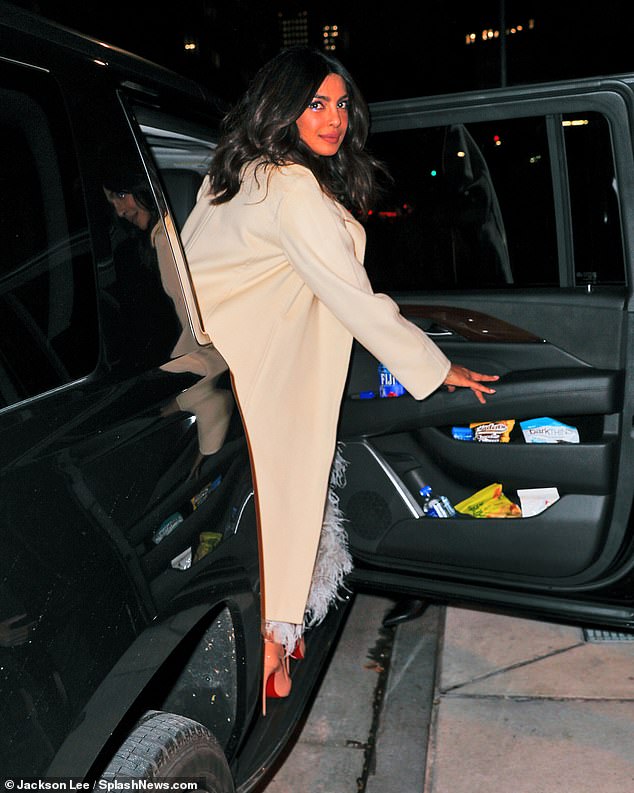 Movie star quality: The Bollywood star oozed glamour as she arrived for her festive night 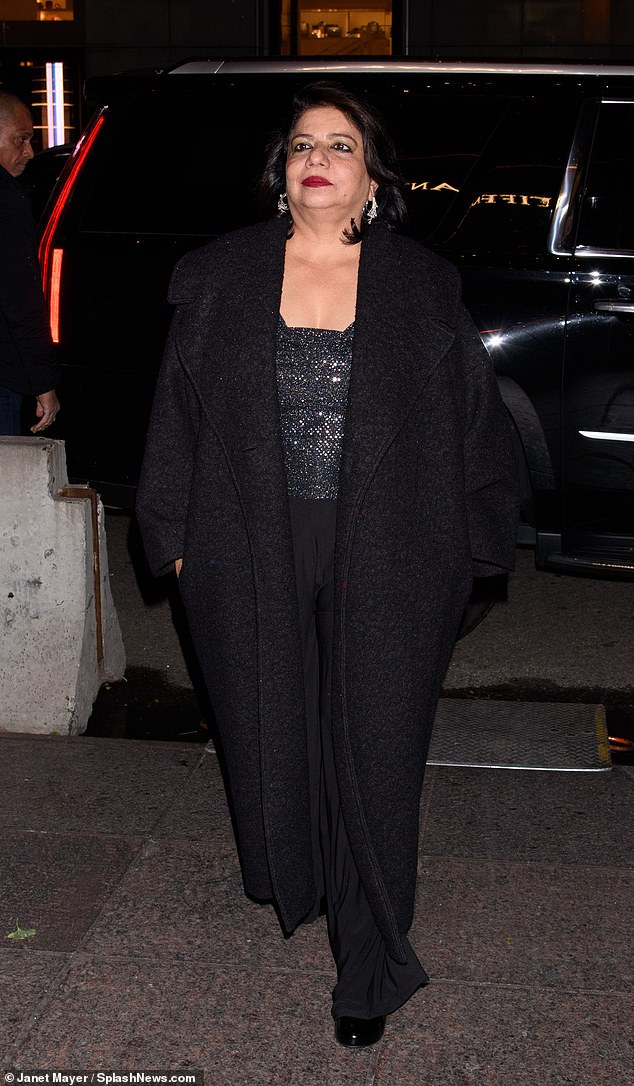 Priyanka Chopra and Nick Jonas will reportedly get married in December. A source told Us Weekly magazine: ‘The wedding is happening in India.’

It was previously revealed the couple plan to blend traditions from their respective cultures on their big day.

‘Priyanka is having a really good time planning the wedding because it’s a mix of Indian and American styles and customs, which she knows so much about,’ the source said.

The 36-year-old actress is also excited about starting a family with Nick as soon as they are married.

An insider said; ‘They have amazing chemistry and can’t wait to have kids. They are going to wait till after the wedding to start trying. But it’s definitely on the agenda.’ 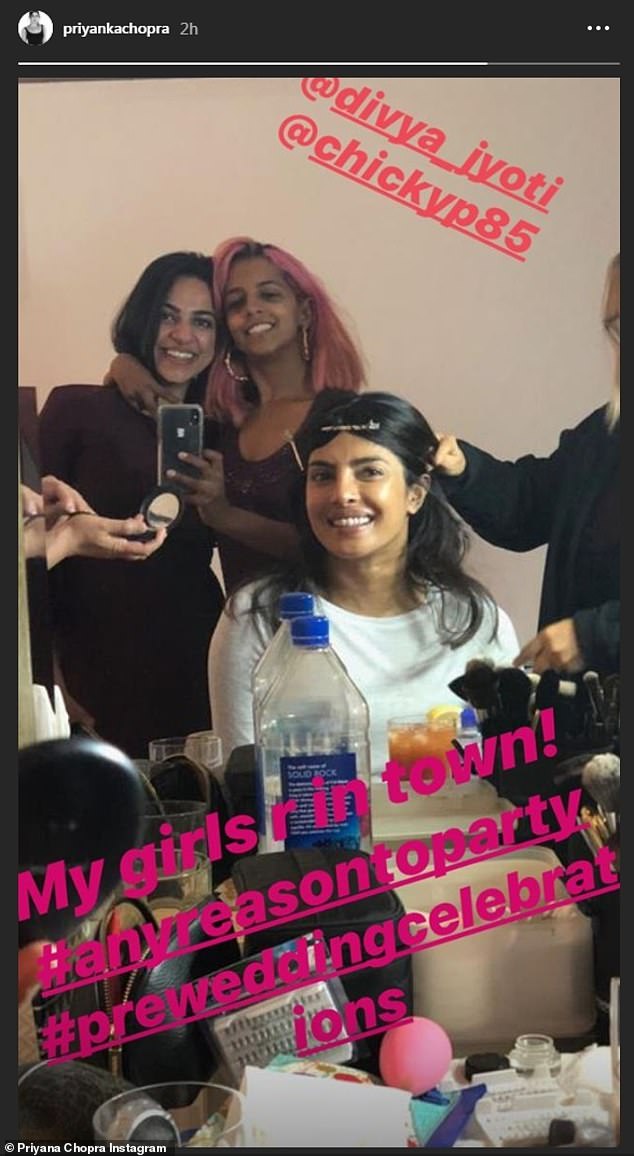 Friendly preps: Priyanka shared a photo of her getting her hair an makeup done in an Instagram Story 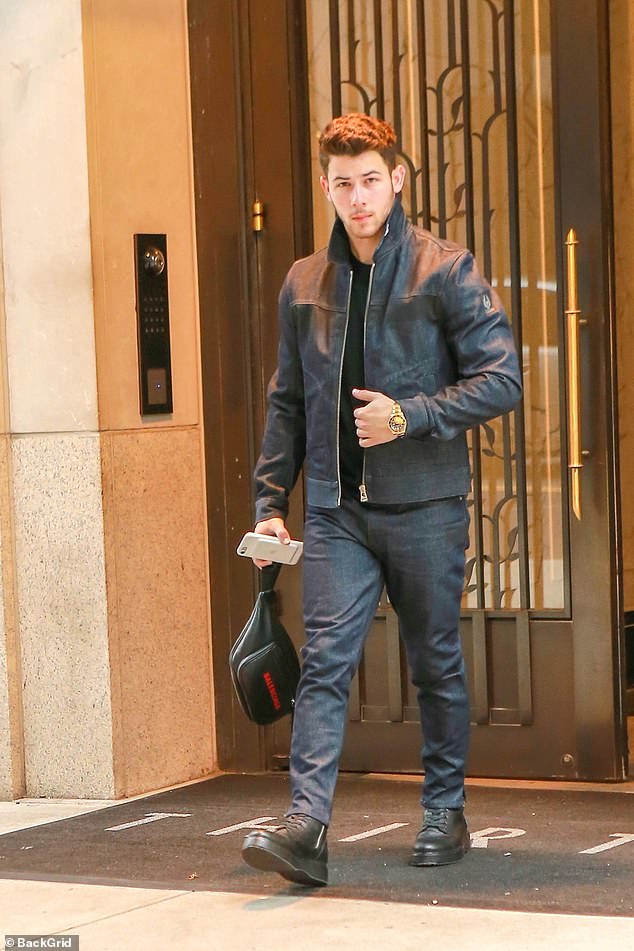 The Apprentice winner Sian Gabbidon grapples with her assets
My Kitchen Rules stars crack under pressure as they cook for previous contestants
Game Of Thrones' Night King star Vladimir Furdik admits Maisie Williams fight was 'very difficult'
Elizabeth Hurley, 54, showcases her age-defying physique in a navy and white striped bandeau bikini
Teen Mom turned porn star Farrah Abraham takes selfie with Jeff Bezos, suggests 'deal for biopic'
Elle Macpherson arrives in Adelaide wearing a ring on THAT finger after dating Andrew Wakefield
Frankie Essex flaunts her curves in a black frilled swimsuit as she frolics on the beach in Tenerife
The moment Tim Robards told his family he is expecting his first child with Anna Heinrich