The network’s website published an op ed over the weekend that was written by the group Students for Peace and Survival at Bethlehem Central High School, which is where Kelly attended high school in upstate New York.

And the title of the piece said it all: ‘Megyn Kelly went to our high school and, no, blackface wasn’t ‘OK’ here when she was a kid.’

The piece went online Sunday, two days after NBC had hoped to have wrapped up exit talks with Kelly.

That has not been the case however, and the network and embattled host are fighting over just how much of her $69 million contract will be paid out in the wake of her comments on blackface. 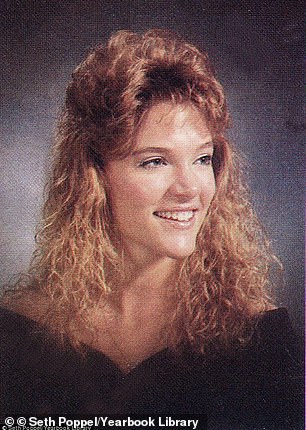 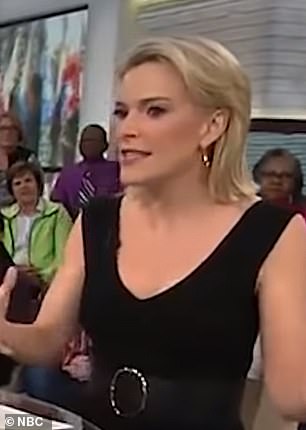 Then and now: NBC published a piece in which students at Megyn Kelly’s high school debunked the notion that blackface was acceptable when she growing up (Kelly in 1988 in high school on left, last week on right) 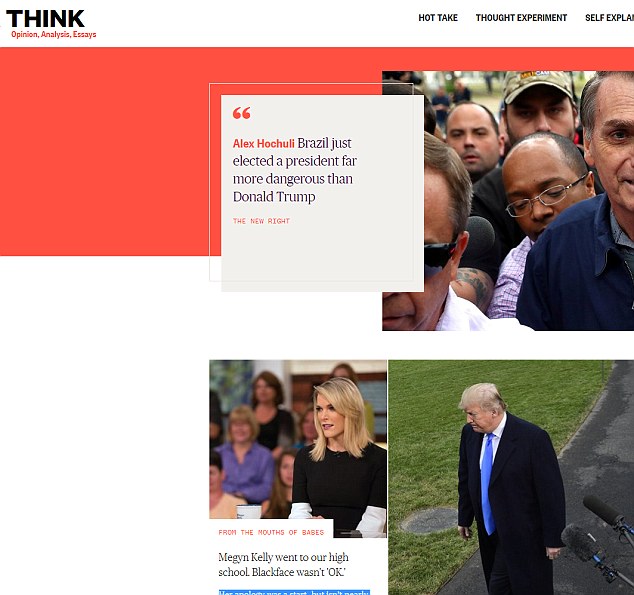 Front ans center: NBC gave the piece prominent placement on its website (above) in the 24 hours after it was published as the network tries wrap up exit talks with the host 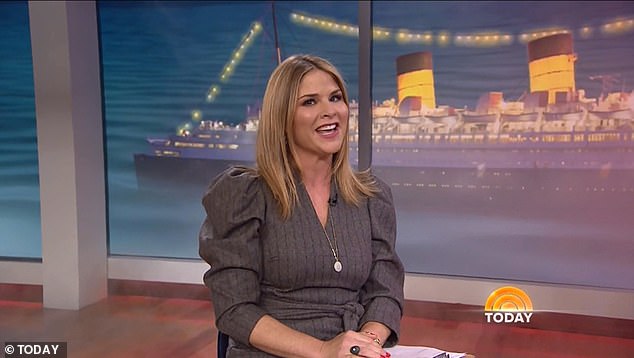 On Today: Jenna Bush Hager took over for Megyn Kelly on Thursday, appearing halfway through the third hour of Today

The piece was written by current students at the high school and not Kelly’s own classmates, though the authors are quick to explain why they feel confident in their response to her blackface remarks.

‘We weren’t alive when Megyn was in high school but, in the recollection of many of our parents who grew up around here, it was not acceptable even in the 1980s town that she knew. ‘

The teenagers then discuss the fact that their town is largely homogenous, which has led to racial issues, and that minstrel shows were performed as fundraisers at the school until the late 1960s.

‘Racism might have become more subtle in the intervening years, but it remains just as potent a force in the society into which we’re about to enter as adults,’ reads the op ed.

‘The reason that Megyn’s comments about blackface being ‘OK’ when she was a kid (let alone her statement at the time that ‘I don’t know how [blackface] got racist on Halloween,’ in response to prior critics of the practice) were so offensive is that blackface is a projection of the racism that lies much deeper, and a symbol of times that are not quite as far past as we may wish to admit.’

The writers then continue: ‘As young people, we know that racial stereotyping and institutional discrimination hurts all of our futures. On race and so many other issues, our generation is waking up to a world in need of fixing — and it’s falling on us to make change happen.’

There is an acknowledgement of the fact that Kelly did apologize and the recognition that all people misspeak from time to time, but the piece then points out that ‘retroactively showing “sensitivity” isn’t nearly enough to prevent the cycle from continuing.’

The 25 students then close out by debunking some conceptions about the youth of America.

‘There is often an idea today that young people like us are apathetic, brainwashed into certain ideals by those above us and too disengaged to make a difference. Nothing could be further from the truth. We’re speaking for ourselves here, as our own small part in the conversation America needs to have,’ writes the group.

‘If there’s one thing about our generation, it’s that we do not accept the status quo. Perhaps it’s naïveté, but in a society still bearing the scars of the times of blackface, a little bit of the innocence of hope might be necessary.’

NBC News gave the piece a very prominent placement on its opinion vertical in the 24 hours after it was published, despite the many major news events that took place around the country over the past four days.

The headline is written out in full on the page, while the preview for the piece reads: ‘Her apology was a start, but isn’t nearly enough to prevent the stereotyping and discrimination that hurts all our futures.’ 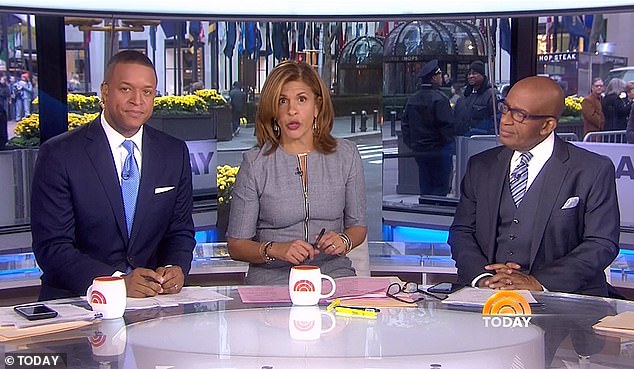 But first: Hoda Kotb, Craig Melvin and Al Roker appeared at the top of the third hour on Today Monday (above) due to the breaking news out of Pittsburgh 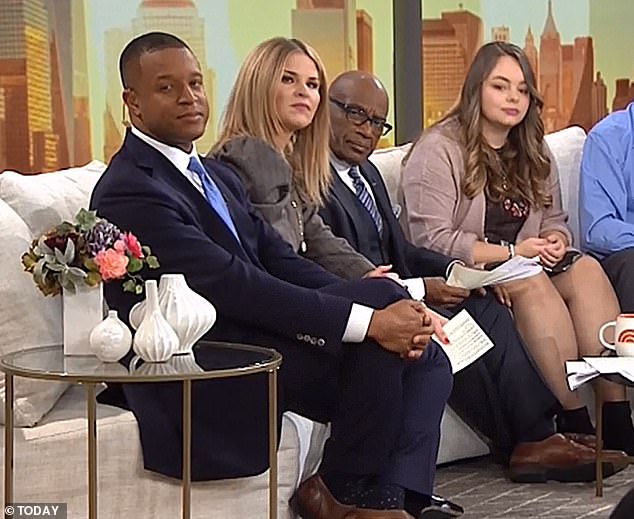 Segment: Melvin and Roker joined Jenna Bush Hager to shoot in the $10 million studio NBC built for Kelly, though there was no studio audience on Monday (Melvin, Hager and Roker doing a segment about first responders on Monday above) 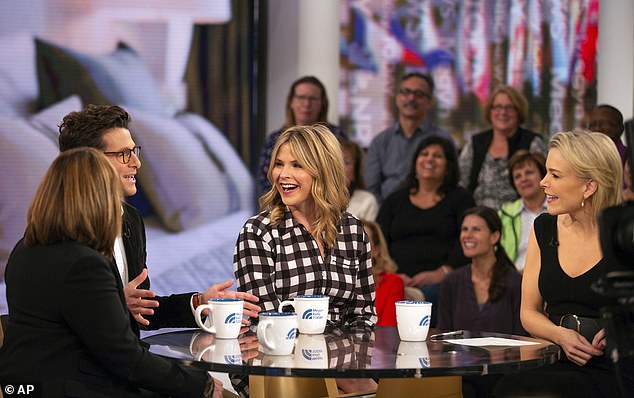 The day: It was written by 25 students and titled: ‘Megyn Kelly went to our high school and, no, blackface wasn’t ‘OK’ here when she was a kid’ (Kelly last week with her panel on the day she made her blackface remark)

“Today, as you know, we are starting a new chapter in the third hour of our show as it evolves. We want you to know that the entire TODAY family will continue to bring you informative and important stories, just as we always have.”

Kelly was replaced by Jenna Bush Hager on Monday when Today aired a new episode of the third hour for the first time since the embattled host was ousted from the NBC morning show.

She did not appear however until the second half of the third hour, as the show kept the focus on the news out of Pittsburgh for much of the episode, where Savannah Guthrie was reporting for the network.

There was a brief mention of the recent events at the top of the program, when Hoda Kotb, Craig melvin and Al Roker kicked off the hour, but no mention of Kelly’s name.

‘Today, as you know, we are starting a new chapter in the third hour of our show,’ said Kotb.

‘And as it evolves we want you to know the entire Today family will continue to bring you informative and important stories just as we always have.’

Kotb only appeared at the top of the hour in light of the show’s breaking news coverage following the mass shooting at a synagogue over the weekend.

As a result, the reveal of who was replacing Kelly was delayed for some time, with Kotb finally announcing halfway through the hour that Hager would be taking over the show after the commercial break.

Hager was then seen alone in Kelly’s studio, which was shot to look incredibly small and intimate despite the $10 million that was spent to build the venue.

There was also no live studio audience.

Hager did her first segment alone before being joined on a couch by Melvin and Roker for an interview.

It was a very low key and dialed back affair, but one that seemed to make use of Kelly’s crew.

It was announced on Friday that Kelly would not be returning to the third hour of Today.

‘Megyn Kelly Today is not returning. Next week, the 9 a.m. hour will be hosted by other TODAY co-anchors,’ said a spokesperson.

Kelly’s lawyer was quick to issue a statement in the wake of that announcement, saying: ‘Megyn remains an employee of NBC News and discussions about next steps are continuing.’

She is currently still being paid.