The billionaire Thai owner of Leicester City Football Club died when his helicopter crashed just metres from the club’s stadium on Saturday.

The club issued a statement late on Sunday confirming Vichai Srivaddhanaprabha and four others were killed when the aircraft fell from the sky and burst into flames at the south east end of the King Power Stadium at about 8.30pm. 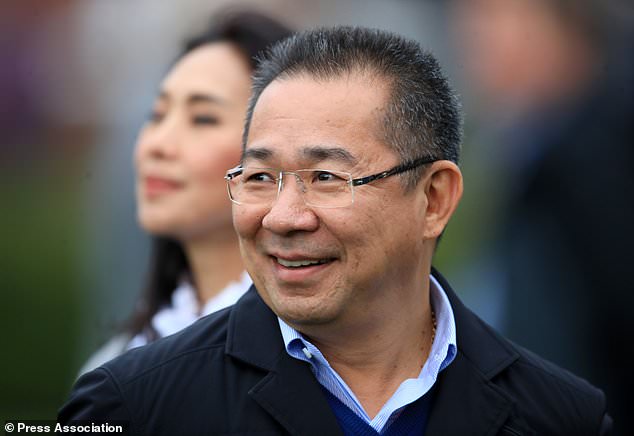 The club added: “It is with the deepest regret and a collective broken heart that we confirm our chairman, Vichai Srivaddhanaprabha, was among those to have tragically lost their lives on Saturday evening when a helicopter carrying him and four other people crashed outside King Power Stadium. None of the five people on-board survived.

“The primary thoughts of everyone at the club are with the Srivaddhanaprabha family and the families of all those on-board at this time of unspeakable loss.

“In Khun Vichai, the world has lost a great man. A man of kindness, of generosity and a man whose life was defined by the love he devoted to his family and those he so successfully led.

“Leicester City was a family under his leadership. It is as a family that we will grieve his passing and maintain the pursuit of a vision for the Club that is now his legacy.

“A book of condolence, which will be shared with the Srivaddhanaprabha family, will be opened at King Power Stadium from 8am on Tuesday 30 October for supporters wishing to pay their respects.”

The club said an online book of condolence will be put on its website for supporters unable to visit the stadium to leave tributes.

It said Tuesday’s first team fixture against Southampton in the EFL Cup and the development squad fixture against Feyenoord in the Premier League International Cup had been postponed.

It added: “Everyone at the Club has been truly touched by the remarkable response of the football family, whose thoughtful messages of support and solidarity have been deeply appreciated at this difficult time.”

The force said formal identification had not been completed and no one else was believed to be injured.

Superintendent Steve Potter said: “This is an incredibly tragic incident in which five people are understood have lost their lives.

“Emergency services were immediately on scene when the crash happened, working to put out the fire and gain access to the helicopter in attempts to reach those inside. Despite those efforts, there were no survivors.

“The AAIB is now leading an investigation to establish the exact circumstances surrounding the crash and investigators will remain at the scene to complete their initial enquiries.

“It is likely to take several days to fully complete the necessary work and to safely deal with the scene of this tragic accident, during that time we ask that both the media and public resist speculating around the cause of the crash.

“Our thoughts today are with the families of those who have sadly died, with Leicester City Football Club, and with both football supporters and the wider local community who have all been impacted by the events of last night and the news that those on board the aircraft have not survived.”

The air accident watchdog has launched an investigation into why the aircraft fell to earth in a car park near the stadium a few hours after Leicester drew 1-1 with West Ham.

Witnesses said the helicopter seemed to spiral out of control moments after it set off from Leicester’s King Power Stadium at about 8.30pm on Saturday and plummeted into the car park.

Mr Srivaddhanaprabha, who became chairman of the club in 2011, is known for arriving and leaving the stadium in his helicopter at home games.

The aircraft’s manufacturers said it was the first accident involving one of its Agusta Westland AW169 helicopters.

The tragedy is being described as the “darkest day” in the club’s history, and mourners began laying wreaths near the stadium on Sunday morning.

Bouquets, flags and football shirts have been left outside the ground by members of the public on Sunday morning alongside a large image of the Hindu god Ganesh which was also propped up amidst the flowers. 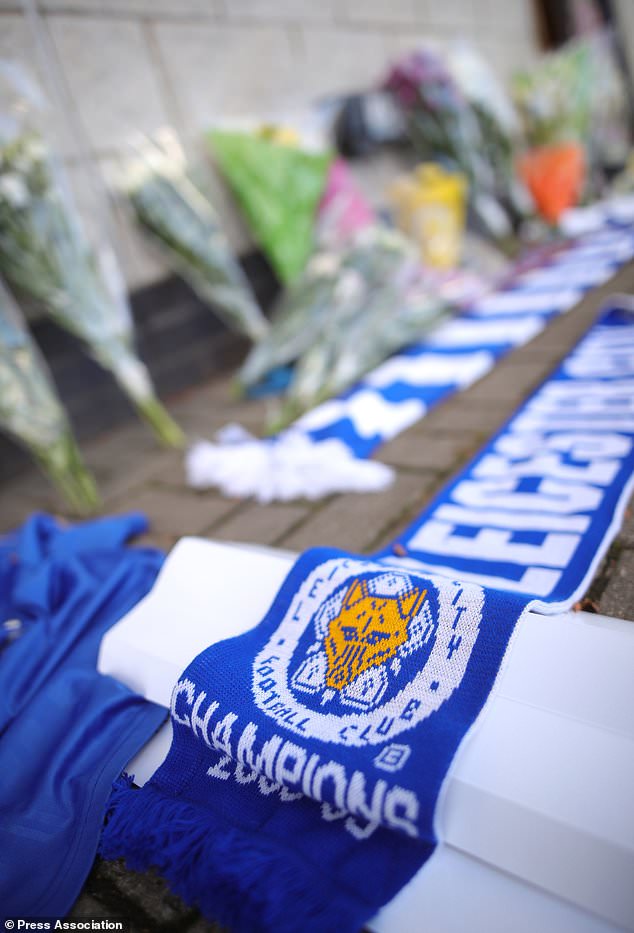 A small candle was placed in front of the flowers as more people gradually gathered to pray for anybody who may have been on the helicopter.

Messages from Leicester fans on the flowers included “In our thoughts!!” and “Thank you xx”.

One fan left a card of a fox with their flowers which read: “Thinking of you all.”

Self-made Thai billionaire Mr Srivaddhanaprabha very highly thought of in the city after he bought the Foxes for £39 million in 2010, and became chairman the following February. 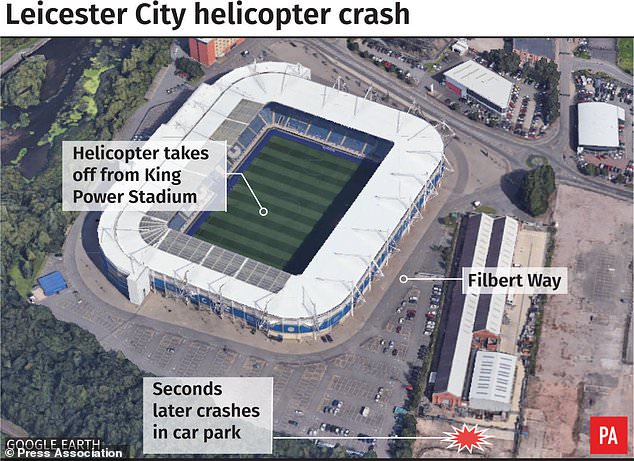 Under his ownership the club rose out of the Championship and eventually won the Premier League for the first time in its history in 2015-16, defying odds of 5,000-1.

The 60-year-old is also praised for his charity work, donating £2 million towards a new children’s hospital.

Leicestershire Police has said the Air Accident Investigation Branch (AAIB) will now be leading the investigation into the circumstances of the helicopter crash.

The AAIB confirmed on Sunday morning its investigators had been deployed at the site.

A spokesman added: “A team from the AAIB has been deployed to the site and is investigating. Anyone with information that might be helpful to the investigation is asked to contact the police.”

In a statement released in the early hours of Sunday, the police said: “The aircraft came down in a car park near the stadium shortly after 8.30pm yesterday evening (Saturday 27 October) with Leicestershire Police, East Midlands Ambulance Service and Leicestershire Fire and Rescue Service all responding to the incident.

“A cordon is currently in place at the scene to enable the AAIB to examine the area and complete their initial enquiries.

“Leicestershire Police will be supporting the AAIB in its investigation, liaising closely with Leicester City Football Club as enquiries continue.”

A Leicester City spokesman said: “We are assisting Leicestershire Police and the emergency services in dealing with a major incident at King Power Stadium. The Club will issue a more detailed statement once further information has been established.”

East Midlands Ambulance Service said the alarm was raised at 8.38pm and it sent a doctor, ambulance and team of paramedics alongside a hazardous area response team to the car park outside the stadium. 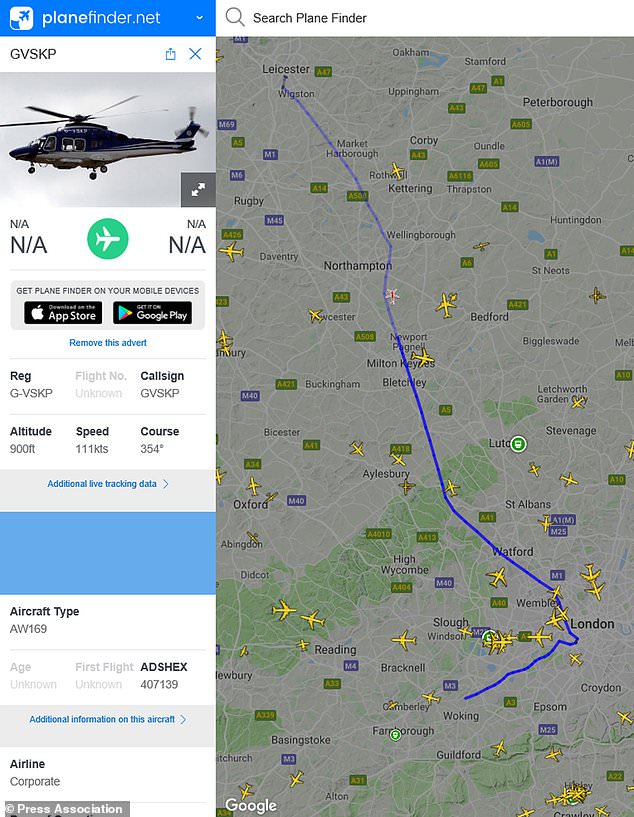 The route taken by the helicopter (Planefinder/PA)

The website Planefinder said that Mr Srivaddhanaprabha’s Agusta Westland AW169 helicopter set off from near Fairoaks Airport in Surrey at about 2.45pm on Saturday, and travelled into Fulham, west London, before turning north and proceeding to the King Power Stadium in Leicester.

Sydney Opera House to promote Everest horse race amid Alan Jones' calls landmark’s boss to be sacked
Ruby, Rahul, Kim-Joy, and Briony struggled in the semi-final of The Great British Bake Off
Blaney 200-mph Texas pole; all 4 Stewart Haas cars in...
Incredible footage shows hot water instantly freezes as people throw it into the air on a -43.5C day
Spectacular avalanche engulfs truck in seconds as a Russian mountain road is blocked
PETER OBORNE: Tory MPs ridicule him - but is Boris the man to save the sinking Tories?
Queen Letizia and King Felipepay an emotional visit to Murcia after deadly floods
Thousands of you entered, now meet our winner: I've won - and it's all thanks to Granny!