A peer has sparked fury by appearing to blame ‘s policies for the Pittsburgh synagogue massacre which killed 11 people.

Jewish worshipers were gunned down at a synagogue on Saturday morning in what is believed to be the worst anti-Semitic attack in recent US history.

Responding to the bloody atrocity, Baroness Jenny Tonge posted a message on saying the policies of Israeli PM Benjamin Netanyahu – known as ‘Bibi’ – is fuelling the anti-Semitism which led to the massacre.

Her remark was branded ‘abhorrent’ by Jewish leaders and campaigners who furiously demanded she is stripped of her peerage.

The peer wrote on Facebook:  ‘Absolutely appalling and criminal act, but does it ever occur to Bibi and the present Israeli government that its actions against Palestinians may be reigniting anti-Semitism?

‘Some people will not know the difference between the Zionist government in Israel and Jewish people in all countries who do not support that government’s actions. We must never conflate the two.

‘I suppose someone will say that it is anti-Semitic to say so?’ 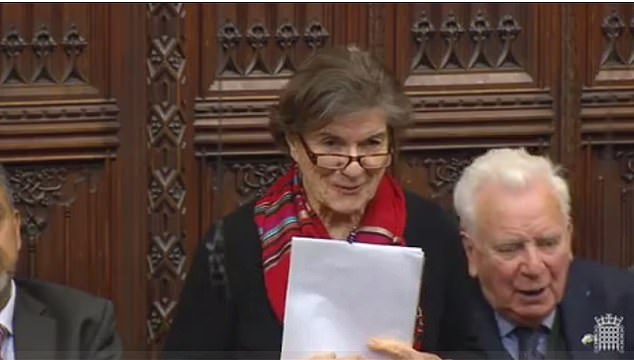 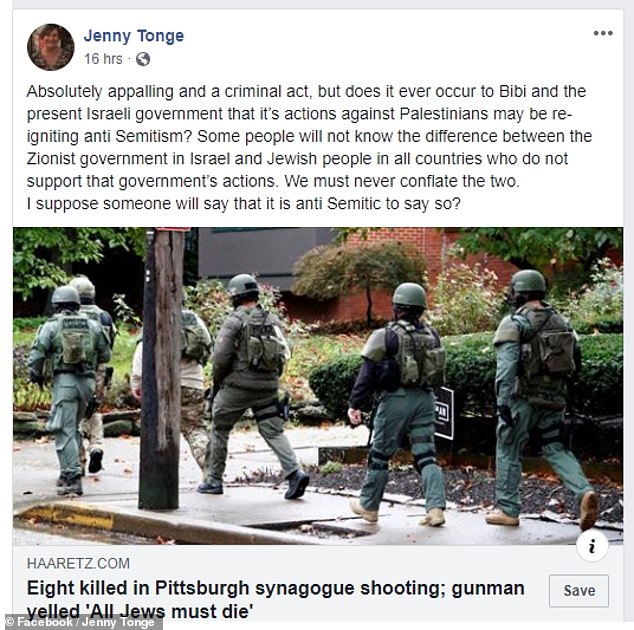 Responding to the bloody atrocity, Baroness Jenny Tonge posted a message on Facebook saying the policies of Israeli PM Benjamin Netanyahu – known as ‘Bibi’ – is fuelling the anti-Semitism which led to the massacre

But her post – which included a link to an article about the massacre – sparked an immediate backlash.

Board of Deputies President Marie van Der Zyl said: ‘Jenny Tonge’s craven comments are a reminder of why she was ejected by the Liberal Democrats.

‘We will be making a complaint to Parliamentary Standards.’

A spokesman for the Campaign Against Anti-Semitism said: ‘Attempting to blame the Jewish state for the actions of a neo-Nazi terrorist while, the bodies of his innocent victims are not yet cold, is utterly abhorrent.

‘The Liberal Democrats, which secured Baroness Tonge’s seat in the House of Lords must now campaign for her to be removed from the legislature and stripped of her title.’ 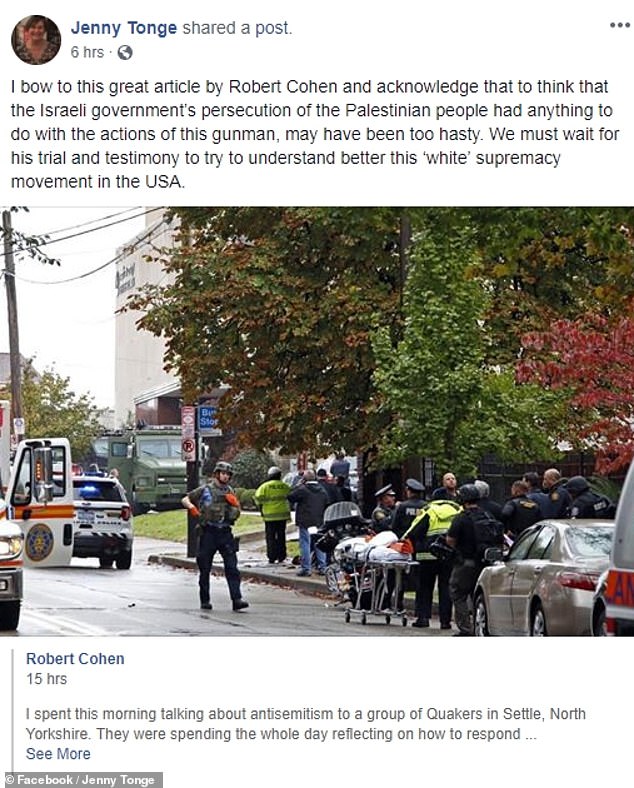 Following an outcry to her Pittsburgh massacre post, she furiously tried to backtrack and admitted she may have been ‘too hasty’

Baroness Tonge was suspended by the Lib Dems in October 2016 after hosting an event where an audience member said Jews were responsible for the Holocaust.

She quit the party a few days after her suspension and now sits in the House of Lords as a crossbench peer – meaning she is not a aligned to any political party.

Following an outcry to her Pittsburgh massacre post, she furiously tried to backtrack and admitted she may have been ‘too hasty’.

In another Facebook post put up several hours later, she wrote: ‘I bow to this great article by Robert Cohen and acknowledge that to think that the Israeli government’s persecution of the Palestinian people had anything to do with the actions of this gunman, may have been too hasty.

‘We must wait for his trial and testimony to try to understand better this ‘white’ supremacy movement in the USA.’

Robert Bowers, 46, has been charged with murder after he allegedly opened fire at the Tree of Life synagogue during its Sabbath service.

President Donald Trump described the attack as a ‘wicked act of mass murder’.

Rouhani says new U.S. sanctions have no effect on Iran...
Inside the Beckham's lavish £30,000 New Year's Eve party at their Cotswolds home
Fast 800 diet: If you want to shed the pounds you have to do it fast!
Scam victims to be refunded as new code fights bank transfer fraud
Identical twin, 34, overdosed and died almost 15 years to the day after her sister killed herself
French restaurant is crowned the best in the world as list of 50 top eateries is revealed
Alliance of Remainer MPs launch secret plot to revoke Article 50 and stop Brexit next month
Hayden Panettiere's boyfriend Brian Hickerson is arrested again for domestic violence