A miracle baby weighing just 1lb and 1oz was born this week – despite doctors telling her parents that she was unlikely to live.

Baby Hallie Sofia Dury, due on January 8, was born at the University Hospital of Wales in Cardiff on Tuesday and is so small that she can fit in her mother’s hand.

Mother Robyn Bryant and her partner James Dury got to meet their baby girl this week, after being told to prepare for the worst during Robyn’s pregnancy.

At just 20 weeks pregnant, the couple – from Cwmparc in the Rhondda – were told that daughter Hallie could die in Robyn’s womb at any time. 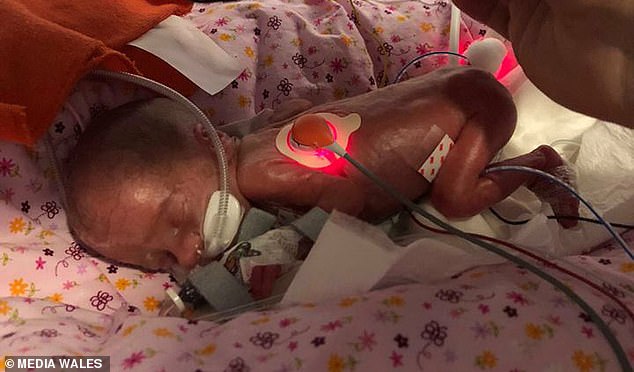 Baby Hallie Sofia Dury defied all the odds and was born earlier this week, to the delight of her parents who had been told to expect the worse

However, Hallie defied the odds and came out ‘screaming, crying and breathing’ on her own.

She is now continuing her battle in the high dependency unit, where she’s expected to stay until she’s strong enough to go home.

Robyn said: ‘We went to our private gender scan and they picked up that Hallie’s femur was a bit short and that she wasn’t growing how she should have been.

‘She was around two weeks behind.’ 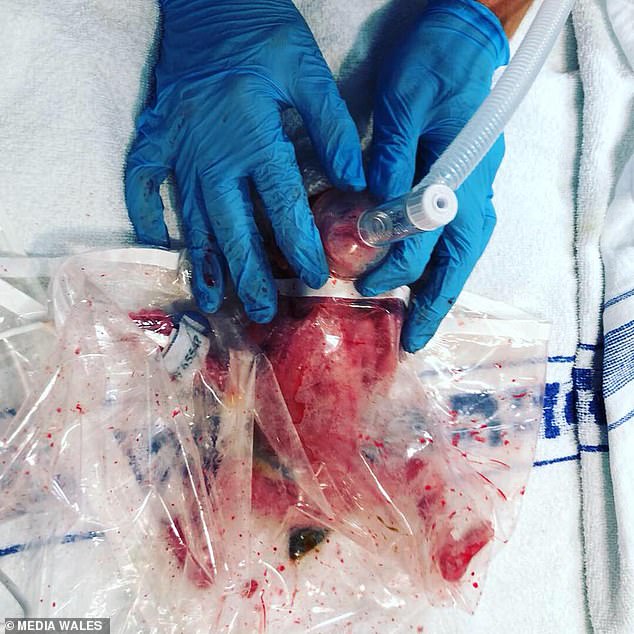 She was born weighing just 1lb, 1oz (500g) and was delivered 11 weeks prematurely via emergency caesarean

At the 20 week scan, Hallie was measuring further behind again and Robyn was sent for a number of different tests – including some that her and her partner chose to pay privately for.

However, these tests all came back clear, leaving the parents worried and confused as to what was wrong with their unborn baby.

Eventually, doctors advised Robyn to undergo amniocentesis – a test to check whether a baby has a genetic or chromosomal condition.

Amniocentesis sees a long, thin needle being inserted into the stomach and tests a small sample of cells from the fluid that surrounds the unborn baby in the womb. 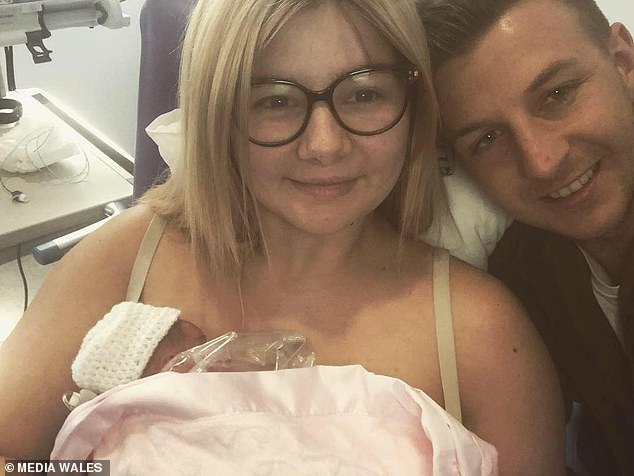 At just 20 weeks pregnant, the couple were told by doctors that Hallie could die in Robyn’s womb at any time

Robyn said: ‘I knew there was a risk of having a miscarriage with the test, so I avoided it at first.

‘I kept booking it and cancelling it.’

But after further scans showed that Hallie had a number of complications, including a fused kidney, Robyn decided to go ahead with the test.

‘I went to have the test, but everything came back clear,’ she said.

‘I wouldn’t say it was a relief, because I would have loved and cared for her no matter what happened. But, we just wanted to know what was wrong so we could sort out what care she might have needed.’ 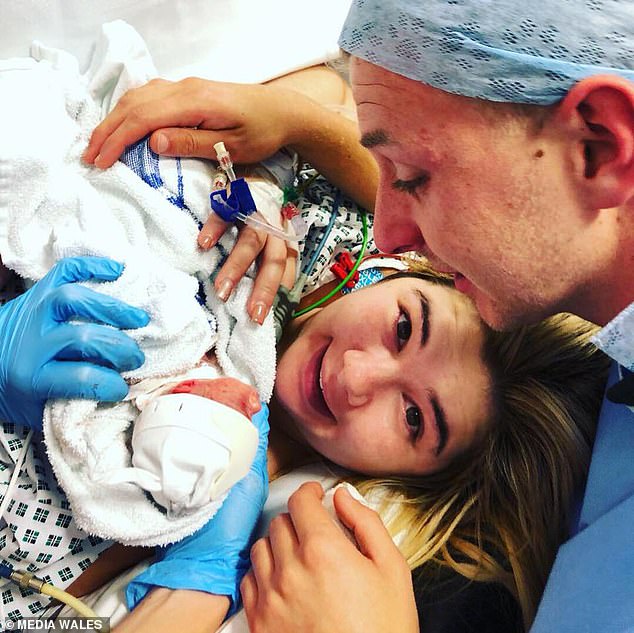 Baby Hallie is now continuing her battle in the high dependency unit, where she’s expected to stay until she’s strong enough to go home

Throughout the pregnancy – which Robyn described as being ‘very stressful’ – the couple were continuously told to prepare for the worst.

‘From 20 weeks, we were told almost weekly, that Hallie could pass away at any time.

‘We were told not to expect a heartbeat at the next scan.

‘But I was always positive. I had hope.

‘My motherly instincts told me everything was going to be OK. I didn’t care what they said.’ 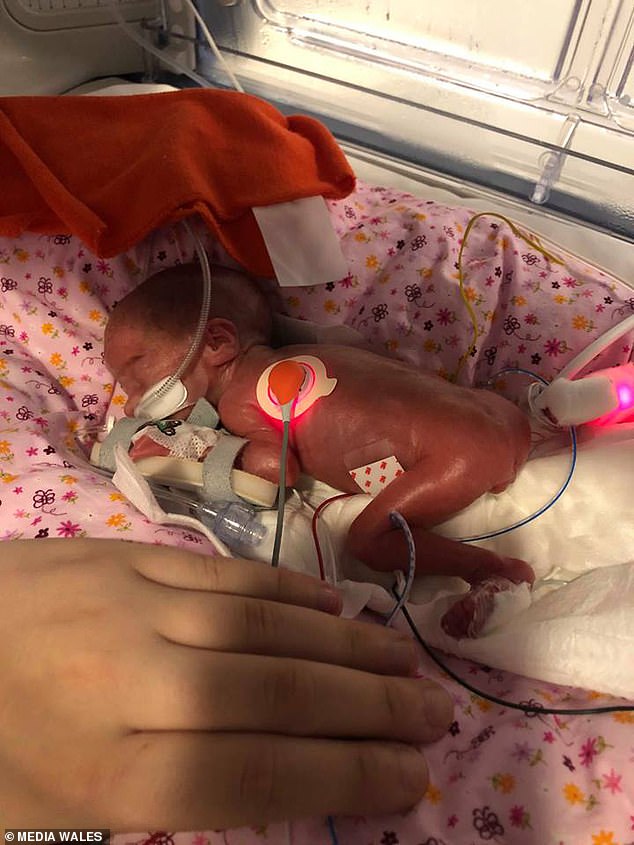 Robyn was eventually admitted to hospital at 27 weeks, but doctors told them that baby Hallie wasn’t ‘viable’.

However, it is rare for a baby weighing less than 500g to survive.

Robyn was taken back into hospital at 28 weeks – months before her actual due date on January 8. 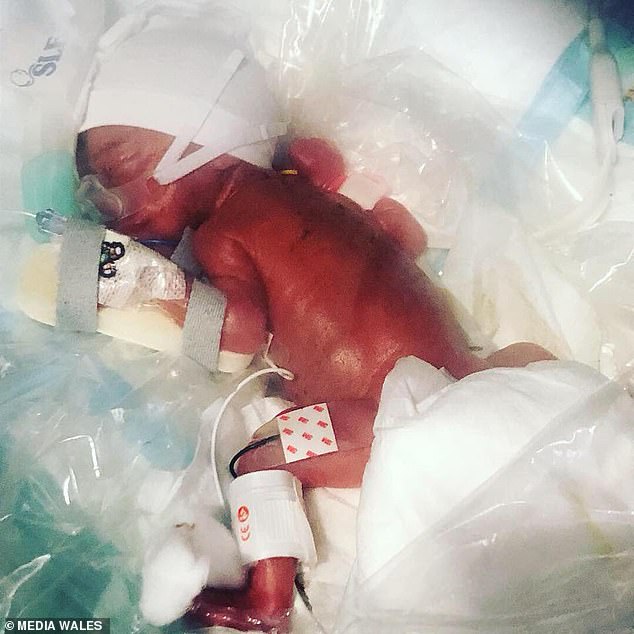 Mother Robyn said: ‘From 20 weeks, we were told almost weekly, that Hallie could pass away at any time. We were told not to expect a heartbeat at the next scan. But I was always positive. I had hope’

‘We were put onto a machine and monitors showed blips in Hallie’s heartbeat, so I was taken for an emergency caesarean,’ Robyn said.

It was after this that Hallie was born 11 weeks early.

‘There were loads of doctors and nurses, waiting to take her, in case she wasn’t breathing,’ Robyn said.

‘But, she proved everyone wrong – she came out screaming, crying, fighting and breathing on her own.

‘The placenta was the size of the palm of my hand and was grey and gritty – there was no bloody flow there. 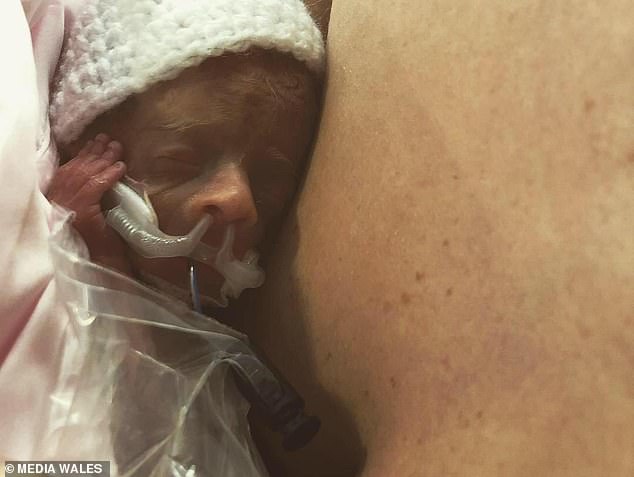 Robyn was admitted to hospital at 27 weeks, but doctors told them that baby Hallie wasn’t ‘viable’

‘That was the reason Hallie’s growth was restricted.

‘Everyone was blown away by her.

‘She’s tiny – around the same size as my iPhone.

‘I can’t even describe how happy I am. I wasn’t prepared to hear her crying and fighting, so when she did – I was so overwhelemed.’

Hallie is now being kept in a high-dependency unit at the University Hospital of Wales in Cardiff, while Robyn and James are staying in nearby accommodation provided by the Ronald McDonald charity. 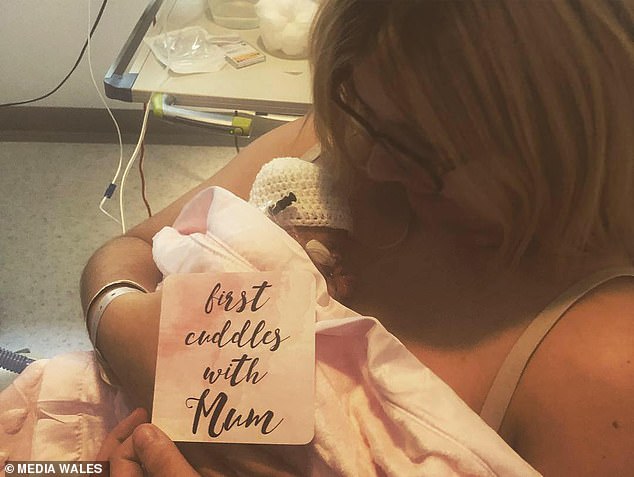 While Hallie gains strength, Robyn and James are staying in nearby accommodation provided by the Ronald McDonald charity

‘Hallie has settled in well up in NICU – being the smallest up there and she’s already showing them who is boss.

‘There is a long road ahead of her, being 11 weeks premature, but I have every faith in her she will overcome this bumpy road.’

Robyn is telling her story in a bid to raise awareness of premature births and to reassure women who may be going through similar experiences. 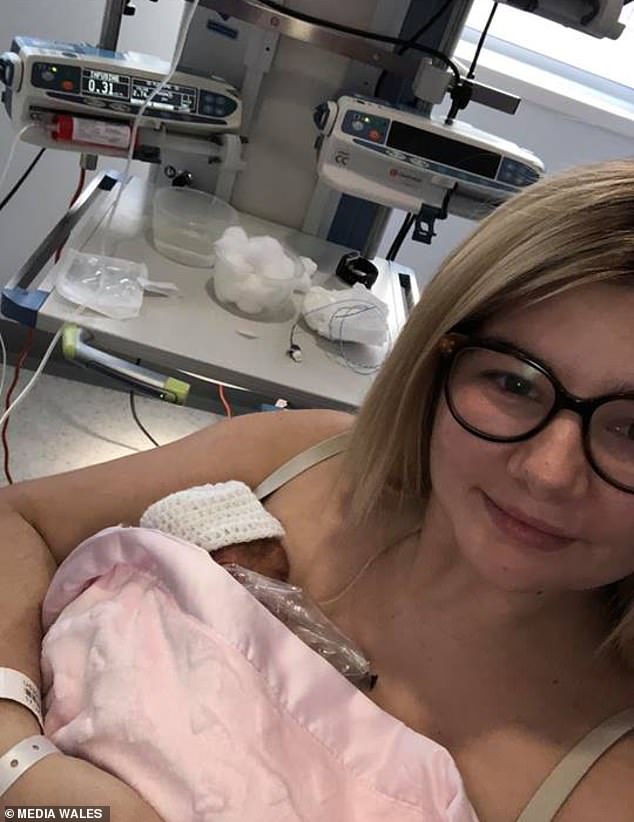 ‘When I was pregnant, I was literally researching everything. But, what I found most helpful is the amount of Facebook groups out there.

‘I was speaking to other mams who had been through similar experiences and it really helped me.

‘There was so much support there. Everyone had time for me.

‘I want to be able to give that back now, and if anyone wants to message me or talk then I would be up for that.’

Hypnotist tries to put under Jenna Bush Hager, Dylan Dreyer, and Al Roker on the Today show
Event with Senator Jeff Flake is relocated due to Kavanaugh protest
Pictured: Student, 22, who fell from Fordham University's clock tower at 3am
Israel Folau is SACKED
ALEXANDRA SHULMAN: Yes, the way to a woman's heart really is shopping!
PM does deal - now for 36 hours of frenetic phonecalls and promises to get it through the Commons
Boris Johnson faces first massive test of his Brexit deal
British motorbike maker Norton goes into administration over tax woes