His girlfriend Charlotte Crosby has expressed her desire for the duo to start a family.

But before becoming a dad himself, Josh Ritchie has uncle duties to fulfill and has finally been introduced to his older sister Michaela Wain’s newborn Grayson.

Baby Grayson is the first child to be born from BBC show The Apprentice, as Michaela is in a relationship with her co-star from the 2017 series, Harrison Jones. 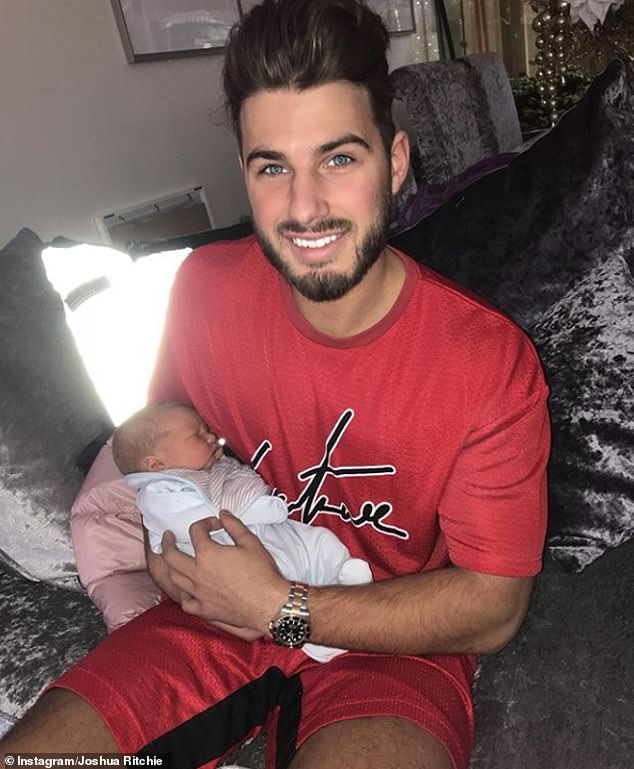 Taking to Instagram, Josh delighted fans with another look at the newborn as he posed with Grayson in his arms.

The reality star cut a casual figure in a red t-shirt and matching shorts, while little Grayson looked cute as a button in a white babygrow and striped bib.

Newborn Grayson looked tiny in Josh’s arms and clearly smitten already with the latest member to his family, the reality star gushed alongside his upload: ‘Been up to see the new nephew of the family this morning! Congrats to my sister @michaelawain1 and @harrisonjones89 on the new arrival.’

Fans were quick to send Josh and his sister Michaela their congratulations. 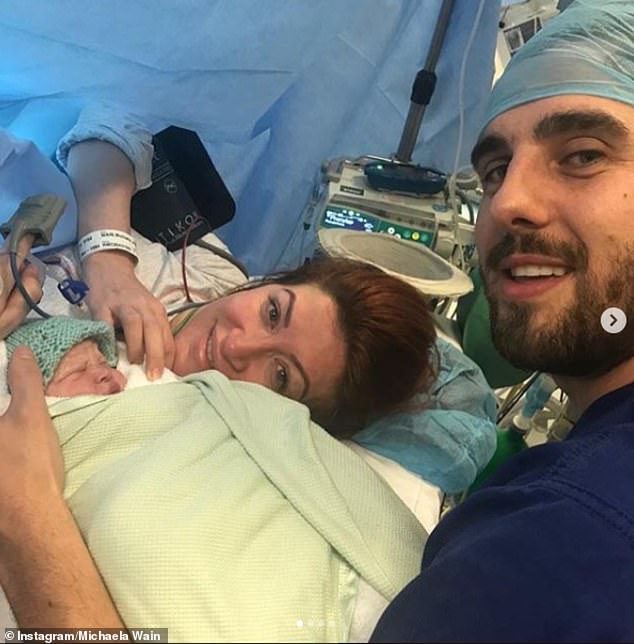 Baby joy! The first Apprentice baby has been born – former contestants Michaela and Harrison welcomed their newborn son on Tuesday

His post comes after Michaela and beau Harrison introduced their little man into the world following his birth on 23 October. The duo declared they are ‘absolutely in love’ with their baby, while Michaela praised her boyfriend for being the ‘best birthing partner ever’.

Michaela – who is already mum to son Harrison from a previous relationship – told fans it had been a ‘tough ride’, but she was ‘super happy’ to introduce her little man.

The reality star penned: ‘It’s been a tough ride but I’m super happy to say Grayson George Jones arrives 23/10/18 weighing 7lb2 and looking like a heart breaker. Absolutely in love.

‘And a huge big massive thank you to his amazing dad @harrisonjones89 who was the best birthing partner ever. Officially the most chilled guy on the planet.’ 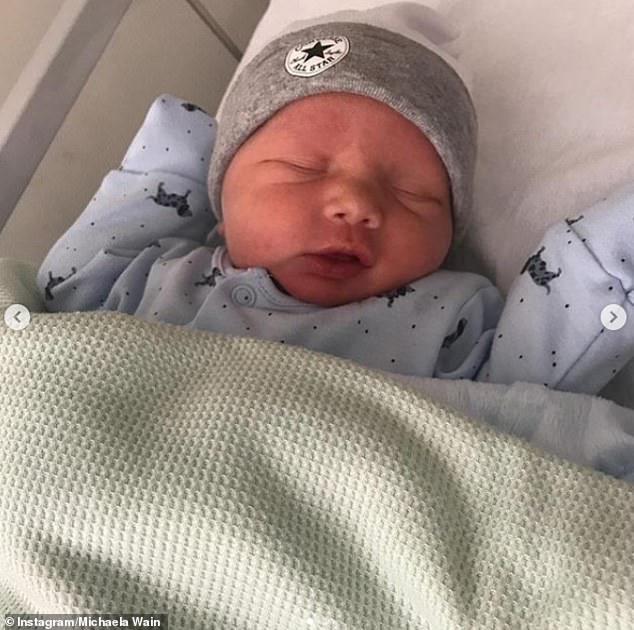 Cute: The former co-stars, who found love following the BBC show’s 2017 series, confirmed the arrival of their baby boy on Instagram , as they declared they are ‘absolutely in love’ 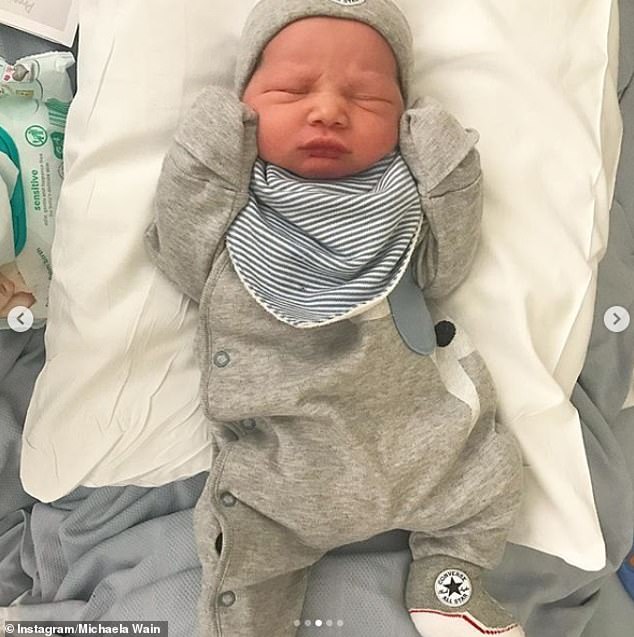 Proud mum: Michaela – who is already mum to son Harrison from a previous relationship – told fans it had been a ‘tough ride’, but she was ‘super happy’ to introduce her little man

Her first photo saw Michaela cradling her newborn in her arms while still in her hospital bed, as boyfriend Harrison cuddled up to the pair while kitted out in doctor’s scrubs.

In another image, baby Grayson is cute as a button in a mini Converse beanie hat and a printed babygrow.

New dad Harrison was just as delighted to introduce his son to the world and told followers: ‘Grayson George Edward Jones has arrived,’ he added a slew of heart-eyed emojis before revealing: ‘And on my mums 60th birthday too! What a present.’

He shared the a photo of himself holding Grayson over his shoulder.

Both Harrison and Michaela have been inundated with congratulatory messages from fans. 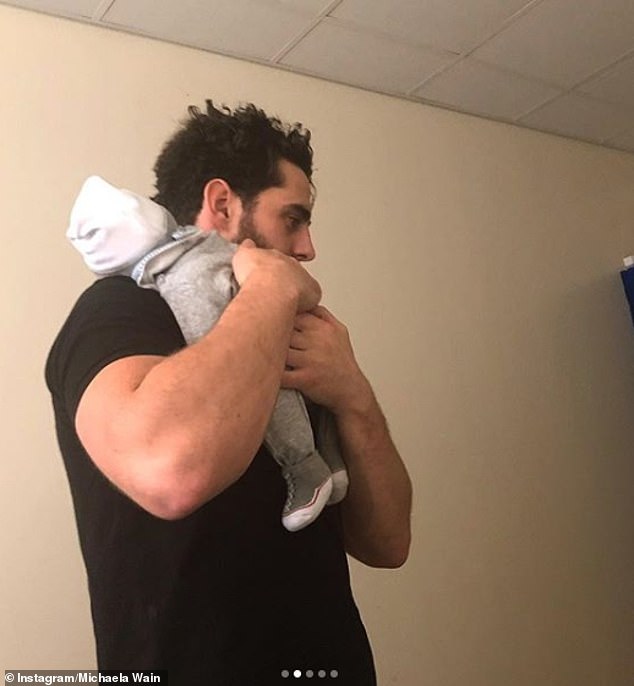 Smitten: New dad Harrison was just as delighted to introduce his son to the world and told followers: ‘Grayson George Edward Jones has arrived

Romance blossomed for the pair following their time together on The Apprentice last year. Michaela had finished in third place on the series, while Harrison was eliminated the week before in week ten.

The couple have since gone on to launch their own company within the construction industry.

News of their relationship first surfaced in January, with reports claiming the duo were forced to ‘keep their romance a secret for weeks’. 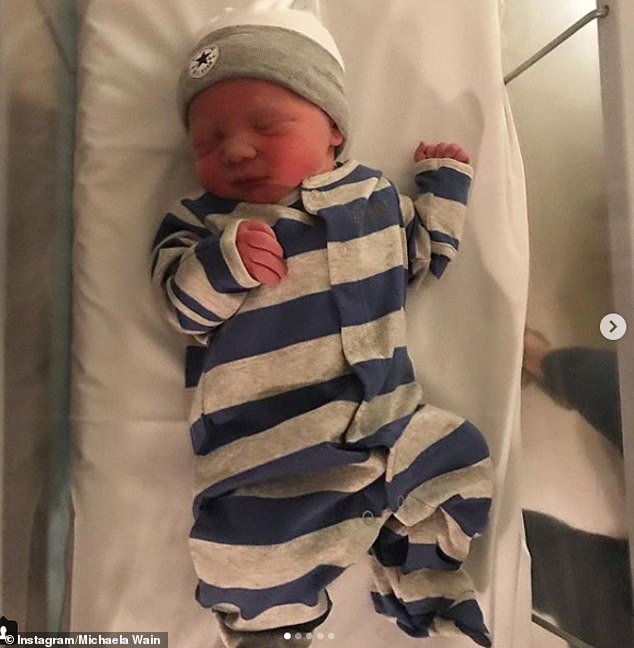 Sweet: Harrison revealed that little Grayson was born on his mother’s 60th birthday, adding: ‘What a present’ 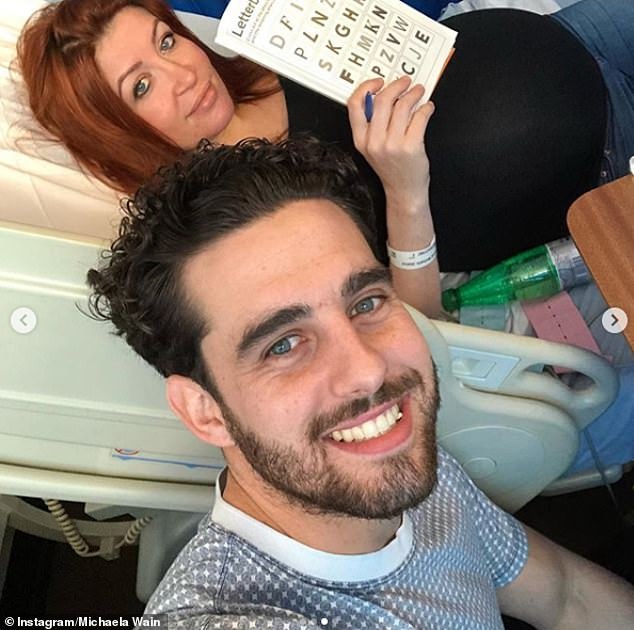 Offscreen love: Romance blossomed for the pair following their time together on The Apprentice last year – they have since launched a joint construction company

The Sun reported at the time: ‘There was always a connection between them but they tried to resist their urges during filming. They’re now in a fully-fledged relationship and have been spending a lot of time together.

‘Michaela was keen to publicly announce their romance but Harrison was more reserved about the idea. They are smitten with each other though.

The couple confirmed they were expecting a child together in June. Their baby news came after Michaela previously revealed she had suffered several miscarriages and call her son Harrison her ‘miracle child’.

Josh, meanwhile, is in a relationship with former Geordie Shore star Charlotte Crosby. 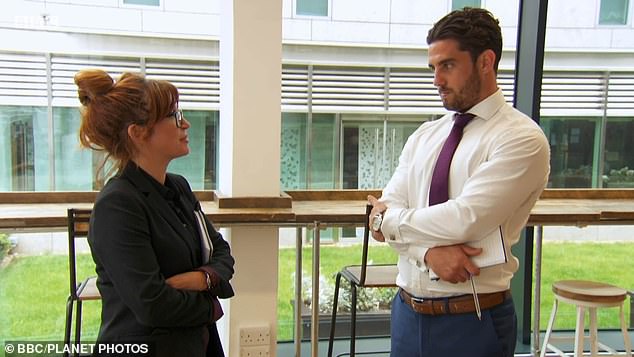 Lovely news! The couple – who went public with their romance in January – confirmed they were expecting a child together six months later

The duo got together shortly after Charlotte’s split from ex-boyfriend Stephen Bear and appear to be inseparable ever since.

Despite being faced with split claims recently, the duo appear to still be going strong and Charlotte has previously declared she would love to start a family with boyfriend Josh.

She told Closer magazine: ‘Having a family is one thing in life I really want – I’ve done so much with my life already, and becoming a mum is my dream.

‘I would love to start trying for a baby, next year. I don’t want to be an old mum. I want to be a young, cool mum.’ 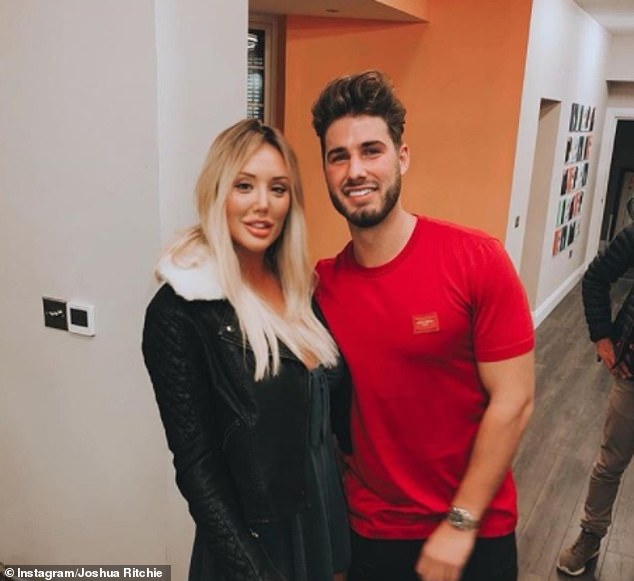