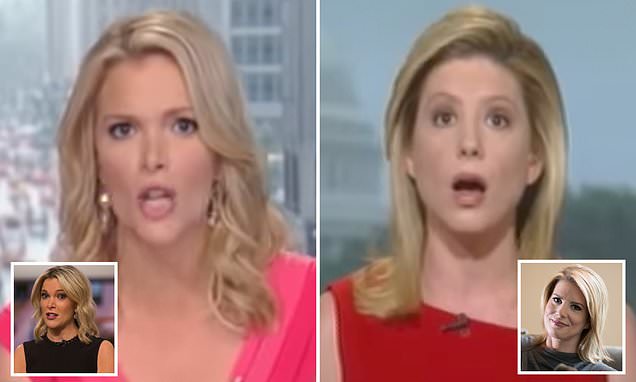 Axed NBC host Megyn Kelly has been branded a racist who made repeated racial comments by a frequent guest on her former Fox News show.

Kirsten Powers, who often sparred with Kelly on her former Fox News show, said NBC should not have hired the controversial host due to her attitude towards the big race issues in America.

Yesterday is was revealed Kelly was to be ousted from her NBC position just 48 hours after the host made remarks in which she defended the wearing of blackface during Halloween fancy dress on Today.

Recounting some of her most memorable confrontations with Kelly, she described how she attacked the New Black Panther Party in Philadelphia during the 2008 presidential election between and John McCain.

The group were accused of voter intimidation when a member was videoed by a Republican Party poll watcher standing outside a polling station holding a baton.

The incident was seized upon as an example of elections being ‘stolen’ but the man pictured was not charged and left the area when asked to by police.

On many occasions Powers claimed ex-LAPD cop Mark Fuhrman, who investigated the OJ Simpson case and was recorded using racist language, was brought on to analyze racial issues and police brutality cases.

Powers said: ‘The original sin was that Kelly was hired by NBC at all. Kelly had a long track record of racial demagoguery at Fox News before she ever set foot in the NBC studios.

‘NBC hired an unrepentant Kelly, who spoke with pride of all her work at Fox News.’

Powers added: ‘Kelly has made one racist claim after another: Jesus was white, Santa is white, a black teenager in a bathing suit pinned to the ground by a police officer was “no saint,” Sandra Bland would be alive if she had just complied with police orders.

‘Kelly dismissed a Department of Justice report finding racial bias in the police department at Ferguson, Missouri, arguing that “there are very few companies in America [where] you won’t find racist emails”.’

She added: ‘One of my craziest on-air experiences debating a conservative – a very high bar -involved Kelly yelling at me on live television for nearly 10 minutes for disagreeing that the “New Black Panthers” were a threat to Good People Everywhere.

‘In another instance, there was an off-air disagreement about her show using a caption referring to Michelle Obama as “Obama’s Baby Mama”.

‘Kelly was outraged when I told her it was racist, passing it off as a stupid joke by a junior staffer for which Fox News apologized. I didn’t get the joke.’

Kelly also ‘made one racist claim after another’, insisting Santa and Jesus were white on air.

‘Her meteoric rise could not have happened without the complicity of a system that is far too comfortable with racism, especially when it comes in a pretty white package.’

But despite the on-air argumentd, Powers said she ‘found her to be a smart and lively sparring partner during my time at Fox News’.

There are rumors Kelly may return to Fox News or its new online venture Fox Nation.

James Gargasoulas deemed fit to stand trial over Melbourne's Bourke Street rampage last year
A size 28 woman whose excess weight had been masking a growth, has shed nearly THIRTEEN stone
Michael Gove facing US travel ban as his cocaine confession is in breach visa rules
The Queen makes an appearance at the Cartier Polo Cup final in Windsor
US diplomat's wife claims immunity and flees UK after British teen was killed in car crash
Violent clashes in Barcelona following pro-independence march
Prodigy fans will queue up to buy 170 of singer Keith Flint's most treasured possessions
Tennessee murderer is executed by electric chair for killing a rapist inmate