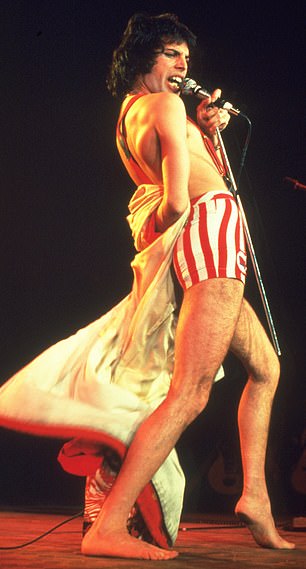 All hail Saint Freddie! The extravagant, operatic lead singer of Queen is portrayed as a sanitised superhero for the 21st century in the new biopic Bohemian Rhapsody.

At its laughable climax, we see Freddie Mercury finally fall in love and come out as gay to his parents, earning their tearful blessing — on the day his band achieves rock immortality with an all-conquering set at Live Aid.

Actor Rami Malek plays the exuberantly camp star, who died from Aids in 1991, as a misunderstood martyr to his own sexuality.

It’s a message cynically manufactured for today’s hyper-sensitive souls, so eager to take offence while simultaneously parading their virtue.

But Freddie Mercury was not virtuous. He was nobody’s martyr, and he didn’t care who he offended.

His shameless interviews would get him banned from every chat show, and he’d probably be under investigation for his sexual behaviour across half of Europe.

‘My sex drive is enormous,’ he announced. ‘I sleep with men, women, cats — you name it. I’ll go to bed with anything. My bed is so huge it can comfortably sleep six. I prefer my sex without any involvement.’

He was, he added, ‘just an old slag who gets up every morning, scratches his head and wonders who he wants to f*** today.’

Far from being, as the film depicts him, a crusader who strove to change the world’s attitudes to HIV, a sort of Lady Di in leathers, Freddie kept his Aids diagnosis a secret from the public until the day before he died, insisting to journalists that he had stopped performing because, since turning 40, he was too old to be ‘prancing about’ on stage. ‘It’s not illness, darling,’ he would say, ‘it’s just age.’

The movie has been scrupulously vetted by his Queen bandmates, Brian May and Roger Taylor, to ensure nothing soils his legend.

They started the process of canonising Freddie right after his death, with a celebratory concert featuring famous friends such as Elton John, George Michael, Liza Minnelli and David Bowie.

But the role of visionary figurehead and campaigner is one the singer never dreamed of and would not have recognised.

It is a travesty, all the more unfair because he was a deeply complex man whose feuds and contradictions could have fuelled a much more interesting film than Bohemian Rhapsody.

Freddie was a split personality, and knew it well. In his private life he was needy, selfish and insecure, swinging between mad generosity and vicious cruelty.

‘I can be very over-emotional. I seem to eat people up when they get too close and destroy them. There must be a destructive element in me because I try very hard to build up relationships but somehow I drive people away.’

When he performed, he said, he felt himself float out of his body and could look down at the strutting rock god who commanded the crowd’s adoration.

He told his biographer, Lesley-Ann Jones: ‘It’s like I’m looking down on myself and thinking, “f*** me, that’s hot!” ’

The chasm between these two sides of his character made him impossibly difficult, and he knew it: ‘I’m a man of extremes.’

Even the most forgiving of his friends, such as the woman he called his ‘common law wife’, Mary Austin, were repeatedly banished.

This set up a poisonous cycle of dumpings and pick-ups. ‘I spoil my lovers terribly,’ he moaned.

‘I like to make them happy and I get so much pleasure out of giving them wonderful, expensive presents, but then they end up treading all over me. That’s why I go out looking for someone who will love me, even if it’s just a one-night stand.’

When he declared a break from Queen in the early Eighties to record a solo album — tellingly titled Mr Bad Guy — he announced that he had even dispensed with his three live-in assistants.

After years of having an entourage at his beck and call, he preferred to be alone. To rub it in, he dedicated the album to his cat, Jerry, with the sign-off ‘Screw everybody else!’

Freddie arrived in Britain shortly after he left school, when his family had to flee his birthplace of Zanzibar — off the East African coast — amid political unrest.

They settled in Middlesex, where he began studying art at Ealing College and met two members of a covers band called Smile — Roger Taylor and Brian May.

Their first collaboration wasn’t musical: Freddie and Roger sold secondhand clothes and Victoriana on a stall in Kensington market, to help pay the rent on a flat they shared.

Freddie wanted to be a musician, but not in a covers band: he saw himself as a genius, like his hero Jimi Hendrix.

One college friend, Chris Smith, recalled: ‘The first time I heard Freddie sing, I was amazed. He had a huge voice. Although his piano style was very affected, very Mozart, he had a great touch.’

After stints in bands called Ibex, Wreckage and Sour Milk Sea, he joined forces with May and Taylor, and insisted on calling the band Queen. He also adopted his own stage name: Mercury.

His training as a graphic designer came in handy for their first two album covers, which featured a royal crest he created from the bands’ star signs: a crab for Brian (Cancer), two lions for Roger and bassist John Deacon (Leos), and a pair of fairies for Freddie himself (symbolising Virgo, he claimed).

But it was his knack for lyrics, not graphics, that was giving the band an edge beyond their hard rock sound. Their first chart single, Seven Seas Of Rhye, tapped into the Seventies fad for fantasy, with lyrics that might have been written by J.R.R. Tolkien after a spliff.

Queen’s first real hit was drenched in Mercury’s wicked wit: ‘Killer Queen is about a high-class call girl,’ he said. ‘I was trying to say that classy people can be whores as well . . . it’s one of those bowler hat, black suspender numbers.’ 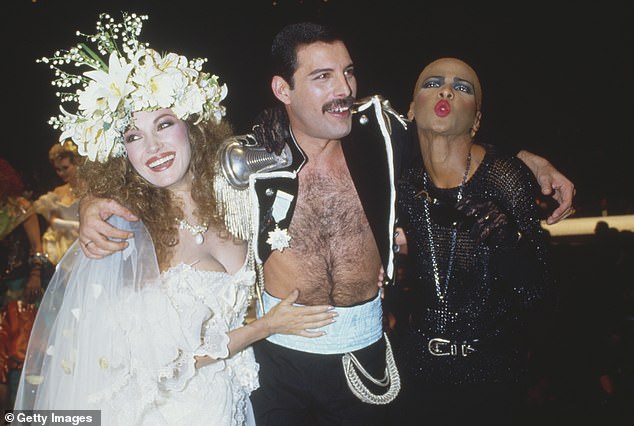 Mercury partying with actress Jane Seymour and a friend in 1985

The album A Night At The Opera followed in 1975, and by now Freddie’s desire for extremes was shaping the band’s sound.

They had already pioneered a many-layered guitar sound, and were so irritated that critics assumed they were using synths that their LP covers carried a declaration: ‘And nobody played synthesiser.’

On A Night At The Opera they went further, banishing session musicians.

‘Every molecule on that album is us,’ Freddie said.

It included a jibe at their ex-manager, entitled Death On Two Legs: ‘It’s a nasty little number which brings out my evil streak. I was a demon for a few days. The words came very easy to me. I wanted to make them as coarse as possible.’

It’s a far cry from the airbrushed image of Queen’s four-octave vocalist, mincing around the studio and firing off a few glib quips.

He famously addressed the Sex Pistols’ Sid Vicious as ‘Simon Ferocious’ but the truth is Freddie was a better punk than any of the Pistols. It’s just that he was so much more besides.

Nobody, though, could have called him a man of the people. His airy arrogance would see him beset with demands for apologies in today’s world of Twitter outrage.

After the anthemic We Are The Champions was adopted on the football terraces, Freddie claimed: ‘It was aimed at the masses — a participation song, something they could latch on to. It worked a treat. Of course, I’ve given it more theatrical subtlety than an ordinary football chant.’

His arrogance was stoked by shovelfuls of cocaine. Everyone knows the story of the launch party for Queen’s 1978 album Jazz, where dwarfs balancing silver platters streaked in coke on their heads mingled among the guests, who had only to bend over and snort a line as one of them passed by.

What is less well known is that Freddie once upset Michael Jackson, when the two were about to record together at his Los Angeles home in 1982, by tipping a mound of cocaine onto the coffee table and chopping it into lines.

To Freddie, this was as normal as rolling a cigarette.

None of this features in the anodyne movie. And the stilted script, which might have been written by a committee of chartered surveyors for all the life it has, contains no hint of Freddie’s devilish wit.

Asked many years ago by a journalist whether he’d ever settle down and raise a family, he retorted: ‘If I wanted children, I’d just go to Harrods and buy one. They sell anything there. Buy two and you get a nanny thrown in.’

His sense of mischief sometimes caused trouble too. In Rio in 1985, during a stadium gig that was being filmed for TV, Freddie’s costume during I Want To Break Free provoked the crowd to attack a cameraman.

The band had donned drag for the song’s video, so Freddie paraded on stage with a gigantic pair of fake breasts under his crop-top.

‘I don’t know why they got so excited about me dressing as a woman,’ said an unrepentant Freddie. ‘There were lots of transvestites in Rio — just go and look on any street corner. Anyway,’ he added, ‘I wasn’t giving up my boobs for anyone.’

His attitude to money would hardly win him Facebook friends today, either. When Queen first started getting radio airplay, a music reporter asked what he planned to do with his first million. The question baffled Freddie: ‘Spend it, dear,’ he shrugged.

That attitude never changed. He spent so liberally that his accountants despaired.

He and Elton John competed to be the most extravagant: ‘Elton had that problem where people were staying at his home at the weekends, in his spare rooms, and they’d look under the bed and there would be Rembrandts. With me, it’s my Japanese prints.’

Cartier, the New Bond Street jewellers, would open especially for him. ‘I could buy up the whole shop. Some days when I’m really fed up, I just want to lose myself in my money. I work up a storm and just spend and spend. Money can’t buy happiness, it’s true, but you can force yourself sometimes.’

Suffice to say, that is not a sentiment voiced in the movie during the Live Aid scenes.

As the band’s main songwriter, with Brian May, Freddie took more of the album royalties than the group’s other members.

And he enjoyed rubbing this in: ‘Of course we’re in it for the money and I’m not afraid to say that. I take most of it because I write all the hits. I make sure I get most of it, and I spend it.’

It’s not surprising that Freddie’s interviews were one of the major sources of friction in the band, nor that May and Taylor kept such a close grip on the movie script. They didn’t want dialogue like that.

In fact, they wanted a safe, disinfected, uncontroversial film — and they didn’t want the real Freddie Mercury anywhere near it.

Meghan Markle's Grenfell recipe tops Amazon's bestseller list
Journalist shares videos of deserted Paradise and captures how some streets were devastated
Civil rights attorney forced to apologize for saying BLACK radio host has 'white privilege'
Trump walked away from North Korea deal because he 'didn't want to make the same mistakes Obama'
Brand creates two glam makeup looks - and one has $596 of products and the other only has $99
Prince Charles 'furious' as Harry rift casts a shadow over his work
Donald and Melania Trump met by Queen at Buckingham Palace
Woman, 85, 'shoots her roommate and kills another in a domestic violence dispute at their home'