Harry, in his Blues & Royals tropical dress uniform, medals and sword, laid a wreath with the handwritten message: ‘In grateful memory of those who made the ultimate sacrifice in the service of their country.’

He saluted as the last post was sounded and the Fijian flag lowered. 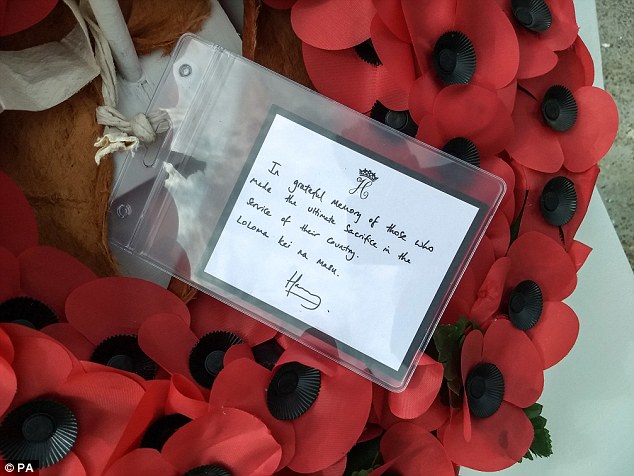 Prince Harry wrote: ‘In grateful memory of those who made the ultimate sacrifice in the service of their country. Loloma kei na masu. Harry’ 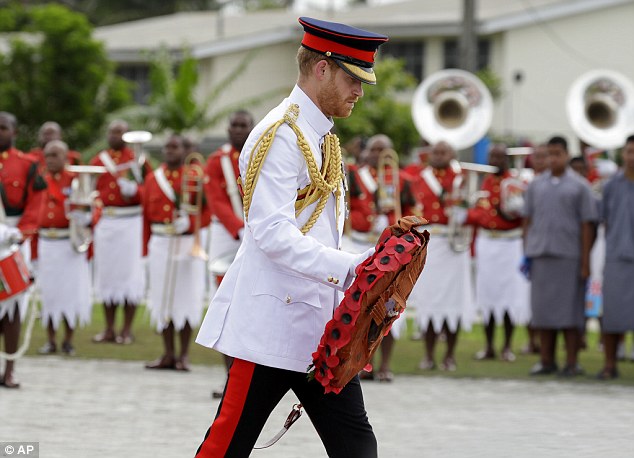 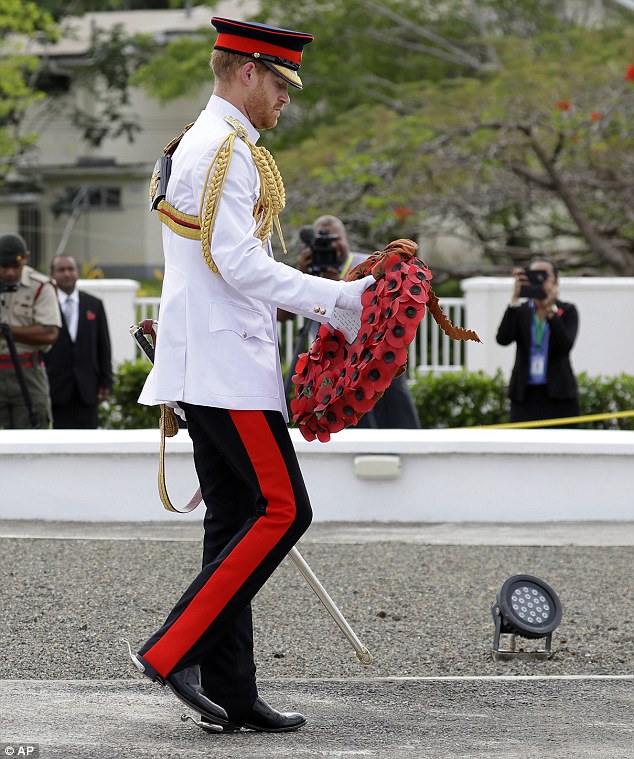 The poppy wreath held by the Duke of Sussex carried a personal handwritten message, in both English and Fijian 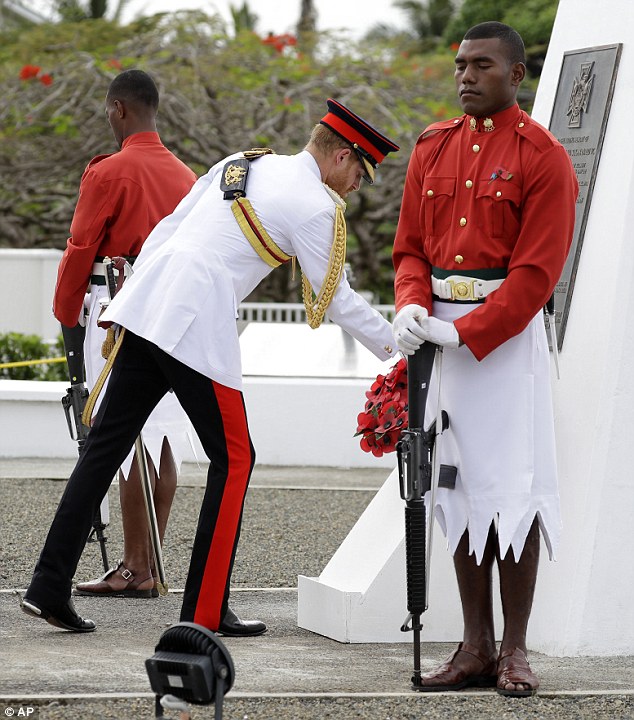 The prince, who served in the British Army for ten years, then met Fijian war veterans, some of whom served with the British military.

There are more than 1250 Fijians currently serving in the British army and Harry’s Fijian orderly is also ex British forces.

After Harry had laid the wreath – including the Fijian ‘loloma kei na masu’ which roughly translates as ‘love and blessings’ – he was introduced to a line-up of veterans.

Harry shook each man by the hand as he walked along the line and had a joke with one senior veteran.

Afterwards Maleli said: ‘I served for 40 years in the medical corps, I was a pathologist. ‘It was very nice to meet Prince Harry today.

‘He is a very good role model for us all. The British royals family are very popular here as Fiji was ceded to Great Britain and they taught us good things.’

As Harry progressed down the line of veterans, he sounded very like his father Charles and grandfather Philip. ‘Very nice to see you today’ he told each man.

‘Did you enjoy your service? How are you today?’ Then he came to 12-year-old Taniela Vakalaca who was wearing all his father’s medals as his dad died in Kenya two years ago.

Harry asked him: ‘Who’s are these medals… your father’s…? Ah… Are you going to join the army? You don’t have to! Only if you want to!’

Harry pulled his mum out of the crowd to shake her hand and told her how nice it was to meet her.

Afterwards a rather shy Taniela said: ‘It was very nice to meet him [Harry]. ‘My medals are my dads. ‘He passed away in 2016 in Kenya, in Africa. I miss him very much and I want to follow my dad.’ 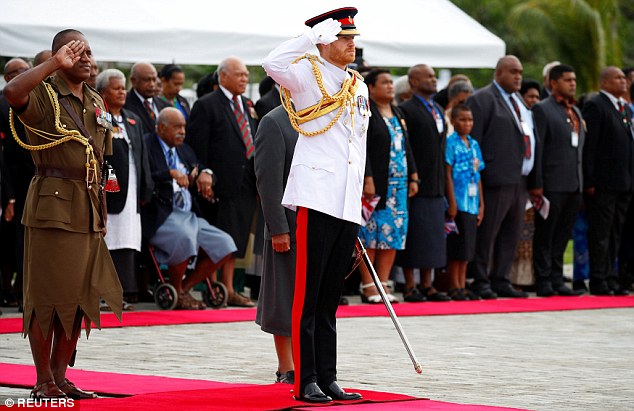 The Duke of Sussex salutes during the wreath laying ceremony at the war memorial in Suva, Fiji 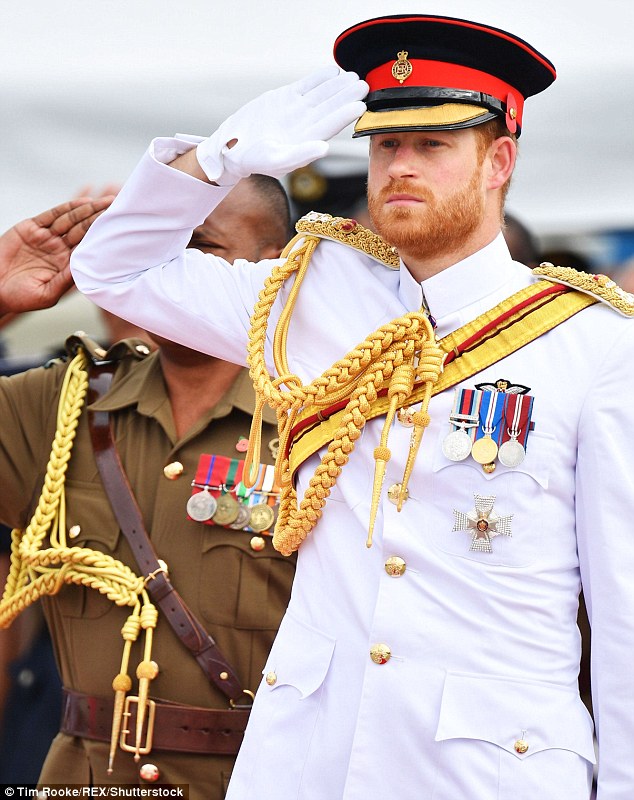 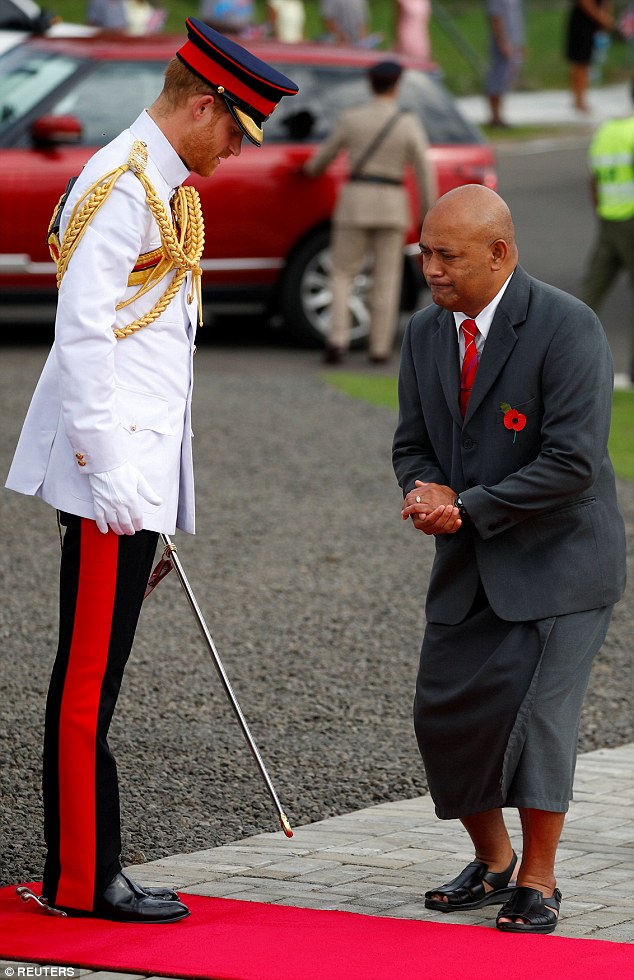 Harry then spotted a friend. Brit Derek Detenalagi knew the prince from the inaugural Invictus Games in London in 2014. He and his wife Ana, whose family are from Fiji, flew over specially for the royal visit and were invited to last night’s state dinner.

When Harry spotted the couple he teased them: ‘Late night last night? Look after yourselves!’ Ana said: ‘We weren’t on the list this morning for this wreath-laying but his PA Clara told us to be here this morning.

‘We were at the reception last night which was fun ‘We were very honoured as he gave us each a hug.

‘We did have quite a late night but Harry didn’t. He and Meghan left with the president.’

Later, Harry and Meghan got into the island spirit in brightly-coloured outfits as they embarked on a morning of engagements in Fiji.

The couple arrived at the University of the South Pacific campus in Suva, to mark the university’s 50th anniversary.

Meghan, 37, was wearing a bright blue and pink tiered dress by Figue and Harry in a blue tropical print shirt

The couple were greeted by pipe playing musicians and cheering crowds as they walked up the red carpet before Meghan said a few words. 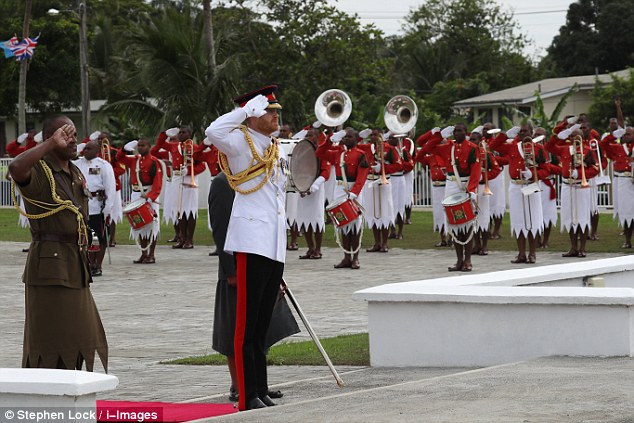