A ‘shocking’ discovery in Pompeii has found the undisturbed skeletons of five people who took refuge from the eruption of Mount Vesuvius in A.D.79.

It is believe the five, two women and three children, sought safety in a small room – but were either crushed when the roof caved in or burned.

The house where they were found has revealed a string of discoveries in recent weeks – from stunning murals to an inscription that revealed the eruption was earlier than thought. 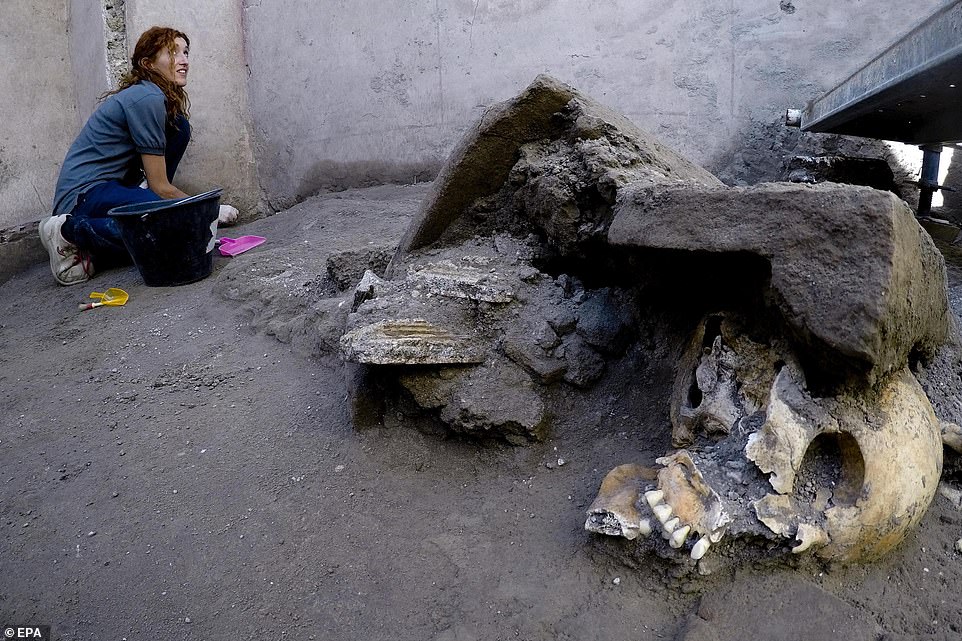 The remains of five people, probably two women and three children, were found in a during excavations in Pompeii, Italy, 24 October 2018. The group probably took refuge in the bedroom in a desperate attempt to escape a shower of volcanic rocks that had filled the house

The director of the Pompeii archaeological site, Massimo Osanna, called it ‘a shocking find, but also very important for history.’

He told ANSA on Wednesday the skeletons were still intact, having been left undisturbed despite looting at the site centuries ago.

The bones – believed to be those of two women and three children – were discovered inside a house holding a charcoal inscription that historians say dates the deadly eruption to October, two months later than previously thought.

Archaeologists think the people sought safety in a small room but were either crushed when the roof caved in or burned. 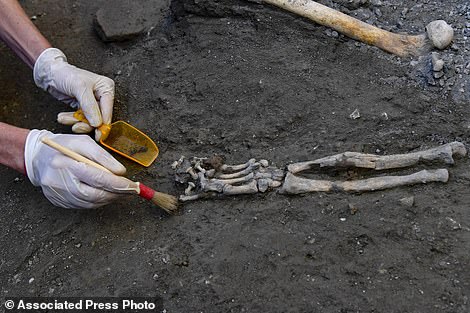 The Italian news agency ANSA says new excavations in the ancient buried city of Pompeii have yielded the undisturbed skeletons of people who had taken refuge from the eruption of Mount Vesuvius in A.D.79 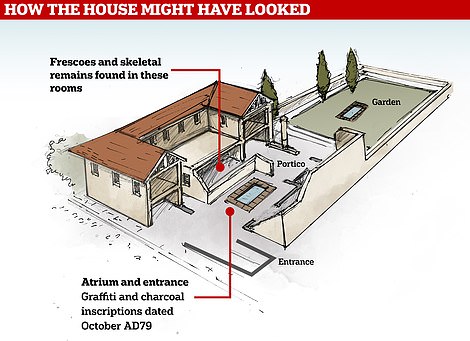 The house the skeletons were found in. Parts of it wereapparently being renovated just before the nearby Mount Vesuvius erupted

It is the latest in a string of finds at the site.

Historians have traditionally dated the disaster to Aug. 24 79 AD, but excavations on the vast site in southern Italy have unearthed a charcoal inscription written on a wall that includes a date which corresponds to Oct. 17.

The writing came from an area in a house that was apparently being renovated just before the nearby Mount Vesuvius erupted, burying Pompeii under a thick blanket of ash and rock.

‘Being charcoal, fragile and evanescent, which could not last a long time, it is more than likely that it was written in October 79 AD,’ said Massimo Osanna, head of the Pompeii site.

While not listing a year, the graffiti reads: ‘XVI K Nov,’ meaning the 16th day before the calends of November, or October 17 in the modern calendar. 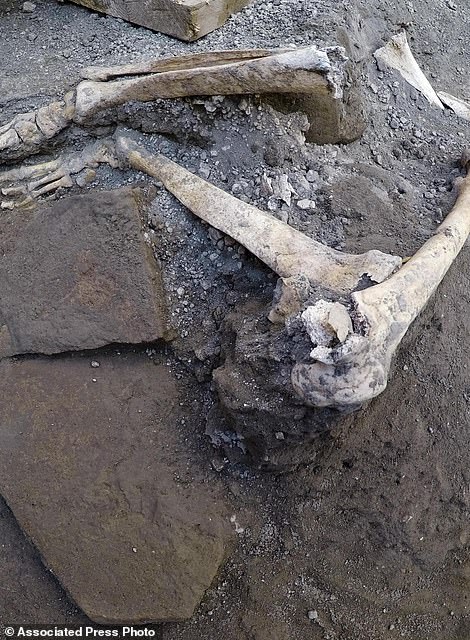 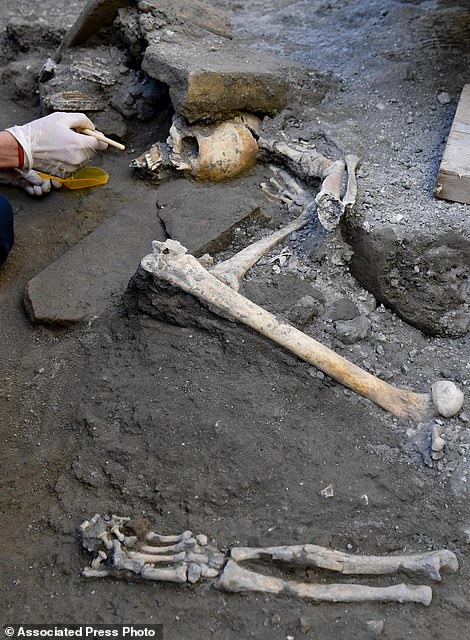 An archaeologist inspects skeletons in the Pompeii archaeological site 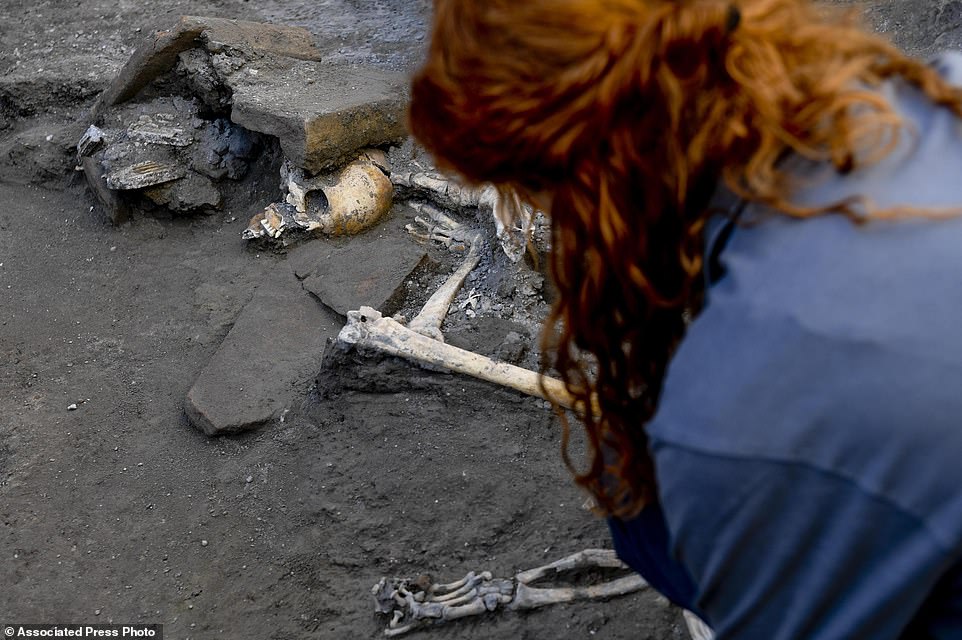 An archaeologist inspects skeletons in the Pompeii archaeological site, Italy, Wednesday, Oct. 24, 2018. The Italian news agency ANSA says new excavations in the ancient buried city of Pompeii have yielded the undisturbed skeletons of people who had taken refuge from the eruption of Mount Vesuvius in A.D.79. The director of the Pompeii archaeological site, Massimo Osanna, told ANSA on Wednesday the skeletons, believed to be two women and three children, were still intact, having been left undisturbed despite looting at the site centuries ago.

Archaeologists found the inscription in a house that was in the process of being renovated at the time of the eruption, so the writing would have probably been covered with plaster shortly.

‘That could help explain why, next to rooms with frescoed walls and ceilings, and with cemented floors — in some cases with tiles or marble slabs – there were some areas with plastered walls or even without floors, like the atrium and the entrance corridor,’ archaeologists said.

The Aug. 24 date derives from an account of the blast given by Pliny the Younger, who witnessed the eruption and wrote about it almost 30 years after the event in two letters to his friend, the Roman historian Tacitus. 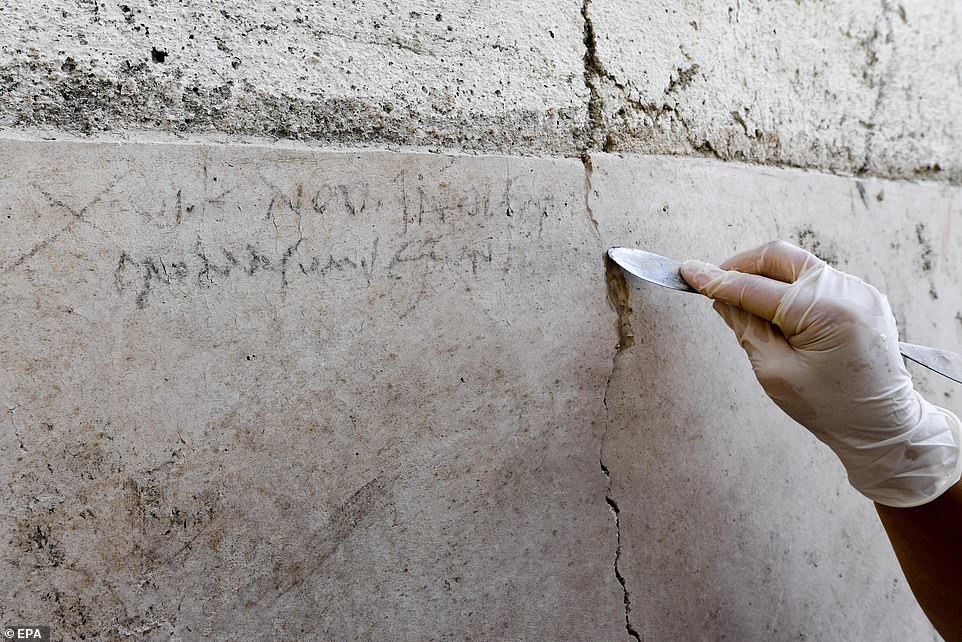 The inscription on a wall of the excavations of Pompeii, (Naples), 16 October 2018. A charcoal inscription uncovered during new excavations at Pompeii backs the theory that the Mount Vesuvius eruption that destroyed the ancient Roman city took place in October of 79 AD, not August

However, previous excavations have uncovered a calcified branch bearing berries that normally only come out in autumn.

The discovery of some braziers over the years also suggested the disaster did not strike at the height of summer.

Osanna suggested the correct date might have been Oct. 24. 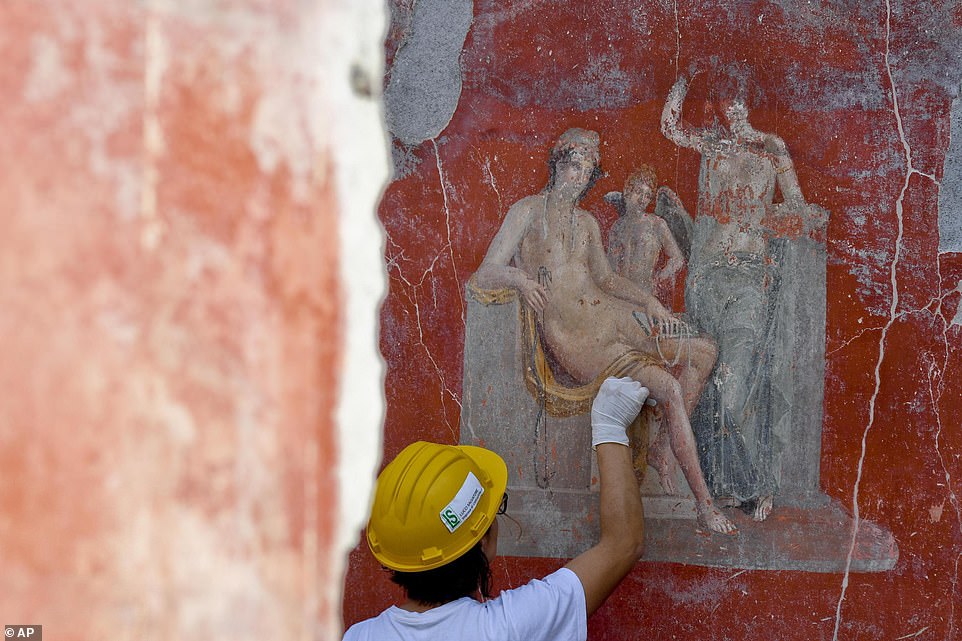 An archaeologist works on a picture of the ‘Villa del Giardino’ during new excavations at Pompeii archaeological site, Italy, Tuesday, Archeologists have found writings proving that the famous 79 AD eruption happened two months later than what the scientific community currently believes.

‘It is highly probable that it can be dated to the October of AD 79, and more precisely to a week prior to the great catastrophe, which according to this hypothesis occurred on the 24th October,’ the archeology team said in a statement.

Showing off the faint writing on an uncovered white wall, Culture Minister Alberto Bonisoli hailed it as an ‘extraordinary discovery’.

‘Today, with a lot of humility, maybe we’re rewriting the history books because we’re dating the eruption to the second half of October,’ Bonisoli said.

WHAT DO WE KNOW ABOUT VESUVIUS AND THE DESTRUCTION OF POMPEII?

Mount Vesuvius erupted in the year AD 79, burying the cities of Pompeii, Oplontis, and Stabiae under ashes and rock fragments, and the city of Herculaneum under a mudflow.

Mount Vesuvius, on the west coast of Italy, is the only active volcano in continental Europe and is thought to be one of the most dangerous volcanoes in the world.

Every single resident died instantly when the southern Italian town was hit by a 500°C pyroclastic hot surge.

Pyroclastic flows are a dense collection of hot gas and volcanic materials that flow down the side of an erupting volcano at high speed.

They are more dangerous than lava because they travel faster, at speeds of around 450mph (700 km/h), and at temperatures of 1,000°C.

An administrator and poet called Pliny the younger watched the disaster unfold from a distance.

Letters describing what he saw were found in the 16th century.

His writing suggests that the eruption caught the residents of Pompeii unaware.

Mount Vesuvius erupted in the year AD 79, burying the cities of Pompeii, Oplontis, and Stabiae under ashes and rock fragments, and the city of Herculaneum under a mudflow

He said that a column of smoke ‘like an umbrella pine’ rose from the volcano and made the towns around it as black as night.

People ran for their lives with torches, screaming and some wept as rain of ash and pumice fell for several hours.

While the eruption lasted for around 24 hours, the first pyroclastic surges began at midnight, causing the volcano’s column to collapse.

An avalanche of hot ash, rock and poisonous gas rushed down the side of the volcano at 124mph (199kph), burying victims and remnants of everyday life.

Hundreds of refugees sheltering in the vaulted arcades at the seaside in Herculaneum, clutching their jewellery and money, were killed instantly.

As people fled Pompeii or hid in their homes, their bodies were covered by blankets of the surge.

While Pliny did not estimate how many people died, the event was said to be ‘exceptional’ and the number of deaths is thought to exceed 10,000.

What have they found?

This event ended the life of the cities but at the same time preserved them until rediscovery by archaeologists nearly 1700 years later.

The excavation of Pompeii, the industrial hub of the region and Herculaneum, a small beach resort, has given unparalleled insight into Roman life.

Archaeologists are continually uncovering more from the ash-covered city.

In May archaeologists uncovered an alleyway of grand houses, with balconies left mostly intact and still in their original hues.

A plaster cast of a dog, from the House of Orpheus, Pompeii, AD 79. Around 30,000 people are believed to have died in the chaos, with bodies still being discovered to this day

Some of the balconies even had amphorae – the conical-shaped terra cotta vases that were used to hold wine and oil in ancient Roman times.

The discovery has been hailed as a ‘complete novelty’ – and the Italian Culture Ministry hopes they can be restored and opened to the public.

Upper stores have seldom been found among the ruins of the ancient town, which was destroyed by an eruption of Vesuvius volcano and buried under up to six metres of ash and volcanic rubble.

Around 30,000 people are believed to have died in the chaos, with bodies still being discovered to this day.

Rose Bryant-Smith and Grevis Beard share 5 steps to take care of poisonous colleagues
Football fan, 85, shows off his freestyle moves on the streets of a Peruvian city
William reveals Prince George has inherited Diana's love of dancing
Mel Gibson's new film 'Rothchild' sparks huge backlash
Trump says 'everyone is very excited' about his new deal with Mexico as he agrees to suspend tariffs
Kansas teen, 15, survives after falling on a 10-inch knife which impaled his face and skull
'Dank Vapes' used by over 50% of sick vapers may be driving the US lung illness epidemic
Meghan Markle is seen happily greeting mother Doria and father Thomas in school video