A couple claim their ‘cheeky week away’ ended up costing £10,000 because bed bugs followed them home from a TUI hotel and infested their house.

Tanya Woodgate, 46, and partner Richard Williams, 42, believe they crawled into their suitcases following their £1,300 break to Crete in August.

The couple are now forced to sit on deck chairs in their living room after having to get rid of their two sofas overrun with the creatures who bit their dogs.

But despite removing the sofas from their home, the pests spread to their bed and more than £1,000 worth of delicate clothes stored underneath had to be destroyed. 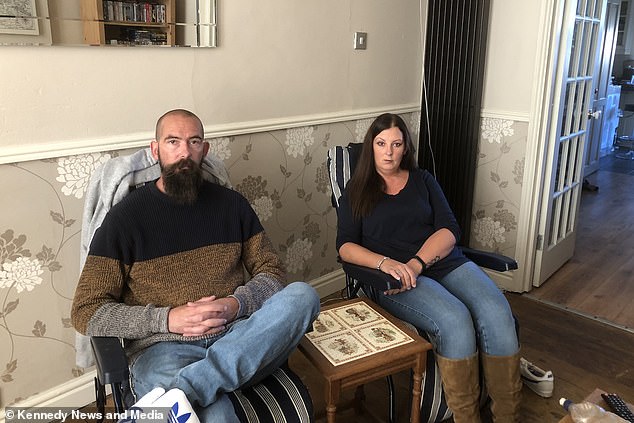 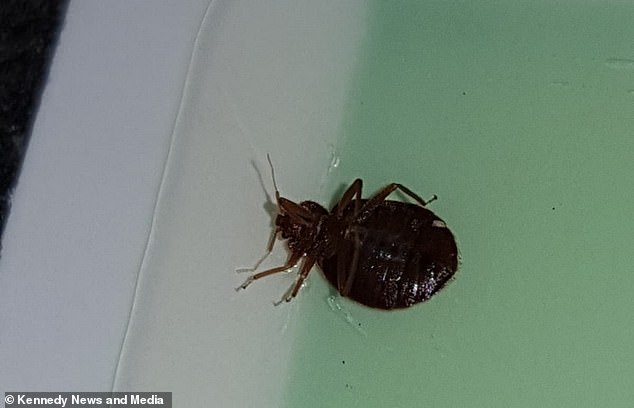 The couple say that the bed bugs (pictured, one found in their home) climbed into their luggae on the way home from the Greek island

Mr Williams allegedly spotted the bugs in their hotel bed but didn’t realise what they were and didn’t connect them to bites that appeared on their legs during their stay.

Ms Woodgate, whose osteoarthritis sometimes leaves her unable to walk, must spend months sitting on a deck chair at home while they save to replace furniture.

She claims she can no longer sleep comfortably as she is plagued by nightmares of bugs after forking over more than £3,100 to purge the pests from her home in Barnstaple, North Devon. 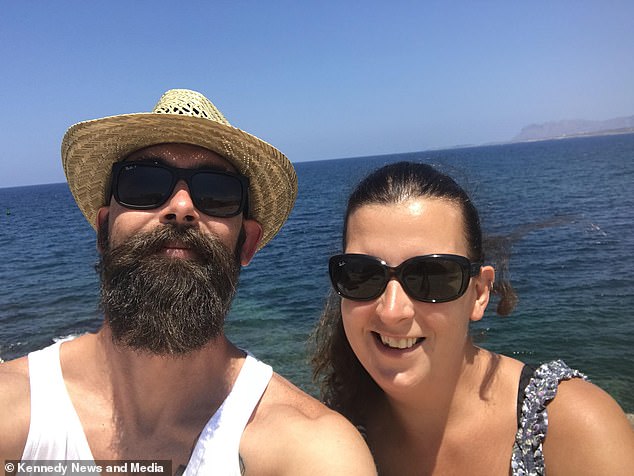 The couple (pictured on their holiday in Crete) have had to throw out more than £1,000 in delicate clothing 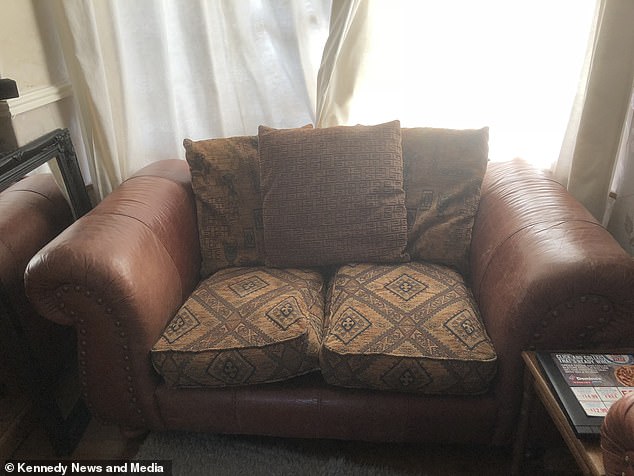 As well as throwing out clothing, the holidaymakers have had to scrap two sofas and now have no furniture to sit on other than deck chairs

‘I wish we’d never gone to Crete now,’ she said. ‘A cheeky week away has cost us £3,100 just to get rid of the bugs and at least another £4,000 for the sofas, not to mention the clothing and everything else. The bugs have even bitten our dogs.

‘It’s just been one thing after another and these bed bugs are going to haunt us forever, I’m sure of it.

‘My partner and I had no idea bed bugs were still a thing – we thought they were an old wives tale. It wasn’t even a thought in our head to be honest. 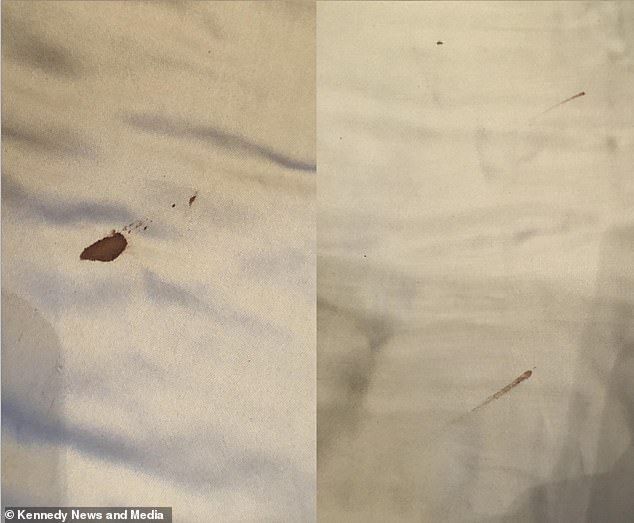 ‘We were bitten a few times in our hotel room but because it was a hot climate we just put it down to mosquitos.

‘It was only meant to be a cheeky week for a break because we both work really hard. Because it was only a week, I decided to use the single bed for all my stuff.

‘I just laid my clothes out on the single bed. Now I know that was the biggest mistake.

‘One of our sofas was a four-seater, and we dumped the suitcases on the sofa when we got home.

‘We just dumped everything on the sofas in the living room and flopped on the sofa and ended up falling asleep.

‘We’d noticed bites on us after about two to three weeks. Every time we sat on the sofa we were being bitten.

‘My partner and I were just wearing shorts and t-shirts in the house because it was so hot and we noticed that all our exposed skin was being bitten.

‘Because we live by a river I said they must be gnat bites or something. We checked the dogs to make sure there were no fleas in the house and they hadn’t had anything.

‘One of my dogs is severely allergic to flea saliva so we’d know pretty quickly if they had fleas, but we still checked to be sure.

‘After about four weeks, we were sitting on the sofa and this little bug crawled up the cushions.

‘My partner grabbed hold of it and he flicked it outside. Not half an hour later a larger one, it was the same shape but larger, crawled up the cushion. He flicked that one outside too.

‘The following Sunday we went to the kitchen and he had a long sleeved top on and I noticed these two bugs crawling on his sleeve.

‘They were so tiny but they were moving so quickly. We put them in a glass of water and took a photo and I said, I don’t know what that is.

‘With that I’m sitting on the sofa and I googled crawling insects in sofa and the first thing that came up is “bed bugs”.

‘They have a five life cycle where they shed their skin, feed, shed their skin, and get bigger and bigger with each stage. They looked like what we’d caught, but we’d found them on our sofa – not our bed.

‘They can crawl into your furniture from wherever and we’d put our suitcases on the sofa when we got home.’ 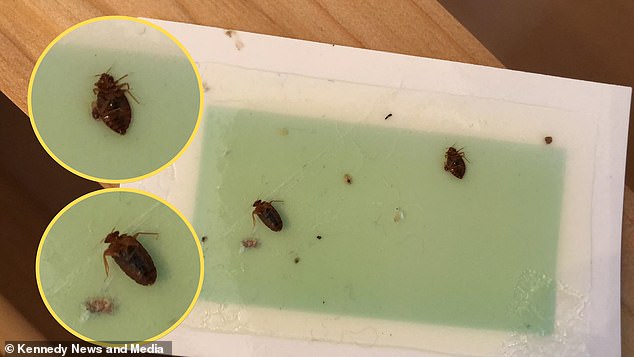 Ms Woodgate, who says she cannot stand insects, called out an exterminator who confirmed the creepy crawlies were bed bugs.

After removing their sofa from their home, the dog trainer was horrified when she discovered the bugs had been transported up to their bed and the clothes stored in the drawers beneath it.

‘It was an absolute nightmare,’ she said. ‘It was horrible. I remember it vividly. After we got rid of the sofa, we weren’t bitten for about four days. It was a Monday morning, and I was just making the bed.

‘I flipped a pillow over and there was this tiny little thing crawling under the pillow. I grabbed one of the strips and caught it. It was no bigger than the head of a pin.

‘I thought, that can’t be a bed bug – it’s really tiny. But I pulled open one of the drawers [under the bed] and there it is – an exoskeleton of a bed bug. I thought – oh no, oh no, oh please god no.

‘I pulled out all the drawers and under the head end on Rich’s side I unfolded a pair of jeans and there were bed bugs of various different life cycles crawling around.

‘I screamed. I had a panic attack. They were in our bed now. I flipped the bed up, and it’s crawling in bed bugs.

‘It’s covered in blood stains where they’ve had a feed and they’ve pooed. I phoned up the Rentokil man in floods of tears and told him they were in our bed now. I didn’t know what to do.

‘You need at least 60 degree celsius heat to kill them, so I had to get rid of loads of clothing that would have been destroyed at that temperature.

‘I threw away five pairs of Levi’s jeans, all of Rich’s wet weather gear because it would have melted at that temperature. It was heartbreaking.

‘I will be getting rid of the bed. Even though the bugs are dead, there’s still bug poo on our £1,500 mattress so once we’ve got some money together we will be replacing that mattress.

‘Even now I know they’re all dead, in the middle of the night if I wake up with an itch I’m paranoid it’s a bed bug crawling on me.

‘I’m still having nightmares now about bed bugs taking over my entire house and wading through bugs. It’s just horrible. I haven’t slept properly for weeks and weeks with the stress of it all.’

She filed a formal complaint with TUI but was furious when they allegedly dismissed the bed bug claims as ‘impossible to eradicate altogether’ due to the hot climate.

The couple complained again and Ms Woodgate was told she may now face a six-month wait to hear if she will receive any compensation.

Now whenever she and Mr Williams go away, she plans to take a bed bug identifying kit with her for fear of encountering them again.

‘I can’t imagine what our house would be like now if I hadn’t found the bed bugs,’ she said.

‘I know TUI are a big company but we have two more holidays booked with them and I’m a little concerned that should we need to complain for any aspect, are we going to be taken seriously and fairly?

‘Apparently it’s more and more common now for bed bugs to turn up in your home because travel is so cheap. They travel home in your luggage and you just don’t know they’re there.

‘You could have bought one, two, maybe three bugs back with you and not know it. A sexually mature female can lay 500 eggs in her lifetime. That’s how fast they can multiply.

‘I just want people to educate themselves on the bugs. Know the signs. Pull the bed to pieces. Lift the mattress up. Check the bed frame out and the seams.

‘If you find them in your hotel room, take photos. Get your rep to come and have a look.’

A spokesman for TUI UK said: ‘We’re sorry to learn of Miss Woodgate’s experience and will be in contact with her to discuss it shortly.

‘We’d like to reassure customers that we regularly audit all of the hotel we feature in respect of health and safety, including hygiene.’

The hotel denied that there was any bed bug issue and claimed that they were unaware of the complaint.

Million Greenback Itemizing's Ryan Serhant flaunts his sculpted chest throughout trip with spouse in...
Roxanne Pallett threatens to QUIT ghost hunting show as she screams her way through séance
Alexa Chung, 34, admits she 'worries about the future'
John Bercow admits he has 'bullied' MPs by mimicking their accents
This Brexit deal isn't perfect but we WILL take control of our borders, writes JEREMY HUNT
'I was a brat': Geri Halliwell says sorry for leaving Spice Girls
UK's biggest forensic services firm pays ransom to criminals after hack
Furious customers brand Whirlpool UK 'the biggest disgrace ever'