She’s known to work up a sweat at any given day of the week.

And Sunday proved no different for Sarah Hyland, 27, who was spotted leaving a gym in Los Angeles in the late hours of the afternoon.

The Modern Family actress flaunted her toned figure in a green crop top and a pair of sparkly star printed leggings while holding on to a Women’s March sweater during the outing. 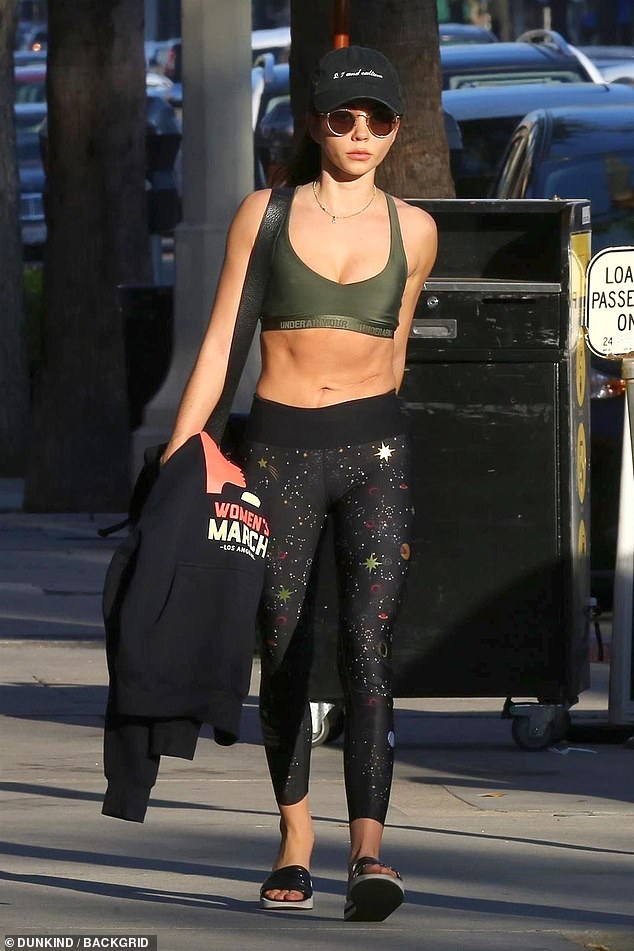 Looking fit: Sarah Hyland flaunted her toned midriff as she left a gym in Los Angeles on Sunday

Hyland made an interesting choice of wear by sporting a pair of flip-flops while accessorizing her attire with the help of a messenger bag and retro sunglasses.

In what appeared to be an attempt to go incognito, the 27-year-old had also added a black hat to her ensemble as she returned to her car.

Hyland’s reasons for consistently working out does not just stem to the tune of wanting to look good, though. 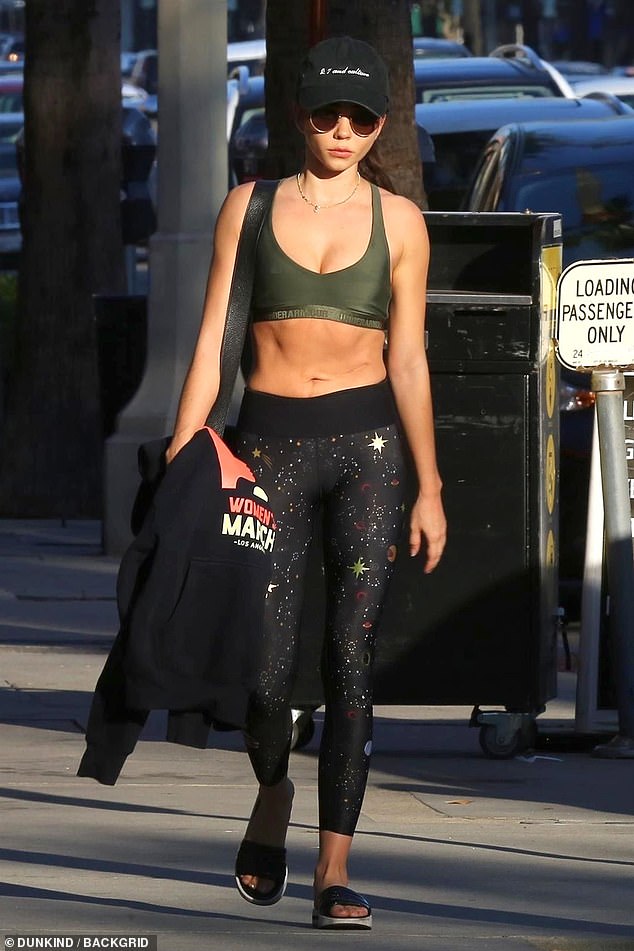 She looks fantastic! The Modern Family actress flaunted her toned figure in a green crop top and a pair of sparkly star printed leggings while holding on to a Women’s March sweater

The TV star has openly admitted in the past to battling a condition named kidney dysplasia.

This means that her kidneys weren’t well developed enough while she was in her mother’s womb, consequently leaving Hyland to feel pain and fatigue.

The normal kidney tissue is replaced with fluid-filled sacs – also known as cysts – and leave an unbearable sensation of pain in the area.

Despite having undergone a kidney transplant at 21, Hyland says she’s still faced with a number of health problems to this day. 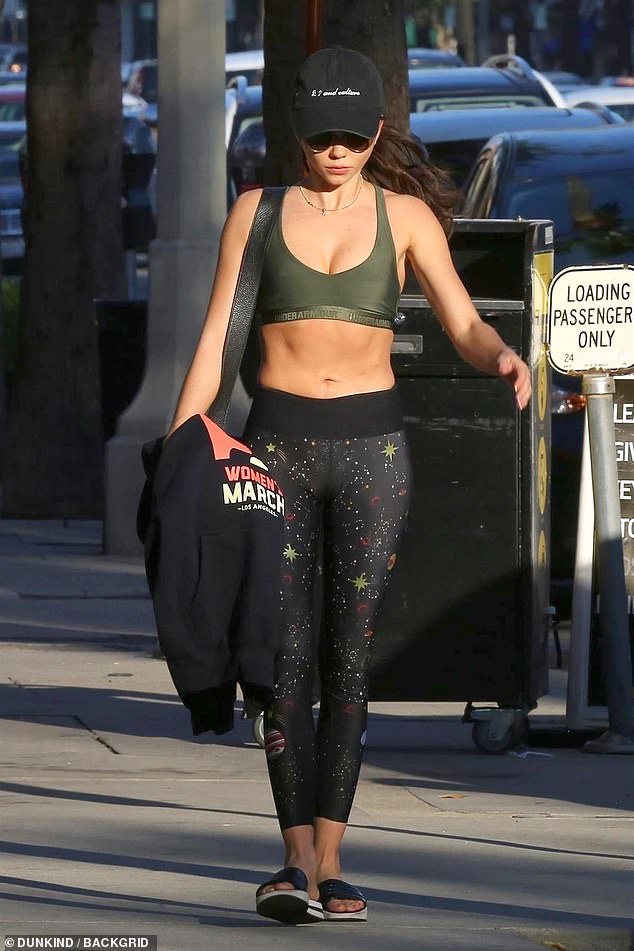 Hoping not to get recognized: In what appeared to be an attempt to go incognito, the 27-year-old had also added a black hat to her ensemble as she returned to her car

Earlier this year, Hyland had used her social media platform to shed light on her health issues while also clearing up rumors claiming that she promotes anorexia because of her petite figure.

In a lengthy statement, the New Yorker hit back stressing that her condition is the reason behind her weight constantly fluctuating.

‘Eat a burger, your head is bigger than your body and that’s disgusting,’ she recalled a stranger telling her on Instagram.

‘And you’re right! … No one’s head should be bigger than their body but considering I’ve basically been on bed rest for the past few months, I’ve lost a lot of muscle mass.’ 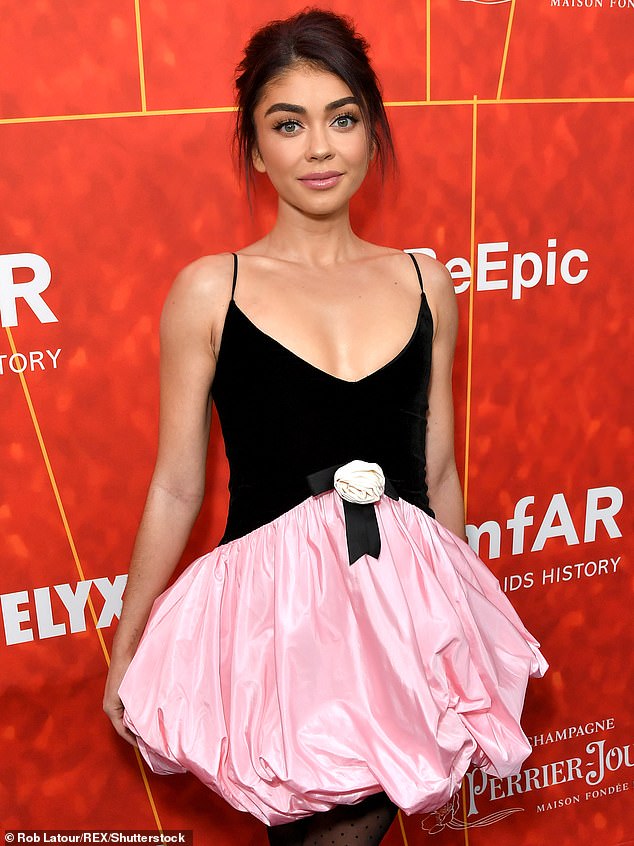 Meanwhile: The TV star showed off results from her plentiful gym sessions as she arrived at the amfAR gala in Los Angeles on Thursday

In an effort to make fans aware of her daily struggle and why dedicates a good amount of her day to her fitness lifestyle is centered on her health.

Hyland continued by stressing that the severity of her condition doesn’t give her the option to choose how much she wants to weigh or how big her head may look to others.

So long as she’s doing her part to remain happy and healthy, that’s all that matters to the Screen Actors Guild Award winner.

‘My circumstances have put me in a place where I’m not in control of what my body looks like. So I strive to be as healthy as possible, as everyone should.’

Researchers feed seaweed to dairy cows to reduce emissions
CBB final: Chloe Ayling endures a VERY awkward reunion with Jermaine Pennant
Vegan activists storm steakhouse and force diners to listen to sounds of slaughter
Minister will NOT crack down on toxic leasehold deals that trap families and blames 'excited' buyers
Pyrolytic cleaning ovens are able to wipe themselves down after a spill
Husband battered his wife to death with a hammer two weeks after being accused of raping her
UK WEATHER more rain and flooding for large parts of Britain ice for Northern Ireland
Elton John places a TENT between himself and his private jet to avoid diva moments photographed