Prince Harry has embraced Australia as much as they have embraced him during his national tour to launch the 2018 Invictus Games.

But there’s one part of the Aussie culture the can’t seem to get behind – the swimwear.

Presented with a pair of green and gold budgie smugglers to sign, the red-headed royal politely declined.

Pictures show three Aussie soldiers begging him to sign the swimwear as it sat on one athlete’s head.

Standing in front of the group, Harry is seen laughing, but did not autograph the trunks. 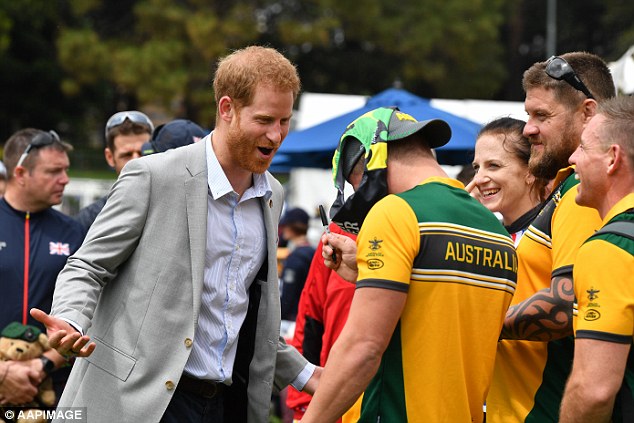 What are those? Prince Harry declined to sign a pair of Budgie Smugglers presented to him by an Australian athlete 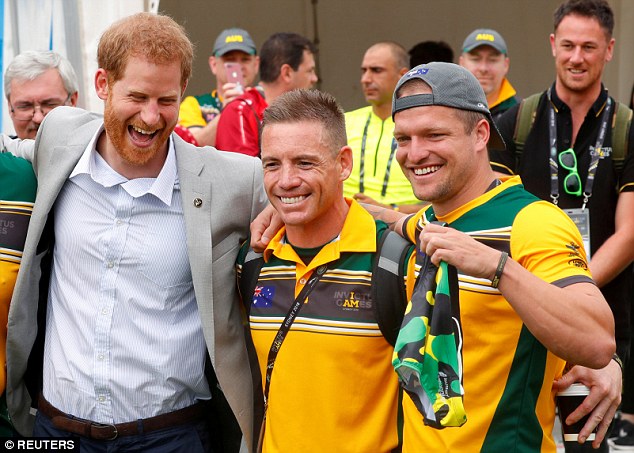 Having a laugh: Despite his refusal, both the soliders and the royal appeared to be in good spirits as they posed with the offending swimwear

Ben Yeomans, Damien Irish and Kent were all smiles and had nothing but praise for the Duke after meeting him on Sunday at the Invictus Games cycling event.

The three Aussie larrikins said they understood it wouldn’t have been a good look in front of the clicking shutters of the worlds press.

‘He was totally conscious of that,’ Mr Kent laughed.

‘We were hoping that he’d try them on, but oh well next time.

‘To be honest he’s so down to earth, one of the boys really.’

Prince Harry may have declined because he’s already been gifted a pair – by paralympian and Triple J presenter Dylan Alcott. 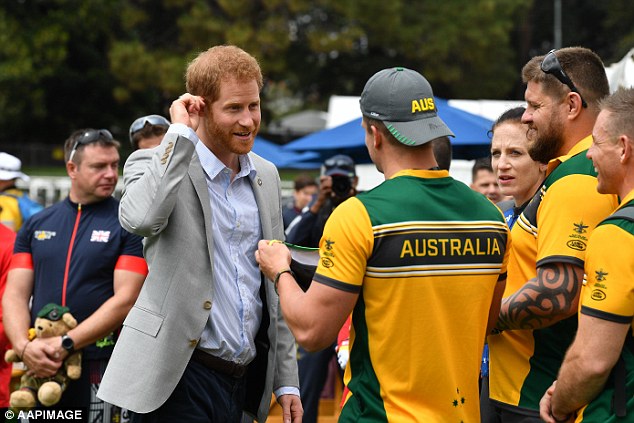 Thanks, but no thanks: The Duke of Sussex was polite in his refusal, and the athletes said they understood it wouldn’t have been a good look in front of the world’s press

The Duke of Sussex was given the swimmers during a private event at Admirality House – the Governor’s residence where he and Meghan Markle are residing in Sydney – and promptly put them on over his jeans.

Dylan Alcott, a host on ABC’s daily round-up of the games, had a private talk with Harry along with Invictus team members Matt Model and co-captain Nicole Bradley.

Mr Alcott, who is a triple Paralympic gold medallist in wheelchair tennis and wheelchair basketball, said: ‘We gave him a gift. One of the athletes, Matt, gave him a pair of budgie smugglers. And he put them on, over his jeans. It looks awesome.

Mr Alcott, who was talking at a reception hosted by the prime minister Scott Morrison at a restaurant in Sydney’s Botanical Gardens, added: ‘I just met the duchess, and he [Harry] said I am the one to blame for the photo. I said, “Hey, sorry!”‘

‘I think [the budgie smugglers] did wonders for him. It looked good. He should make it official! I reckon the Duchess will love them. But who knows? Maybe not. 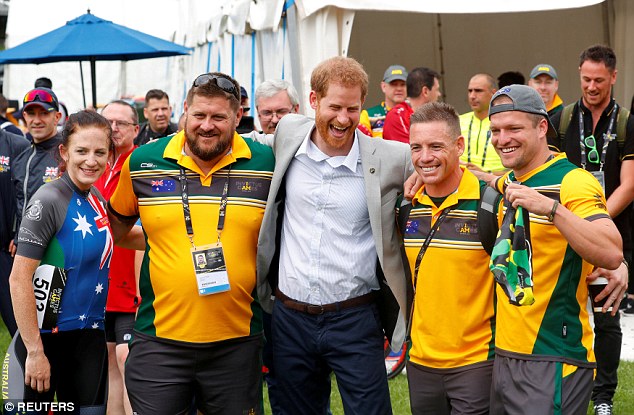 Harry met many of Australia’s Invictus athletes on Sunday, and took the time to speak with them about their experiences and encourage them to get as much as they could out of the games

‘I met the Duchess before, at Wimbledon – I’m the number one wheelchair tennis player in the world. I said, ‘We actually met at Wimbledon.’ She said ‘I remember meeting you at Wimbledon.’ I was pretty happy with that. I felt pretty chuffed that she remembered.’

Alcott said being able to speak in a relaxed and personal setting with the Prince about issues facing veterans and other people with disabilities or who have mental illnesses was incredibly moving.

‘To sit on the lawn, and just have a chat with him about some really important issues, like mainstreaming disability, talking PTSD – what he has done is normalised it a lot, so people feel comfortable,’he said.

‘As someone who has had a disability my whole life, it really meant a lot to me to be able to say thank you. He is such a good bloke.’

At the reception the couple met children from Kookaburra Kids, an organisation which helps children living in families affected by mental health issues.

Lachlan Williams, 10, from Sydney, said: ‘He asked who had parents in the military, and we put up our hands to say yes.’

‘Afterwards I said to them, “My teacher says she loves you”. They laughed.’