The term refers to a technique of opening a car door with the left hand so the driver looks over their shoulder first.

The Dutch reach will be included in the updated Highway Code to provide more protection for cyclists and pedestrians.

In the Netherlands drivers are routinely taught to reach across with the hand furthest away from the door to open it, turning their body so they are forced to look at the road behind them.

For the Dutch this generally means opening with their right hand, because they drive on the right and the driver’s seat is on the left.

Cycling and walking minister Jesse Norman will today announce plans to write it into a new Highway Code, alongside minimum distances drivers should keep from cyclists when overtaking.

Mr Norman said: ‘Britain has some of the safest roads in the world, but we need them to be safer still for all – and particularly for cyclists, pedestrians and other vulnerable road users. Cycling and walking are increasingly being understood as crucial parts of an integrated approach to issues of health, obesity, air quality and town and city planning.

‘But this will only happen if people feel safe on the roads. These measures are part of a steady process of improvement and reform designed to achieve just that.’

One man who might have to brush up on his ‘Dutch reach’ is Chris Grayling. 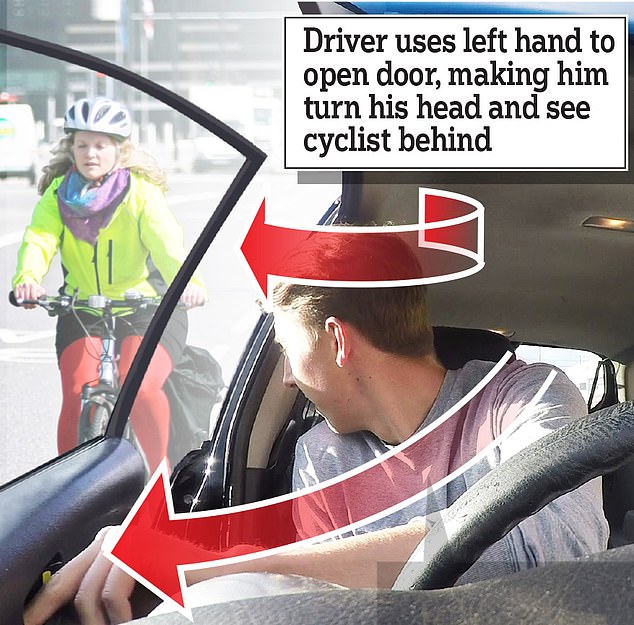 Almost two years ago a video emerged of the Transport Secretary knocking a rider off his bike by opening the door of his ministerial car outside Westminster. Fortunately the cyclist was not injured.

Currently the Highway Code stipulates that drivers should give motorcyclists, cyclists and horse riders ‘at least as much room’ as they would if overtaking a car.

But cycling advocates have complained that this is too vague and is often flouted.

Duncan Dollimore, of Cycling UK, described the Government’s announcement as a ‘significant milestone’ in road safety for cyclists.