A measles outbreak has spread across New York after several people returned from a trip to with the highly contagious disease.

Health officials say six children in Williamsburg, Brooklyn, and 11 children and adults in Rockland County have fallen ill – all in Orthodox Jewish communities.

The Williamsburg cases are all in children ranging from 11 months to four years old while the Rockland County cases are in both children and adults.

Now doctors are imploring residents to have their children vaccinated before the virus continues to spread throughout the state – and potentially out of state. 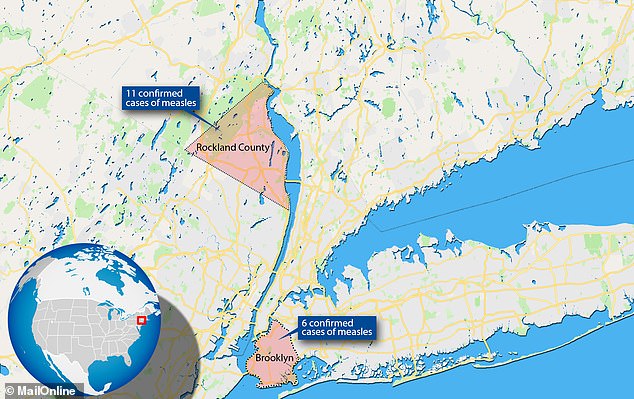 Health officials say six people in Williamsburg, Brooklyn, and 11 people in Rockland County have fallen ill with measles – all in Orthodox Jewish communities

Measles is a highly contagious infection caused by the measles virus.

When someone with measles coughs, sneezes or talks, infected droplets are sprayed into the air, where other people can inhale them and are then infected.

Symptoms present themselves between 10 to 14 days after infection and include fever, cough, runny nose, and a total-body skin rash.

Once common, the disease is now rare due to the MMR (measles, mumps, rubella) vaccine.

The Centers for Disease Control and Prevention (CDC) recommends children receive the first dose at 12 to 15 months old and the second dose at four to six years old.

According to the CDC, as of September 8, 2018, 137 individual cases of measles have been confirmed in 24 states and Washington, DC.

Five of Rockland’s 11 confirmed cases came from people who brought the virus in from out of the country.

The other six patients have secondary cases, meaning they became sick after being exposed to one of the primary patients.

According to Israel’s Ministry of Health, the country is facing a measles outbreak with at least 623 Israelis contracting the virus this year.

Officials in Rockland County say they are seeing its biggest outbreak since the 1990s.

‘As we see the number of cases grow, the potential for further exposure increases as well,’ she said at a press conference on Wednesday afternoon.

‘Measles is a very serious disease and we are looking to limit the spread.’

The New York City Health Department (NYCHD) says that the Brooklyn cases also began after a child returned from a trip to Israel.

Of the six children that are sick, four had been held back voluntarily from vaccines while one child was too young. Another child had received the first dose of the vaccine, but not the second.

The NYCHD says it plans to meet with rabbis and elected officials in Williamsburg on Thursday to talk about the importance of vaccines.

‘Although measles is preventable, too many families are choosing to not vaccinate or delay vaccination, putting their children and other children at risk,’ acting Health Commissioner Dr Oxiris Barbot told .

One member of the Orthodox Jewish community in Williamsburg told the station that there are several residents that believe there is a link between vaccines and autism, a claim that has been debunked by scientists.

‘We have that debate every single day in our synagogues and our community,’ Volvi Einhorn said. ‘And most of our people do get it, and the reckless people who don’t get it have a responsibility and they should take action.’

Twitter, Reddit customers share among the worst tattoos they've seen
Cohen will inform Mueller 'all he is aware of concerning the conspiracy to collude'
Mexicans line up to visit presidential palace opened by Andres Manuel Lopez Obrador
Megyn Kelly hits the ski slopes wearing green shamrock beads as she pays tribute to her Irish father
Tom Hiddleston stars in advert for multi-vitamins Centrum on Asian TV Weibo
Man pleads guilty to killing woman in 1992 after DNA evidence from different cold case led to arrest
25% of Americans snoop on their partner's finances – and women are more likely than men to pry
Hillary Clinton holds out possibility of becoming Vice President in November