A new report has given a failing grade to 22 of the top 25 burger chains in the US due to the use of beef from cows that were fed antibiotics.

Only two chains, Shake Shack and Burger Fi, received As for serving burgers that were made of meat taken from cows that didn’t have medication in their feed.

But 21 other chains, including McDonald’s, Burger King, In-N-Out and Whataburger, received an F ‘for lacking any announced policy to source beef raised without the routine use of antibiotics.’ Wendy’s scraped by with a D minus.

The authors of the 2018 Chain Reaction Report said they hope the findings inspire lawmakers to bring about federal policy changes that reduce routine antibiotic use in the livestock sector. 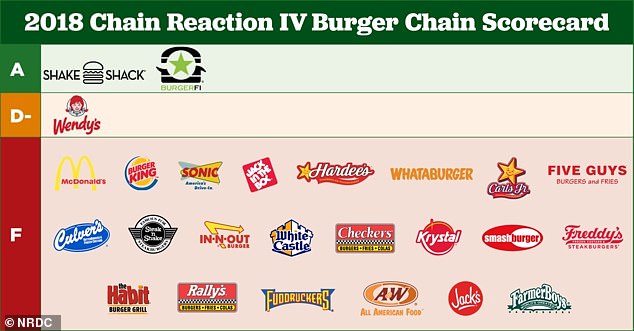 In the 2018 Chain Reaction Report, only two chains, Shake Shack and Burger Fi, received As for serving burgers made with beef from cows that didn’t have antibiotics. Wendy’s received a D minus, and the other 22 chains received an F

Lena Brook, lead researcher of the report and interim director of the food and agriculture program at the Natural Resources Defense Council, one of the organizations that worked on the report, said the group first looked into antibiotics in poultry.

They were encouraged after seeing the reduction of antibiotics in poultry used by fast food restaurants, which led them to look at burgers.

Burgers are one of the most popular – and vilified foods – in the US.

In a report published last year by the US Food and Drug Administration (FDA), it is estimated that 43 percent of medically important antimicrobials were used in cattle while just six percent is put towards chicken and nine percent towards turkeys.

‘It’s an interesting direction to take because we know Americans love their burgers. It’s one of the favorite foods in the US,’ Brook told Daily Mail Online.

‘So we wanted to hone in on food that America loves and the sector that’s buying the beef.’

She added: ‘It was time for us to focus on this sub-sector relative to the supply chain.’

Fast food chains were chosen for the top 25 list by how much they made in US sales.

The restaurants were then judged in three areas: if they had made a pledge or policy to stop using antibiotics, if they were implementing the pledge or policy, and if the NRDC could verify this.

Based on this criteria, Shake Shack and BurgerFi came in as the only two chains found to have a policy in place for serving beef from cows that weren’t fed antibiotics.

THE GROWING THREAT OF SUPERBUGS

Antibiotic resistance occurs when bacteria change to ‘outsmart’ or resist antibiotic medicine, making it close to impossible to treat the infection.

The bacterium that carries resistance genes to many different antibiotics is called a superbug.

Most of these infections occur in hospitals or in medical care facilities, such as nursing homes.

The Centers for Disease Control and Prevention said that more than two million people are infected with antibiotic resistant bacteria every year.

More than 23,000 people die from these infections each year.

Experts say that if the epidemic is not brought under control, superbugs may kill more people than cancer by the year 2050.

There are multiple factors that have contributed to the rise of superbugs:

Brook said she was only slightly surprised by the results, but thought she would see higher grades from smaller chains.

‘They are more dedicated to serving responsibly raised beef so I thought a lot of them might be using antibiotic-free beef.’

Among the chains Brook listed included Smashburger, which was founded in 2007 and has more than 370 locations in the US.

Smaller burger companies that did not make the top 25 list did get honorable mentions including Elevation Burger and Burger Lounge, both which have no more than 50 US locations and serve beef raised without antibiotics.

Wendy’s received a D minus for purchasing 15 percent of its beef supply from a producer that has reduced the use of an antibiotic, tylosin, by 20 percent.

The authors state that the policy is ‘far from comprehensive’ but ‘a positive step forward’.

The other 22 chains received an F. McDonald’s spokeswoman Lauren Altim said that, as of 2016, the restaurant does not serve chicken raised with antibiotics and that it is currently finalizing a policy for beef that will be implemented by the end of 2018.

‘Preserving the effectiveness of antibiotics for future generations is highly important to McDonald’s,’ she added.

In the same vein, In-N-Out said in 2016 that it intended to source beef raised without antibiotics but the researchers say the company ‘has yet to follow through with a time-bound commitment or provide any updates on its progress.’

According to the Centers for Disease Control and Prevention, more than two million people are infected with antibiotic resistant bacteria every year.

More than 23,000 people die from these infections each year.

Antibiotic resistance occurs when bacteria change to ‘outsmart’ or resist antibiotic medicine, making it close to impossible to treat the infection.

The bacterium that carries resistance genes to many different antibiotics is called a superbug.

The growth of antibiotic resistance has been driven by several factors including the over-prescription of drugs for viruses, (which are not a bacterium and therefore ineffective in treatment), incorrect prescriptions and doses, and the drugs’ use in agriculture. 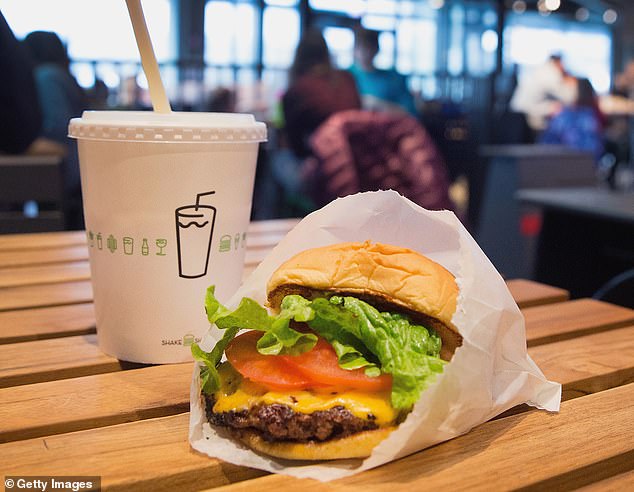 The restaurants were judged in three areas: if they had made a pledge or policy to stop using antibiotics, if they were implementing the pledge or policy , and if the NRDC could verify this. Pictured: a burger and soft drink at Shake Shack 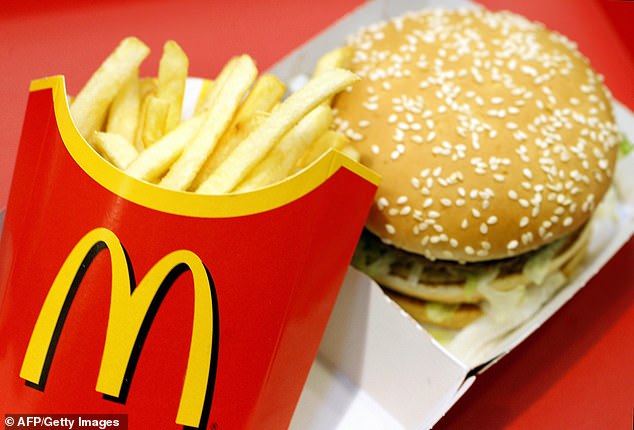 McDonald’s spokeswoman Lauren Altim said that the restaurant does not serve chicken raised with antibiotics and that it is currently finalizing a policy for beef that will be implemented by the end of 2018. Pictured: a McDonald’s Big Mac and french fries

The World Health Organization says antibiotic resistance has ‘accelerated’ due to the misuse of antibiotics, in both humans and animals.

Antibiotics are not just used to treat sick animals, but also to help them grow faster and to prevent disease before it even strikes.

Last month, the FDA unveiled a five-year plan to reduce the use of antibiotics in animal production.

Steps include the medications only being used at the advice of licensed veterinarians or when livestock is ill.

‘The next step is to set in place a federal policy that bans antibiotics so that they are only used when animals are sick,’ Brook said.

‘Right now we don’t even have a set goal for reduction in the livestock sector. I’m really grateful for the progress we made in the poultry companies. If it’s translated into beef supplies, then we can create a domino effect.’

She added that consumers have real power to make companies listen.

‘What I always like to tell readers and eaters is that their voice really matters. If they eat at those companies receiving As, let all the restaurant managers know because they like hearing from you,’ Brook said.

‘If they’re eating at restaurants that are receiving an F, they then ought to send a message to these restaurant managers stating their concerns.’

Geoffrey Owens lands second job on NCIS: New Orleans
Trump confirms that his chief of staff John Kelly will be out by the end of the year
Empire star's family calls for justice in 'homophobic hate crime'
The miracle $49.95 oil that banished little girl's severe eczema in just ONE day
American Airlines mechanic accused of sabotaging a Florida plane with 150 passengers on board
Mom turns her baby into a ZOMBIE for an incredible daddy-daughter photoshoot
Police hunt for man and woman suspected of 'stabbing a man to death' at DC metro station
Seth Meyers, Stephen Colbert and Jimmy Fallon suspend shows amid New York coronavirus epidemic