LAS VEGAS (AP) – Nevada’s most famous pimp tried to bring the state’s legal brothel industry into the mainstream by mingling with celebrities, showcasing his business on HBO and staging outlandish publicity stunts.

Dennis Hof’s fame made him an attention-grabbing figure in an otherwise quiet industry. And, despite being found dead on Tuesday, he’s poised to win an election to the state Legislature in less than three weeks.

Hof, who starred in the HBO reality series “Cathouse,” marketed himself as a Donald Trump-style Republican in his race for a heavily GOP Assembly district that includes wide stretches of desert where nuclear bombs were once tested.

No foul play is suspected, and it could be six weeks before a cause of death is determined, authorities said.

In the meantime, it’s too late to change the ballots, which have already been printed and mailed. Voting begins Saturday. Even though officials will post notices at the polls that Hof died, he seems likely to get elected. 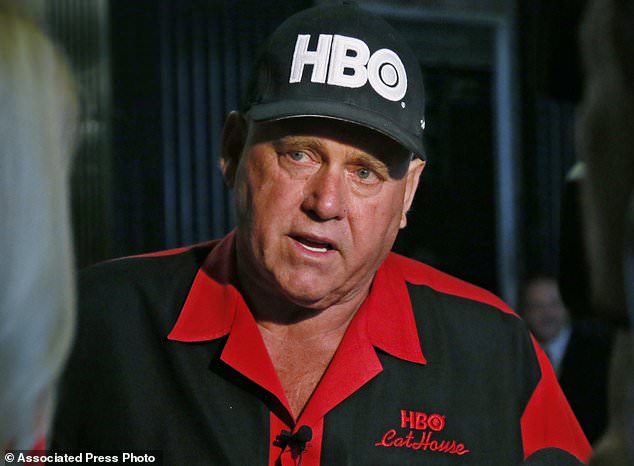 FILE – In this June 13, 2016, file photo, Dennis Hof, owner of the Moonlite BunnyRanch, a legal brothel near Carson City, Nev., is pictured during an interview during a break in the trial of Denny Edward Phillips and Russell Lee Hogshooter in Oklahoma City. Nevada authorities said Tuesday, Oct. 16, 2018, that Hof, a legal pimp who has fashioned himself as a Donald Trump-style Republican candidate has died. (AP Photo/Sue Ogrocki, File)

“Just when I thought that there was nothing else in this race that could possibly shock me, here we are,” Hof’s campaign consultant, Chuck Muth, said Wednesday.

Waging a no-holds-barred campaign, Hof’s incendiary style drew fans and well-known supporters such as Trump adviser Roger Stone and Arpaio. But it also brought scrutiny to Hof’s businesses and alienated him from the state’s GOP establishment.

Nevada is the only state to allow legal prostitution, which occurs at about 20 licensed brothels in mostly rural areas.

Most brothel owners keep a low profile, offering few interviews and buying only subtle advertising. But Hof had a penchant for splashy billboards and stunts that included helping several women “auction” their virginity.

Hof made an unsuccessful run for the Statehouse in 2016 as a Libertarian. Then this past summer, he ousted a three-term incumbent Republican in the primary after putting up billboards advertising his rival’s arrest for disorderly conduct three decades prior and sending campaign emails with a candid picture of the man slumped and asleep in a chair.

After Hof’s win, establishment Republicans refused to back him, including U.S. Sen. Dean Heller, who is in a tight re-election race, and Nevada Attorney General Adam Laxalt, who is in a close battle for the governor’s mansion.

Hof then put up a billboard that declared “Laxalt-Hof-Heller” as “the winning team” and said that, if elected, he would set up a luxury motor coach in front of the Carson City Capitol building offering liquor and “free shoulder massages.”

“It’s too bad that he didn’t get to see this through,” Fleiss told reporters Tuesday. “He saw it as going all the way to governor one day.”

The Assembly district Hof was running in has long been held by Republicans. His Democratic opponent, Las Vegas educator Lesia Romanov, has little visible presence in Nye County, where most of the district is.

Billing himself as “the Trump of Pahrump,” Hof wrote a memoir in 2015 titled “The Art of the Pimp,” akin to Trump’s book “The Art of the Deal.” After winning the primary, he credited the president with paving the way by proving a candidate could upend establishment politics and win.

Trump “was the Christopher Columbus for me,” Hof told The Associated Press. “He found the way and I jumped on it.”

Hof, who was born in Phoenix in 1946, owned several gas stations and other small businesses before moving to Nevada in the 1970s.

He had two daughters, who are both adults and were estranged from him for years, Muth said. Hof also had an ex-wife, but Muth did not know her whereabouts or details about her.

In 1992, Hof bought his first brothel and eventually grew his empire to six, including an Area 51-themed brothel. He began selling some of the properties this year as he faced regulatory problems in southern Nevada and a push to outlaw licensed bordellos in the two counties where he operated.

Hof said he was downsizing to focus on politics, which he called “a dirty business.” He said the anti-brothel push, the regulatory problems and multiple allegations of sexual assault against him were politically motivated.

Three of the allegations from prostitutes never resulted in charges. Few details have been released about a fourth allegation that the Nevada Department of Public Safety has been investigating. It was made in September by a woman who reported at a hospital that Hof had raped her.

Hof denied all of the accusations.

Sheriff’s deputies removed the license from the brothel where his body was found. Because Hof was the only person listed on the license, the brothel cannot operate until a new owner applies for the permit, Nye County spokesman Arnold Knightly said Wednesday.

Hof’s longtime madam and company financial officer were expected to apply for the license, Muth said. The madam, Suzette Cole, did not respond to a text message seeking comment Wednesday.

As for his four northern Nevada brothels, they had other names on the business licenses and were still operating Wednesday, Lyon County Manager Jeff Page said. 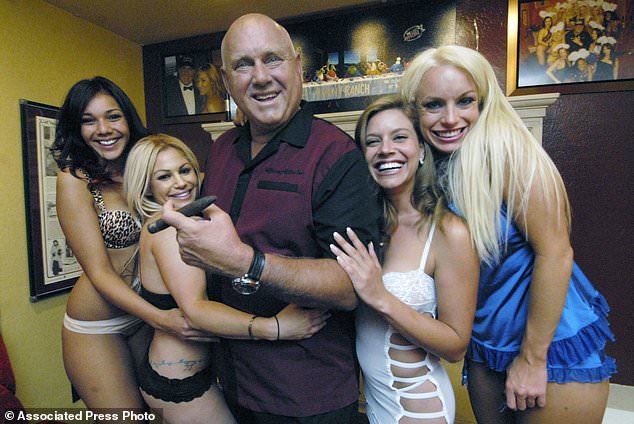 FILE – In this June 26, 2008, file photo, owner Dennis Hof poses with some of his “working girls” in the parlor of his Moonlite BunnyRanch in Mound House, east of Carson City, Nev. Hof, a legal pimp who has fashioned himself as a Donald Trump-style Republican candidate has died, Nevada authorities said Tuesday, Oct. 16, 2018. (Lisa J. Tolda/The Reno Gazette-Journal via AP, File) 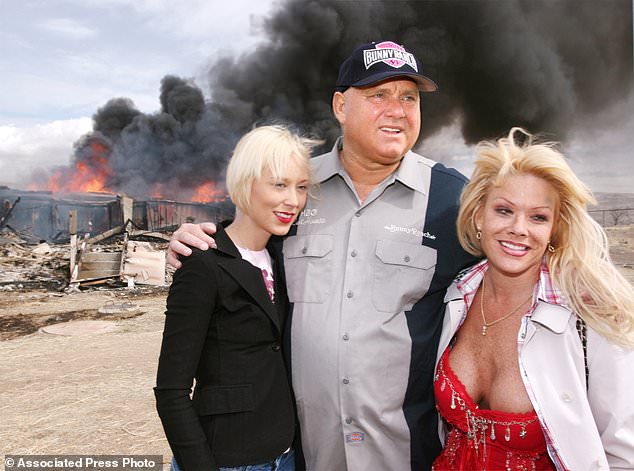 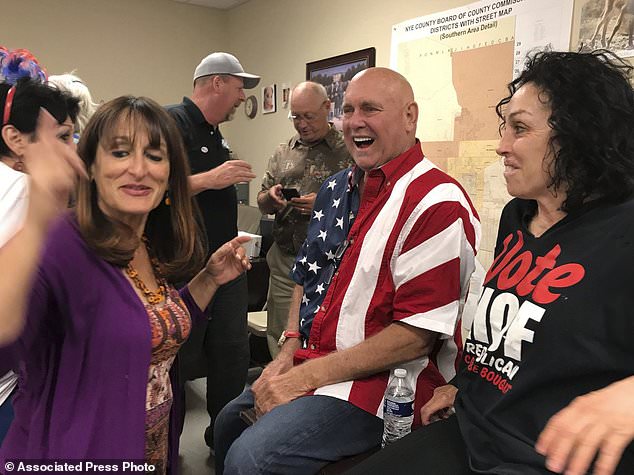 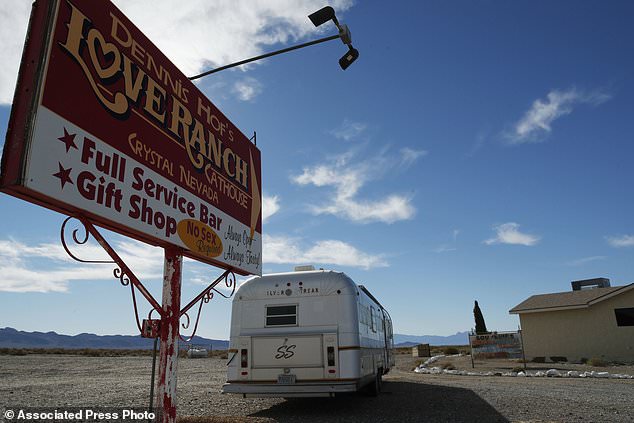 A sign advertises the Love Ranch outside of the brothel, Tuesday, Oct. 16, 2018, in Pahrump, Nev. Dennis Hof, a legal pimp and Republican candidate has died at the brothel according to Nevada authorities. (AP Photo/John Locher) 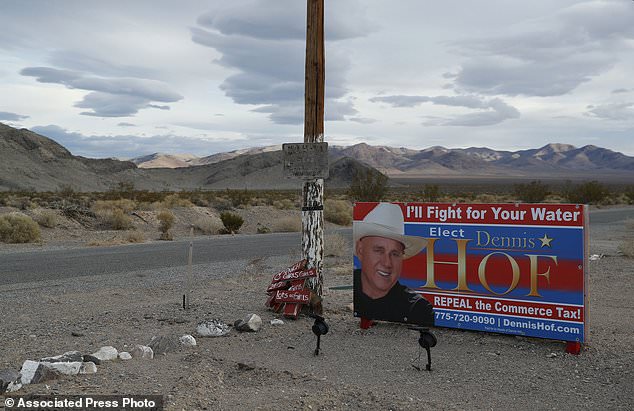 An election sign for Nevada brothel owner Dennis Hof is on display near the Love Ranch brothel, Tuesday, Oct. 16, 2018, in Pahrump, Nev. Hof, a legal pimp and Republican candidate has died according to Nevada Authorities. (AP Photo/John Locher) 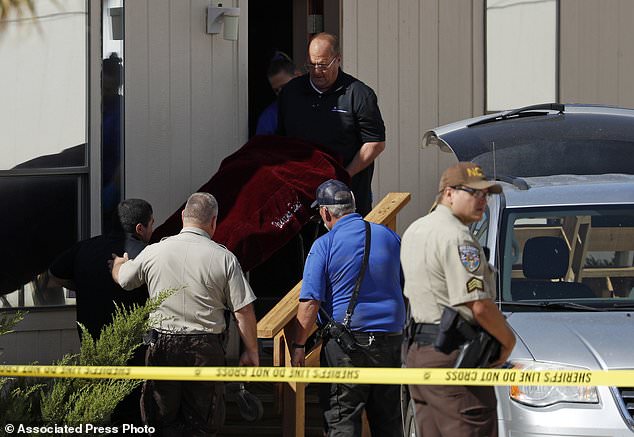 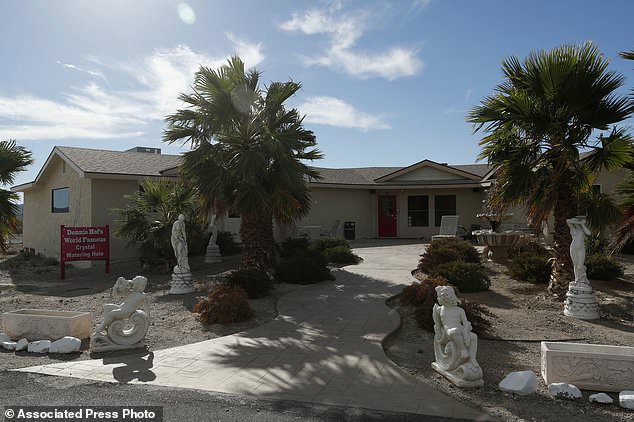 The Love Ranch brothel is seen, Tuesday, Oct. 16, 2018, in Pahrump, Nev. Dennis Hof, a legal pimp who gained notoriety for an HBO series about his brothel business and who fashioned himself as a Donald Trump-style Republican candidate for the state Legislature, was found dead hours after his 72nd birthday bash, authorities said Tuesday. (AP Photo/John Locher) 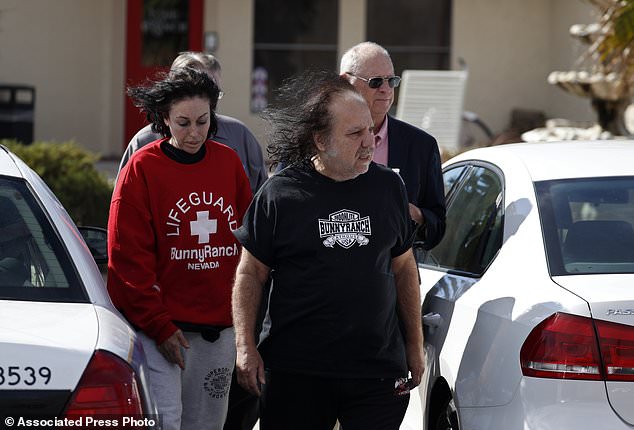 Police examine footage of boy in China who's seen driving on a motorway at greater than 40mph
Police car knocks over and kills pedestrian as it races to 999 call in the early hours
Owner of $2.2million house in Auckland faces legal nightmare as tenants lock themselves inside
Monika Radulovic reveals the workout secrets to her incredible bikini body
Viewers are stunned by ‘loved up’ Boris Johnson’s makeover
ISIS zealots face final assault as coalition forces close in on desperate jihadists
Epstein's 'sex slave' Virginia Roberts gathers driftwood on a beach in Australia
Dr Clare Gerada describes her experience with coronavirus